In Amazon Cloud Directory, it’s often necessary to add new objects or add relationships between new objects and existing objects to reflect changes in a real-world hierarchy. With Cloud Directory, you can make these changes efficiently by using batch references within batch operations.

Let’s say I want to take an existing child object in a hierarchy, detach it from its parent, and reattach it to another part of the hierarchy. A simple way to do this would be to make a call to get the object’s unique identifier, another call to detach the object from its parent using the unique identifier, and a third call to attach it to a new parent. However, if I use batch references within a batch write operation, I can perform all three of these actions in the same request, greatly simplifying my code and reducing the round trips required to make such changes.

In this post, I demonstrate how to use batch references in a single write request to simplify adding and restructuring a Cloud Directory hierarchy. I have used the AWS SDK for Java for all the sample code in this post, but you can use other language SDKs or the AWS CLI in a similar way.

In my previous post, I demonstrated how to add AnyCompany’s North American warehouses to a global network of warehouses. As time passes and demand grows, AnyCompany launches multiple warehouses in North American cities to fulfill customer orders with continued efficiency. This requires the company to restructure the network to group warehouses in the same region so that the company can apply similar standards to them, such as delivery times, delivery areas, and types of products sold.

For instance, in the NorthAmerica object (see the following diagram), AnyCompany has launched two new warehouses in the Phoenix (PHX) area: PHX_2 and PHX_3. AnyCompany wants to add these new warehouses to the network and regroup them with existing warehouse PHX_1 under the new node, PHX.

The state of the hierarchy before this regrouping is shown in the following diagram, where I added the NorthAmerica warehouses (also represented as NA in the diagram) to the larger network of AnyCompany’s warehouses. 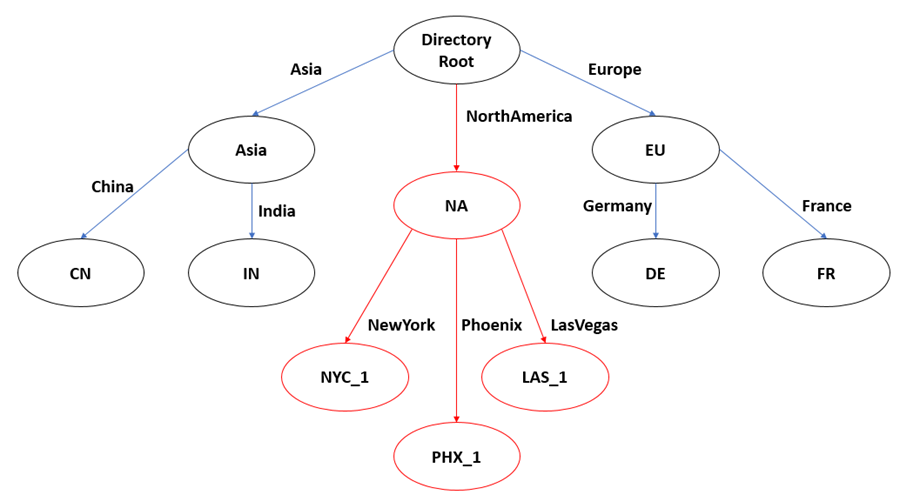 Adding and grouping new warehouses in the NorthAmerica network

I want to add and group the new warehouses with a single request, and using batch references in a batch write lets me do that. A batch reference is just another way of using object references that you are allowed to define arbitrarily. This allows you to chain operations, which means using the return value from one operation in a subsequent operation within the same batch write request

To add and group the new warehouses, I will take advantage of batch references to sequentially:

The following code example achieves these changes in a single batch by using references. First, the code sets up a createObjectPHX operation to create the PHX parent object and attach it to the parent NorthAmerica object. It then sets up createObjectPHX_2 and createObjectPHX_3 and attaches these new objects to the new PHX object. The code then sets up a detachObject to detach the current PHX_1 object from its parent and assign it to a batch reference. The last operation uses that same batch reference to attach the PHX_1 object to the newly created PHX object. The code example orders these steps sequentially in a batch write operation.

In the preceding code example, I use the batch reference, referenceToPHX_1, in the same batch write operation because I do not have to know the object identifier of that object. If I couldn’t use such a batch reference, I would have to use separate requests to get the PHX_1 identifier, detach it from the NA node, and then attach it to the new PHX node.

I now have the network configuration I want, as shown in the following diagram. I have used a combination of batch operations with batch references to bring new warehouses into the network and regroup them within the same local group of warehouses. 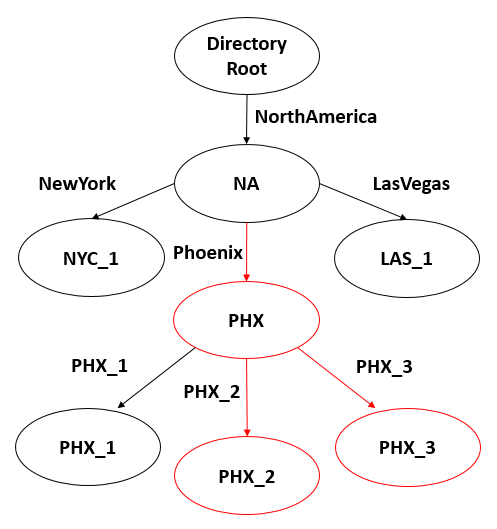 If you have comments about this post, submit them in the “Comments” section below. If you have implementation questions, start a new thread on the Directory Service forum.