For many startups, the key to surviving and thriving is not just having a great idea and funding that idea. It’s also the ability to quickly get to market and being nimble enough to rapidly adjust your product or service to meet the market’s needs. While getting to market fast is great, it is also important to bring to the market what your customers need versus what you think they want. This requires a mindset change from building products or services for months or years in stealth mode before going to market to a more collaborative approach of quickly getting your product or service into your customers’ hands and iteratively improving the product or service based on their feedback.

In this post, we look at some of the methods that startups take to support this customer-driven development approach and the services AWS provides to support these methods.

“A key principle of the Lean Startup method that guides you to the right product with the right set of features is the iterative process of the build–measure–learn feedback loop. At the heart of this process is the minimum viable product (MVP).” 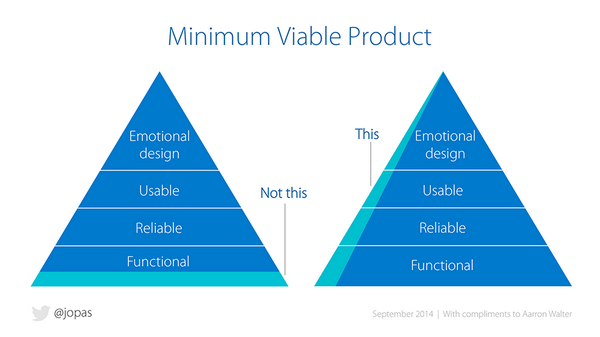 Eric Ries, the author of The Lean Startup, describes the MVP in this way:

“That product which has just those features and no more that allows you to ship a product that early adopters see and, at least some of whom resonate with, pay you money for, and start to give you feedback on.”

To quickly incorporate customer feedback into the MVP and accelerate time to market, you need to minimize the amount of time it takes to go through the build–measure–learn feedback loop. By adopting agile development techniques that lend themselves to the iterative nature of the build–measure–learn process, you can allow for the rapid development of incremental updates to the MVP, leading to shorter feedback loops.

Use the following lean development principles to drive faster acceleration through the build–measure–learn feedback loop:

Embracing agile development allows a development team to quickly create releases that incorporate new or updated features that are driven by customer feedback. This increased velocity in the number of releases requires a corresponding increase in the throughput of releases through the test and deploy steps of the release process. Increasing the throughput through the test and deploy steps, which is sometimes referred to as the “last mile,” can be achieved by automating the steps in the last mile using continuous delivery.

With continuous delivery, the cycle time from when a change is made in development to when the change is staged and ready for production is compressed. The compression is achieved by automating the build, deploy, and test steps in the release process.

Implementing continuous delivery requires setting up a deployment pipeline that models the release process as stages. The stages represent the automated build, test, and deployment steps in the process.

AWS provides a number of services and integrations with third-party tools that support creating the deployment pipeline and processing changes as they flow through the pipeline. AWS CodePipeline is the primary service for supporting continuous delivery on the AWS platform.

Once you set up your pipeline, AWS CodePipeline will detect any newly checked-in change to the version control system (VCS) associated with the pipeline, build the change, and deploy and test the change in each of the test stages in the pipeline before deploying the change into production.

The following illustration shows the main stages in a pipeline: source, build, staging, and production. 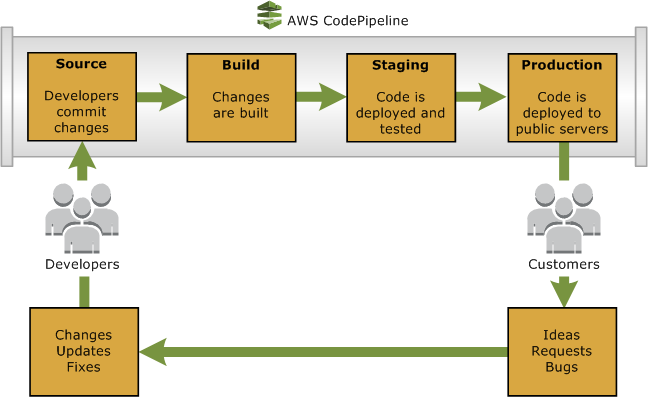 Staging Stage
The staging stage is a testing stage and defines the actions required to automate the deployment and testing of the changes in the pipeline. The pipeline can have one or more test stages, with each stage representing a different phase of testing, such as UAT, exploratory, or stress.

AWS CodePipeline gives you the option of using either AWS CodeDeploy or AWS Elastic Beanstalk to deploy the changes to the test environment associated with the test stage. You can also create custom actions to allow your existing deployment tools to perform the deployment.

AWS CodePipeline supports a number of built-in integrations with third-party automated testing services — including Apica, Blazemeter, Ghost Inspector, or Runscope — for executing automated tests against the test environments associated with the test stages in the pipeline. You can also create custom actions to allow your existing test automation tools to execute automated tests.

AWS has a number of services that you can use to automate deployments, including AWS Elastic Beanstalk, AWS CodeDeploy, AWS OpsWorks, and AWS CloudFormation.

The question “Which of these services should I use?” often comes up. Although the services have some overlap in functionality, each service has specific use cases that make it the optimal choice for automating a deployment.

In this section, we briefly describe the services and provide guidance about selecting a particular service for a particular type of deployment. Let’s start with AWS Elastic Beanstalk and AWS CodeDeploy, both of which have integrations with AWS CodePipeline.

AWS Elastic Beanstalk can provision and deploy to application servers running the following:

AWS Elastic Beanstalk is a good fit for deploying web or application servers based on one of its supported development stacks, such as WordPress sites on IIS or Apache HTTP Server.

Unlike AWS Elastic Beanstalk, which provisions the target environment, AWS CodeDeploy does not support provisioning the target environment as a step in the deployment process. Instead, the service requires that the target server is provisioned before starting a deployment. AWS CodeDeploy is language and stack agnostic and can be used to deploy changes to any application stack that runs on Amazon Linux, Red Hat Enterprise Linux, Ubuntu, and Windows on servers that are on-premises or on AWS.

AWS CodeDeploy also supports using Puppet, Ansible, Saltstack, and Chef to perform the configuration of the target server as part of the deployment process.

If the deployment of your application requires rolling updates across an existing fleet of AWS EC2 instances and/or on-premises servers, then AWS CodeDeploy would be a good fit.

Unlike AWS Elastic Beanstalk and similar to AWS CodeDeploy, AWS OpsWorks is language and stack agnostic. You can use it to deploy changes to any application stack that runs on any of the operating systems supported by AWS OpsWorks (both on-premises and on AWS).

AWS OpsWorks also supports more complex deployment scenarios by letting you model the architecture of your target environment by creating a stack that is made up of layers. The layers are associated with EC2 instances and provide the blueprint for configuring the instances using Chef recipes. AWS OpsWorks comes with a number of built–in layers such as HAProxy, Memcached, and NodeJS App Server. AWS OpsWorks also allows you to create your own custom layers with your own Chef recipes.

If an application requires complex, multilayer deployment and/or is being deployed to a stack not supported by AWS Elastic Beanstalk, AWS OpsWorks would be a good fit. While AWS CodePipeline does not have built-in support for AWS OpsWorks, it supports creating custom actions to allow the use of AWS OpsWorks as a deployment option in your pipeline.

Accelerating software delivery by shortening the cycle time from when a feature is envisioned to when the feature is deployed in production requires automation.

AWS CodePipeline is integrated with AWS CodeDeploy and AWS Elastic Beanstalk for automated deployments and supports a number of additional third-party tools to support automating building, testing, and deploying changes.

AWS has a number of services that can be used for deployments. Although there is some overlap in functionality, each has specific use cases.

For more information, see the whitepaper Overview of Deployment Options for AWS.