AWS CodePipeline is a continuous integration and continuous delivery service for fast and reliable application and infrastructure updates. It offers powerful integration with other AWS services, such as AWS CodeBuild, AWS CodeDeploy, AWS CodeCommit, AWS CloudFormation and with third-party tools such as Jenkins and GitHub. These services make it possible for AWS customers to successfully automate various tasks, including infrastructure provisioning, blue/green deployments, serverless deployments, AMI baking, database provisioning, and release management.

Developers have been able to use CodePipeline to build sophisticated automation pipelines that often require a single CodePipeline action to perform multiple tasks, fork into different execution paths, and deal with asynchronous behavior. For example, to deploy a Lambda function, a CodePipeline action might first inspect the changes pushed to the code repository. If only the Lambda code has changed, the action can simply update the Lambda code package, create a new version, and point the Lambda alias to the new version. If the changes also affect infrastructure resources managed by AWS CloudFormation, the pipeline action might have to create a stack or update an existing one through the use of a change set. In addition, if an update is required, the pipeline action might enforce a safety policy to infrastructure resources that prevents the deletion and replacement of resources. You can do this by creating a change set and having the pipeline action inspect its changes before updating the stack. Change sets that do not conform to the policy are deleted.

This use case is a good illustration of workflow-driven pipeline actions. These are actions that run multiple tasks, deal with async behavior and loops, need to maintain and propagate state, and fork into different execution paths. Implementing workflow-driven actions directly in CodePipeline can lead to complex pipelines that are hard for developers to understand and maintain. Ideally, a pipeline action should perform a single task and delegate the complexity of dealing with workflow-driven behavior associated with that task to a state machine engine. This would make it possible for developers to build simpler, more intuitive pipelines and allow them to use state machine execution logs to visualize and troubleshoot their pipeline actions.

The source code for the sample pipeline, pipeline actions, and state machine used in this post is available at https://github.com/awslabs/aws-codepipeline-stepfunctions.

This figure shows the components in the CodePipeline-Step Functions integration that will be described in this post. The pipeline contains two stages: a Source stage represented by a CodeCommit Git repository and a Prod stage with a single Deploy action that represents the workflow-driven action.

The sample state machine used in this post is a simplified version of the use case, with emphasis on infrastructure deployment. The state machine will follow distinct execution paths and thus have different outcomes, depending on:

Let’s dive into each of these execution paths.

The Deploy state machine is shown here. It is triggered by the Lambda function using the following input parameters stored in an S3 bucket. 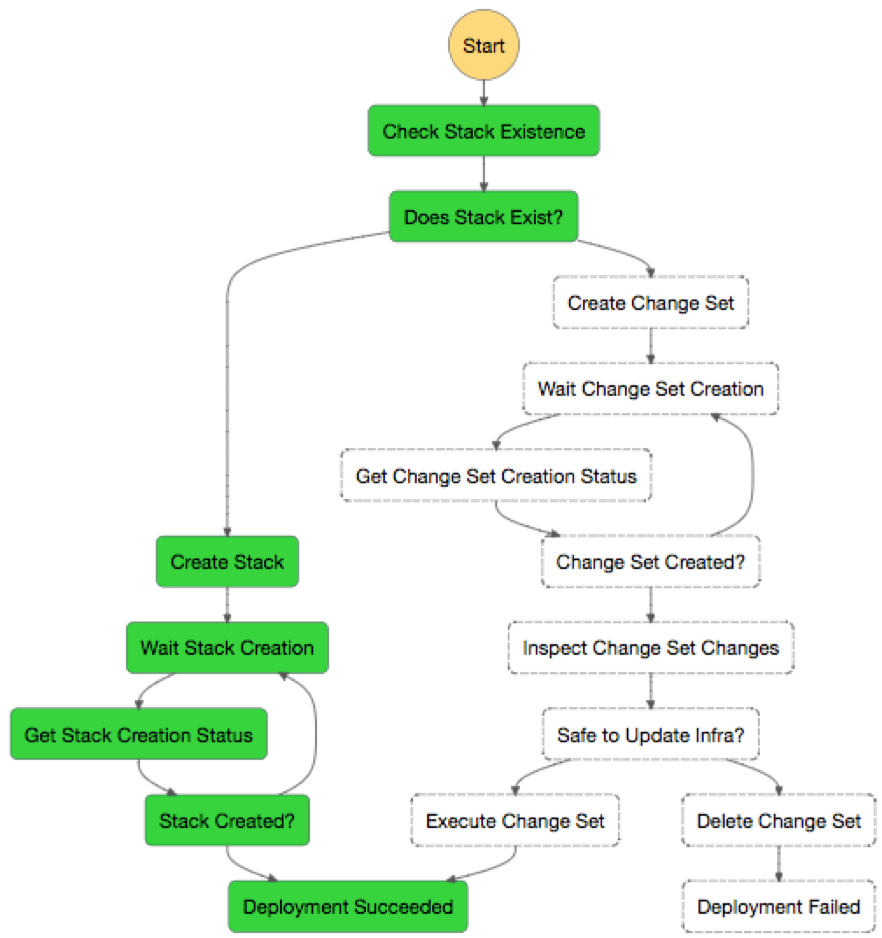 Note that some values used here are for the use case example only. Account-specific parameters like revisionS3Bucket and revisionS3Key will be different when you deploy this use case in your account.

These input parameters are used by various states in the state machine and passed to the corresponding Lambda functions to perform different tasks. For example, stackName is used to create a stack, check the status of stack creation, and create a change set. The environmentName represents the environment (for example, dev, test, prod) to which the code is being deployed. It is used to prefix the name of stacks and change sets.

The first stage in the state machine is “Check Stack Existence”. It checks whether a stack with the input name specified in the stackName input parameter already exists. The output of the state adds a Boolean value called doesStackExist to the original state machine input as follows:

If the stack does not exist, the states illustrated in green in the preceding figure are executed. This execution path creates the stack, waits until the stack is created, checks the status of the stack’s creation, and marks the deployment successful after the stack has been created. Except for “Stack Created?” and “Wait Stack Creation,” each of these stages invokes a Lambda function. “Stack Created?” and “Wait Stack Creation” are implemented by using the built-in choice state (to decide which path to follow) and the wait state (to wait a few seconds before proceeding), respectively. Each stage adds the results of their Lambda function executions to the initial input of the state machine, allowing future stages to process them.

Path 2: Safely Update a Stack and Mark Deployment as Successful 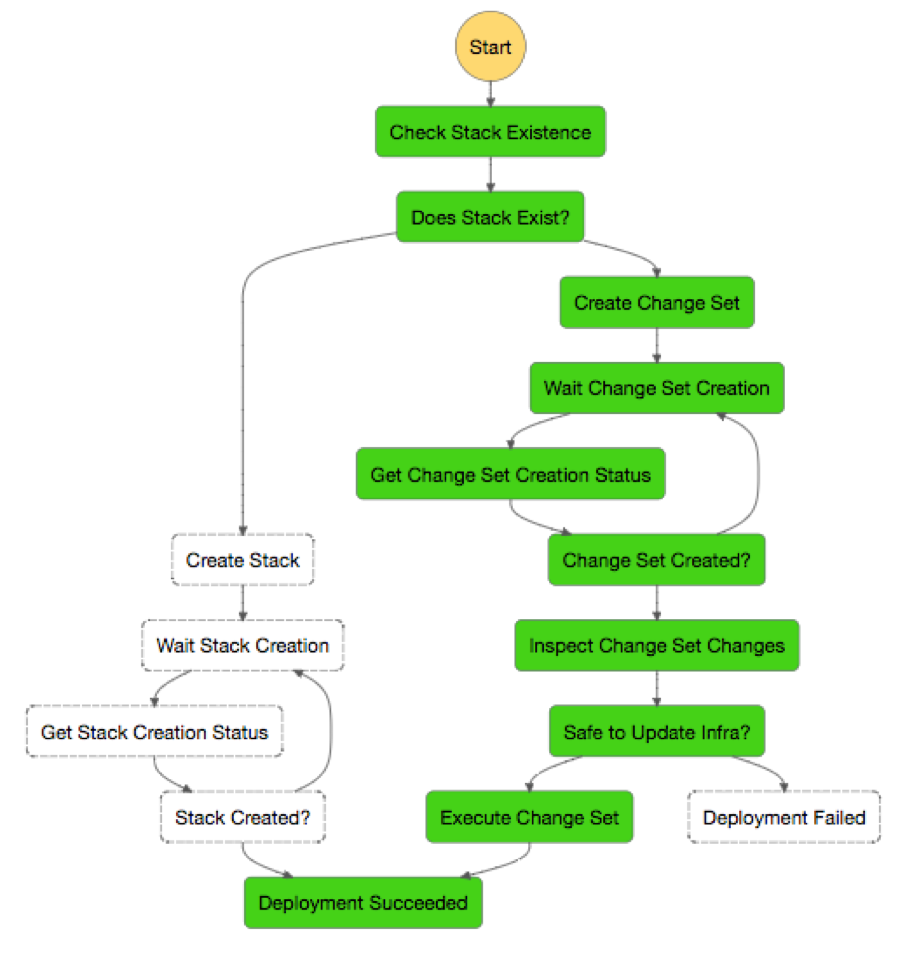 The inspection procedure represented by the “Inspect Change Set Changes” stage consists of parsing the resources affected by the change set and checking whether any of the existing resources are being deleted or replaced. The following is an excerpt of the algorithm, where changeSetChanges.Changes is the object representing the change set changes:

The algorithm returns different values to indicate whether the change set can be safely executed (CAN_SAFELY_UPDATE_EXISTING_STACK or RESOURCES_BEING_DELETED_OR_REPLACED). This value is used later by the state machine to decide whether to execute the change set and update the stack or interrupt the deployment.

The output of the “Inspect Change Set” stage is shown here.

At this point, these parameters have been added to the state machine’s original input:

The “Safe to Update Infra?” step is a choice state (its JSON spec follows) that simply checks the value of the changeSetAction parameter. If the value is equal to “CAN-SAFELY-UPDATE-EXISTING-STACK“, meaning that no resources will be deleted or replaced, the step will execute the change set by proceeding to the “Execute Change Set” state. The deployment is successful (the state machine completes its execution successfully). 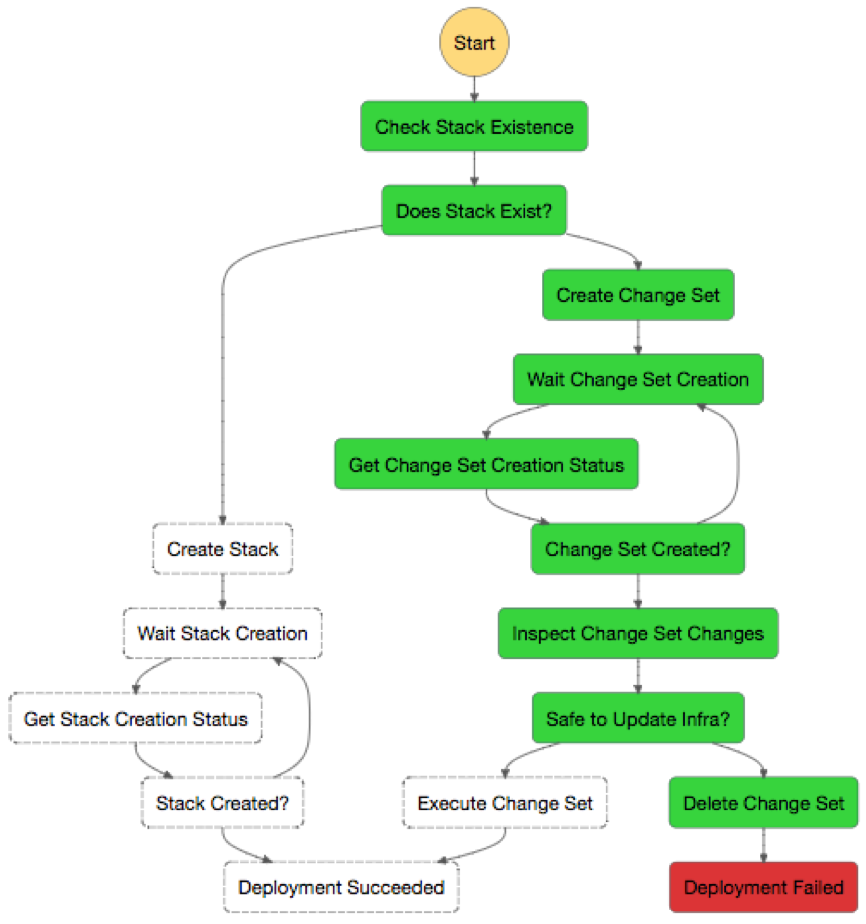 If the changeSetAction parameter is different from “CAN-SAFELY-UPDATE-EXISTING-STACK“, the state machine will interrupt the deployment by deleting the change set and proceeding to the “Deployment Fail” step, which is a built-in Fail state. (Its JSON spec follows.) This state causes the state machine to stop in a failed state and serves to indicate to the Lambda function that the pipeline deployment should be interrupted in a fail state as well.

In all three scenarios, there’s a state machine’s visual representation available in the AWS Step Functions console that makes it very easy for developers to identify what tasks have been executed or why a deployment has failed. Developers can also inspect the inputs and outputs of each state and look at the state machine Lambda function’s logs for details. Meanwhile, the corresponding CodePipeline action remains very simple and intuitive for developers who only need to know whether the deployment was successful or failed.

The Trigger Lambda function is invoked directly by the Deploy action in CodePipeline. The CodePipeline action must pass a JSON structure to the trigger function through the UserParameters attribute, as follows:

This behavior is especially useful for developers who are building and debugging a new state machine because a bug in the state machine can potentially leave the pipeline action hanging for long periods of time until it times out. The Trigger Lambda function prevents this.

Also, by having the Trigger Lambda function as a means to decouple the pipeline and state machine, we make the state machine more reusable. It can be triggered from anywhere, not just from a CodePipeline action.

The Pipeline in CodePipeline

Our sample pipeline contains two simple stages: the Source stage represented by a CodeCommit Git repository and the Prod stage, which contains the Deploy action that invokes the Trigger Lambda function. When the state machine decides that the change set created must be rejected (because it replaces or deletes some the existing production resources), it fails the pipeline without performing any updates to the existing infrastructure. (See the failed Deploy action in red.) Otherwise, the pipeline action succeeds, indicating that the existing provisioned infrastructure was either created (first run) or updated without impacting any resources. (See the green Deploy stage in the pipeline on the left.) 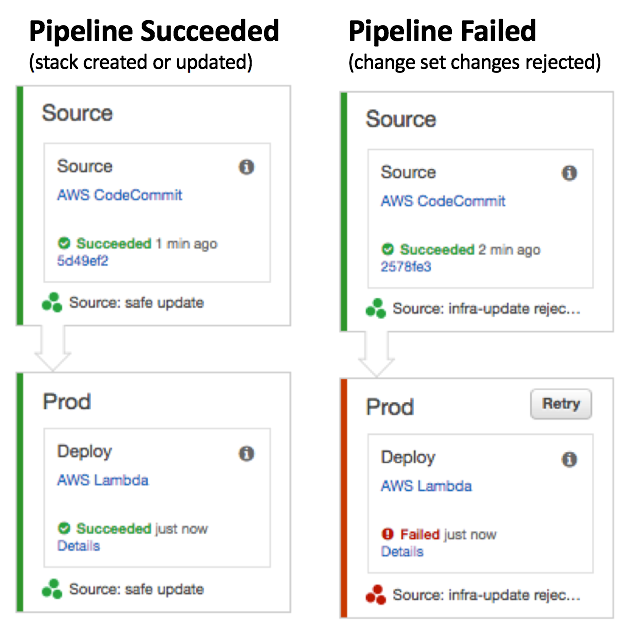 The JSON spec for the pipeline’s Prod stage is shown here. We use the UserParameters attribute to pass the S3 bucket and state machine input file to the Lambda function. These parameters are action-specific, which means that we can reuse the state machine in another pipeline action.

In this blog post, we discussed how state machines in AWS Step Functions can be used to handle workflow-driven actions. We showed how a Lambda function can be used to fully decouple the pipeline and the state machine and manage their interaction. The use of a state machine greatly simplified the associated CodePipeline action, allowing us to build a much simpler and cleaner pipeline while drilling down into the state machine’s execution for troubleshooting or debugging.

Here are two exercises you can complete by using the source code.

Exercise #1: Do not fail the state machine and pipeline action after inspecting a change set that deletes or replaces resources. Instead, create a stack with a different name (think of blue/green deployments). You can do this by creating a state machine transition between the “Safe to Update Infra?” and “Create Stack” stages and passing a new stack name as input to the “Create Stack” stage.

Exercise #2: Add wait logic to the state machine to wait until the change set completes its execution before allowing the state machine to proceed to the “Deployment Succeeded” stage. Use the stack creation case as an example. You’ll have to create a Lambda function (similar to the Lambda function that checks the creation status of a stack) to get the creation status of the change set.

Marcilio Mendonca is a Sr. Consultant in the Canadian Professional Services Team at Amazon Web Services. He has helped AWS customers design, build, and deploy best-in-class, cloud-native AWS applications using VMs, containers, and serverless architectures. Before he joined AWS, Marcilio was a Software Development Engineer at Amazon. Marcilio also holds a Ph.D. in Computer Science. In his spare time, he enjoys playing drums, riding his motorcycle in the Toronto GTA area, and spending quality time with his family.