Editor’s note: This is the first of a popular two-part series by Nick Matthews. Read Part 2 >>

I relate better to networking when people use words and phrases I know, such as “router on a stick,” “MPLS WAN,” and “VRF,” and then show me a packet capture. That’s because I’m a network engineer, and it’s how we talk.

If acronyms such as BGP, ECMP, ACL, VIP, and NIC are familiar to you, you’re in the right place. If not, you may want to look at the Amazon VPC documentation.

To start, Amazon VPC is the networking layer that AWS services use for connectivity. Amazon VPC was built to provide the scale, security, performance, and availability AWS customers require. Since few other networking environments have the same requirements as Amazon VPC, it’s hard to draw a simple comparison to existing networking technology.

To begin, I recommend watching Another Day, Another Billion Packets from re:Invent to understand what’s going on under the hood with packet forwarding, and how the data and control planes work. 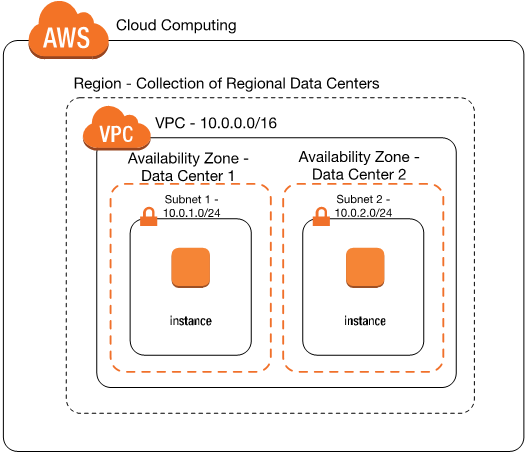 This would be known as a virtual machine (VM) by most network engineers.

An AWS Region is a collection of Availability Zones. You can think of a Region as containing multiple data centers within the same geographic area, with no shared fault domains. For example, a Region with 2 Availability Zones would be a good fit for disaster recovery with synchronous replication. AWS has 12 Regions across the world.

The majority of AWS services are regional, meaning that services can be run in multiple Availability Zones in the same AWS Region. Examples of Regions are Northern Virginia (us-east-1) and Northern California (us-west-1). You should design all traffic flows between AWS Regions as you would for Internet transit traffic, though in some cases flows will use AWS’s private backbone.

A VPC is a set of contained subnets with a common Classless Inter-Domain Routing (CIDR) block (up to a /16 netmask) running in a single geographic area (Region) across multiple data centers (Availability Zones).

A VPC is like a virtual data center, except that it’s physically spread out across Availability Zones. VPCs have network connectivity within the Region in which they are created. You can use Internet connectivity, virtual private network (VPN) connectivity, and VPC peering to connect VPCs to other networks. Address your VPC in RFC 1918 space so that it doesn’t conflict with other parts of your network.

When an account has multiple VPCs, they are similar to virtual routing and forwarding (VRF) tables or contexts on some devices. If you build a service in one VPC and need to access it from another VPC, you will either need to peer the two VPCs or use a VPN to connect them.

Instances in new accounts (created after December 4, 2013) are launched into VPCs by default. There is a default VPC that differs from VPCs created by users, as explained in the Amazon VPC documentation and explained below.

Instances launched from accounts created before December 4, 2013 were on the EC2-Classic platform. Some accounts opened before that date can launch EC2-Classic instances today, but this blog post will not cover EC2-Classic networking.

There are many differences between EC2-VPC and EC2-Classic. For details, see the VPC documentation. With the exception of EC2-Classic instances, which live in a single network shared with other customers, all other instances live in a VPC.

Anatomy of a VPC

It’s useful to be handy with the building blocks of a VPC. The VPC wizard in the Amazon VPC console helps you get started, but network engineers will likely want to expand beyond the use cases defined in the VPC wizard. 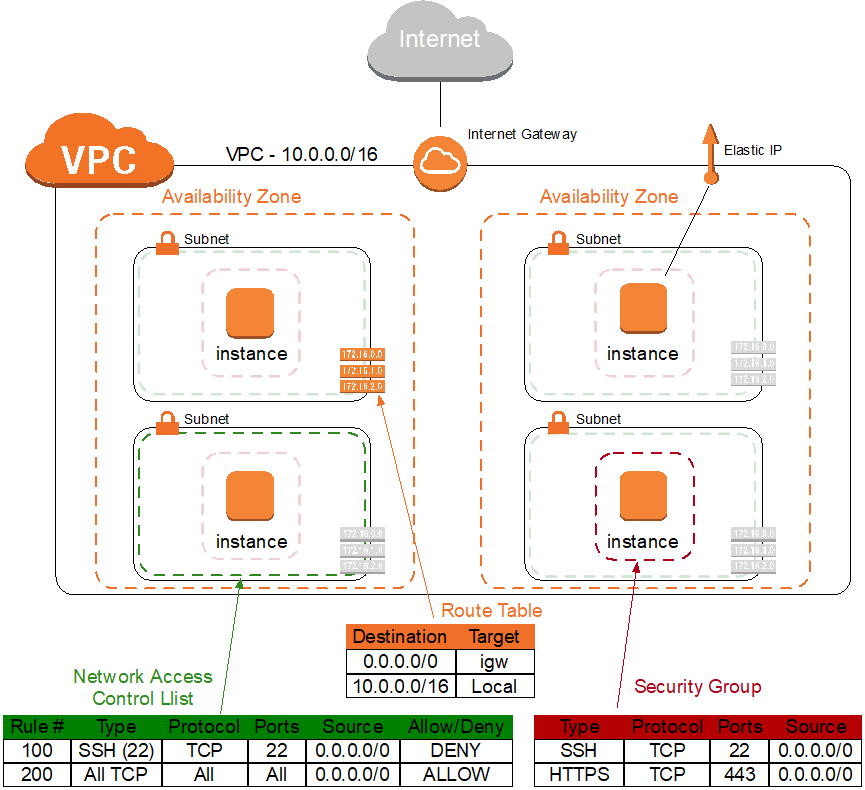 Figure 2 – Basics of a VPC. A sample route table, network ACL, and security group are shown.

As I mentioned earlier, newer accounts (since December 4, 2013) include a default VPC, which mostly emulates the behavior of EC2-Classic networking for backward compatibility. Instances in the default VPC are given public addresses and a route to the Internet by default.

You can also create your own VPC. Instances in a user-created VPC do not receive a public IP address or a route to the Internet by default, but are configurable. Both default VPCs and user-defined VPCs can operate securely using features like security groups.

Subnets take a variable portion of the CIDR block assigned to the VPC. Traditional subnetting rules and notation apply, so take care in subnet sizing, and design an address range that doesn’t overlap with on-premises data centers or other VPCs.

The minimum subnet size is a /28 netmask with 11 addresses. Subnets can be very large on AWS, since broadcast traffic is eliminated (see the “Routing and Switching” section later in this blog post for details). Also, devices like Elastic Load Balancer (ELB) use IP addresses, and many workloads are elastic and use more addresses as they scale up, so you should account for these when sizing subnets.

You may see references to public and private subnets. This is a shortcut for saying whether a subnet has a direct route to the Internet or not; otherwise, there are no differences. Typically, a public subnet has direct access to the Internet.

A private subnet has no external access―it connects through a virtual private gateway (VGW) to an on-premises data center, or uses Network Address Translation (NAT) for Internet-bound traffic. Subnets also have a setting called Auto-assign Public IP, which can give instances public IP addresses by default (and can be overridden per instance).

Route Table: Every subnet has a route table, and a single route table can be associated with multiple subnets. Route tables act like a source-based policy-based routing (PBR) rule. In other words, you can choose which direction packets should go based on the subnet the instance is in.

It’s tempting to describe route tables as being similar to virtual routing and forwarding (VRF) tables. However, subnets in the same VPC can communicate directly with one another, so the separation VRFs typically provide doesn’t apply. Functionally, everything in the same VPC has Layer 2 reachability. Use security groups and Network ACLs (explained below) to provide more granular access.

Security Group: A security group is like an access control list (ACL) typically applied to routers and firewalls, except that it is applied directly to the instance. Security groups handle the bulk of security in AWS to protect instances, and allow for fine-grained security per instance.

If you are interested in getting more detailed management of your security groups, check out APN Partners such as CloudCheckr and Dome9.

If you want to block SSH for an entire subnet, you could add a DENY entry for TCP port 22 in the subnet’s network ACL. Otherwise, you would need to block SSH on each instance’s security group.

Cost of VPCs: VPCs, security groups, route tables, Internet gateways, virtual private gateways, network ACLs, and ENIs are free. VPN connections have an hourly charge. Elastic IP addresses have a cost if they are not associated with an instance, if an instance has more than one Elastic IP address, or if the instance is remapped more than 100 times in a month. Inbound traffic from the Internet is free, and outbound traffic has a data transfer fee. There is a data transfer fee between Availability Zones. For details, see Amazon VPC Pricing and Amazon EC2 Pricing on the AWS website.

Let’s look at the external connectivity options. Each option is something you attach to your VPC, which makes it available to insert into route tables. 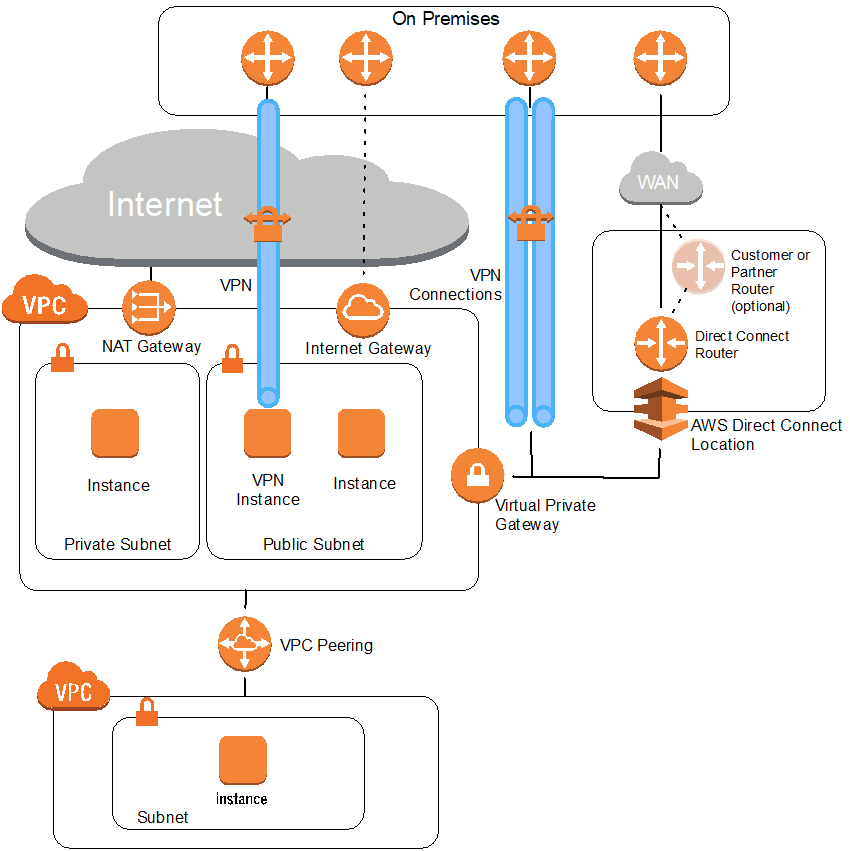 To connect an instance to the Internet in a non-default VPC, you will need to do the following:

NAT gateway: A NAT gateway acts like an ECMP route to a set of NAT devices. These devices will do Network Address Translation (NAT) and Port Address Translation (PAT) for multiple hosts in a VPC to a single public Elastic IP address. (See Understanding NAT and PAT in Webopedia for an explanation of these terms.)

Previously, it was common for a single NAT instance, or a highly available NAT instance pair, to provide this function. A NAT gateway can perform NAT and PAT for less cost, with better performance, and less management overhead while providing better availability. To make this work, you point a default route to a NAT gateway attached to your VPC.

This may affect your route tables, which should be assigned per subnet or Availability Zone. Traffic that flows between Availability Zones has a cost. For more information, see Amazon VPC Pricing.

Appropriate routing and failover must be configured for high availability between the tunnels. A virtual private gateway will not create a back-to-back VPN with another virtual private gateway, since both only respond to VPN connections. Routing works through Border Gateway Protocol (BGP) or static routing, with a maximum of 100 additional routes.

APN Partners such as FortyCloud and Ocedo can simplify creating VPN connections.

For instances running VPN software, there are many APN Partner options (Check Point, Cisco, F5, Fortinet, Palo Alto, Sophos, to name a few) as well as open source options for VPN. These offer great flexibility, and high availability is achieved in numerous ways depending on the software. You can find more about these vendors on the AWS Security Partner Solutions page, and get the software from AWS Marketplace.

Virtual router: The VPC router is mentioned in the AWS documentation, but it’s a logical construct. It’s easier to read the following “Routing and Switching” section to understand traffic flow.

DNS in a VPC: By default, Domain Name System (DNS) is handled by the VPC. Each instance is assigned a DNS name with its address, which is automatically managed. It’s possible to use Amazon Route 53 to create your own DNS service inside a VPC with private hosted zones. You can alternatively use external DNS or host DNS in an EC2 instance.

Routing and switching: This is the fun part. The re:Invent session Another Day, Another Billion Packets, which I mentioned at the beginning of this blog post, covers this topic in depth.

There are a few deviations network engineers will want to know about routing and switching in a VPC: 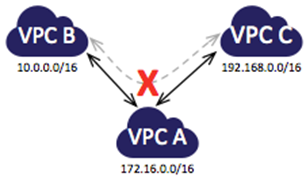 Figure 4 – Without transitive routing, VPCs peered through a hub cannot reach one another―they can only reach directly connected VPCs. Full mesh peering would address this limitation.

This wraps up the first post in this series where I’ve explained the fundamentals and anatomy of basic networking inside a VPC. In the next post I’ll explain how to create a VPC, and cover Direct Connect and some advanced VPC concepts. In the comments section, let us know what else you would like us to cover. We’re always interested in feedback from our APN partners and customers.