In this post, we take a look at an approach to deploy underlying AWS infrastructure to run SAS Grid with FSx for Lustre that you can also apply to similar applications with demanding I/O requirements.

Running high-performance workloads that use throughput heavily, with sensitivity to network latency, requires approaches outside of typical applications. AWS generally recommends that applications span multiple Availability Zones for high availability. In the case of latency sensitivity, high throughput applications traffic should be local for optimal performance. To maximize throughput, you can do the following:

The following diagram illustrates the SAS Grid with FSx for Lustre architecture on AWS. 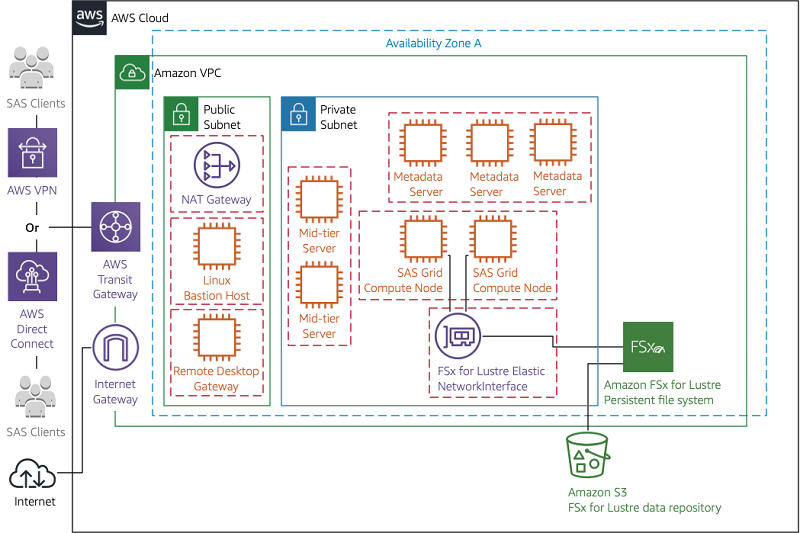 To effectively run PWS and LSF on mid-tier nodes, you need Amazon Elastic Compute Cloud (Amazon EC2) instances with high memory. For this use case, the r5 instance family would meet this requirement.

Metadata servers contain the metadata repository that stores the metadata definitions of all SAS Grid manager products, which the r5 instance family can also serve effectively. We recommend either meeting or exceeding the recommended memory requirement of 24 GB of RAM or 8 MB per physical core (whichever is larger). Metadata servers don’t need compute-intensive resources or high I/O bandwidth; therefore, you can choose the r5 instance family for a balance of price and performance.

SAS Grid nodes are responsible for executing the jobs received by the grid, and EC2 instances capable of handling these jobs depend on the size, complexity, and volume of the work the grid performs. To meet the minimum requirements of SAS Grid workloads, we recommend having a minimum of 8 GB of physical RAM per core and a robust I/O throughput of 100–125 MB/second per physical core. For this use case, EC2 instance families of m5n and r5n suffice in meeting the RAM and throughput requirements. You can host SASDATA, SASWORK, and UTILLOC libraries in a shared file system. If you choose to offload SASWORK to instance storage, the i3en instance family meets this need because they support instance storage over 1.2 TB. In the next section, we take a look at how throughput testing was performed to arrive at the EC2 instance recommendations with FSx for Lustre.

SAS Grid requires a shared file system, and we wanted to benchmark the performance of FSx for Lustre as the chosen shared file system against various EC2 instance families that meet the minimum requirements of 8 GB of physical RAM per core and 100–125 MB/second throughput per physical core.

FSx for Lustre is a fully managed file storage service designed for applications that require fast storage. As a POSIX-compliant file system, you can use FSx for Lustre with current Linux-based applications without having to make any changes. Although FSx for Lustre offers a choice between scratch and persistent type file systems, we recommend for SAS Grid to use persistent type FSx for Lustre file system because you need to store the SASWORK, SASDATA, and UTILLOC data and libraries for longer periods with high availability and data durability. To meet I/O throughput, make sure to select the appropriate storage capacity for throughput per unit of storage to achieve the desired range of 100–125 MB/second.

To select the best-placed EC2 instances for running SAS Grid with FSx for Lustre, we ran a series of highly parallel network throughput tests from individual EC2 instances against a 100.8 TiB persistent file system that had an aggregate throughput capacity of 19.688 GB/second. We ran these tests in multiple regions using multiple EC2 instance families (c5, c5n, i3, i3en, m5, m5a, m5ad, m5n, m5dn, r5, r5a, r5ad, r5n, and r5dn). The tests ran for 3 hours for each instance, and the DataWriteBytes metric of the file system was recorded every 1 minute. Only one instance was accessing the file system at a time, and the p99.9 results were captured. The metrics were consistent across all four Regions.

We observed that the i3en, m5n, m5dn, r5n, and r5dn EC2 instance families meet or exceed the minimum network performance and memory recommendations. For more information about the performance results, see the whitepaper Accelerating SAS Using High-Performing File Systems on Amazon Web Services. The i3 instance family is just shy of meeting the minimum network performance. If you want to use the instance storage for SASWORK and UTILLOC libraries, you can consider i3en instances.

M5n and r5n are a good blend of price and performance, and we recommend the m5n instance family for SAS Grid nodes. However, if your workload is memory bound, consider using r5n instances, which provide higher memory per physical core for a higher price point than m5n instances.

We also ran rhel_iotest.sh, which is available from the SAS technical support samples tool repository (SASTSST), using the same FSx for Lustre configuration as mentioned earlier. The following table shows the read and write performance per physical core for a variety of instances sizes in the m5n and r5n families.

Before FSx for Lustre file system, you either had to use Amazon Elastic File System (Amazon EFS) or a third-party file system from AWS Marketplace and Amazon Elastic Block Store (Amazon EBS) for the SASWORK, SASDATA, and UTILLOC libraries and storage data. Each storage option came with its own settings and limitations, which caused loss in performance. With FSx for Lustre, you have a single solution for all SAS Grid storage requirements, which allows you to focus on running your business instead of maintaining a file system. We recommend that SAS admin deploy SAS Grid with m5n and r5n instances for SAS Grid compute nodes when accessing FSx for Lustre file system.

If you have questions or suggestions, please leave a comment.