This post details the result of various tests comparing the performance and cost for the RA3 and DS2 instance types. It will help Amazon Web Services (AWS) customers make an informed decision on choosing the instance type best suited to their data storage and compute needs.

As a result of choosing the appropriate instance, your applications can perform better while also optimizing costs.

The test runs are based on the industry standard Transaction Processing Performance Council (TPC) benchmarking kit.

RA3 is based on AWS Nitro and includes support for Amazon Redshift managed storage, which automatically manages data placement across tiers of storage and caches the hottest data in high-performance local storage.

Through advanced techniques such as block temperature, data-block age, and workload patterns, RA3 offers performance optimization. It can be resized using elastic resize to add or remove compute capacity. If elastic resize is unavailable for the chosen configuration, then classic resize can be used.

RA3 nodes with managed storage are an excellent fit for analytics workloads that require high storage capacity. They can be the best fit for workloads such as operational analytics, where the subset of data that’s most important continually evolves over time. In the past, there was pressure to offload or archive historical data to other storage because of fixed storage limits.

You can upgrade to RA3 instances within minutes, no matter the size of the current Amazon Redshift clusters. To learn more, please refer to the RA3 documentation.

Amazon Redshift’s ra3.16xlarge cluster type, released during re:Invent 2019, was the first AWS offering that separated compute and storage. However, due to heavy demand for lower compute-intensive workloads, Amazon Redshift launched the ra3.4xlarge instance type in April 2020.

Customers using the existing DS2 (dense storage) clusters are encouraged to upgrade to RA3 clusters. A benchmarking exercise like this can quantify the benefits offered by the RA3 cluster.

For more details on the specification of DS2 vs RA3 instances, two Amazon Redshift clusters chosen for this benchmarking exercise. Please note this setup would cost roughly the same to run for both RA3 and DS2 clusters.

*- ra3.4xlarge node type can be created with 32 nodes but resized with elastic resize to a maximum of 64 nodes.

We decided to use TPC-DS data as a baseline because it’s the industry standard. The volume of uncompressed data was 3 TB. After ingestion into the Amazon Redshift database, the compressed data size was 1.5 TB.

We carried out the test with the RA3 and DS2 cluster setup to handle the load of 1.5 TB of data. All testing was done with the Manual WLM (workload management) with the following settings to baseline performance:

The table below summarizes the infrastructure specifications used for the benchmarking:

We imported the 3 TB dataset from public S3 buckets available at AWS Cloud DW Benchmark on GitHub for the test.

We measured and compared the results of the following parameters on both cluster types:

The following scenarios were executed on different Amazon Redshift clusters to gauge performance:

With the improved I/O performance of ra3.4xlarge instances,

The graph below represents that RA3 consistently outperformed DS2 instances across all single and concurrent user querying. 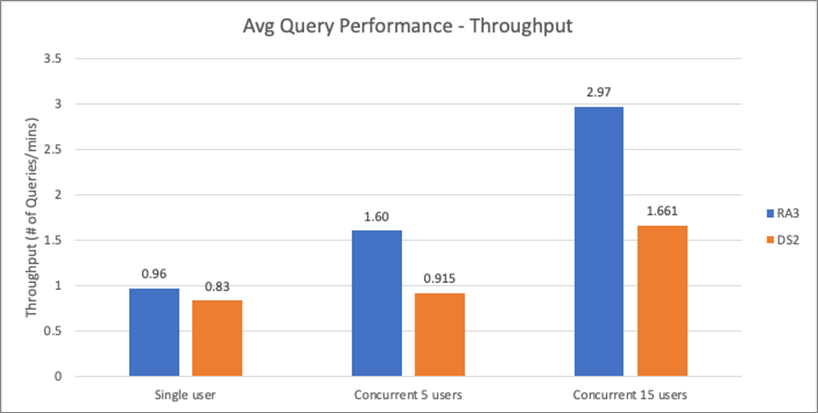 The local storage used in the RA3 instances types is Solid State Drive (SSD) compared to DS2 instances, which has (Hard Disk Drive) HDD as local storage. We wanted to measure the impact of change in the storage layer has on CPU utilization.

Customers check the CPU utilization metric period to period as an indicator to resize their cluster. A CPU utilization hovering around 90 percent, for example, implies the cluster is processing at its peak compute capacity.

In this case, suitable action may be resizing the cluster to add more nodes to accommodate higher compute capacity. This is particularly important in RA3 instances because storage is separate from compute and customers can add or remove compute capacity independently.

In this setup, we decided to choose manual WLM configuration. The graph below designates the CPU utilization measured under three circumstances.

The observation from this graph is that the CPU utilization remained the same irrespective of the number of users. Considering the benchmark setup provides 25 percent less CPU as depicted in Figure 3 above, this observation is not surprising.

With ample SSD storage, ra3.4xlarge has a higher provisioned I/O of 2 GB/sec compared to 0.4 GB/sec for ds2.xlarge, which has HDD storage.

These results provide a clear indication that RA3 has significantly improved I/O throughput compared to DS2.

From this benchmarking exercise, we observe that: 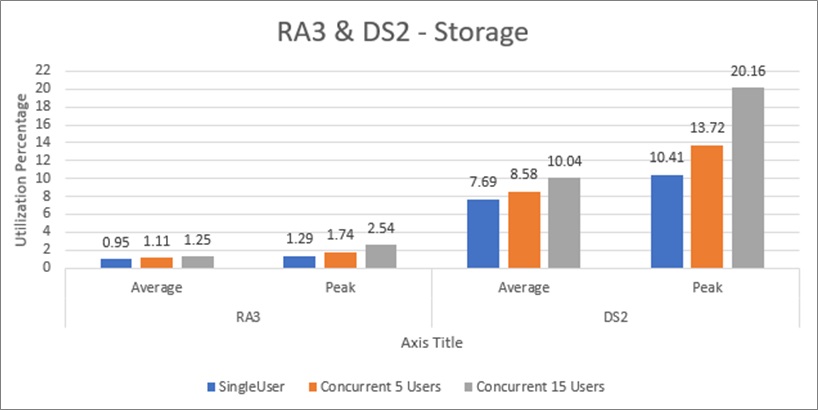 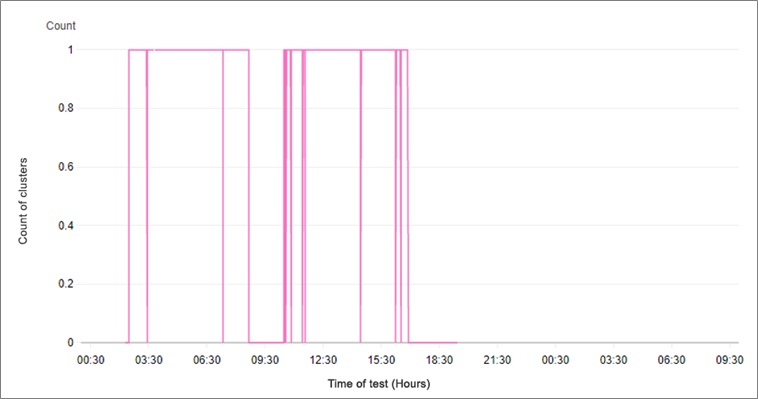 We observed the scaling was stable and consistent for RA3 at one cluster. However, for DS2 it peaked to two clusters, and there was frequent scaling in and out of the clusters (eager scaling).

This graph depicts the concurrency scaling for the test’s two iterations in both RA3 and DS2 clusters. 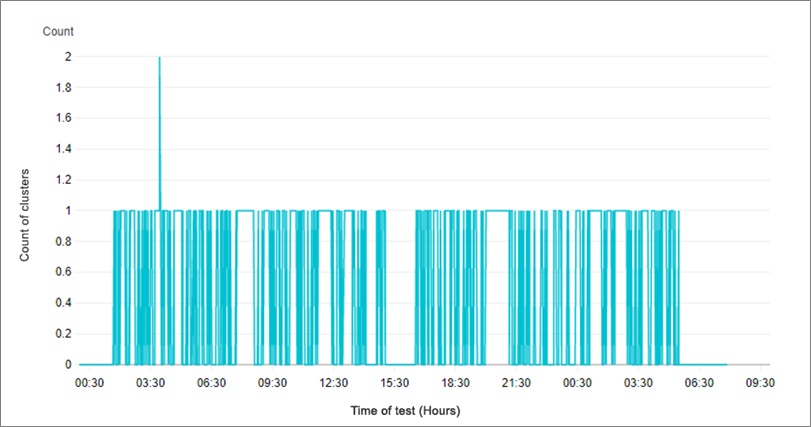 The workload concurrency test was executed with the below Manual WLM settings:

In RA3, we observed the number of concurrently running queries remained 15 for most of the test execution. This is because concurrency scaling was stable and remained consistent during the tests.

Total concurrency scaling minutes was 97.95 minutes for the two iterations.

However, for DS2 clusters concurrently running queries moved between 10 and 15, it spiked to 15 only for a minimal duration of the tests. This can be attributed to the intermittent concurrency scaling behavior we observed during the tests, as explained in the Concurrency Scaling section of this post above.

Total concurrency scaling minutes was 121.44 minutes for the two iterations.

This post can help AWS customers see data-backed benefits offered by the RA3 instance type. As a result of choosing the appropriate instance, your applications can perform better while also optimizing costs.

Based on Agilisium’s observations of the test results, we conclude the newly-introduced RA3 cluster type consistently outperforms DS2 in all test parameters and provides a better cost to performance ratio (2x performance improvement).

We highly recommend customers running on DS2 instance types migrate to RA3 instances at the earliest for better performance and cost benefits.

Agilisium is an AWS Advanced Consulting Partner and big data and analytics company with a focus on helping organizations accelerate their “data-to-insights leap.”