Organizations sometimes need to migrate large volumes of object data from one cloud provider to another. Reasons for this type of migration may include data consolidation, workload migration, disaster recovery, or the end of a discount program. Migrations typically require end-to-end encryption, the ability to detect changes, object validation, network throttling, monitoring, and cost optimization. Building such solutions are time-consuming, expensive, and difficult to scale. Furthermore, migrating between public cloud providers limits certain options such as physically accessing the storage devices at the data center.

DataSync has four components for data movement: task, locations, agent, and task execution. Figure 1 shows the relationship between the components and the attributes that I’ll use for the tutorial. 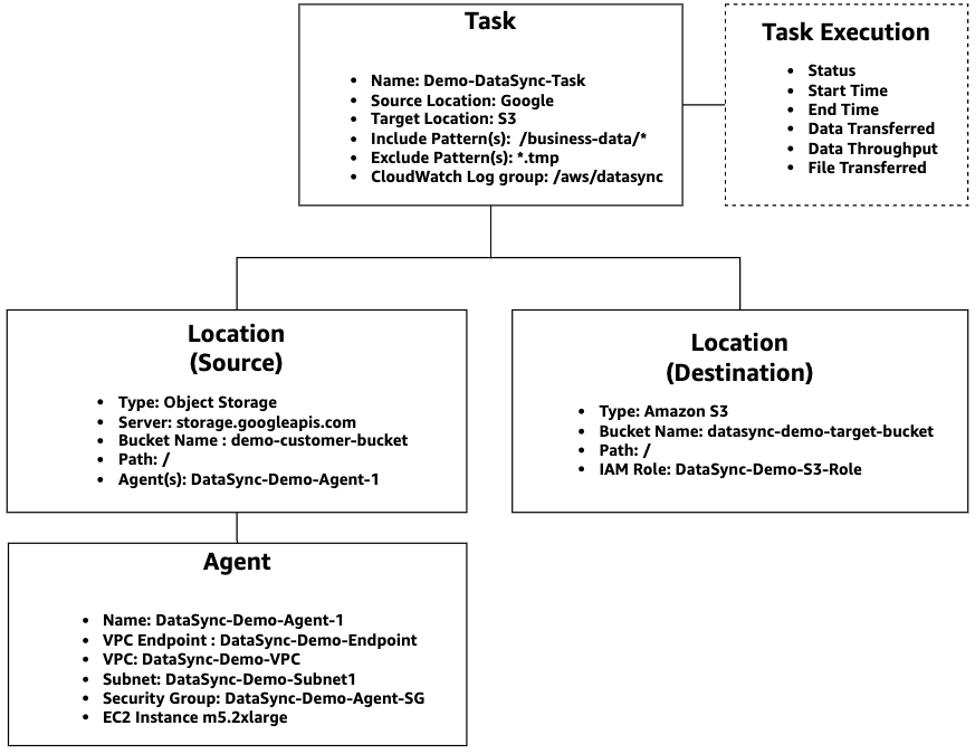 For this tutorial, you should have the following prerequisites:

For our tutorial, I have a source Google Cloud Storage bucket named demo-customer-bucket. You can create a storage bucket and upload objects to your bucket to follow along. This bucket has two folders: business-data and system-data. In this use case, I only want to transfer the objects in the business-data folder and ignore the system-data folder. This is to demonstrate DataSync’s capability to include or exclude folders from the source bucket. 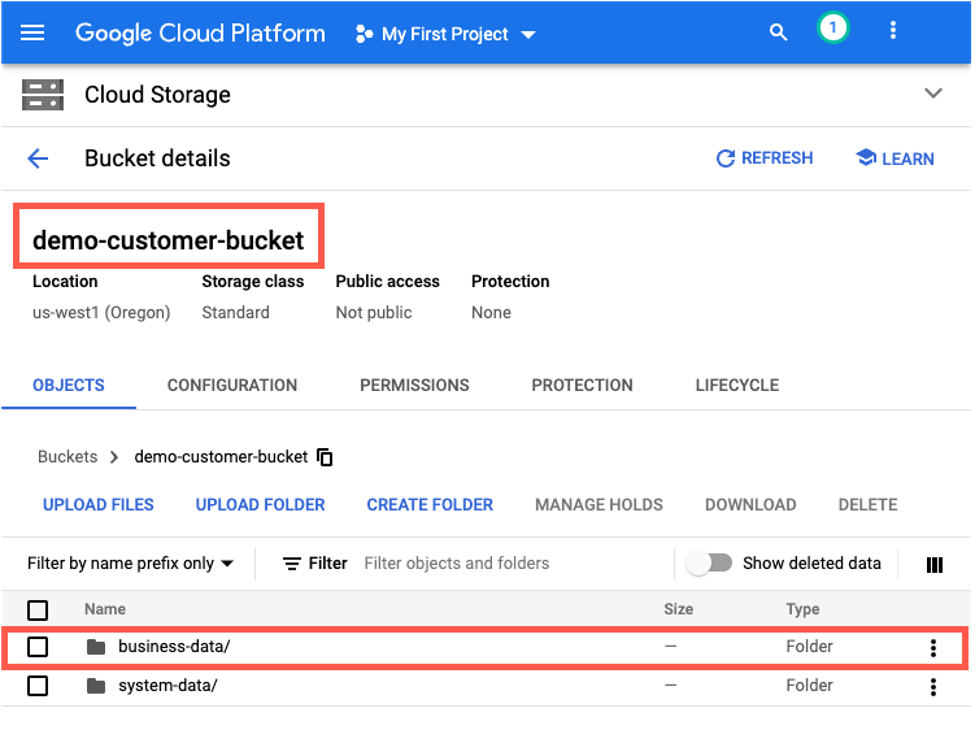 Inside the business-data folder, there are six files. My goal is to transfer the five text files while ignoring the temporary file named log.tmp. This is to demonstrate DataSync’s capability to exclude certain objects based on name pattern. 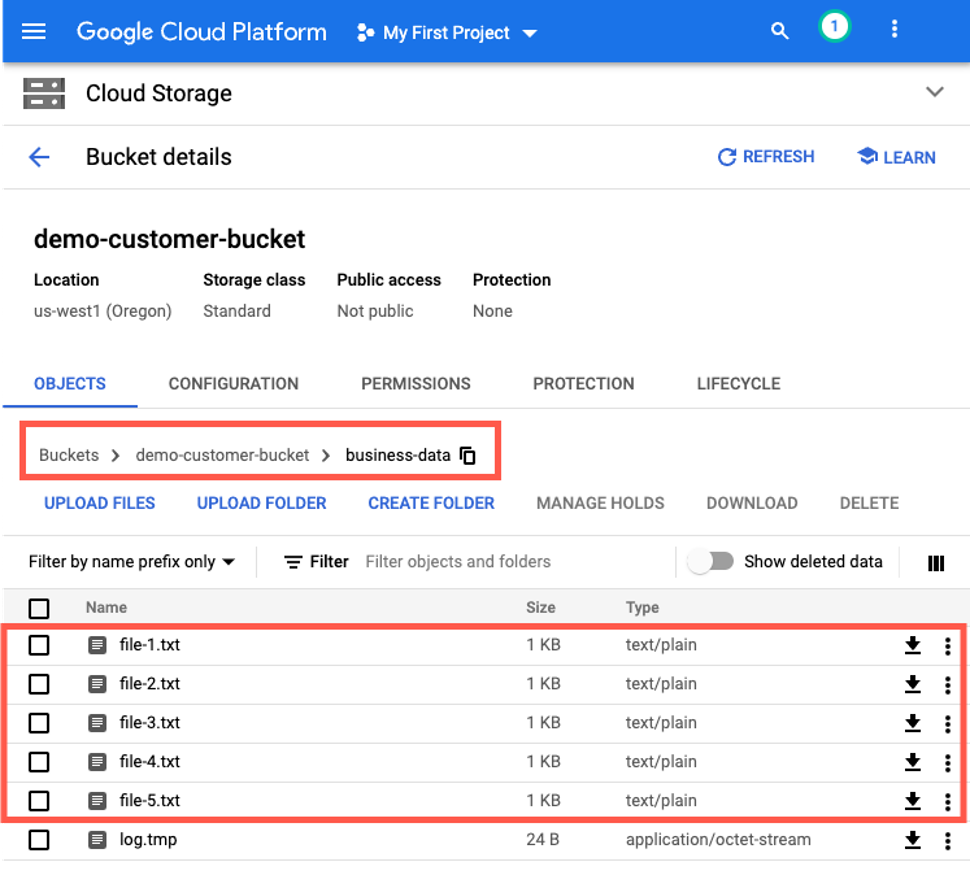 Now I am ready to build the solution to move data from Google Cloud Storage to Amazon S3 using AWS DataSync. The following are the high-level steps:

DataSync agent uses an HMAC credential to authenticate to Google Cloud Platform and manage objects in the Cloud Storage bucket. This requires creating a key for a service account. You can follow the directions at Manage HMAC keys for service accounts. When complete, you should have an access ID and a secret. Keep this information in a secure location. 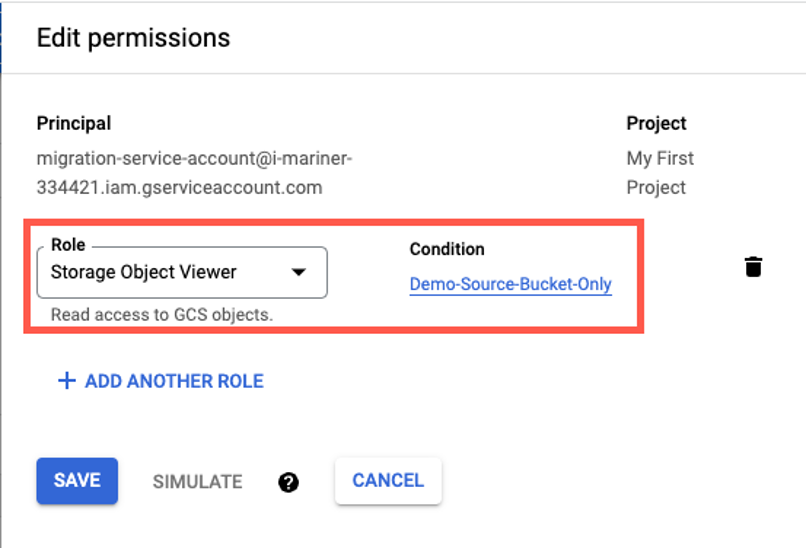 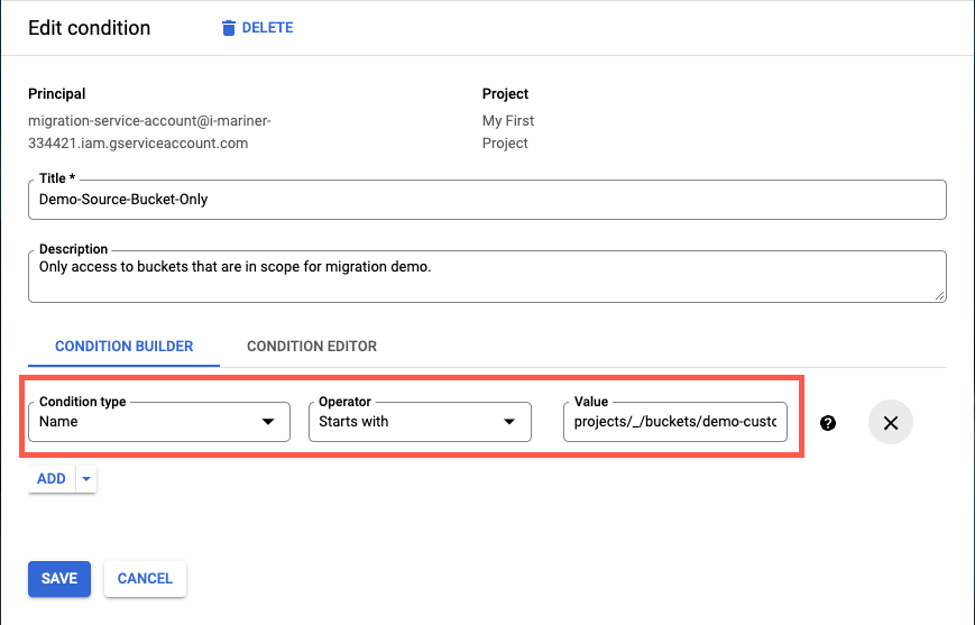 Step 2: Create an Amazon S3 bucket as the destination

AWS DataSync needs to access the Amazon S3 bucket in order to transfer the data to the destination bucket. This requires DataSync to assume an IAM role with appropriate permission and trust relationship. Create a new role and attach a policy that allows DataSync to read and write to your Amazon S3 bucket.

Step 4: Set up a network for the Amazon VPC endpoint

Create the VPC, subnet, route table, and security group based on the network requirements when using VPC endpoints.  Then, create a DataSync interface endpoint. With this endpoint, the connection between an agent and the DataSync service doesn’t cross the public internet and doesn’t require public IP addresses. 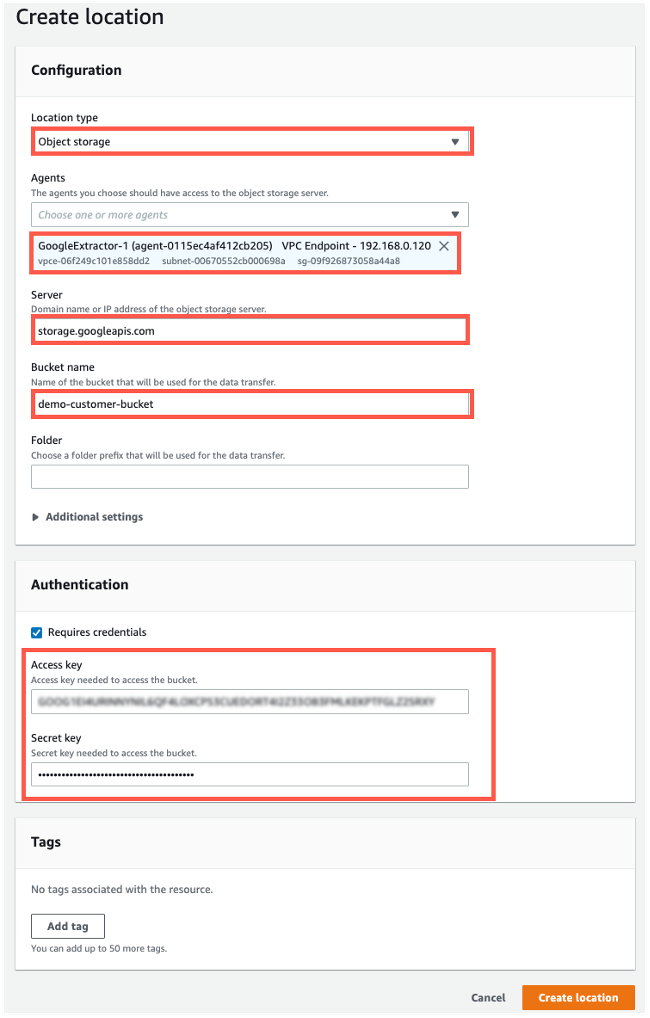 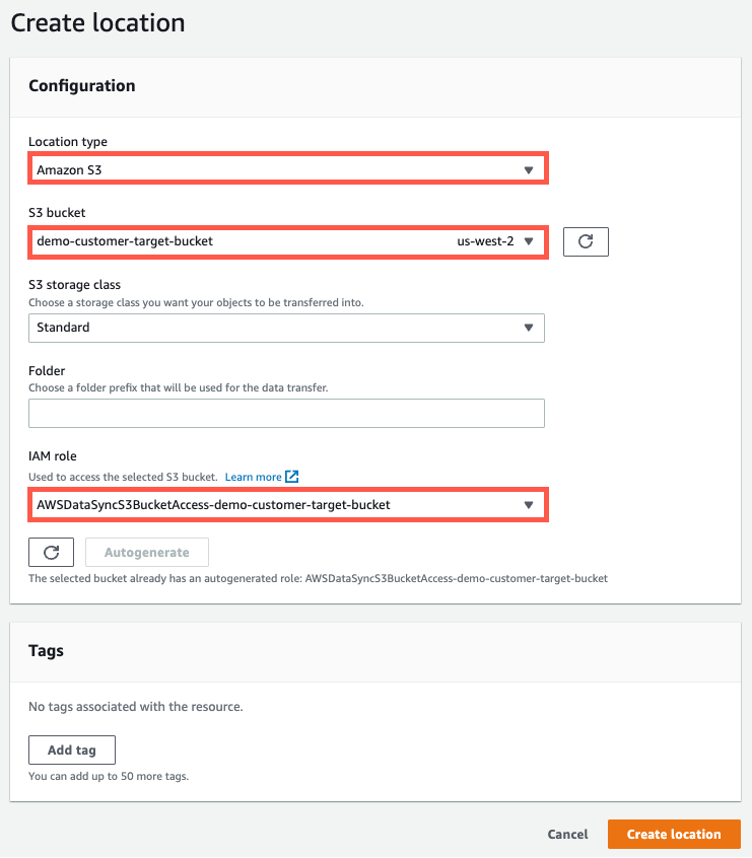 The next step is to create an AWS DataSync task. Follow these steps to create a task starting with configuring the source and destination locations.

The next step is to configure the settings for the DataSync task. 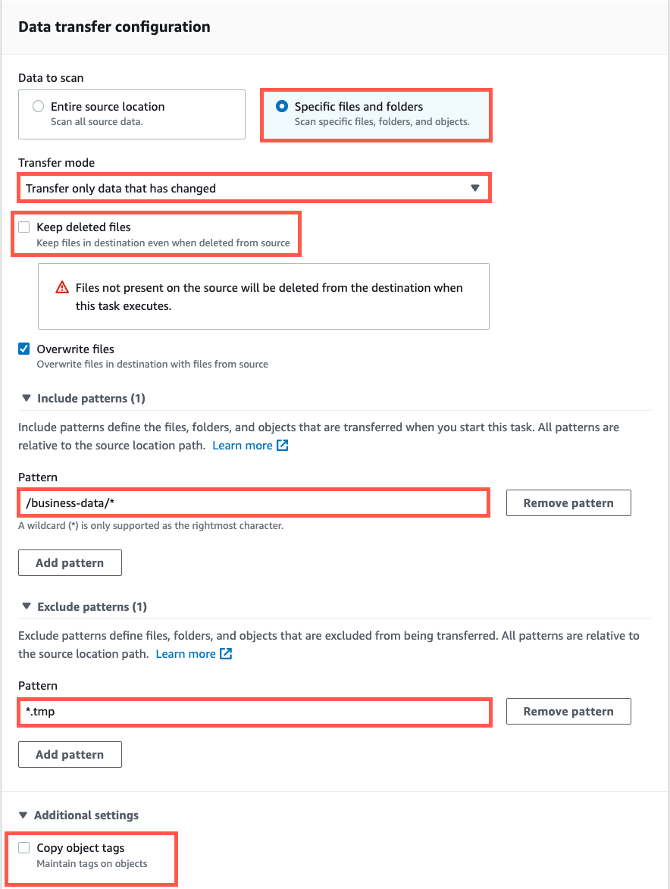 The final step is to start the DataSync task to transfer the files. The status of the task will update as the task passes each phase. See Understanding task execution status for possible statuses (phases) and meaning. You can also monitor DataSync using Amazon CloudWatch.

You can run the task multiple times. Each time a task runs, AWS DataSync will detect the changes between source and destination and only transfer the objects that are new or modified. This allows you to transfer data that may be changing on the source location. 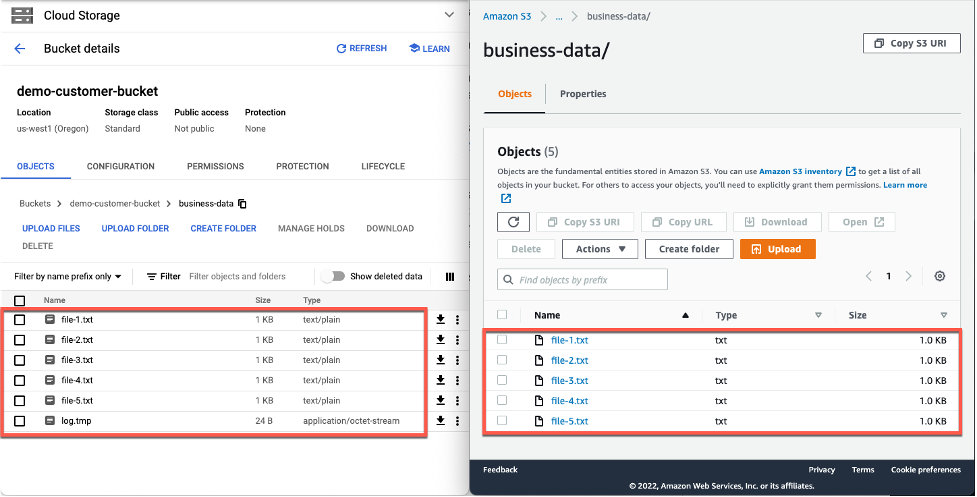 DataSync also transfers the object’s custom metadata. In this tutorial, the file-1.txt file had a custom metadata of Department with value of Math. This information was transferred to the Amazon S3 metadata. 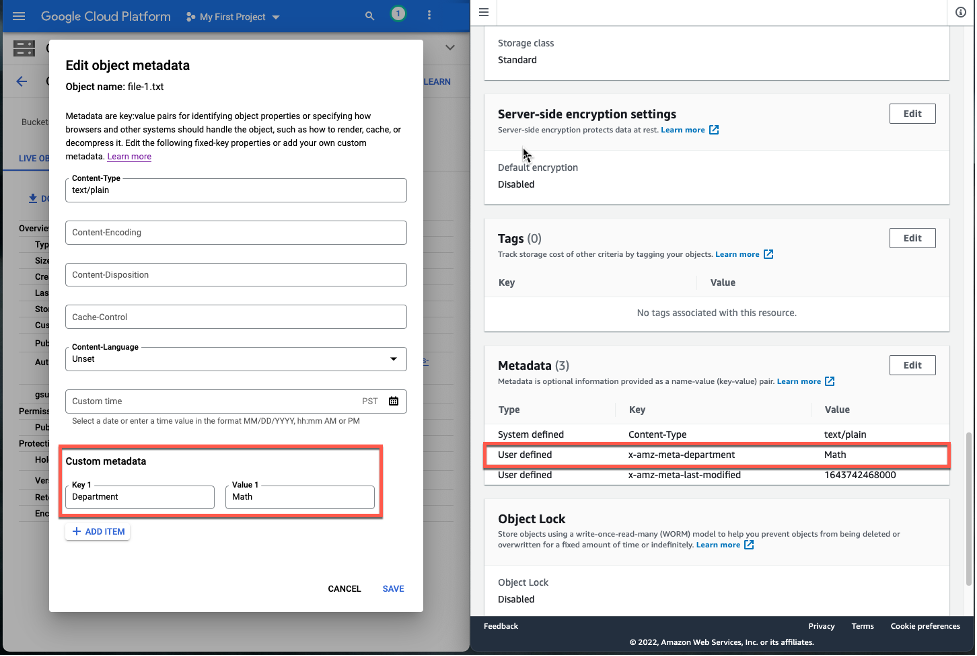 To avoid incurring future charges, delete the resources used in this tutorial.

In this blog post, I discussed using AWS DataSync to migrate object data from Google Cloud Storage to Amazon S3, and walked through configuring AWS DataSync to migrate objects from a Google Cloud Storage bucket to an Amazon S3 bucket. I also demonstrated using AWS features to include and exclude source bucket folders and objects.

Using AWS DataSync, you can simplify migrating a large volume of data from Google Cloud Platform to Amazon S3. AWS DataSync has built-in capabilities that allow you to connect to Google Cloud Storage through Google Storage XML API with HMAC key. With the solution covered in this post, you can take advantage of DataSync’s features, including the ability to run the tasks multiple times to capture changes in the source dataset.

Here are additional resources to help you get started with AWS DataSync:

Thank you for reading this post on migrating Google Cloud Storage to Amazon S3 using AWS DataSync. I encourage you to try this solution today. If you have any comments or questions, please leave them in the comments section.