by Wesley Pettit and Michael Hausenblas

AWS is built for builders. Builders are always looking for ways to optimize, and this applies to application logging. Not all logs are of equal importance. Some require real-time analytics, others simply need to be stored long-term so that they can be analyzed if needed. It’s therefore critical to be able to easily route your logs to a wide variety of tools for storage and analytics provided by AWS and its partners.

That’s why we are supporting Fluent Bit to help create an easy extension point for streaming logs from containerized applications to AWS’ and partners’ solutions for log retention and analytics. With the newly-launched Fluent Bit plugin for AWS container image, you can route logs to Amazon CloudWatch and Amazon Kinesis Data Firehose destinations (which include Amazon S3, Amazon Elasticsearch Service, and Amazon Redshift). In this post we will show you the Fluent Bit plugin in action on both Amazon ECS and EKS clusters. You might also want to check out the tutorial on the basics of Fluentd and the Kinesis Firehose, if you’re not familiar with the tooling itself, as well as review the relevant issues in the AWS containers roadmap, especially #10 and #66.

On the left-hand side of above diagram, the log sources are depicted (starting at the bottom):

Next comes the routing component: this is Fluent Bit. It takes care of reading logs from all sources and routing log records to various destinations, also known as log sinks. This routing component needs to run somewhere, for example as a sidecar in a Kubernetes pod / ECS task, or as a host-level daemon set.

The downstream log sinks consume logs for different purposes and audiences. These include a number of use cases, from log analysis to compliance (requiring that logs be stored for a given retention period), alerting when a human user needs to be notified of an event, and dashboard logs that provide a collection of (real-time) graphs to help human users absorb the overall state of the system at a glance.

With these basics out of the way, let’s now look at a concrete use case: centralized logging of a multi-cluster app using Fluent Bit. All the container definitions and configurations ace available in the Amazon ECS Fluent Bit Daemon Service GitHub repo.

To show Fluent Bit in action, we will perform a multi-cluster log analysis across both an Amazon ECS and an Amazon EKS cluster, with Fluent Bit deployed and configured as daemon sets. The application-level logs generated by NGINX apps running in each cluster is captured by Fluent Bit and streamed via Amazon Kinesis Data Firehose to Amazon S3, where we can query them using Amazon Athena: 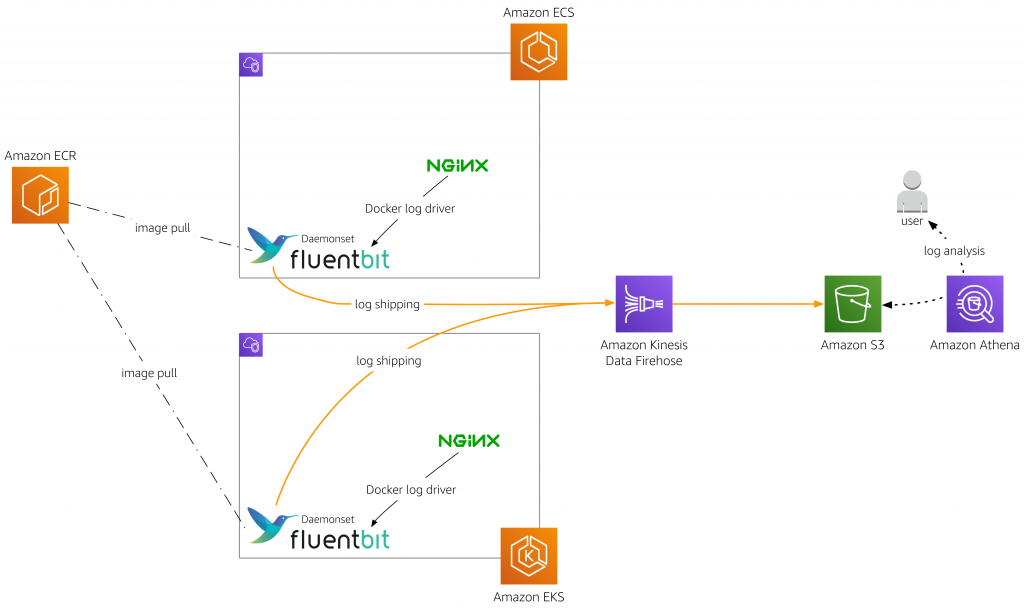 Create an ECS on EC2 cluster with the following user data—in our case, in a file called enable-fluent-log-driver.sh (source)—to enable the Fluentd log driver in the ECS agent:

For example, we created the ECS on EC2 cluster like so; this step assumes that you have the ECS CLI installed:

Next, we need to build a container image containing the Fluent Bit configuration. We’ll do that by creating a Dockerfile (source) with the following content:

NOTE Counter to good security practice, the USER is not defined, making it run as root. This is intentionally done so, because Fluent Bit currently requires to run as root.

The above Dockerfile in turn depends on two configuration files:

Now, we’ll build our custom container image and push it to an ECR repository called fluent-bit-demo:

Verify that your custom log routing image build and push was successful by visiting the ECR console; you should see something like this:

We’re now in a position to launch an ECS service with daemon scheduling strategy to deploy our custom-configured Fluent Bit into our cluster, using the above container image:

In the ECS console you should now see something like this: 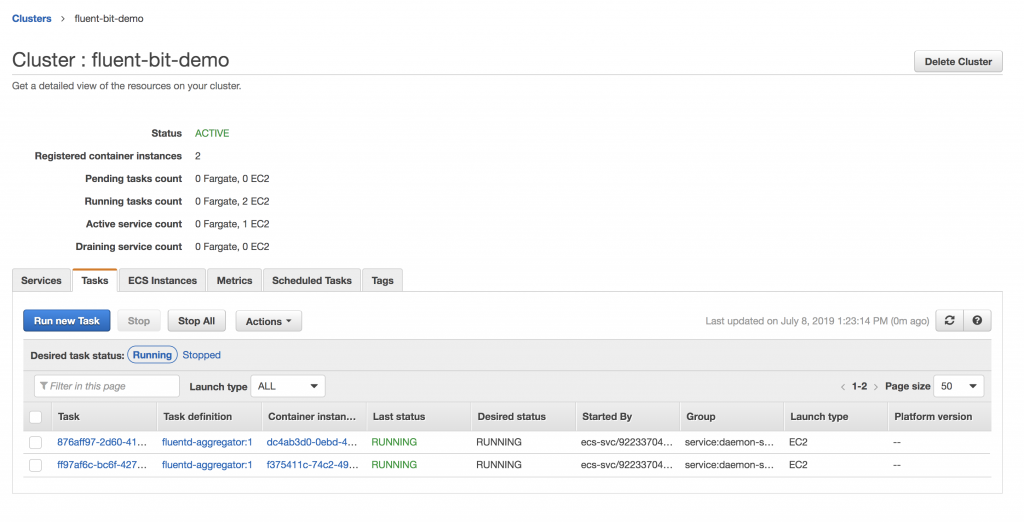 Now we can launch an ECS service, running NGINX, based on following task definition:

After creating the above task definition, you should now see the following in your ECS console:

And now we can launch the ECS service based on above task definition:

If everything worked out, you should see something like the following in the ECS console:

With this, we’ve set up the ECS part. Now we configure the same setup on our Kubernetes cluster running on Amazon EKS.

Create an Amazon EKS cluster named fluent-bit-demo using eksctl, as shown in the EKS docs, and then create a policy file called eks-fluent-bit-daemonset-policy.json (source) with the following content:

To attach this policy file to the EKS on EC2 worker nodes, execute the following sequence:

And now we move on to defining the Kubernetes RBAC settings – that is, the service account the Fluent Bit pods will be using along with the role and role binding.

First create the service account fluent-bit (this is what we will later use in the daemon set) by executing kubectl create sa fluent-bit.

Next, define the role and binding in a file named eks-fluent-bit-daemonset-rbac.yaml(source):

Now, in order to make the access permissions for the Fluent Bit plugin effective, you create the role and role binding, defined above, by executing the command kubectl apply -f eks-fluent-bit-daemonset-rbac.yaml.

In contrast to the ECS case, where we backed the configuration into a custom image, in our Kubernetes setup we’re using a config map to define the log parsing and routing for the Fluent Bit plugin. For this, use a file called eks-fluent-bit-configmap.yaml(source) with the following content:

Create this config map by executing the command kubectl apply -f eks-fluent-bit-configmap.yaml and then define the Kubernetes Daemonset (using said config map) in a file called eks-fluent-bit-daemonset.yaml (source) with below content:

With that, we’re done setting up the log sources and routing. Now let’s move on to actually doing something with all the log data we’re collecting from the NGINX containers running in ECS and EKS: we will perform a centralized analysis of the logs.

The goal is to do a log analysis of the NGINX containers running in the ECS and EKS clusters. For this, we’re using Amazon Athena, which allows us to interactively query the service log data from Amazon S3 using SQL. Before we can query the data in S3, however, we need to get the log data there.

Remember that in the Fluent Bit configurations for ECS and EKS (above) we set the output to delivery_stream xxx-stream. That’s an Amazon Kinesis Firehose delivery stream, and we first have to create it, for ECS and EKS.

First, set up the access control part by defining a policy that effective allows Firehose to write to S3. To do this, we need to create a new IAM Role with two policy files. First, firehose-policy.json(source):

Second, in the firehose-delivery-policy.json policy file (source), replace the XXXXXXXXXXXX with your own account ID (if you’re unsure what it is, you can get the account ID  by executing aws sts get-caller-identity --output text --query 'Account'). Also, in the S3 section, replace mh9-firelens-demo with your own bucket name.

Now we can create the firehose_delivery_role to use for both the ECS and the EKS delivery streams:

From the resulting JSON output of the above command, note down the role ARN, which will be something in the form of arn:aws:iam::XXXXXXXXXXXXX:role/firehose_delivery_role. We will use this soon to create the delivery stream, but before that can happen we have to put in place the policy defined in the firehose-delivery-policy.json:

NOTE The spacing in above command matters: RoleARN etc. must be on one line without spaces.

Now we have to repeat the above for the EKS delivery stream, re-using the role created in the first step. (In other words, you only need to repeat the aws firehose create-delivery-stream command replacing ecs-stream with eks-streamand Prefix=ecs with Prefix=eks.)

It will take a couple of minutes for the delivery streams to be created and active. When you see something like the following, you’re ready to move on to the next step:

We now need to generate some load for the NGINX containers running in ECS and EKS. You can grab the load generator files for ECS  and EKS and execute the commands below; this will curl the respective NGINX services every two seconds (executing in the background), until you kill the scripts:

Now that we have some log data from the NGINX webservers, we can query the log entries in S3 from Athena. For this, we first have to create tables for ECS and EKS, telling Athena about the schema we’re using (here shown for the ECS log data and the same applies for EKS):

NOTE Amazon Athena does not import or ingest data; it queries the data directly in S3. So, as log data arrives from the NGINX containers via Fluent Bit and the Firehose delivery stream in the S3 bucket, it is available for you to query using Athena.

Next create a consolidated view of both the ECS and EKS log entries with the following SQL statement:

This allows us to merge the two tables (using the same schema) and add an additional column that flags the source, ECS or EKS. We can now perform a SQL query to figure out who the top 10 users of our NGINX services are, across the two clusters:

When you’re done, don’t forget to delete the respective workloads, including the Kubernetes NGINX service (which in turn removes the load balancer), and tear down the EKS and ECS clusters, destroying the containers with it. Last but not least, you will want to clean up the Kinesis delivery streams and the S3 bucket with the log data.

Looking ahead, we are also working on a feature to further simplify installing and configuring fluent bit plugins on AWS Fargate, Amazon ECS, and Amazon EKS. You can follow this feature via the Issue 10 of our AWS container roadmap.

Notes on performance and next steps

To get a better feeling for the performance, we performed a benchmarking test to compare the above Fluent Bit plugin with the Fluentd CloudWatch and Kinesis Firehose plugins. All our tests were performed on a c5.9xlarge EC2 instance. Here are the results:

In this benchmark, on average Fluentd uses over three times the CPU and four times the memory than the Fluent Bit plugin consumes. Keep in mind that this data does not represent a guarantee; your footprint may differ. However, the above data points suggest that the Fluent Bit plugin is significantly more efficient than Fluentd.

We’re excited for you to try this out on your own clusters. Let us know if something doesn’t work the way you expect, and also please share your insights on performance/footprint as well as use cases. Please leave comments on the issue in GitHub, or open an issue on the AWS containers roadmap on GitHub. 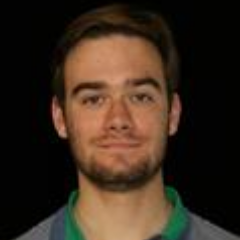