By Areg Alimian, Senior Director of Product Management at Ixia

At Ixia, a Keysight business and AWS Partner Network (APN) Advanced Technology Partner, I am fortunate to have the opportunity to learn from and work with dozens of enterprise IT professionals and executives as they plan to migrate applications and web services to the AWS Cloud.

As the move towards cloud accelerates, unsubstantiated fears about security are inhibiting the use of cloud services by some enterprises. A vital element of a successful cloud migration is understanding shared responsibilities between the organization and cloud service provider. In fact, Gartner predicts that, through 2020, 95 percent of cloud security failures will be the customer’s fault.*

The security and monitoring tools offered by cloud providers include support for networking, database, storage, compute, and availability zones. However, analysis of customer packet data, which is critical for network security, is the customer’s responsibility.

Other customer responsibilities outlined in the Shared Responsibility Model include platform, application, identity and access management, operating system, network and firewall configuration, and the protection of data at rest and data in motion.

There are multiple strategies for cloud migration—re-architecting for the cloud, building cloud-native, re-hosting (lift-and-shift), or re-platforming. Stephen Orban, who heads up enterprise strategy at AWS, does a terrific job explaining trade-offs in his Medium post 6 Strategies for Migrating Applications to the Cloud.

Regardless of the approach, a successful migration depends on the security of your cloud environment, as well as application performance and fault tolerance, ease of use, cost, and the availability of vendor solutions for security analytics, applications, or network performance management.

To support a distributed application architecture built to leverage the cloud’s full capabilities, there are several critical requirements for successful visibility and controls designed to provide security—capturing and filtering traffic, and allowing for horizontal scaling while providing pervasive data to tools.

In a traditional data center, there is physical access to the network so physical taps and network packet brokers can be used to access and filter data. In the cloud, however, the physical infrastructure is the responsibility of the service provider.

Cloud-based applications are generally built as a collection of services that decouple the data from the application and are modeled to scale by spinning up additional instances and leveraging a pool of shared resources, when needed. This means control to the network domain is limited.

A key customer requirement for moving workloads to the cloud is the need to employ independent, application-level monitoring and analytics of workload behavior. But the tools available to monitor the performance of your environment are virtual private cloud (VPC) flow logs or application metadata, both of which address some needs but do not provide the level of visibility that packet data does for complete clarity. 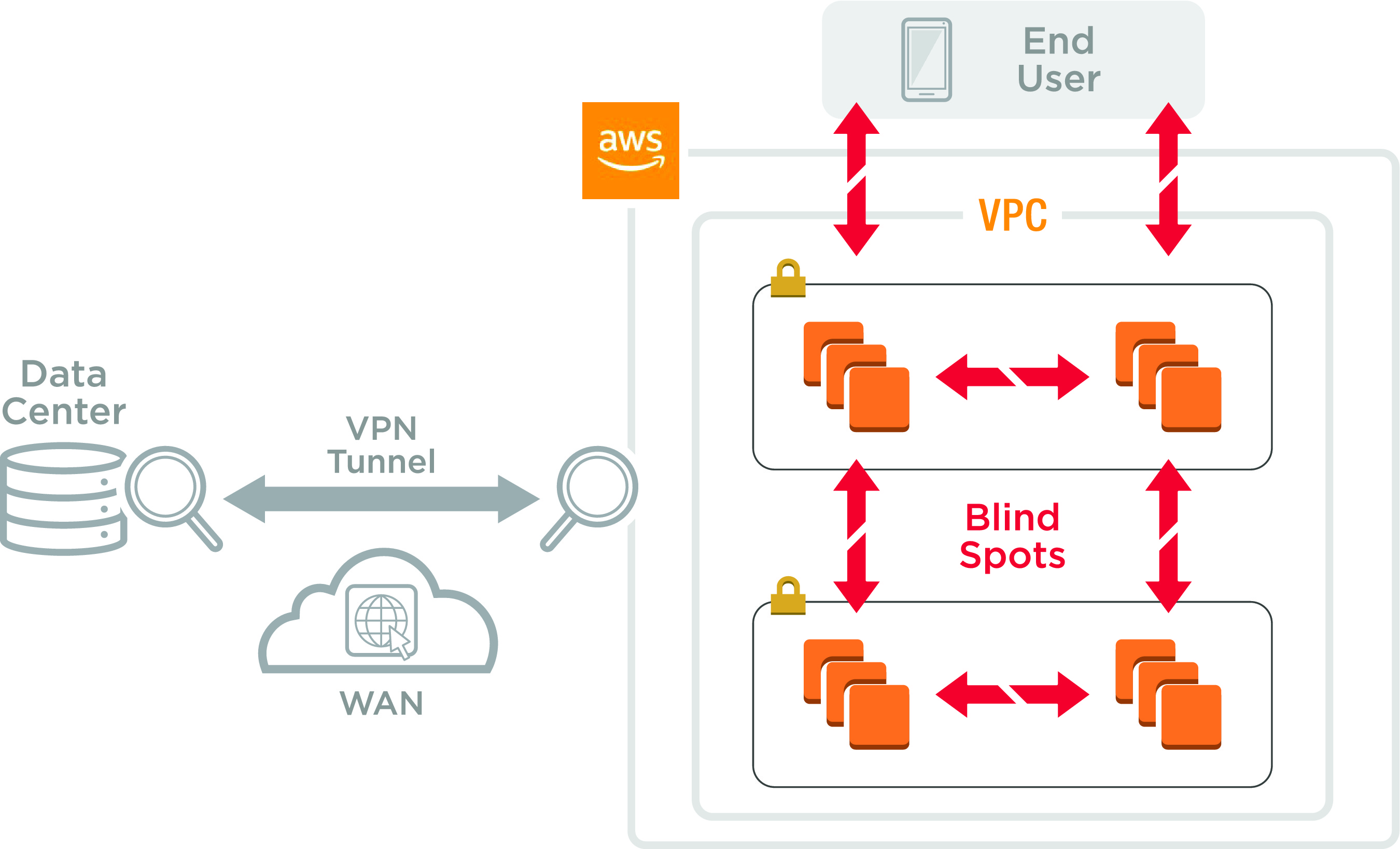 Many organizations run tens of thousands of instances in the cloud. Often, these are logically separated into different VPCs, using metadata tags. Different departments or teams within an organization can build their own VPCs, leading to monitoring challenges. For example, it’s possible, even likely, there will be overlapping IP addresses in different VPCs. Managing thousands of instances and the amount of traffic this creates, while dealing with potential IP address overlap, must be considered in a cloud visibility architecture.

A well-architected cloud workload is designed to auto-scale to meet peak demand and contract when demand subsides. As applications scale to meet demand, new instances are created and destroyed dynamically. To be effective, a cloud visibility solution should accommodate the dynamic nature of events, without requiring manual VPC architecture changes or significantly modifying security group policies.

To best expose native security capabilities of AWS, a visibility solution needs to integrate with the parameters available. One way to do this is to have visibility tools sit within the same VPC as workload instances. A key consideration for secure monitoring is ensuring that security policies configured for your workload and monitoring tool instances are applied to your AWS Cloud visibility.

If cloud visibility management components are in a separate VPC, like when using a virtual machine, you would have to configure and manage the security of that environment separately, leaving room for error. If that visibility node goes down, all the traffic being monitored and delivered to tools will go missing. This results in missing critical security events or indicators of compromise/breach.

Organizations migrate and adopt cloud services for many reasons, including cost-effectiveness. It is counterproductive to guess and size visibility for peak demand. A solution for cloud visibility should work like the cloud itself—pay-per-use and cost-effective. A non-cloud-native approach to visibility creates substantial incremental costs, including complexity costs in deploying, operating, and managing, ensuring uptime, and the potential lack of security capability. Each of theses requirements add to the total cost of ownership.

Ixia is an AWS Networking Competency Partner that built CloudLens to address cloud visibility with a cloud-native solution that is designed from the ground up to retain the cloud’s elastic scale, flexibility, and agility benefits.

There are two components of CloudLens that work together to enable visibility in the cloud:

CloudLens addresses the five requirements we started earlier in this post, because it does the following:

All of this is possible in a single platform because CloudLens is built to be cloud-native. It applies the tenets of containerization, dynamic orchestration, and is built as microservices. In contrast, a lift and shift solution is limited in which of these requirements it can address, and to what extent.
. 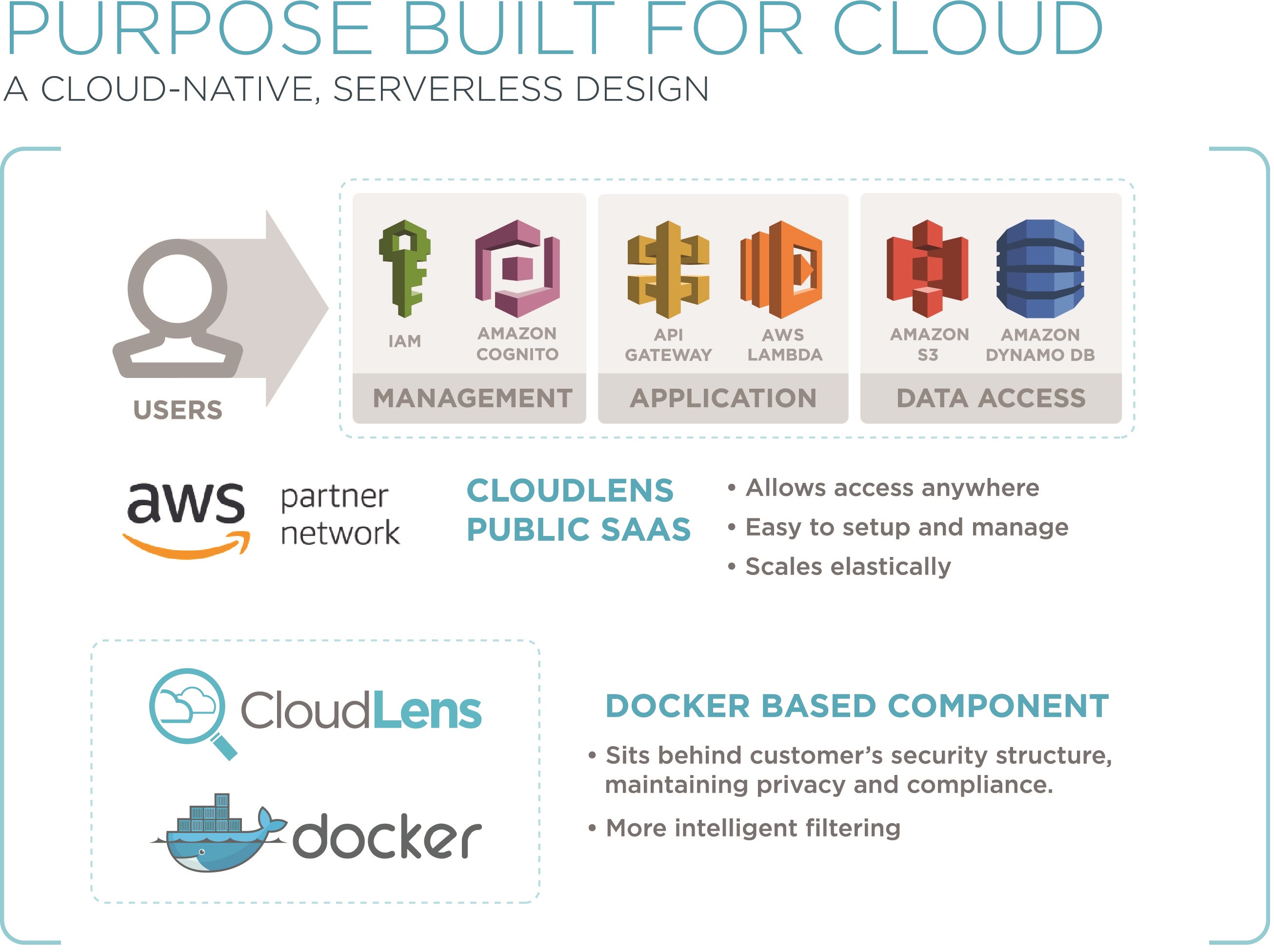 Figure 2 – CloudLens applies the tenets of containerization and is built as microservices.

CloudLens meets the five requirements of cloud visibility because of how its designed. Let’s examine each of the components of CloudLens and highlight how we leverage the AWS Cloud to deliver elastic scale, high availability, and a secure management portal.

AWS Lambda is at the core of CloudLens’s serverless architecture. AWS Lambda is designed to use replication and redundancy to provide high availability for both the service and the functions it operates, without maintenance windows or scheduled down times. Events are processed in milliseconds at whatever scale is required.

These combined features are designed to provide high availability, virtually unlimited scale, rapid elasticity, and high reliability of the CloudLens management portal. This allows Ixia to deliver a true software-as-a-service, without requiring customers to provision and manage their own VPC environment for visibility management software. 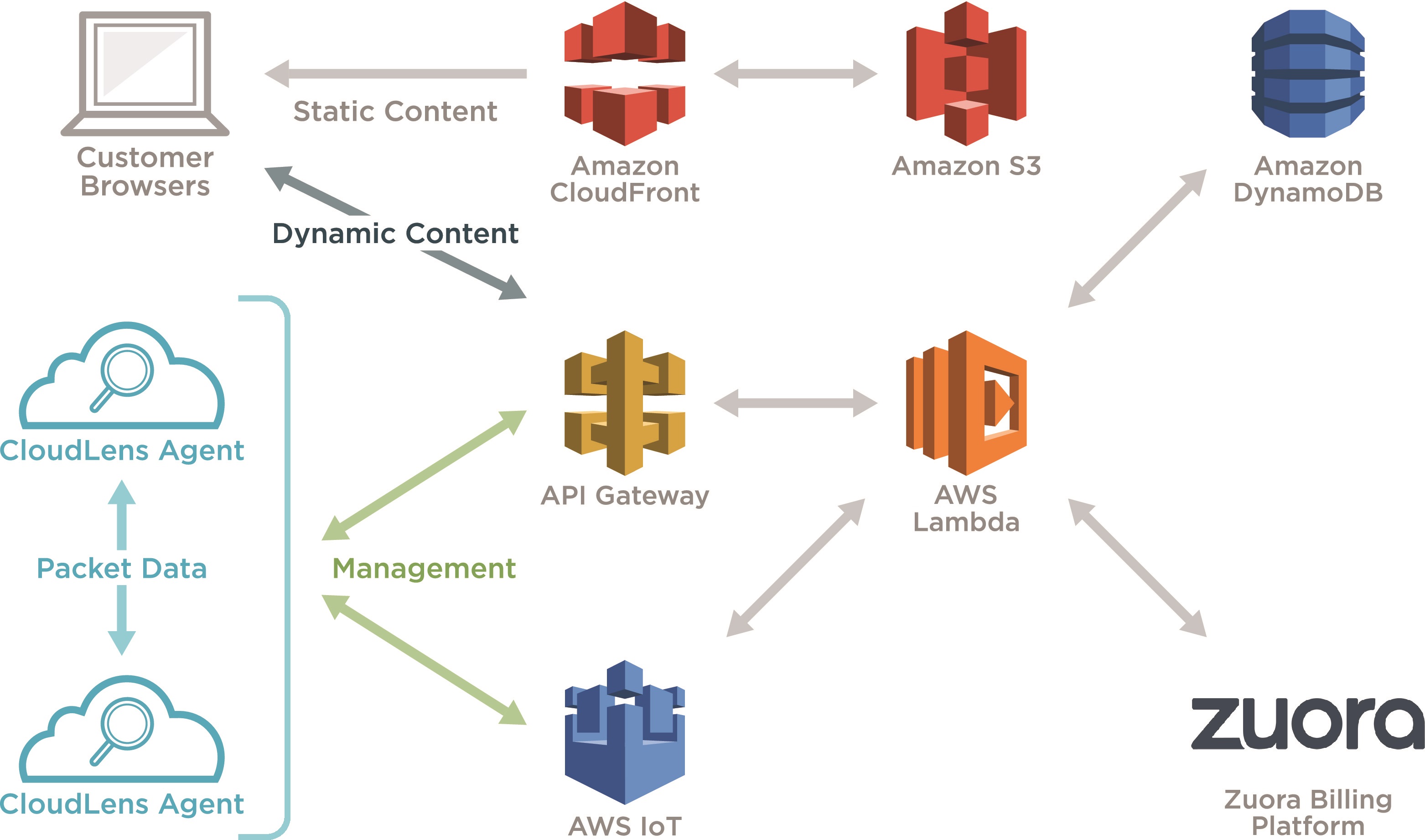 CloudLens uses the AWS IoT Core managed cloud platform to authenticate agents. It employs a bi-directional publish and subscribe model to allow agents to automatically “call home” to identify themselves to the backend portal. It also controls events to dynamically enforce configuration and operational changes on each CloudLens container.

Ultimately, our integration with Zuora on AWS allows CloudLens to deliver usage-based pricing with on-demand rapid turn-up and a free 45-day trial.

The management interface has a smart search capability, which allows users to create source and tool groups based on metadata. This information is auto-populated as search criteria in the management platform. The metadata can also be user defined, allowing maximum flexibility. As new instances are created, they are automatically added to groups based on their metadata. This retains scalability and elasticity in a cloud visibility solution. 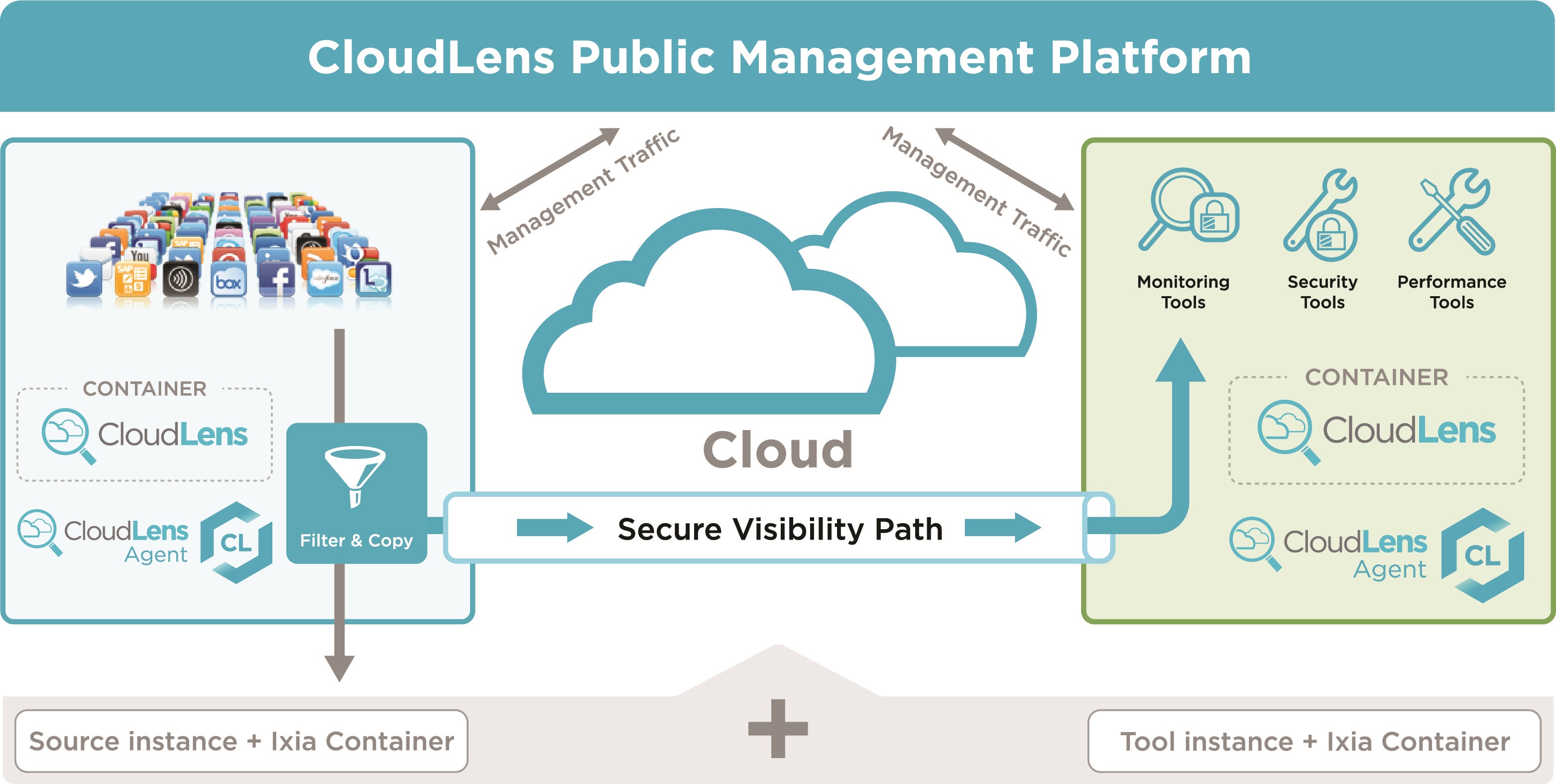 The next step in configuration is for users to associate source groups with tool groups to create an encrypted secure visibility path. In CloudLens, this is done in a point-and-click visual interface as shown in Figure 4. Once defined, the secure visibility path transfers filtered packet data from source to tool instances.

Together, the sensor, management platform, and secure visibility path address the challenge of providing visibility within AWS.

As enterprises move to AWS, visibility solutions that provide security and compliance are required. To scale, filtering rules cannot be static; rather they must be based on workload attributes and type of traffic. Ixia’s CloudLens has a serverless architecture that scales with distributed software systems built for cloud scale, which delivers intelligent, resilient, and proactive cloud visibility.

Visit the CloudLens website to learn how you can start eliminating the visibility blind spots of your AWS environment and access the data you need, where and when you need it.

Ixia is an AWS Competency Partner. A Keysight business, it helps enterprises, service providers, and governments accelerate innovation to connect and secure the world.