In this post, we will show you how to build a serverless microservice—a gaming leaderboard—that runs real-time search, aggregations, and joins on Amazon DynamoDB data.

Amazon DynamoDB is a fully-managed, serverless key-value and document database that delivers single-digit millisecond performance at any scale. Game developers build on Amazon DynamoDB for its scalability, durability, and consistency.

For microservices that predominantly write data, DynamoDB provides an “always on” experience at scale without the need for careful capacity planning, resharding, and database maintenance. These capabilities make DynamoDB a popular database service for various parts of game platforms like player data, game state, session history, and leaderboards.

To incentivize players, game developers turn to real-time interactive leaderboards, which can be microservices and operate independently from the core game design. A leaderboard entices competition among players by continuously adding, removing, and updating rankings across millions of users concurrently to display users’ relative placement in real-time.

Key-value stores were not designed for analytics and support a limited number of query operators and indexes. That’s why it’s a best practice to pair Amazon DynamoDB with an analytics solution like Rockset that automatically indexes your data for fast search, aggregations, and joins at scale.

Rockset is an AWS Partner Network (APN) Select Technology Partner whose real-time indexing database in the cloud is used for real-time analytics at scale.

Amazon DynamoDB is Built for Write-Heavy Workloads at Scale

With DynamoDB, developers get the same single-digit millisecond performance at any scale, supporting peaks of more than 20 million requests per second. Furthermore, operating a game at scale does not come with overhead costs as DynamoDB is serverless.

Like other NoSQL databases, speed and scale come at the expense of flexibility. DynamoDB requires developers to identify the access patterns of their application and limit the number of data requests over the network.

For example, when retrieving game session information, it’s a best practice to retrieve start times, end times, users, and other properties using a single query. Designing the data model in DynamoDB requires forethought of what data properties will need to be retrieved, and when, in a gaming application.

For core gaming features, optimizing for the access patterns of the application is necessary to achieve speed at scale. For other analytical use cases where a couple seconds of data delay is sufficient, it makes sense to pair DynamoDB with a system that has greater flexibility at query time and support for search, aggregations, and joins.

Rockset is Built for Read-Heavy Workloads at Scale

Offloading read-heavy microservices gives game developers greater flexibility, as the data model used for writes does not need to carry over for reads.

As Rockset indexes the data, queries can easily be added or modified without being limited by the data modeling in DynamoDB. This makes it faster and easier to spin up new read-heavy microservices.

Rockset adopts the same serverless model as Amazon DynamoDB, obviating the need for software and hardware configuration and maintenance. As the number of new data-driven microservices grows, the infrastructure team at gaming companies can continue to stay lean.

The native integration with DynamoDB ensures new data is reflected and queryable in Rockset with only a few seconds delay. For read-heavy workloads, such as leaderboards, this allows game players to get updated scores within a couple of seconds.

Rockset uses a built-in connector with DynamoDB streams API for the data to constantly stay in sync. DynamoDB tables are initially linearly scanned, and then Rockset switches to the streams API to maintain a time-ordered queue of updates. With Rockset’s built-in connector to DynamoDB, a game developer does not need to build or manage their own integration with DynamoDB streams.

Leaderboard queries need to aggregate player scores and join attributes across Amazon DynamoDB tables. Gaming data that’s stored in DynamoDB may contain heavily nested arrays and objects, mixed data types, and sparse fields. Many analytical backends require upfront schema definition (if they are SQL databases), or do not support joins (if they support flexible schemas). This can make leaderboard queries challenging to execute.

Rockset has native support for search, aggregation, and joins, and does not require data prep to run queries on JSON, CSV, XML, Avro, or Parquet data. At the time of ingest, Rockset automatically indexes your data in an inverted index for search and filter queries, a column index for large range scans, and a row index for random reads.

In Rockset, a leaderboard query uses the columnar index, fetching, and aggregating data only from the columns required, such as game scores and the gamer profile. When the dataset has a large number of columns, this leads to significant performance gains over a more traditional row-based approach since only a small fraction of the total data needs to be processed.

In contrast, you may want to use Rockset to search for individual player scores or attributes. These types of queries use the inverted index, fetching a list of records that match a selective predicate (player ID, for example). This means queries using selective predicates in Rockset return in tens of milliseconds regardless of the size of your dataset.

Leaderboards need to compute millions of gamers’ positions in near real-time. With a disaggregated underlying architecture, Rockset can scale ingest compute, storage, and query compute independently to support these high queries per second (QPS) workloads.

If you need faster queries and high QPS, Rockset can horizontally scale out resources efficiently for your microservice. Gamers select DynamoDB for the scalability of writes and want the same scalability for reads, without the overhead of infrastructure maintenance.

Take a look at the architecture for building a real-time leaderboard using Amazon DynamoDB and Rockset. Gamer-generated data is written to DynamoDB, and the Scan and Stream API keeps Rockset in sync and makes new data queryable with only a two-second delay.

How to Create a Leaderboard

We generated mock data of a fantasy soccer game to demonstrate how to build a real-time leaderboard using Amazon DynamoDB and Rockset.

Fantasy football or fantasy soccer is a game in which participants assemble an imaginary team of real-life footballers and score points based on those players’ actual statistical performance or their perceived contribution on the field of play. Fantasy games are very popular, with most variants having millions of players worldwide.

In fantasy soccer, points are gained or deducted depending on players’ performances each game week. Points systems vary between games, but points are typically awarded for achievements like scoring a goal, earning an assist, or keeping a clean sheet.

For the purpose of this demo, teams will consist of seven players—a typical selection would include a goalkeeper, four outfield players, and two substitutes. We’ll assign random points to each soccer player each week. To model this game, we used three tables—Gamers, Soccer_Players, and Gamer_Teams.

For demo purposes, we modeled the fantasy soccer demo application with three tables. Note that in most application use cases, you can store related items close together on the same DynamoDB table. For more info, please refer to our documentation on Best Practices for Modeling Relational Data in DynamoDB.

The Gamers table stores information about gamers playing the game. 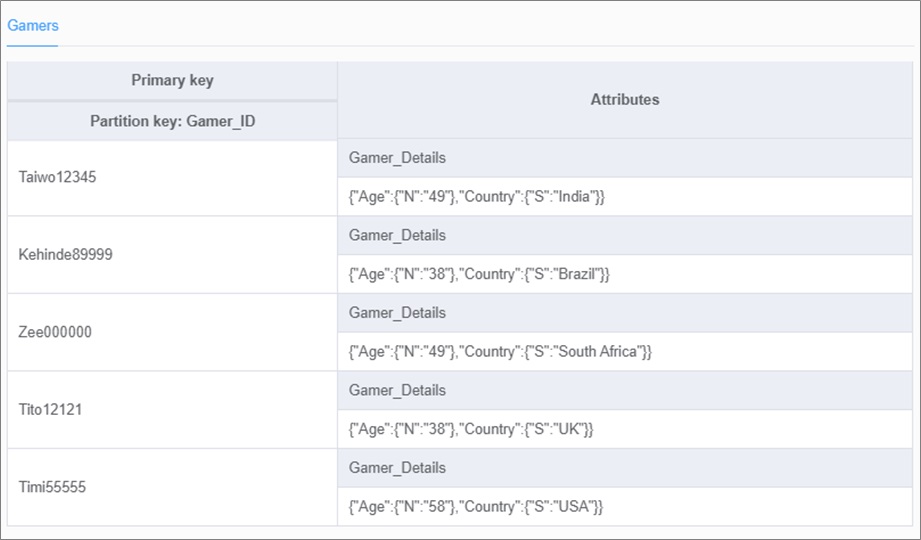 The Soccer_Players table contains information about soccer players that can be selected by gamers each week. 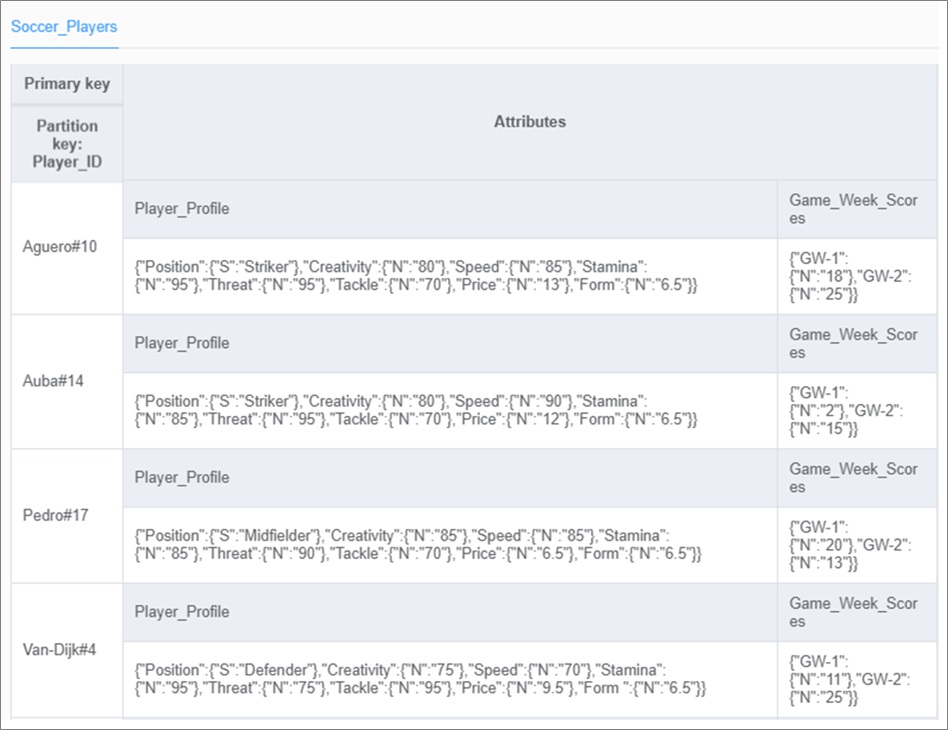 Finally, we will store teams selected by each gamer in the Gamer_Teams table. 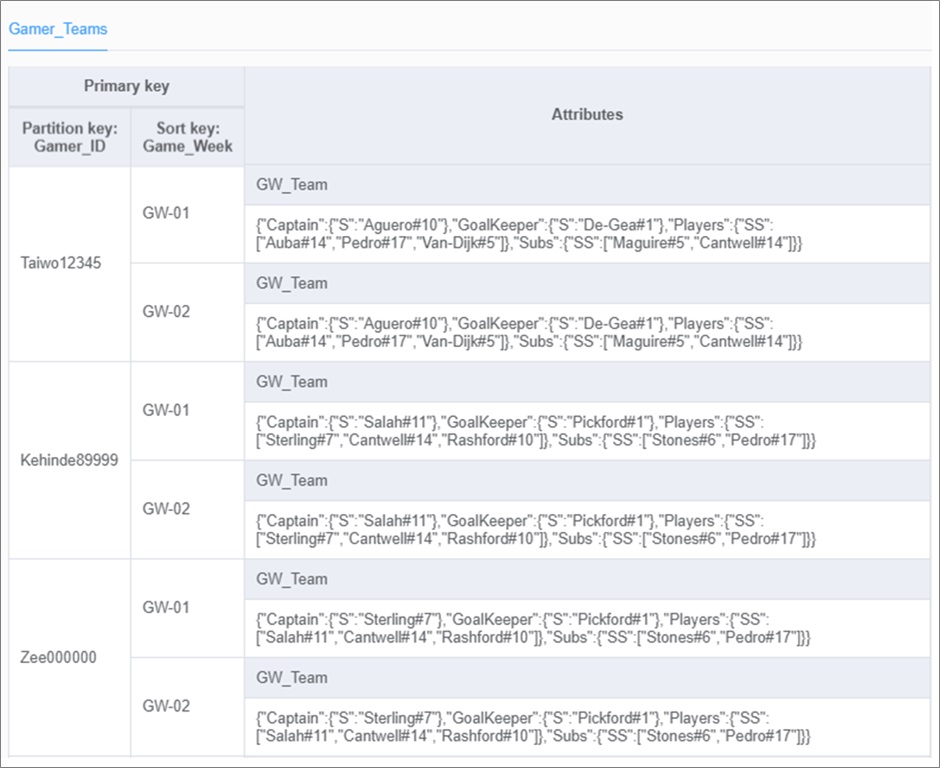 There are two steps to create an integration to Amazon DynamoDB:

These permissions enable Rockset to read and index the data from DynamoDB. Find the step-by-step integration instructions in the Rockset docs.

Rockset uses a document-oriented data model, with collections being the equivalent of tables in the relational world. You can create a collection in the Rockset console or programmatically using the REST API or a client software developer kit (SDK), including Python, Node.js, Java, or Golang. 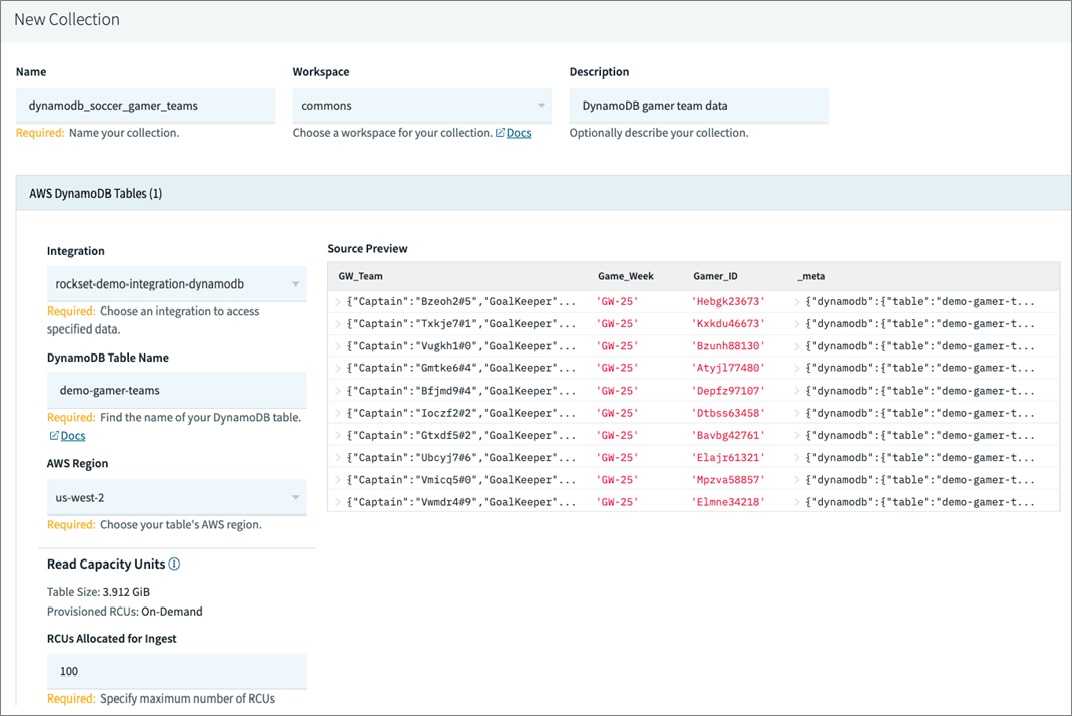 Figure 5 – A preview of the data is automatically generated as a SQL table.

We’ll also create an API and hit the endpoint every second so the latest scores are captured and displayed in the application. We can write the scores to soccer_score_totals collection to calculate an overall ranking of the gamer teams.

Rockset supports ANSI SQL with certain extensions for nested objects and arrays. You’ll see in the SQL below that we are aggregating the current gamer teams’ scores to display in near real-time.

To aggregate the scores, the SQL query makes use of the UNNEST function that can be used to expand arrays or values of documents to be queried. The query also highlights all of the other SQL goodness—sorts, joins, and aggregations.

Here’s the query results generated from the console: 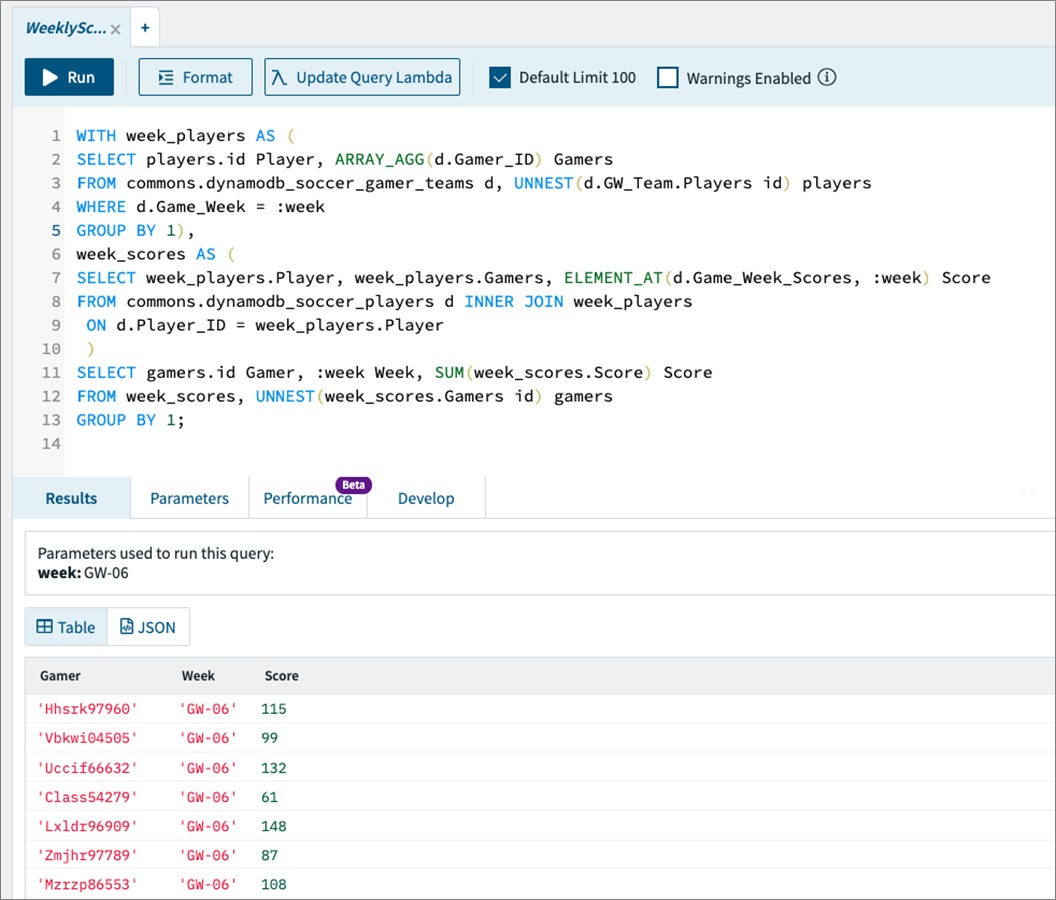 Each week, new scores are generated. Rather than use a set value for the week, we can use a parameter in Rockset to specify the values in the SQL query at runtime. 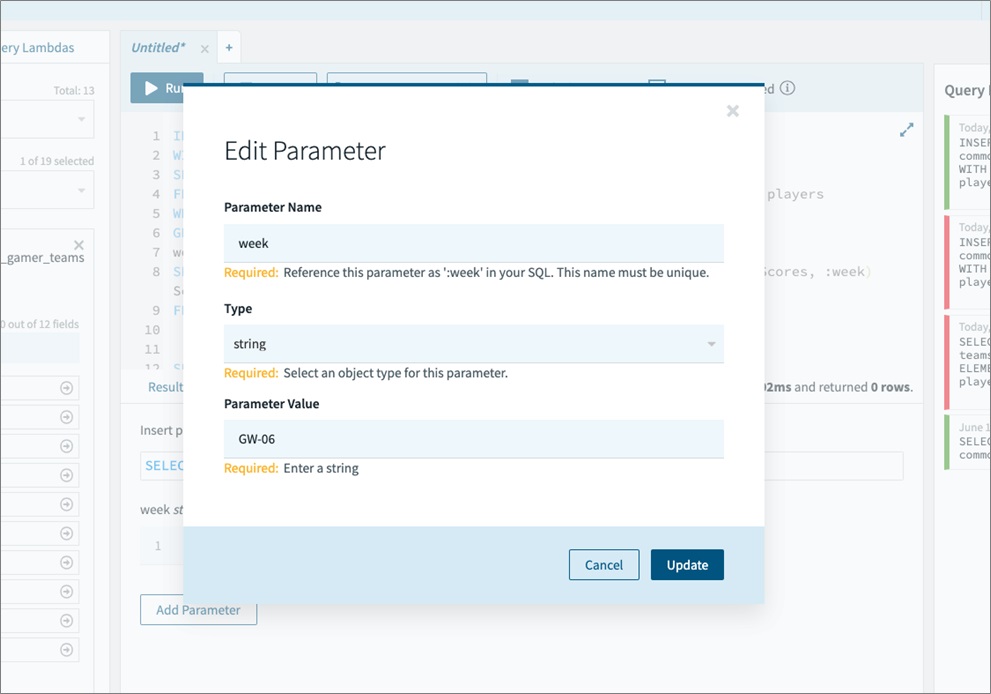 Figure 7 – A parameter in Rockset can specify the values in the SQL query at runtime.

We can sum the total week’s scores to get a ranking of the gamer teams using the query below. 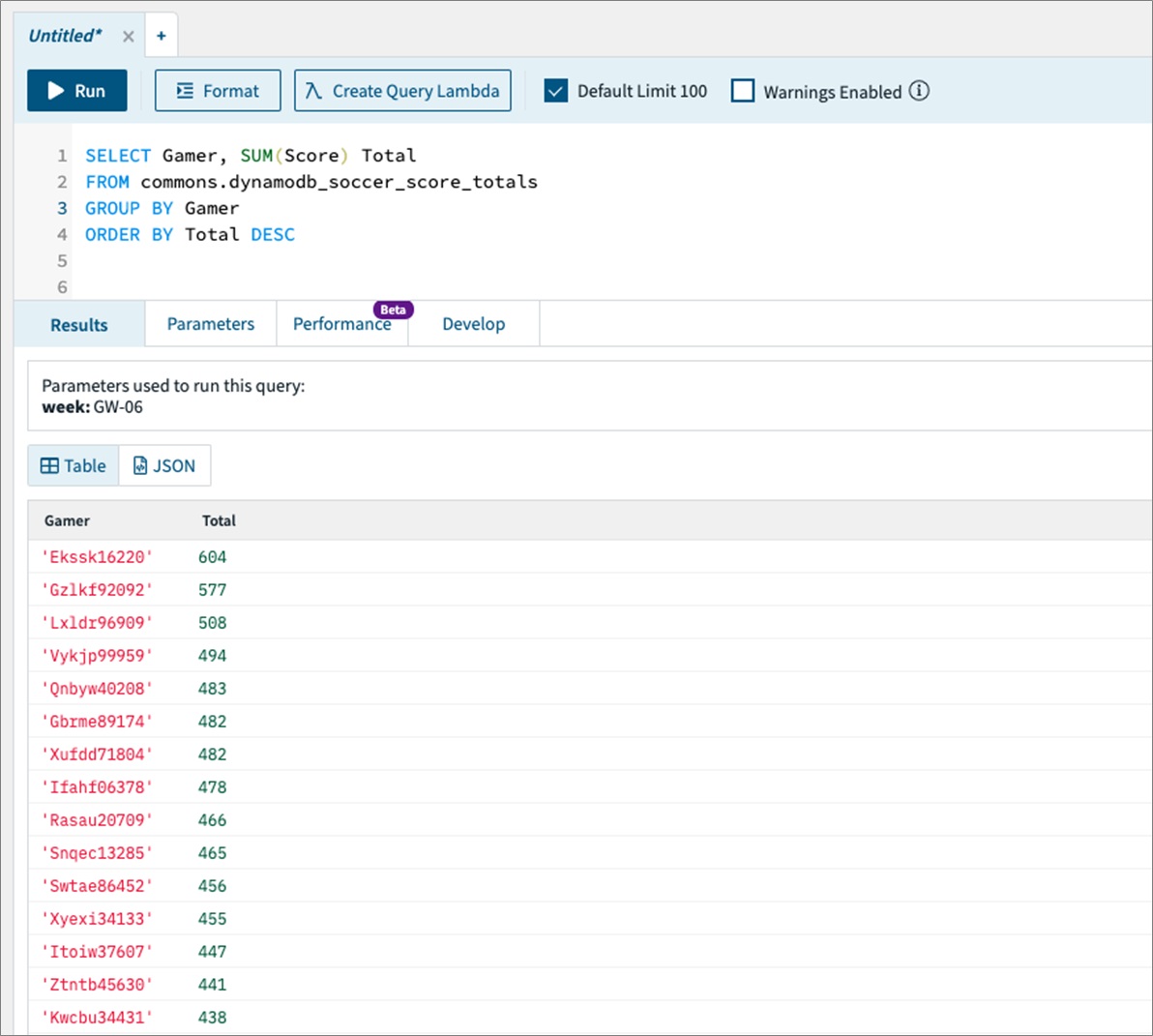 Figure 8 – We can sum the total week’s scores to get a ranking of the gamer teams.

The query we just ran in the Rockset console can be saved as a REST endpoint to create an API, also known as a Query Lambda. We can specify a default parameter value, like week-, or let the default be set at the query runtime. With a Query Lambda, we can save the query and run it directly from the application. 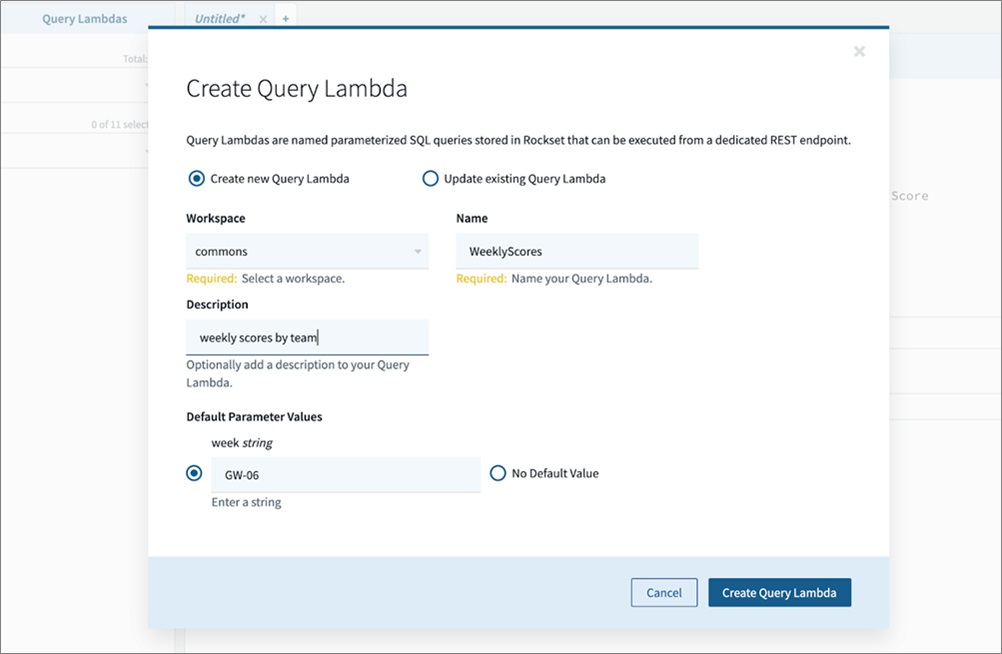 Figure 9 – Save the query and run it directly from the application using a Query Lambda.

We take the Query Lambda and execute it from a curl REST endpoint. 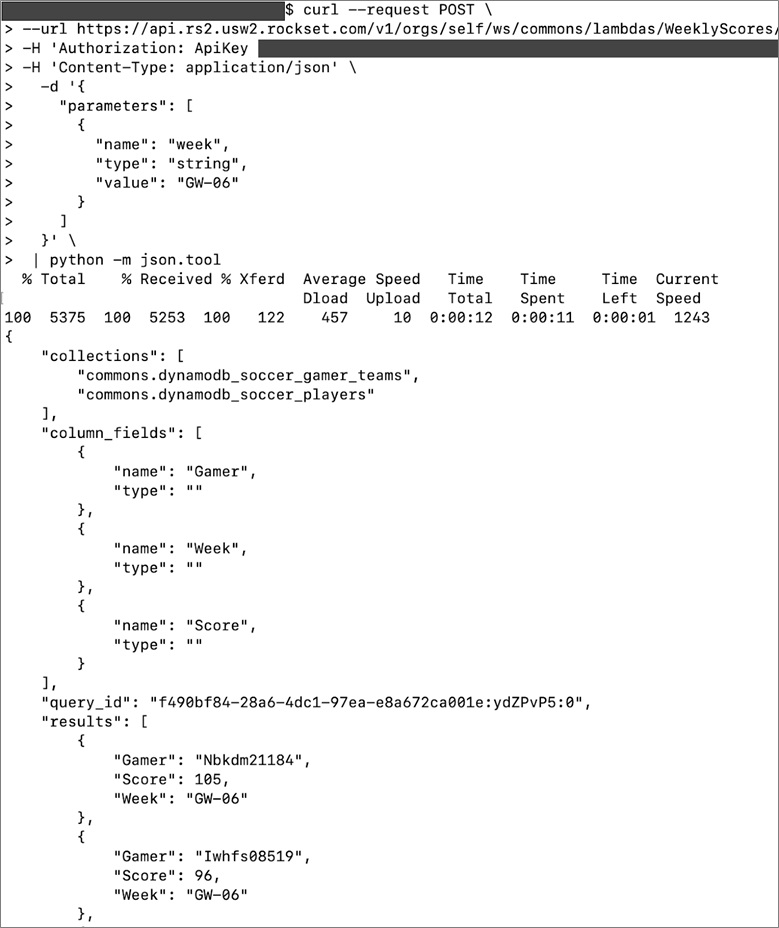 Figure 10 – Execute the Query Lambda from a curl REST endpoint.

We can use Rockset’s inverted index to find the total score for a single gamer team. In a fantasy soccer game, this query could be triggered on login to display the gamer team’s score. 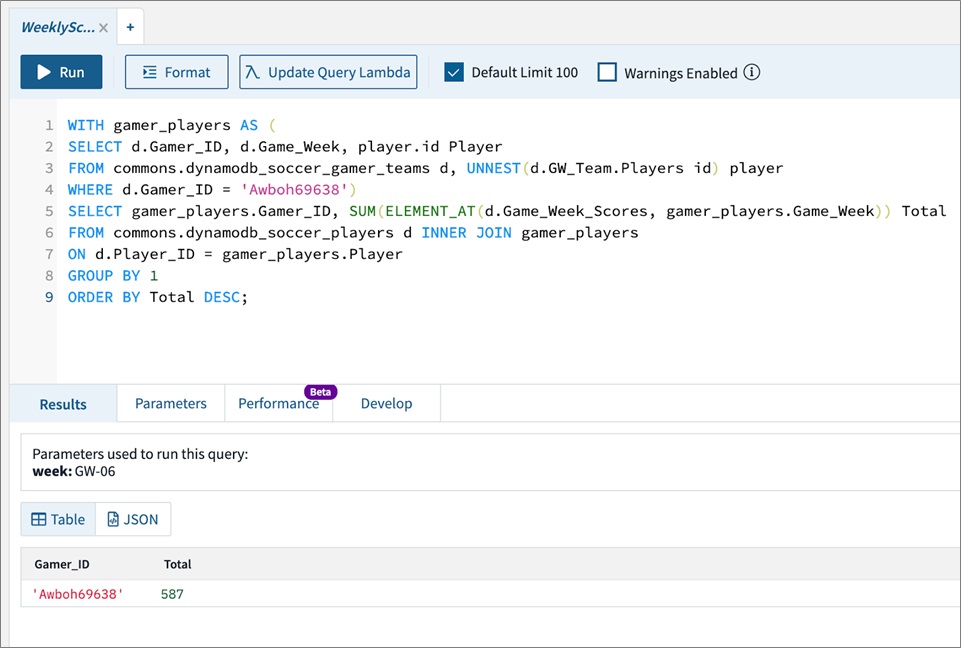 Figure 11 – Search queries, even when run on large datasets, return results in milliseconds.

With Amazon DynamoDB and Rockset, you have the flexibility to build read-intensive microservices independently of how the data is stored and modeled for the core gaming application.

Developers can synchronize data from DynamoDB to Rockset, run SQL queries on their data, and create APIs without needing to manage indexes, infrastructure, or schemas. The simplicity of Rockset gives developers the ability to quickly iterate on their game development and find new ways to monetize, engage, and grow adoption of their game.

Rockset is an APN Select Technology Partner whose real-time indexing database in the cloud is used for real-time analytics at scale.