In the Works – AWS Region in Melbourne, Australia

We launched new AWS Regions in Italy and South Africa in 2020, and are working on regions in Indonesia, Japan, Spain, India, and Switzerland. 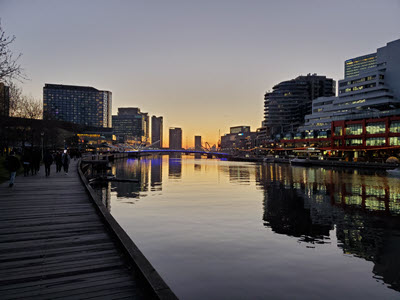 Today I am happy to announce that the Asia Pacific (Melbourne) region is in the works, and will open in the second half of 2022 with three Availability Zones. In addition to the Asia Pacific (Sydney) Region, there are already seven Amazon CloudFront Edge locations in Australia, backed by a Regional Edge cache in Sydney.

As part of our commitment to the Climate Pledge, Amazon is on a path to powering our operations with 100% renewable energy by 2025 as part of our goal to reach net zero carbon by 2040. To this end, we have invested in two renewable energy projects in Australia with a combined 165 MW capacity and the ability to generate 392,000 MWh annually.

The new region will give you (and hundreds of thousands of other active AWS customers in Australia) additional architectural options including the ability to store backup data in geographically separated locations within Australia.

AWS in Australia
I have made several trips to Australia on behalf of AWS over the last 4 or 5 years and I always enjoy meeting our customers while I am there.

Our Australian customers use AWS to accelerate innovation, increase agility, and to drive cost savings. Here are a few examples:

Commonwealth Bank of Australia (CBA) – As Australia’s leading provider of personal, business, and institutional banking services, CBA counts on AWS to provide infrastructure that is safe, resilient, and secure. They are long-time advocates of cloud computing and have been using AWS since 2012.

XY Sense – Based in Melbourne, this startup is using smart sensors and ML-powered analytics to create technology-enabled workplaces. Their sensor platform takes advantage of multiple AWS services including IoT and serverless, and processes over 7 billion anonymous data points each month.

Versent – Also based in Melbourne, this partner comprises a group of specialist consultants and a product company by the name of Stax. Versent recently helped Land Services South Australia to modernize their full tech stack as part of a shift to AWS (ready the case study to learn more).

Deloitte Australia – As an AWS Strategic Global Premier Partner since 2015, Deloitte Australia works with business and public sector agencies, with a focus on delivery of advanced products and services. As part of their work, over 4,000 employees across Deloitte have participated in the Deloitte Cloud Guild and have strengthened their cloud computing skills as a result.

Investing in Developers
Several AWS programs are designed to help to create and upskill the next generation of developers and students so that they are ready to become part of the next generation of IT leadership. AWS re/Start prepares unemployed, underemployed, and transitioning individuals for a career in cloud computing. AWS Academy provides higher education institutions with a free, ready-to-teach cloud computing curriculum. AWS Educate gives students access to AWS services and content that are designed to help them build knowledge and skills in cloud computing.

Stay Tuned
As I noted earlier, the Asia Pacific (Melbourne) Region is scheduled to open in the second half of 2022. As always, we’ll announce the opening in a post on this blog, so stay tuned!