Password rotation is a commonly accepted security best practice. In fact, password rotation is enforced in many organizations to reduce the risk of password-based attacks or exploits. Password policies encourage users to use strong passwords by enforcing a set of rules like password length and use of special characters. However, manually rotating passwords under stringent password policies can quickly turn into password fatigue, which may actually increase the risk of an exploit.

SAP ABAP systems support user name and password as basic authentication credentials. Typically, humans interacting with the SAP system are required to change or rotate their corresponding account password with certain frequency. Usually this is handled interactively during the login phase.

It is common that SAP ABAP systems use basic authentication credentials for administrative purposes. Consider the case of background job scheduling. Typically, user accounts configured for background jobs are set to a non-interactive type, remain unlocked and the lifespan of the corresponding password is long. This is a common finding during security audits.

Interfaces with the SAP ABAP system, whether it is for system monitoring or data processing purposes, are another common example of system login with basic authentication credentials. A good example of this is described in one of our previous blogs: A serverless approach using Amazon CloudWatch.

Best practices described in the Identity Management section of the Security Pillar in the AWS Well-Architected Framework recommend to audit and rotate credentials periodically and store and use secrets securely, using AWS Secrets Manager. In fact, more specifically, rotation of security keys is a common recommendation in the SAP Lens for the AWS Well-Architected Framework

In this blog we will show you how AWS Secrets Manager can be used to align your SAP systems with the best practices described in the AWS Well-Architected Framework. AWS Secrets Manager provides a secure, scalable, auditable and accessible store for secrets. In this case the secret rotation capability of AWS Secrets Manager is extended to rotate SAP user credential passwords through an AWS Lambda function.

The architecture of this solution is in figure 1. SAP user passwords are stored as secrets in AWS Secrets Manager. These secrets are configured to rotate according to the schedule you set up. To rotate a secret, AWS Secrets Manager calls an AWS Lambda function. Upon successful rotation of the secret, the AWS Lambda function uses PyRFC and the SAP NetWeaver RFC SDK to establish an RFC connection to SAP and call a standard SAP ABAP function to change the user’s password.

In our example the SAP password administrator corresponds to an SAP ABAP user called PWDAUTOCHNGR.

For better identification we used the following naming nomenclature for our secrets: <SID>CLNT<ABAP client>/<ABAP user ID>.

Figure 2 shows the value stored in a secret corresponding to user PWDAUTOCHNGR in client 001 of SAP system ECD. The secret name is ECDCLNT001/PWDAUTOCHNGR: 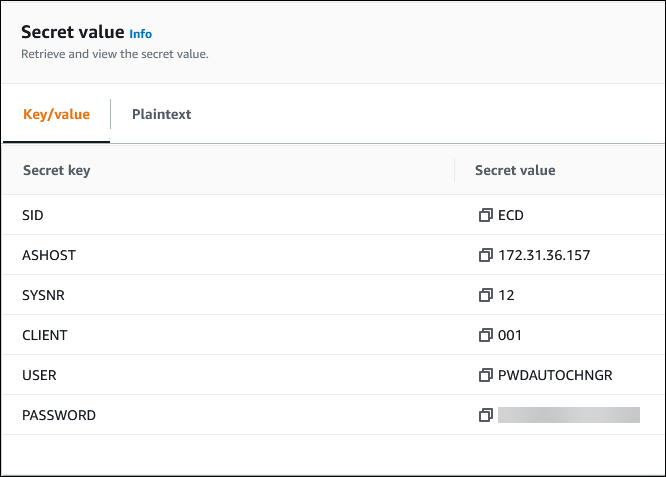 3. Store the credential you wish to rotate (those of the SAP user) in another AWS Secrets Manager secret, in our example it is called ECDCLNT001/LAMBDAUSR006.

Figure 3 shows the value stored in a secret corresponding to user LAMBDAUSR006 in client 001 for SAP system ECD. The connection to SAP will be done using SAP logon group PUBLIC because the SAP message server and port are specified in the secret: 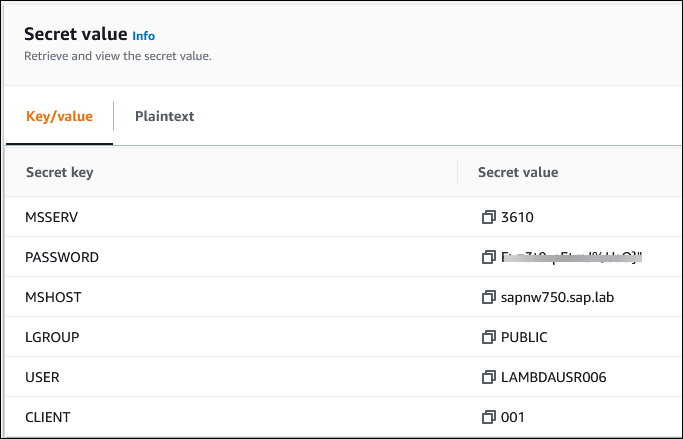 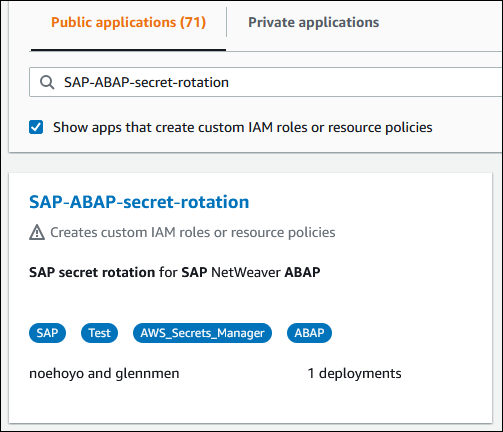 6. Choose SAP-ABAP-secret-rotation.
7. Provide the corresponding parameters and Deploy the application:

After a few minutes the AWS Lambda, Applications overview screen will show up. The deployed resources will be shown at the bottom of the screen (see example in figure 6). Note the AWS Lambda function name (Physical ID). 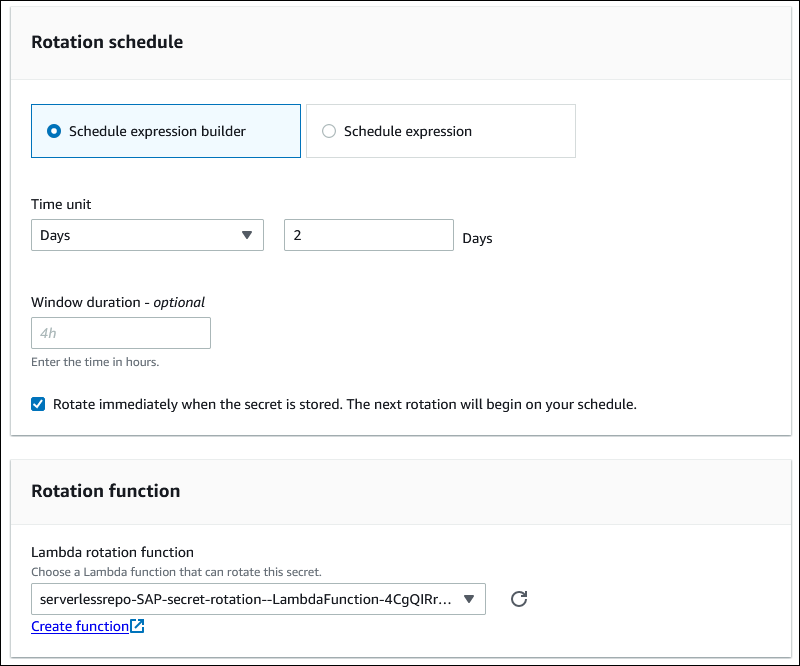 13. To check the results, Open AWS Lambda in the AWS Management Console.
14. Open the corresponding function and select Monitor, Logs (see example in Figure 8).
15. To look at the details of the function call open the most recent LogStream.

The following example shows the AWS CLI command to get the secret value for secret ECDCLNT001/LAMBDAUSR005 (see the output in Figure 9):

In this example we assume there are 20 different SAP ABAP systems each one with a monitoring user. The user credentials are stored in AWS Secrets Manager. The user password is retrieved every 5 minutes by an application. Credentials are changed once every month.

This blog post shows you how to rotate SAP user passwords automatically using AWS Secrets Manager and AWS Lambda functions. AWS Secrets Manager enables you to easily rotate, manage, and retrieve credentials for several AWS services. These features can be extended to implement password rotation for SAP users through API calls from an AWS Lambda function.

To find more customer-proven design principles and best practices to ensure your SAP workloads on AWS are well-architected check the SAP Lens for the AWS Well-Architected Framework. The SAP Lens is based on insights that AWS has gathered from customers, AWS Partners, and our SAP specialist community.