AWS Glue is a fully managed extract, transform, and load (ETL) service that makes it easy to prepare and load data for analytics. AWS Glue uses connections to access certain types of source and target data stores, as described in the AWS Glue documentation.

A connection contains the properties needed by AWS Glue to access a data store. These properties might include connection information such as user name and password, data store subnet IDs, and security groups.

If the data store is located inside an Amazon VPC, AWS Glue uses the VPC subnet ID and security group ID connection properties to set up elastic network interfaces in the VPC containing the data store. Doing this enables ETL jobs and crawlers to connect securely to the data store in the VPC.

AWS Glue can create this elastic network interface setup if the VPC containing the data store is in the same account and AWS Region as the AWS Glue resources. The security groups specified in a connection’s properties are applied on each of the network interfaces. The security group rules and network ACLs associated with the subnet control network traffic through the subnet. Correct rules for allowing outbound traffic through the subnet ensure that AWS Glue can establish network connectivity with all subnets in the VPC containing the data store, and therefore access the source or target data store.

In this blog post, we describe how to configure the networking routes and interfaces to give AWS Glue access to a data store in an AWS Region different from the one with your AWS Glue resources. In our example, we connect AWS Glue, located in Region A, to an Amazon Redshift data warehouse located in Region B.

AWS Glue requires a VPC with networking routes to the data stores to which it connects. In our solution, the security groups and route tables are configured to enable elastic network interfaces set up by AWS Glue in a private subnet to reach the internet or connect to data stores outside the VPC. The following diagram shows the necessary components and the network traffic flow. 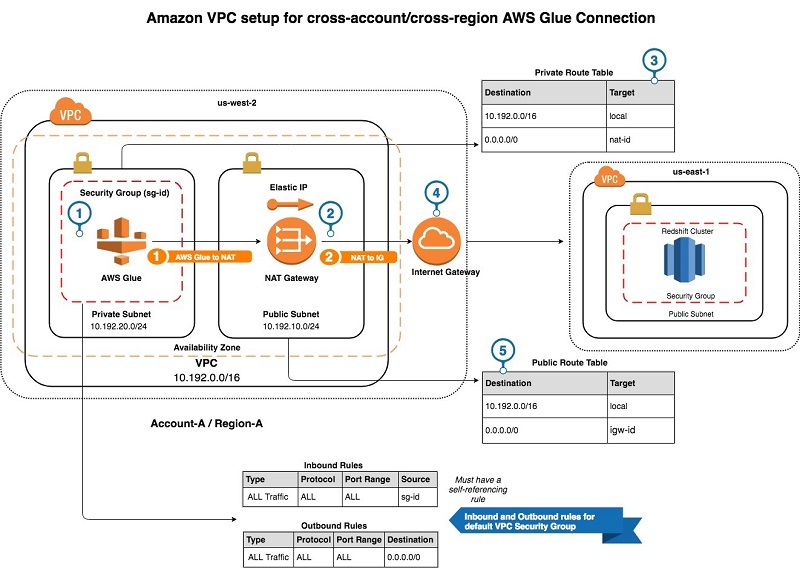 Note: We must update the default security group of the VPC to include a self-referencing inbound rule and an outbound rule to allow all traffic from all ports. Later in the example, we attach this security group to an AWS Glue connection to let network interfaces set up by AWS Glue communicate with each other within a private subnet.

Network traffic flow through the components:

The NAT gateway is present in a public subnet and has an associated Elastic IP address. It forwards network traffic from AWS Glue resources to internet by using an internet gateway.

When AWS Glue tries to establish a connection with a data store outside of the private subnet, the incoming network traffic on the data store side appears to come from the NAT Gateway.

You can automate the creation of a VPC and all the components described preceding using the vpc_setup.yaml CloudFormation template, hosted on GitHub. Follow these step-by-step instructions to create the stack in your AWS account:

Note: In this example, we create the AWS Glue resources and connection in the us-west-2 Region. You can change this to the AWS Region where you have your AWS Glue connection and resources.

You are directed to the AWS CloudFormation console, with the stack name and URL template fields pre-filled.

Before creating and testing an AWS Glue connection to your data store, you need an IAM role that lets AWS Glue access the VPC components that you just created.

For this example, we create a role called TestAWSGlueConnectionIAMRole with a managed IAM policy AWSGlueServiceRole attached to it. 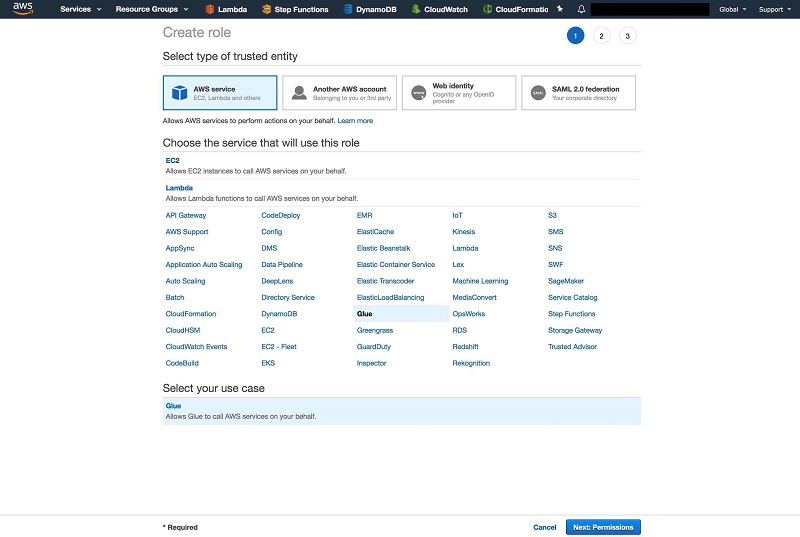 Note: The default GlueServiceRole policy that we attached to our custom role TestAWSGlueConnectionIAMRole has permissions for accessing VPC components. If you are using a custom policy instead of the default one, it should also contain the same permissions to be able to access VPC components. 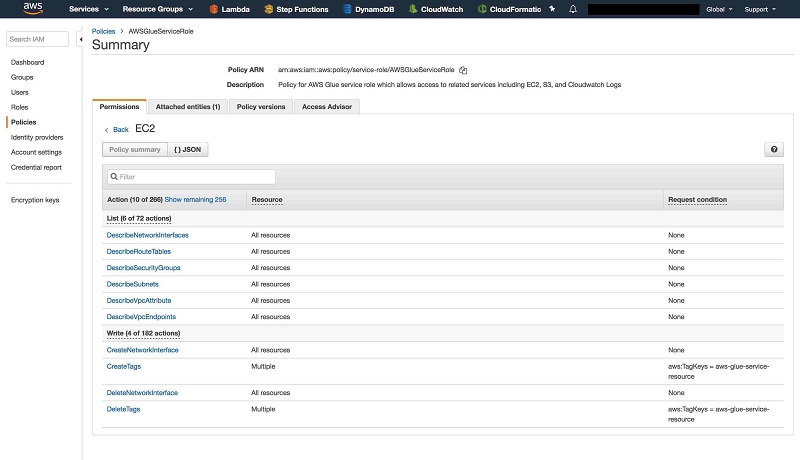 For this example, we create a sample Amazon Redshift cluster in a VPC in the US N. Virginia (us-east-1) Region. Follow these step-by-step instructions to create the stack in your AWS account: 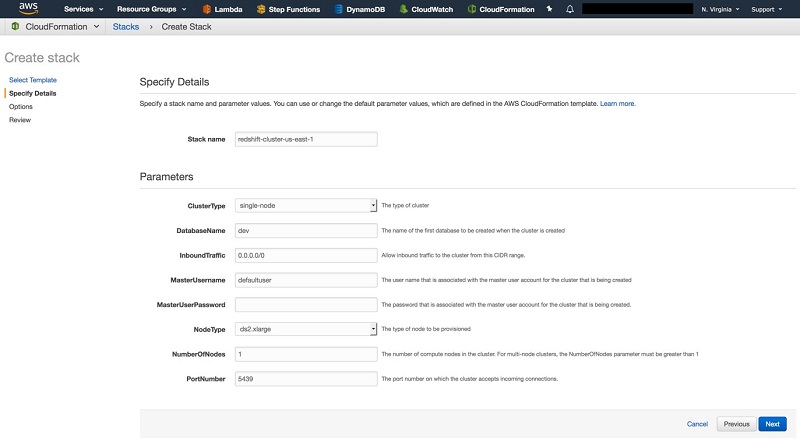 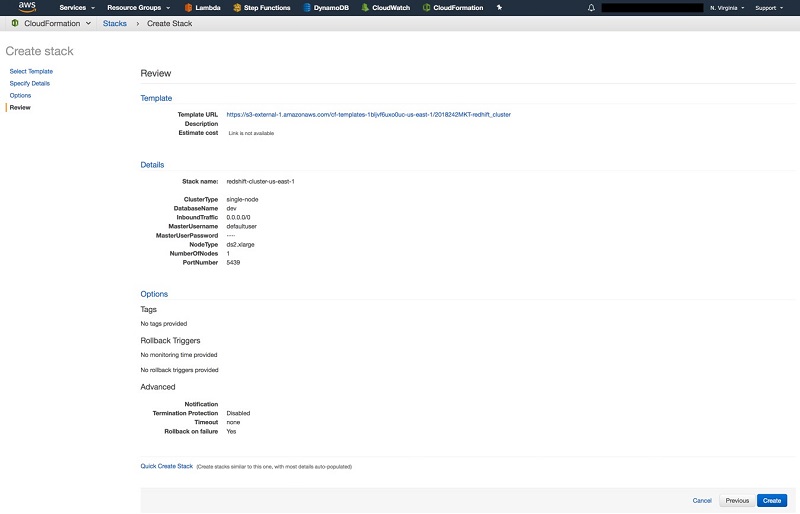 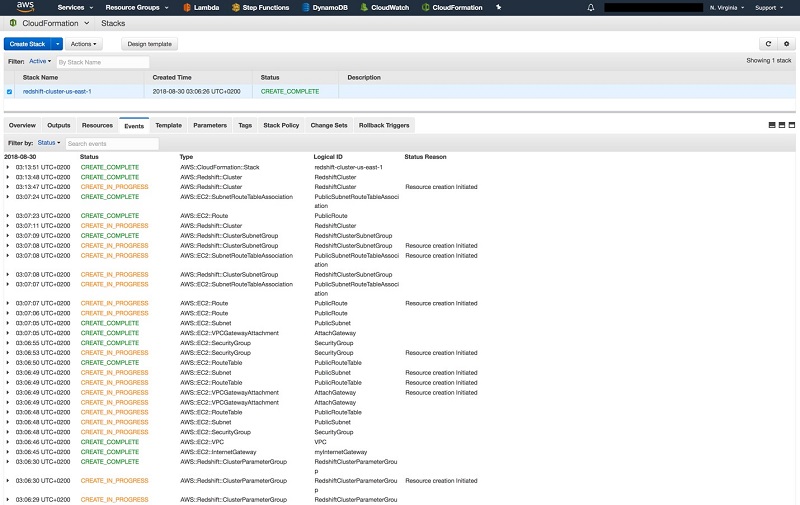 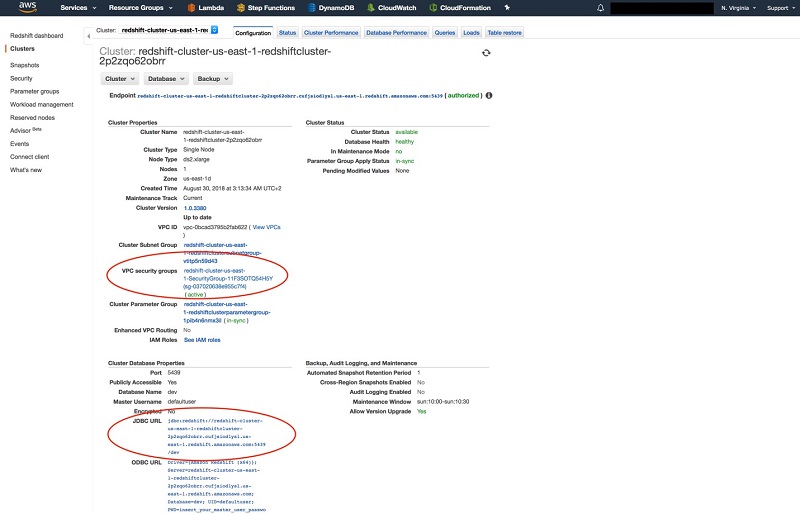 Now you have the required VPC setup, Amazon Redshift cluster, and IAM role in place. Next, you can create an AWS Glue connection and test it as follows: 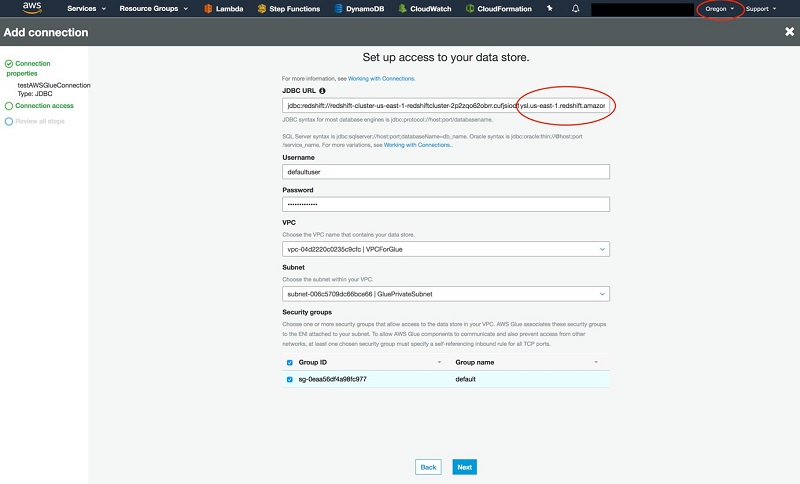 Note: We use the VPC (VPCForGlue) and the private subnet (GluePrivateSubnet) we created for this connection. For security groups, we use the default security group for the VPC. This security group has a self-referencing inbound rule and an outbound rule that allows all traffic.

The AWS Glue console should now show that the connection was created successfully.

Note: Completing this step just means that an AWS Glue connection was created. It doesn’t guarantee that AWS Glue can actually connect to your data store. Before we test the connection, we also need to allow Amazon Redshift to accept network traffic coming from AWS Glue.

As a best practice, before you use a data store connection in an ETL job, choose Test connection. AWS Glue uses the parameters in your connection to confirm that it can access your data store and reports back any errors.

By creating a VPC setup similar to the one we describe, you can let AWS Glue connect to a data store in a different account or AWS Region. By doing this, you establish network connectivity between AWS Glue resources and your data store. You can now use this AWS Glue connection in ETL jobs and AWS Glue crawlers to connect with the data store.

If you have questions or suggestions, please leave a comment following.

If you found this post helpful, be sure to check out Connecting to and running ETL jobs across multiple VPCs using a dedicated AWS Glue VPC, and How to access and analyze on-premises data stores using AWS Glue.