Question OPS2: How do you approach application lifecycle management?

This post continues part 1 of this Operational Excellence question. Previously, I covered using infrastructure as code with version control to deploy applications in a repeatable manner.

Create multiple temporary environments for new features you may need to prototype, and tear them down as you complete them. Temporary environments enable fine grained feature isolation and higher fidelity development when interacting with managed services. This allows you to gain confidence your workload integrates and operates as intended.

There are a number of ways to deploy separate environments for an application. To make the deployment simpler, it is good practice to separate dynamic configuration from your infrastructure logic.

For an application managed via the AWS Serverless Application Model (AWS SAM), use an AWS SAM CLI parameter to specify a new stack-name which deploys a new copy of the application as a separate stack.

This deploys a whole new copy of the application in the same account as a separate stack.

For the serverless airline example used in this series, deploy a whole new copy of the application following the deployment instructions, either into the same AWS account, or a completely different account. This is useful when each developer in a team has a sandbox environment. In this example, you only need to configure payment provider credentials as environment variables and seed the database with possible flights as these are currently manual post installation tasks.

However, maintaining an entirely separate codebase copy of an application becomes difficult to manage and reconcile over time.

As the airline application code is stored in a fork in a GitHub account, use git branches for separate environments. In typical development teams, developers may deploy a main branch to production, have a dev branch as staging, and create feature branches when working on new functionality. This allows safe prototyping in sandbox environments without affecting the main codebase, and use git as a mechanism to merge code and resolve conflicts. Changes are automatically pushed to production once they are merged into the main (or production) branch.

As the airline example is using AWS Amplify Console, there are a few different options to create a new environment linked to a feature branch.

You can create a whole new Amplify Console app deployment, either in a separate Region, or in a separate AWS account, which then connects to a feature branch by following the deployment instructions. Create a new branch called new-feature in GitHub and in the Amplify Console, select Connect App, and navigate to the repository and the new-feature branch. Configure the payment provider credentials as environment variables. 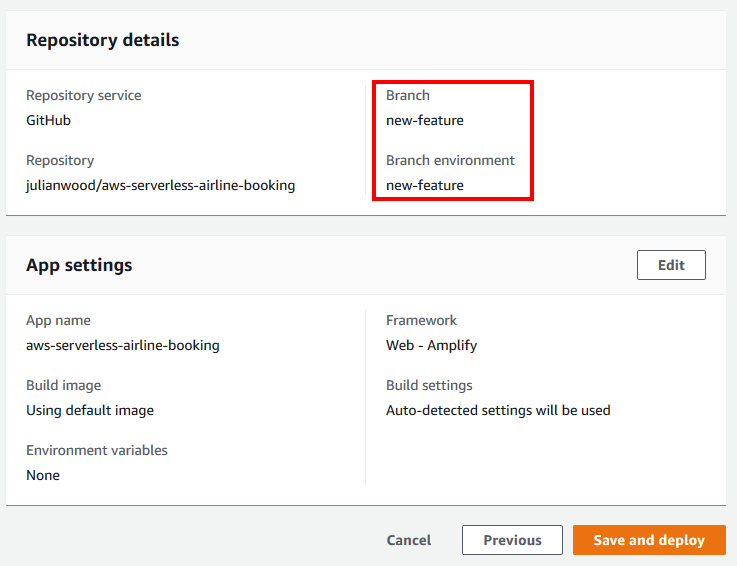 You can also connect the existing Amplify Console deployment to a git branch, deploying the new-feature branch into the same AWS account and Region.

In the Amplify Console, navigate to the existing app, select Connect Branch, and choose the new-feature branch. Create a new Backend environment to deploy the full stack. If the feature branch is only frontend code changes, you can choose to use the same backend components. 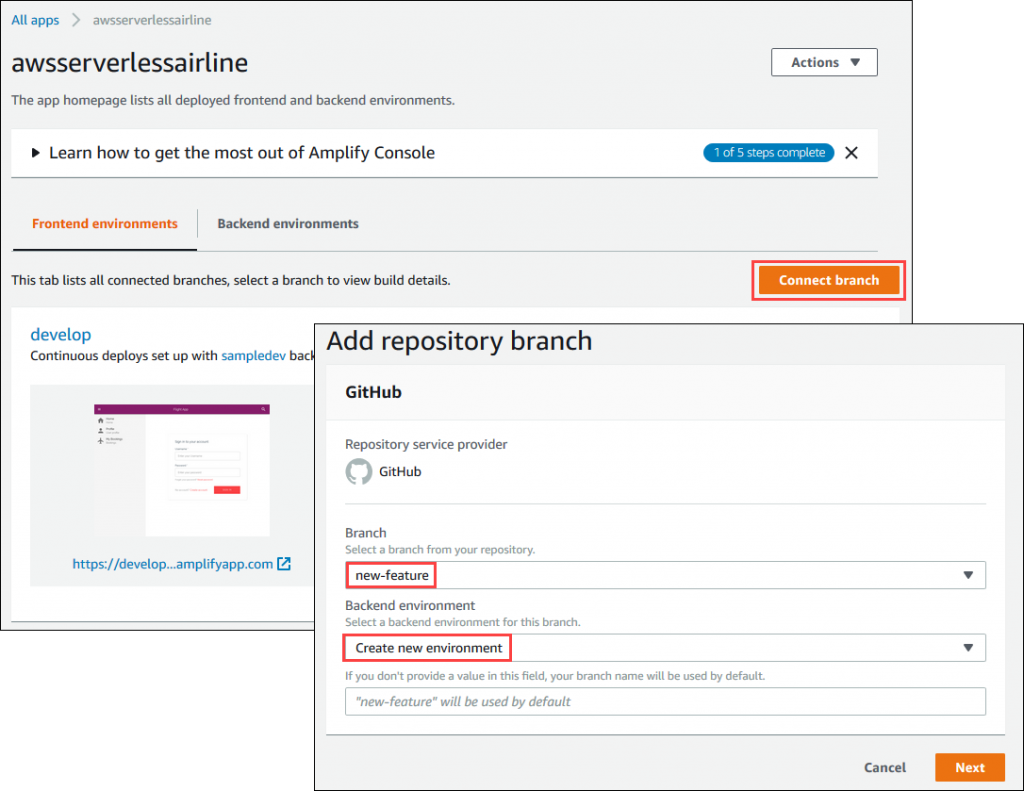 Amplify Console then deploys a new stack in addition to the develop branch based on the code in the feature-branch. 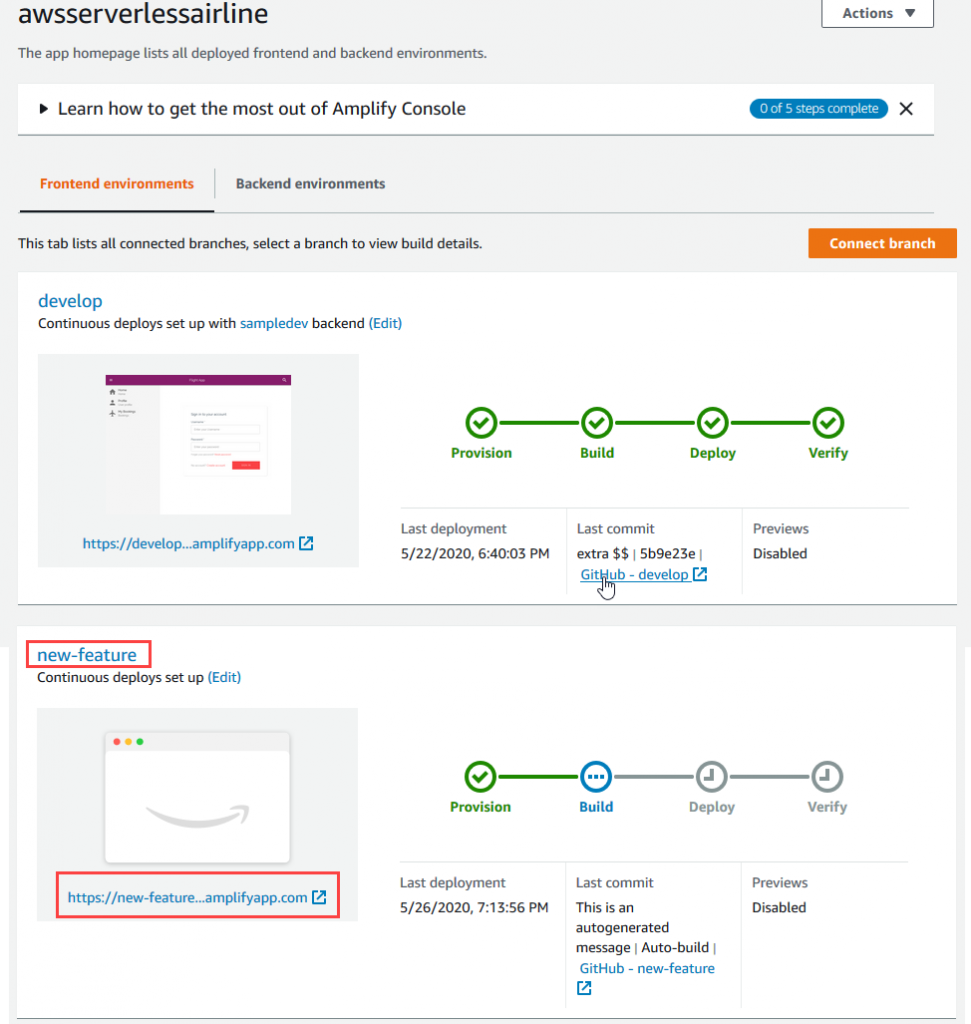 You do not need to add the payment provider environment variables as these are stored per application, per Region, for all branches.

Amplify environment variables for All Branches.

Using git and branching with Amplify Console, you have automatic deployments when any changes are pushed to the GitHub repository. If there are any issues with a particular deployment, you can revert the changes in git which will kick off a redeploy to a known good version. Once you are happy with the feature, you can merge the changes into the production branch which will again kick off another deployment.

As it is simple to set up multiple test environments, make sure to practice good application hygiene, as well as cost management, by identifying and deleting any temporary environments that are no longer required. It may be helpful to include the stack owner’s contact details via CloudFormation tags. Use Amazon CloudWatch scheduled tasks to notify and tag temporary environments for deletion, and provide a mechanism to delay its deletion if needed.

With AWS SAM or a third-party framework, you can run API Gateway, and invoke Lambda function code locally for faster development iteration. Local debugging and testing can help for quick confirmation that function code is working, and is also useful for some unit tests. Local testing cannot duplicate the full functionality of the cloud. It is suited to testing services with custom logic, such as Lambda, rather than trying to duplicate all cloud managed services such as Amazon SNS, or Amazon S3 locally. Don’t try to bring the cloud to the test, rather bring the testing to the cloud.

Here is an example of executing a function locally.

I use AWS SAM CLI to invoke the Airline-GetLoyalty Lambda function locally to test some functionality. AWS SAM CLI uses Docker to simulate the Lambda runtime. As the function only reads from DynamoDB, I use stubbed data, or can set up DynamoDB Local.

1. I pass a JSON event to the function to simulate the event from API Gateway, as well as passing in environment variables as JSON. Create sample events using sam local generate-event.

2. I run sam build GetFunc to build the function dependencies, in this case NodeJS.

3. I run sam local invoke passing in the event payload and environment variables. This spins up a Docker container, executes the function, and returns the result.

For production Lambda functions, it is best to deploy a new function version for every deployment. Versions can represent the stable version or reflect particular features. Create Lambda aliases which are pointers to particular function versions. Invoke Lambda functions using the aliases, with a specific alias for the stable production version. If an alias is not specified, the latest application code deployment is invoked which may not reflect a stable version or a desired feature. Use the new feature alias version for testing without affecting users of the stable production version. 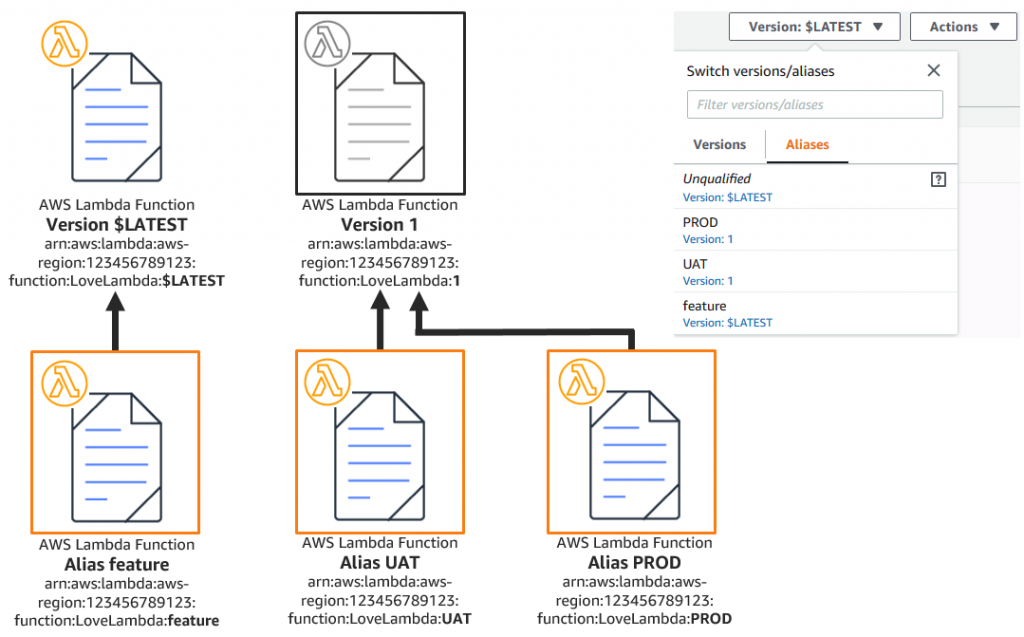 Use Lambda alias’ routing configuration to introduce traffic shifting to send a small percentage of traffic to a second function alias or version for a rolling deployment. This is commonly called a canary release.

For example, configure Lambda alias named stable to point to function version 2. A new function version 3 is deployed with alias new-feature. Use the new-feature alias to test the new deployment without impacting production traffic to the stable version.

During production rollout, use alias routing. For example, 90% of invocations route to the stable version while 10% route to alias new-feature pointing to version 3. If the 10% is successful, deployment can continue until all traffic is migrated to version 3, and the stable alias is then pointed to version 3. 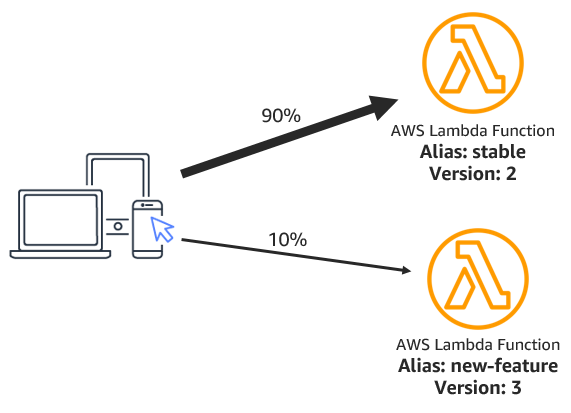 Pre-traffic and post-traffic Lambda functions can also verify if the newly deployed code is working as expected.

In the airline example, create a safe deployment for the ReserveBooking Lambda function by adding the example AWS SAM template code specified in the instructions. This migrates 10 percent of traffic every 10 minutes with CloudWatch alarms to check for any function errors. You could also alarm on latency, or any custom metric.

During the Amplify Console build phase, the safe deployment is initiated. Navigate to the CodeDeploy console and see the deployment in progress.

Selecting the deployment, you can see the Traffic shifting progress and the Deployment details.

Within Deployment details, select the DeploymentGroup, and view the CloudWatch Alarms CodeDeploy is using to test the rollout.

Within Deployment details, select the Application, select the Revisions tab, and select the latest Revision location and view the CurrentVersion and TargetVersion for this deployment. 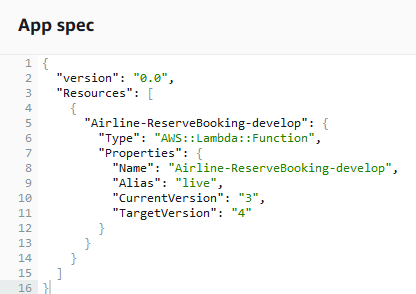 View Deployment status and see the traffic has now shifted to the new version. The Amplify Console build also continues.

View the Lambda function versions and aliases in the Lambda console, selecting Qualifiers.

A rollout deployment provides traffic shifting, A/B testing, and the ability to roll back to any version at any point in time. AWS SAM makes it simple to add safe deployments to serverless applications.

Introducing application lifecycle management improves the development, deployment, and management of serverless applications. In this post I cover a number of methods to prototype new features using temporary environments. I show how to use rollout deployments to gradually shift traffic to new application code.

This well-architected question continues in part 3 where I look at configuration management, CI/CD for serverless applications, and managing function runtime deprecation.