The sam init command creates the folder structure and basic resources for a new serverless application. Additionally, you can choose a starter template for the serverless applications from one of the AWS managed templates, or create your own. Some runtimes also offer multiple dependency manager options to choose from. In this case, you choose Maven for Java11. 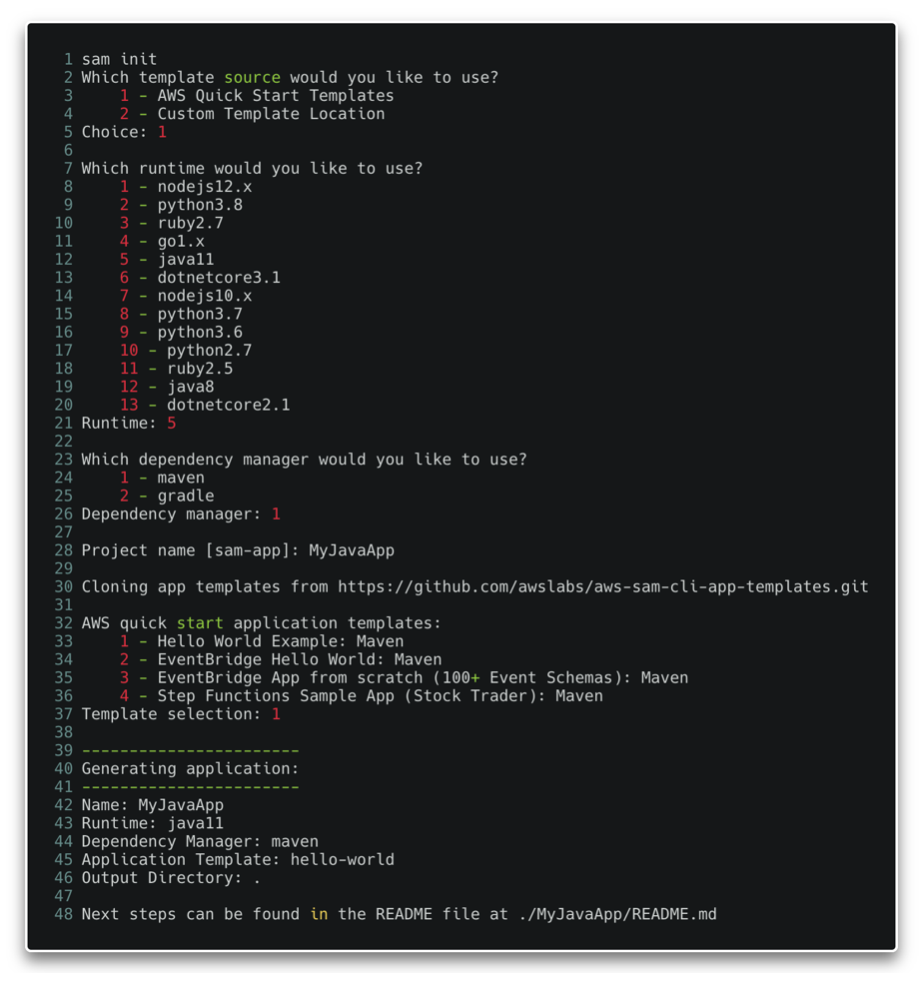 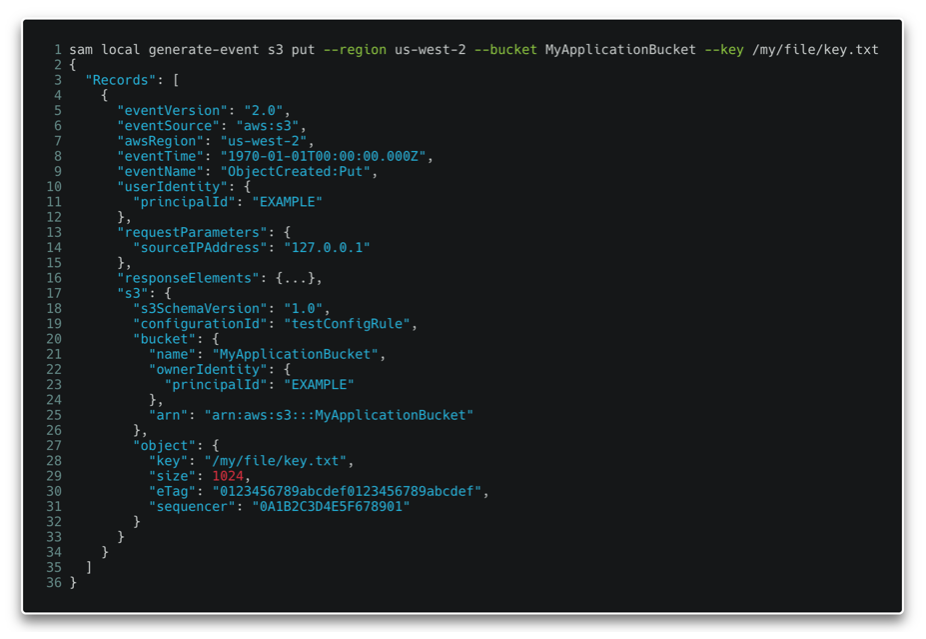 The sam build command provides contextual build capabilities based on the selected runtime. The build process prepares the code and dependencies into a deployable artifact and updates the AWS SAM template accordingly. While the build process has been around since the AWS SAM CLI was created, new features have been added for the general release. These features are covered in depth later in this post.

The sam deploy command packages and deploys a serverless application with the following steps:

The first time you run sam deploy, it is recommended you use the -g or –guided flag. This indicates to the AWS SAM CLI that the deployment configurations must be set or updated. 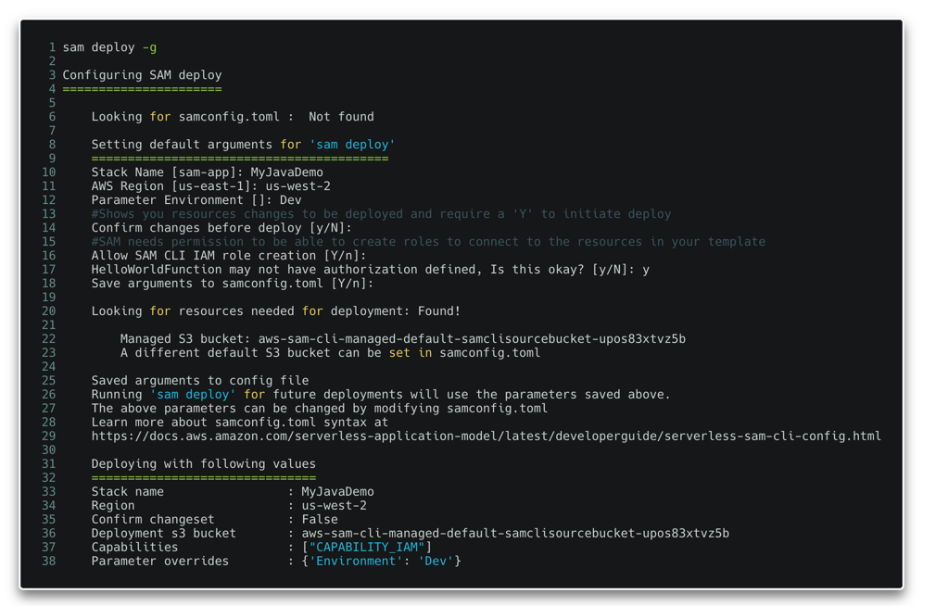 By using the guided deploy, you are prompted for the required application and configuration information. You also have the option to save the information to a configuration file for subsequent deployments.

The sam package command is generally only required in a continuous integration and continuous delivery (CI/CD) scenario, where the deployment is not handled by sam deploy.

The sam publish command enables you to publish applications to the AWS Serverless Application Repository. This command expects the AWS SAM template to include application metadata required for publishing. You can use the same build and package tools to prepare the artifacts.

The sam logs command enables you to explore Amazon CloudWatch Logs for a deployed Lambda function. You can identify the function by the stack name and logical identifier of the function, or directly by the physical name of the Lambda function. You can filter the results by start time, end time, and keywords. You can also add the -t or –tail flag to have AWS SAM fetch new logs as they become available.

The sam validate command validates a AWS SAM template file. This allows you to quickly identify template errors before sending to CloudFormation.

In preparation for the this release, the tooling team is making improvements to the build process for Lambda functions and Lambda Layers.

When creating Lambda functions in AWS SAM templates, you now have an optional MetaData parameter with a nested parameter called BuildMethod. The build method can be set to a supported runtime (node12.x, java11, etc.) and AWS SAM uses the default build process for the selected runtime. The BuildMethod can also be set to makefile, which allows a MakeFile to customize the build for supported runtimes or automate the build for custom runtimes. 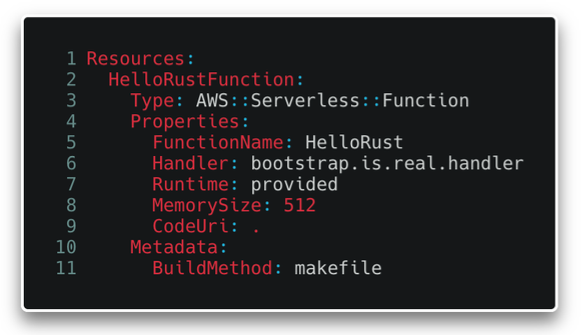 Lambda layers also benefit from the new build process as well. Previously, a Lambda Layer had to be fully built and packaged to deploy, and the files had to be structured according to runtimes.

With the new AWS SAM CLI build, a layer only needs to contain the manifest file. AWS SAM build fetches the dependencies and builds the layer for deployment. AWS SAM build for layers works with all runtimes supported by AWS SAM build.

With the general availability of the AWS SAM CLI, sam local commands now use an AWS managed Docker image. Previously, AWS SAM used the docker-lambda image created and maintained by AWS Serverless Hero, Michael Hart (@hichaelmart). The AWS Serverless team thanks Michael for his tireless work on this project and for his unfailing leadership and support in the serverless space. We also appreciate how Michael selflessly worked with us to make our new container images a reality.

What does GA mean?

The term generally available means that the software is no longer considered in beta and is released as stable, from version 1.0.0. It also means that the team is actively building new features and security updates on a regular cadence.

AWS SAM CLI is a powerful tool for accelerating serverless development and helping developers improve their time to market. Now that AWS SAM CLI is generally available, we continue to add features and make service improvements that are generally available as well. As always, your feedback is important to us. If you have ideas or comments, submit an issue at https://github.com/awslabs/aws-sam-cli.