Managing and operating relational databases is a basic piece of maintaining an effective business. Relational databases come in many flavors—commercial (Oracle, Microsoft SQL Server, IBM Db2, and so on) and open source (MySQL, PostgreSQL, and so on). With innovation and improvements in the open-source database world and cloud computing platforms like AWS, many enterprises are moving from proprietary (OLTP) database engines such as Oracle to open-source engines. Services like the AWS Database Migration Service (AWS DMS) and the AWS Schema Conversion Tool (AWS SCT) help with migrating commercial to open-source databases in AWS with minimal downtime.

We’re making an ongoing push to add more automation for both these steps, based on experience and customer feedback. As part of that, we’re excited to launch support in AWS SCT to convert objects from IBM Db2 for Linux, UNIX, and Windows (LUW) to any supported open-source databases in AWS. Those include Amazon RDS for PostgreSQL, RDS for MySQL and Amazon Aurora (MySQL and PostgreSQL compatible).

At the same time, we are also happy to announce general availability of IBM Db2 for LUW as a source for AWS DMS. This availability means we can use AWS DMS to migrate to any AWS DMS–supported targets from Db2 for LUW. These features are designed to help you migrate off of your Db2 for LUW databases and keep a leg in the cloud.

AWS SCT helps in converting database dictionaries and secondary objects to any supported database target with minimal work. AWS SCT creates a migration assessment report that points out objects and code that require manual change or rework. The assessment report also helps assess the amount of manual work required and gives you details on the assessment for all targets. AWS SCT is frequently updated with new features, and our release notes keep you informed about enhancements.

Now that IBM Db2 for LUW is a supported database source for AWS SCT, some features that we support for Db2 as a source are these:

Now that IBM Db2 for LUW is a supported database source in AWS DMS, some features that we support for Db2 as a source in the initial launch are these:

Let’s look at the process of migrating a Db2 database to an open-source database using AWS SCT and AWS DMS.

You can use AWS SCT to do migration from a Db2 for LUW source database to any of the targets listed preceding. Using AWS SCT, you can export the source database object definitions such as schema, views, stored procedures, and functions. You can download the latest version of AWS SCT from Installing, Verifying, and Updating the AWS Schema Conversion Tool in the AWS SCT documentation. 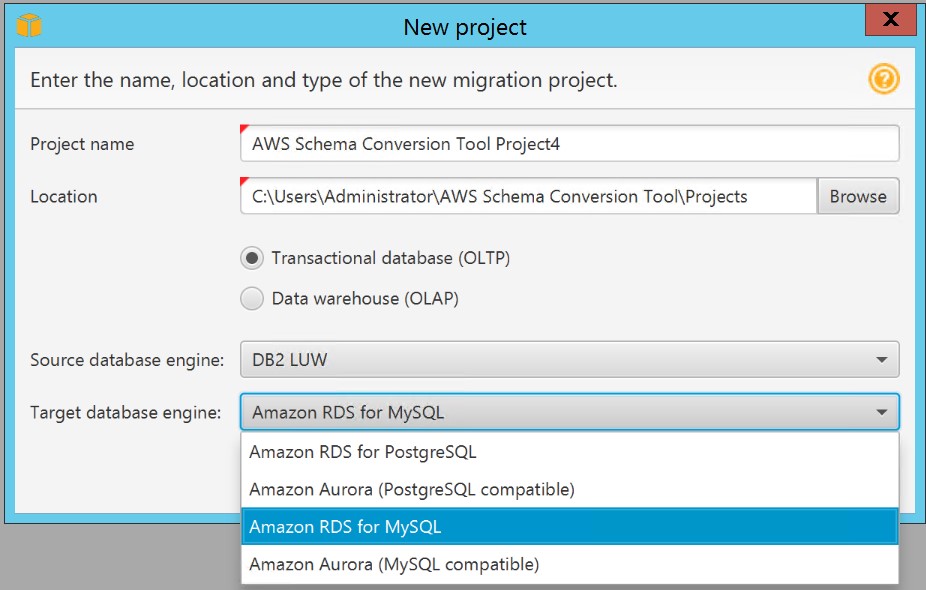 After doing this, specify the connection parameters to the source database. 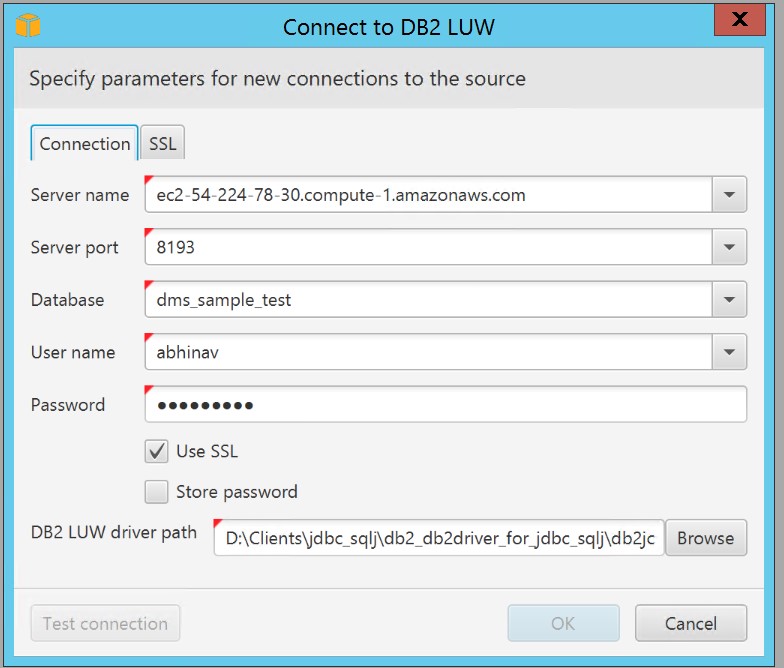 Keep these things in mind when creating a source endpoint for IBM Db2 in AWS SCT:

After that, you need to configure the endpoint for the target.

To export the database object definition from the source database, open the context (right-click) menu for the schema that you want to export and choose Convert Schema. 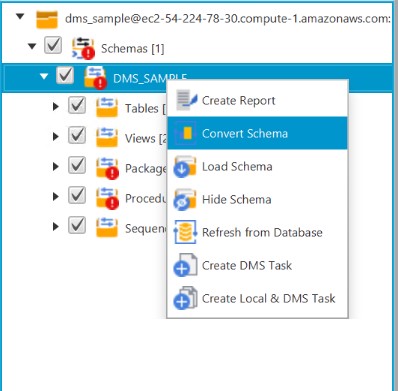 After the conversion is done, go to the target database section in AWS SCT and save the .sql file containing the database object definitions. 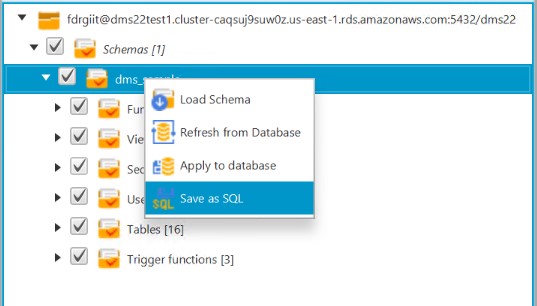 You might have to make a few edits in the AWS SCT .sql file. We recommend that the schema generated by AWS SCT for your target instance be the same as the code that you have on your Db2 source. Alternatively, you can also choose to have AWS SCT apply the converted schema directly on the target instance to prepare for the data migration stage.

Now that you have migrated all the database code and objects to the target database of choice, you can migrate your data using AWS DMS. AWS DMS can do a one-time data migration, or it can do a continuous replication of the data from IBM Db2 to any supported targets. These targets include relational databases (such as Oracle and Amazon Aurora), a data warehouse (Amazon Redshift), a NoSQL database (Amazon DynamoDB), or an Amazon S3 bucket. With this release, we also support SSL connectivity (verify-ca) for IBM Db2 databases.

How to add an IBM Db2 database as a source

Follow these steps to add a Db2 database source to AWS DMS:

You can also create the endpoint for Db2 using the following AWS CLI command:

We believe that these new features should help anyone who wants to migrate off of Db2 for LUW to AWS. This migration can help you to get to know the power of cloud computing and AWS. It also can help you save on operating costs by moving from a heavily charged licensed database into an open-source engine in AWS. When your data is in AWS, you can use a plethora of services to achieve the mission and vision of your organization through your data.

Feel free to drop us questions in the comments section. Happy migrating!

Abhinav Singh is a database engineer in Database Migration Service at Amazon Web Services. He works with our customers to provide guidance and technical assistance on database migration projects, helping them improve the value of their solutions when using AWS.