Prahlad Rao is a solutions architect at Amazon Web Services.

Although moving from on-premises to the cloud using the same database engine is a common pattern, increasingly customers also use different engines between source and target when replicating. This pattern especially occurs where the source is a commercial database engine and the target is open source. Such an approach can save on licensing costs. In other use cases, the target database might be used as read-only for a reporting application that is compatible with a certain database engine, or the application team is comfortable using an open source database for their needs. Or the customer might be migrating from a commercial database to an open source database on the AWS Cloud for cost and flexibility purposes. This blog post will walk you through the process of replicating a Microsoft SQL Server database to PostgreSQL using AWS Schema Conversion Tool (AWS SCT) and AWS DMS.

AWS DMS helps you migrate databases to AWS with relative ease and security. The source database remains fully operational during the migration, minimizing downtime to applications that rely on the database. The service supports homogenous migrations (like to like databases) and also heterogeneous migrations (between database platforms such as Oracle to Amazon Aurora or SQL Server to MySQL). AWS DMS can also be used for continuous data replication with high availability.

AWS Schema Conversion Tool is a stand-alone application that provides a project-based user interface and is available for Microsoft Windows, Mac OS X, and Linux versions. You can find detailed installation instructions in the AWS documentation, so I won’t go into all the details, but high-level steps are outlined following: 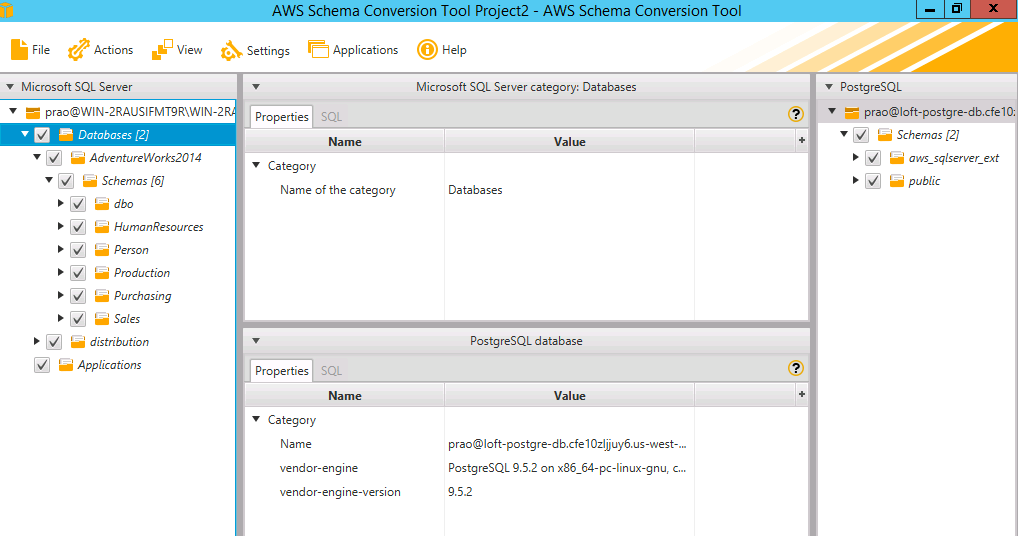 Select the source database on the left and refresh the database by right-clicking on the database to ensure we are connected to the latest schema set. In our case, it’s AdventureWorks2014. You also notice schema listed in the database. With SCT, you can replicate specific schema or an entire database, giving you the flexibility to migrate or replicate part of the dataset from source to target. This flexibility is useful if you want to fan out into multiple target databases from one source database. We will replicate the HumanResources schema and the dataset associated with that schema here.

The schema will now be converted. Notice the new schema on the target PostgreSQL database on the right, following.

The database migration assessment report provides important information about schema conversion. It summarizes all conversion tasks and details the action items for the schema that can’t be converted to the target DB engine. The report can also help you analyze requirements for migrating to the cloud and for changing license type. You can find more details on creating this assessment report in the AWS documentation, and also in this nice blog post. 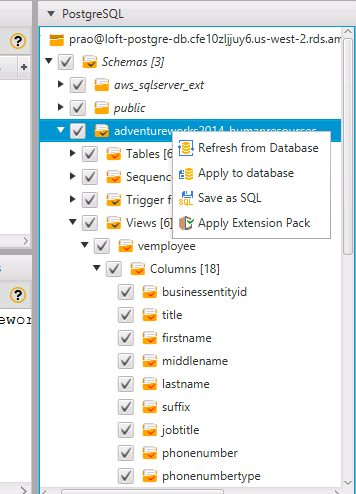 Let’s confirm that the schema has been applied on the target by logging into the target RDS PostgreSQL database. I’m using a psql client on my Mac to access the target database:

Notice the adventureworks2014_humanresources schema, created by SCT. Let’s also verify the tables as part of the schema and look at the structure of a table:

Now that we’ve migrated schema from source to target, it’s time to use DMS to actually replicate data from the source to the target database. 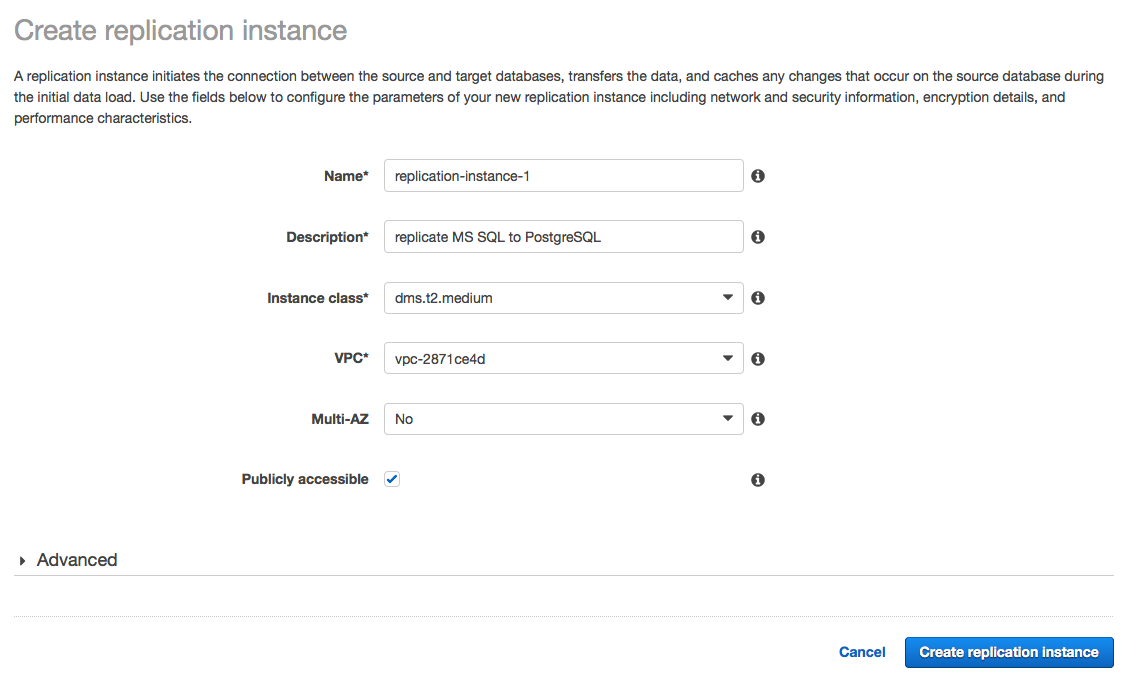 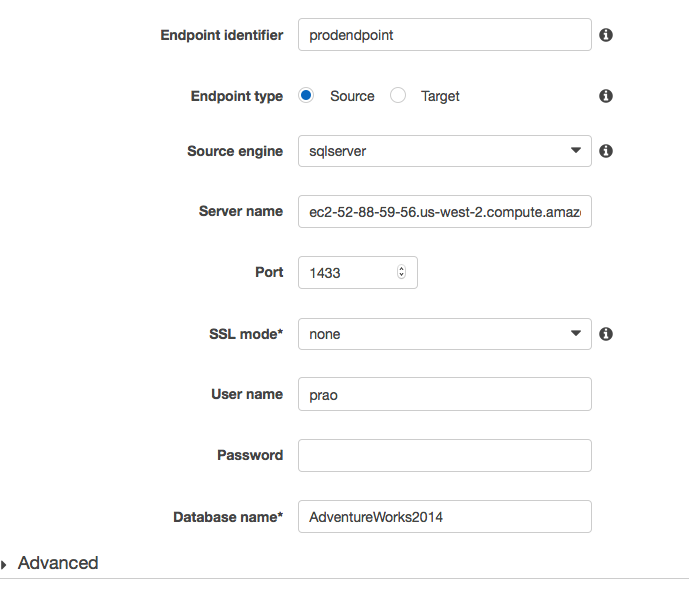 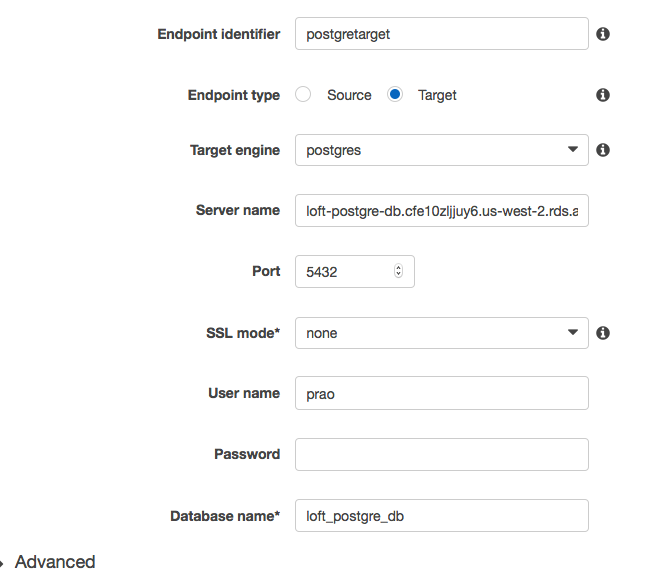 Because we’ve already migrated schema to the target database, we need to make sure to specify the same schema that was created on the PostgreSQL database. Before we run the create-replication-task AWS CLI command, we need to specify important task settings and table mappings files using JSON as shown following. The task_settings.json file specifies target schema to be used when replicating data and other parameters to determine how large objects are managed. Because we’re replicating data here and not migrating, we need to ensure ApplyChangesEnabled is set to true, which ensures the task will keep target tables up-to-date by applying changes using change data capture (CDC). The other parameter will be DO_NOTHING on the table prep mode, which means data and metadata of the existing target table are not affected. The task_settings.json file for our replication task follows:

You can find additional details on the task_settings.json file in the AWS documentation.

The table_mappings.json file specifies tables from a particular source schema that you want to replicate to the target endpoint. Table mappings offer a lot of flexibility to migrate specific tables and datasets to a target. Migration can also be rule-based on datasets that you want to filter when replicating data. These approaches provide powerful capabilities to granularly replicate datasets across database engines. For additional details, see the AWS documentation.

In our case, because we’re only replicating HumanResources data, we will specify that in our table_mappings.json file. The table-name value % tells DMS to replicate all tables for that particular schema.

Now that we have the required settings to begin replication, we’ll use create-replication-task to replicate data. Because we’re replicating data as changes happen to source database, full-load-and-cdc should be selected as migration type in our command. Doing this will ensure both initial load and ongoing changes are replicated.

The replication task is ready; let’s start it.

Once the task is run, the initial load will be completed, followed by any changes as they happen on the source database. On the task tab, choose Table statistics to verify tables and rows that were replicated to the target database with additional details, in our case HumanResources data. 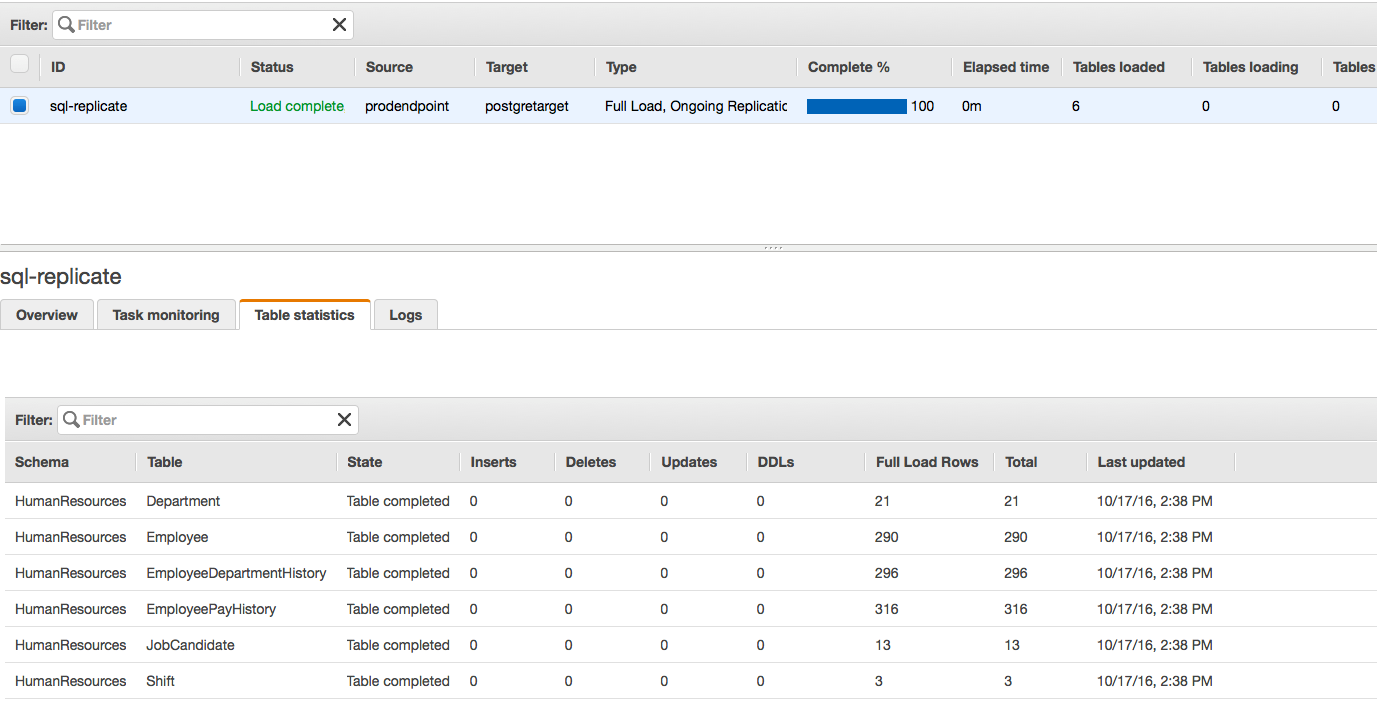 Now that the source and target databases are being replicated, we’ll go ahead and insert a record into our source SQL Server database. Let’s insert Operations as Department and Group Name. Then we’ll verify changes are propagated to the target PostgreSQL database:

On the DMS console under Tasks, Table Statistics, we immediately notice an entry in the Inserts column into the Department table as follows: 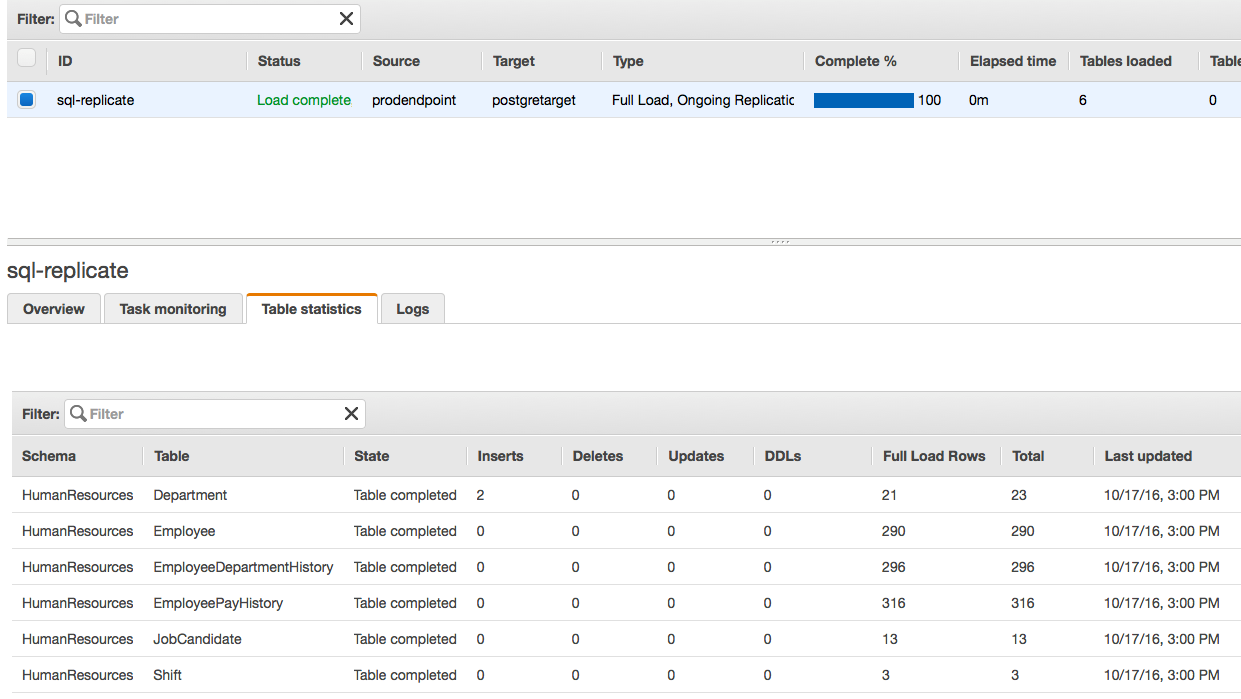 Let’s confirm the DDL update that we just made on the DMS console. Notice the DDL column has incremented to 1: 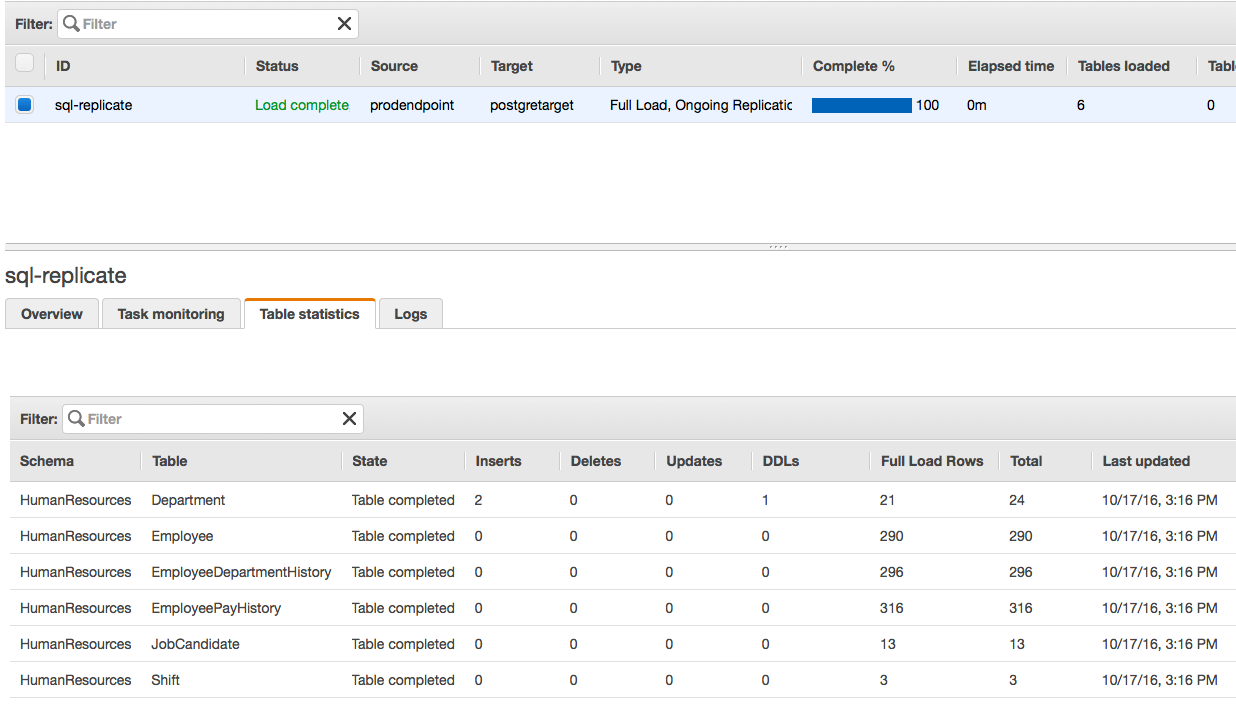 The target database has a new column, GroupNumber, added to the Department table.

Summary
By using the AWS Schema Conversion Tool (AWS SCT) and AWS Database Migration Service (AWS DMS), you can not only migrate databases across heterogeneous engines more easily but also perform continuous data replication. You can work with different database engines across source and target databases, giving you flexibility and lowering your cost to run your favorite database engines on the AWS Cloud, without complex migration tools or manual schema conversion methods.