Public blockchains are used for a variety of use cases, like decentralized finance (DeFi) apps, non-fungible token (NFT) apps, or cross-border payments. Blockchains differ in their protocol and consensus design, implementation language, and smart contract capabilities.

Determining how external participants can be incentivized to join a network running their own node is key in economic design principals rooted in game theory, where you’re designing the network to be more decentralized while improving robustness.

In Part 2, we provide a step-by-step walkthrough of how to sign an Ethereum transaction using the proposed Nitro Enclaves-based architecture.

In Part 3, we conduct a technical deep dive into Nitro Enclaves and explain features like cryptographic attestation. We also explain the general architecture of a Nitro Enclaves-based Ethereum signing application.

Challenges with an AWS KMS-based approach

AWS KMS-based solutions, for example as described in the post How to sign Ethereum EIP-1559 transactions using AWS KMS, are a great fit for blockchains like Ethereum that use the secp256k1 elliptic curve. On the other hand, there are limitations when it comes to low-level tasks and how to manage access to private keys:

To address these challenges, we introduce Nitro Enclaves as a secure compute environment for low-level blockchain tasks and scale out blockchain account management without using AWS KMS as the central key management system.

The following diagram illustrates the architecture for our Nitro Enclaves-based blockchain application. 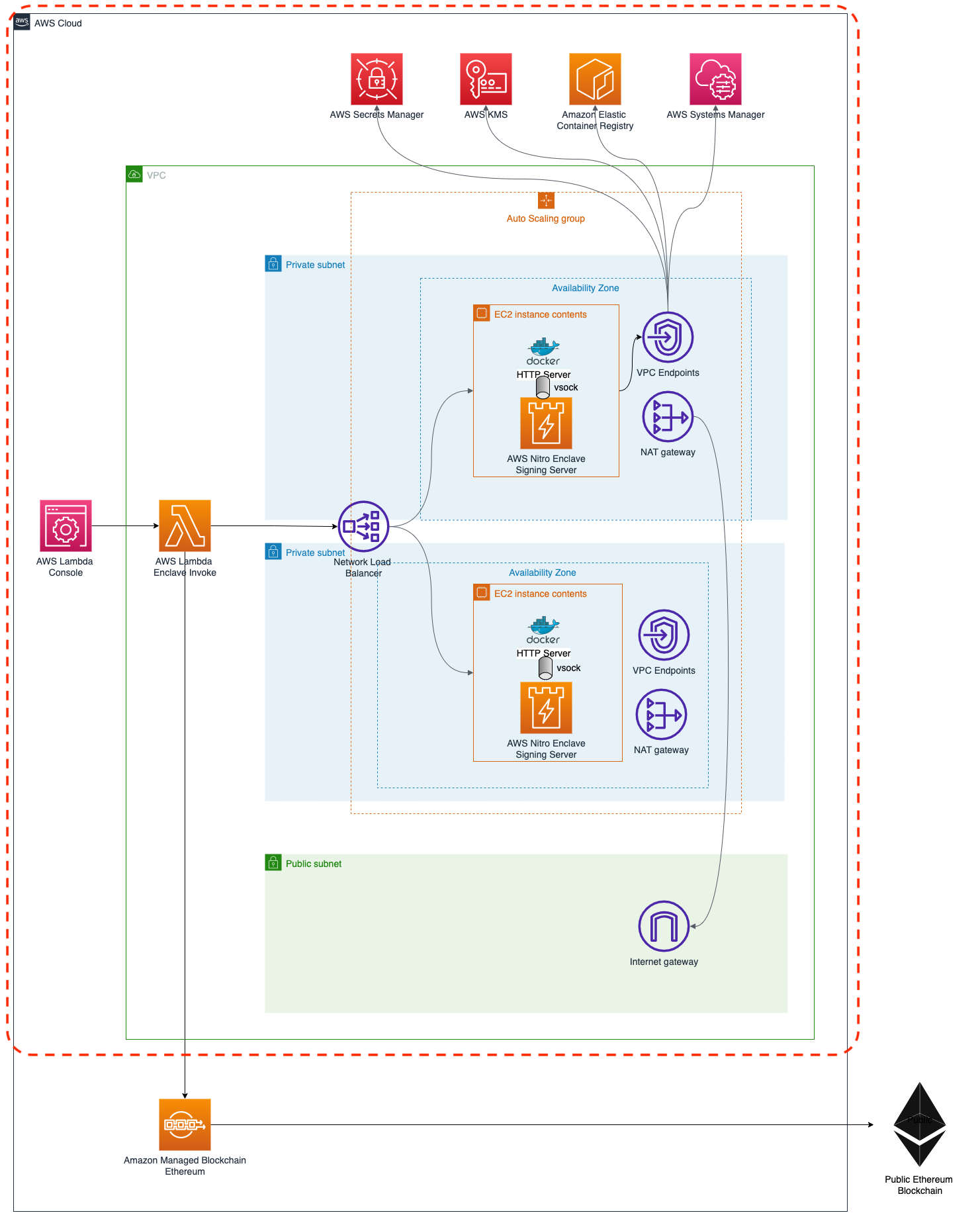 This architecture showcases the cryptographic attestation feature of Nitro Enclaves together with AWS KMS.

Nitro Enclaves provides an isolated compute environment to protect and securely process highly sensitive data such as private keys for blockchain operations. Communication between the EC2 parent instance and the enclave is limited to a secure local vsocks channel.

Communication with AWS services like AWS KMS or AWS Secrets Manager is kept private via interface VPC endpoints that have been placed inside the subnets in each Availability Zone.

The AWS Lambda function shown in this architecture is not required for a production-ready setup.

The following diagram depicts the components deployed inside the EC2 instances and the general communication flow with external AWS services like Secrets Manager or AWS KMS. 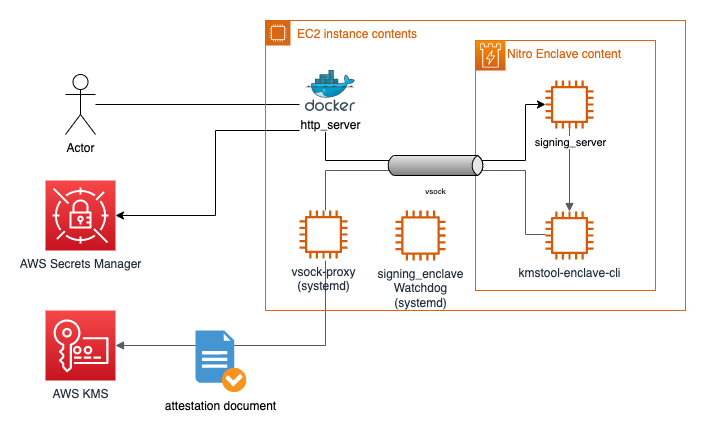 The following steps explain on a high level how an Ethereum transaction is signed inside Nitro Enclaves. One prerequisite is that the Ethereum private key has already been encrypted and stored inside the Secrets Manager slot that was created along with AWS CDK. For additional information about the Ethereum key related configuration, refer to Part 2.

The signing flow is as follows:

For technical details, such as the secure vsocket-based communication or the cryptographic attestation feature, refer to Part 3.

In this post, we provided a high-level introduction to Nitro Enclaves and explained why AWS Nitro is well suited to run critical blockchain workloads. We also explained what aspects are important when it comes to designing and architecting a secure and reliable blockchain transaction processing environment.

In Part 2 of this post, we conduct a walkthrough of the configuration aspects like KMS key policies and how to sign your first Ethereum EIP-1559 transaction inside Nitro Enclaves.