There are multiple ways to deploy API endpoints, such as this example, in which you could use an application running on Amazon EC2 to demonstrate how to integrate Amazon ElastiCache with Amazon DocumentDB (with MongoDB capability). While the approach in this example helps achieve great performance, and reliability through the elasticity and the ability to scale up or down the number of EC2 instances in order to accommodate the load on the application, there is still however some operational overhead you still have to manage the EC2 instances yourself. One way of addressing the operational overhead issue and related costs could be to transform the application into a serverless architecture.

The example in this blog post uses an application that provides a similar use case, using a serverless architecture showcasing some of the tools that are being leveraged by customers transitioning from lift-and-shift to building cloud-native applications. It uses Amazon API Gateway to provide the REST API endpoint connected to an AWS Lambda function to provide the business logic to read and write from an Amazon Aurora Serverless database. It also showcases the deployment of most of the infrastructure with the AWS Cloud Development Kit, known as the CDK. By moving your applications to cloud native architecture like the example showcased in this blog post, you will be able to realize a number of benefits including:

At the end of this blog, you have an AWS Cloud9 instance environment containing a CDK project which deploys an API Gateway and Lambda function. This Lambda function leverages a secret stored in your AWS Secrets Manager to read and write from your Aurora Serverless database through the data API, as shown in the following diagram. 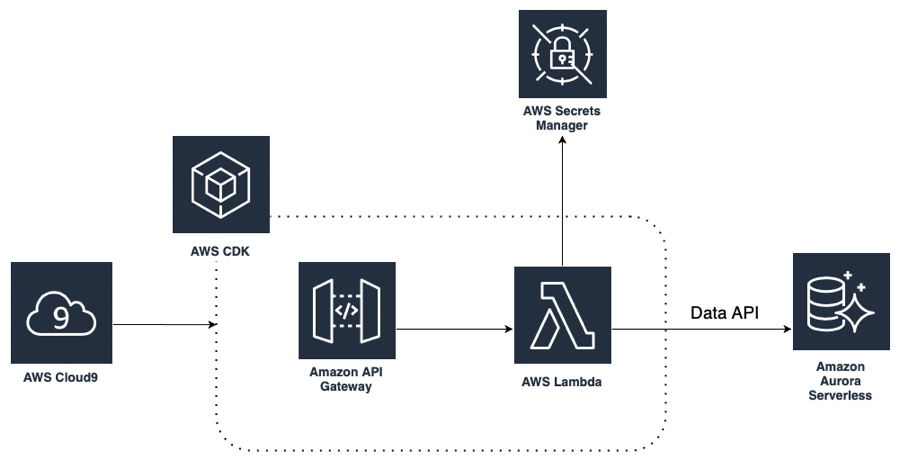 Through the blog post you will be creating the following resources:

In order to deploy the CDK application, there are a few prerequisites that need to be met:

To begin, navigate to the AWS console to create a new Amazon RDS database.

After creating the database instance, the next step is to store your secrets for your database in AWS Secrets Manager. 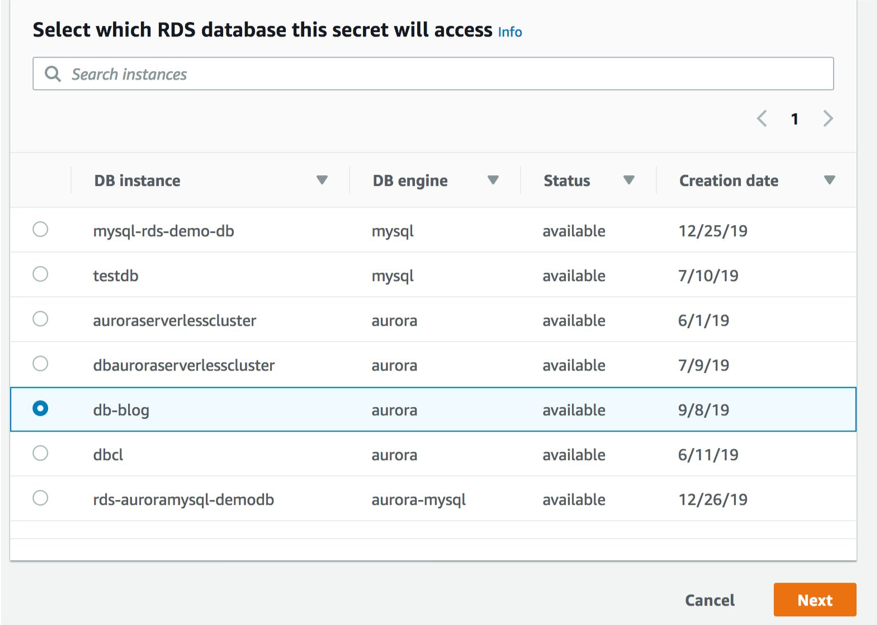 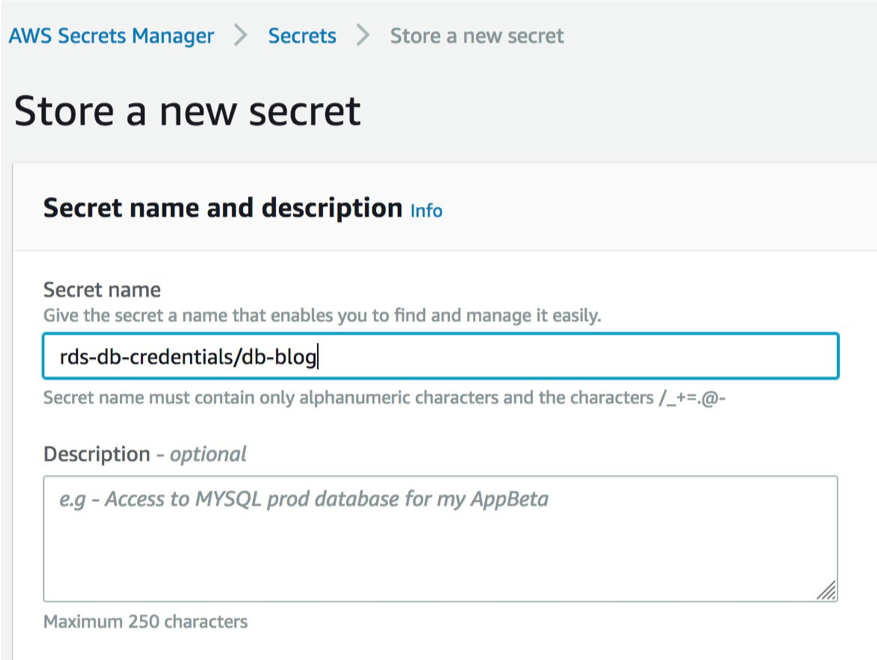 After creating the DB cluster, create the database instance; create your tables and populate them; and finally, test a connection to ensure that you can query your database. 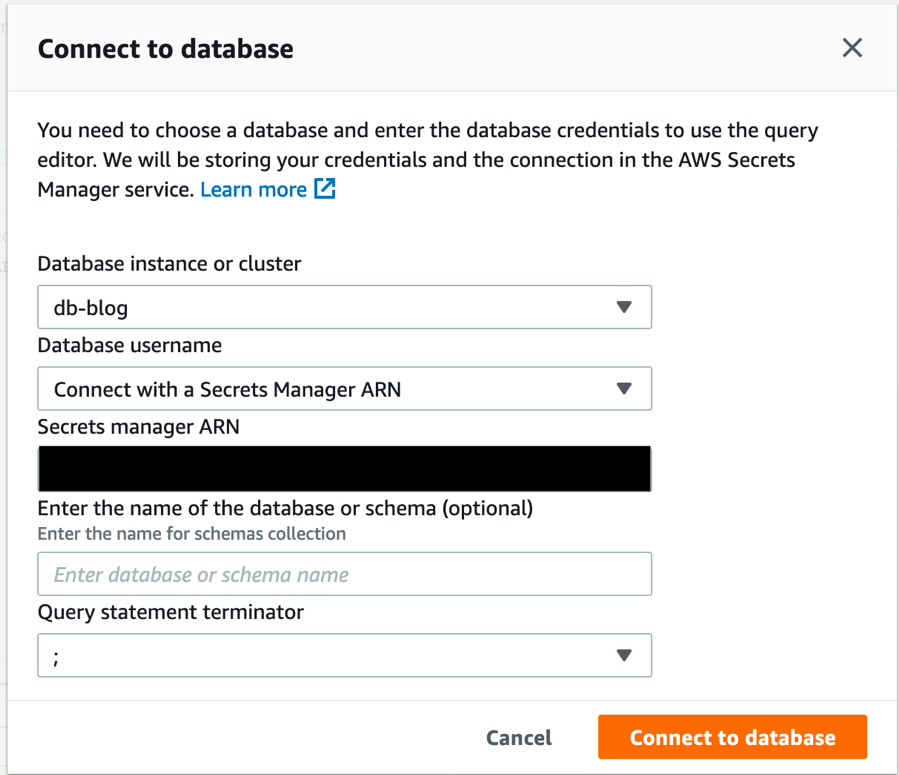 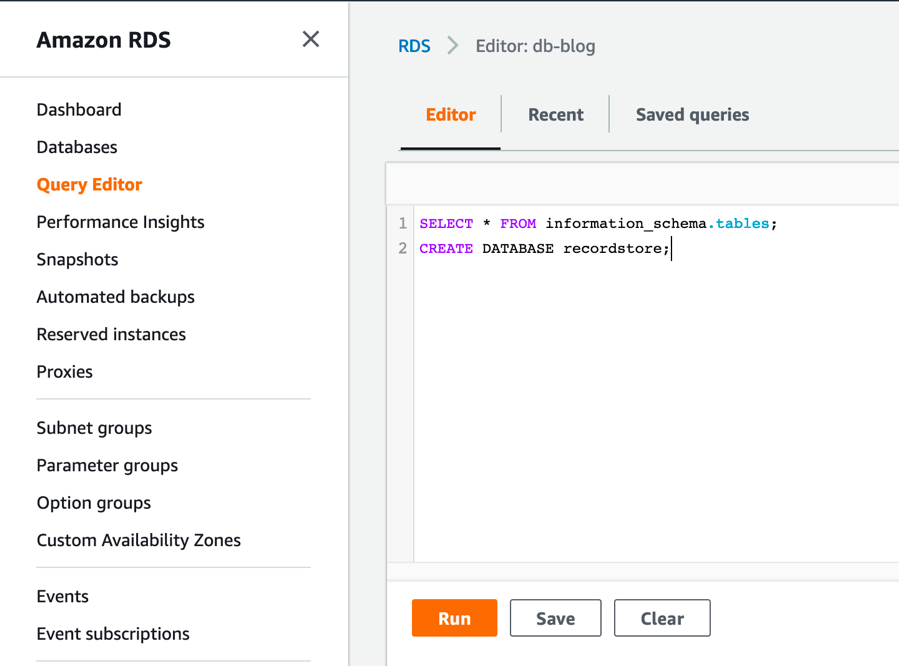 If you have the AWS CLI set up on your computer, you can connect to your database and retrieve records.

To test it, use the rds-data execute-statement API within the AWS CLI to connect to your database via the data API web service and query the singers table, as shown below:

You should see the following result:

To create a Cloud9 instance:

Once your instance is launched, you see the screen shown in the following screenshot: 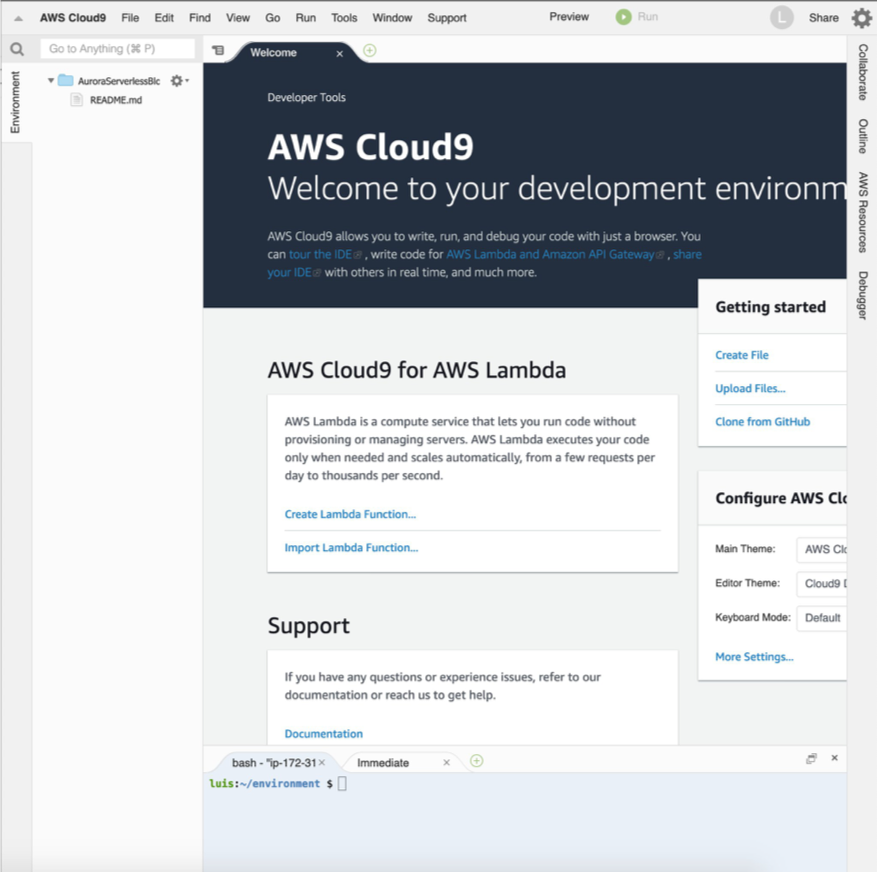 For the next section of this example, you mostly work on the command line of your Cloud9 terminal and on your file explorer.

The AWS Cloud Development Kit (AWS CDK) is an open-source software development framework to model and provision your cloud application resources using familiar programming languages. If you would like to familiarize yourself the CDKWorkshop is a great place to start.

First, create a working directory called RecordsApp and initialize a CDK project from a template.

Now your instance should look like the example shown in the following screenshot:

You are mainly working in two directories:

Your initial set up is ready, and you can move into creating specific services and deploying them to your account.

Replace the dbSecretARN with the ARN of your Secrets Manager secret ARN from the previous steps.

This snippet of code will instruct the AWS CDK to create the following resources:

Take a look at what this Lambda function is doing. You have two functions inside of your Lambda function. The first is the exported handler, which is defined as an asynchronous function. The second is a unique identifier function to generate four-digit random numbers you use as UIDs for your database records. In your handler function, you handle the following actions based on the event you get from API Gateway:

Now you have all the pieces you need to deploy your endpoint and Lambda function by running the following commands:

If you change the Lambda code or add aditional AWS resources to your CDK deployment, you can redeploy the application by running all four commands in a single line:

Once it’s done, you can test it using Postman:

GET = ‘RecordName’ in the path

To clean up the resources created by the CDK, run the following command in your Cloud9 instance:

To clean up the resources created manually, run the following commands:

This blog post demonstrated how to transform an application running on Amazon EC2 from a previous blog into serverless architecture by leveraging services such as Amazon API Gateway, Lambda, Cloud 9, AWS CDK, and Aurora Serverless. The benefit of serverless architecture is that it takes away the overhead of having to manage a server and helps reduce costs, as you only pay for the time in which your code executes.

This example used a record-store application written in Node.js that allows users to find their favorite singer’s record titles, as well as the dates when they were released. This example could be expanded, for instance, by adding a payment gateway and a shopping cart to allow users to shop and pay for their favorite records. You could then incorporate some machine learning into the application to predict user choice based on previous visits, purchases, or information provided through registration profiles.

Luis Lopez Soria is an AI/ML specialist solutions architect working with the AWS machine learning team. He works with AWS customers to help them with the adoption of Machine Learning on a large scale. He enjoys doing sports in addition to traveling around the world, exploring new foods and cultures.