When I talk with customers and partners, I find that they are in different stages in the adoption of DevOps methodologies. They are automating the creation of application artifacts and the deployment of their applications to different infrastructure environments. In many cases, they are creating and supporting multiple applications using a variety of coding languages and artifacts.

The management of these processes and artifacts can be challenging, but using the right tools and methodologies can simplify the process.

In this post, I will show you how you can automate the creation and storage of application artifacts through the implementation of a pipeline and custom deploy action in AWS CodePipeline. The example includes a Node.js code base stored in an AWS CodeCommit repository. A Node Package Manager (npm) artifact is built from the code base, and the build artifact is published to a JFrog Artifactory npm repository.

I frequently recommend AWS CodePipeline, the AWS continuous integration and continuous delivery tool. You can use it to quickly innovate through integration and deployment of new features and bug fixes by building a workflow that automates the build, test, and deployment of new versions of your application. And, because AWS CodePipeline is extensible, it allows you to create a custom action that performs customized, automated actions on your behalf.

JFrog’s Artifactory is a universal binary repository manager where you can manage multiple applications, their dependencies, and versions in one place. Artifactory also enables you to standardize the way you manage your package types across all applications developed in your company, no matter the code base or artifact type.

If you already have a Node.js CodeCommit repository, a JFrog Artifactory host, and would like to automate the creation of the pipeline, including the custom action and CodeBuild project, you can use this AWS CloudFormation template to create your AWS CloudFormation stack.

The project code can be found in this GitHub repository: https://github.com/aws-samples/aws-codepipeline-custom-job-worker-for-jfrog-artifactory. 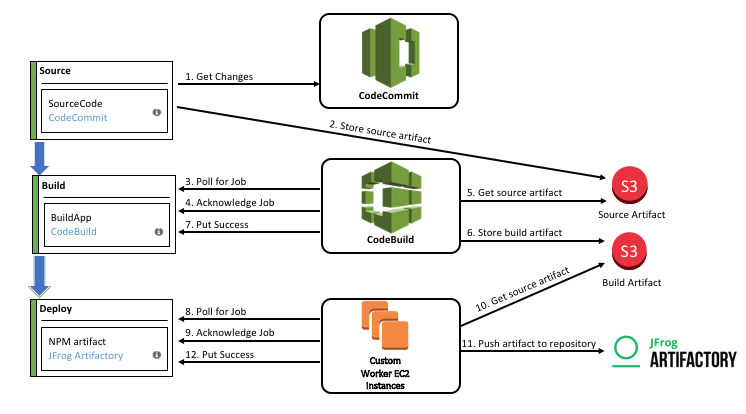 This figure shows the path defined in the pipeline for this project. It starts with a change to Node.js source code committed to a private code repository in AWS CodeCommit. With this change, CodePipeline triggers AWS CodeBuild to create the npm package from the node.js source code. After the build, CodePipeline triggers the custom action job worker to commit the build artifact to the designated artifact repository in Artifactory.

·      Created a CodeCommit repository that contains a Node.js project.

If you do not have a Node.js repository, you can create a CodeCommit repository that contains this simple ‘Hello World’ project. This project also includes a buildspec.yml file that is used when you define your CodeBuild project. It defines the steps to be taken by CodeBuild to create the npm artifact.

If you do not already have a pipeline set up in CodePipeline, you can use this template to create a pipeline with a CodeCommit source action and a CodeBuild build action through the AWS Command Line Interface (AWS CLI). If you do not want to install the AWS CLI on your local machine, you can use AWS Cloud9, our managed integrated development environment (IDE), to interact with AWS APIs.

In your development environment, open your favorite editor and fill out the template with values appropriate to your project. For information, see the readme in the GitHub repository.

Use this CLI command to create the pipeline from the template:

It creates a pipeline that has a CodeCommit source action and a CodeBuild build action.

I can use the steps in the Set Me Up -> npm section on the landing page to configure my worker to interact with the default NPM repository. 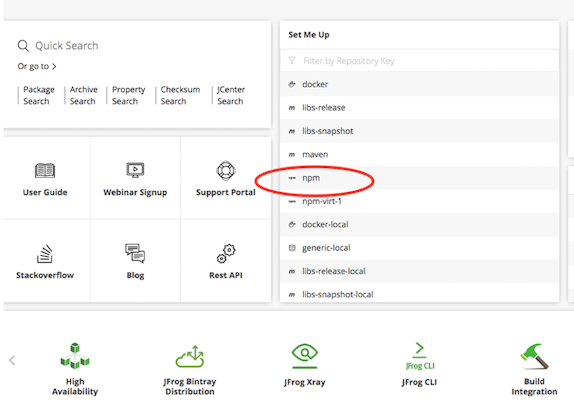 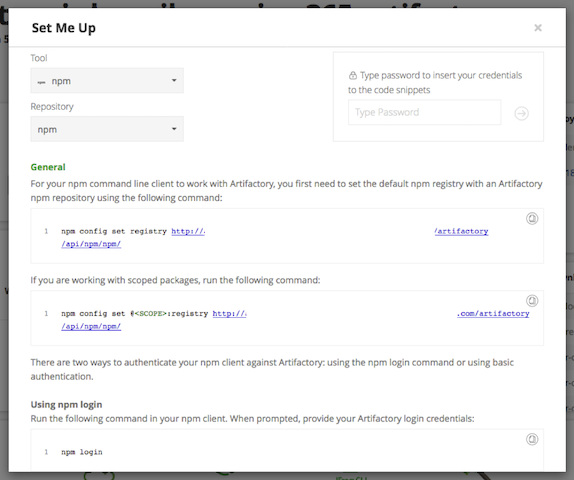 Describes the required values to run the custom action. I will define my custom action in the ‘Deploy’ category, identify the provider as ‘Artifactory’, of version ‘1’, and specify a variety of configurationProperties whose values will be defined when this stage is added to my pipeline.

Polls CodePipeline for a job, scanning for its action-definition properties. In this blog post, after a job has been found, the job worker does the work required to publish the npm artifact to the Artifactory repository.

My custom action definition in JSON:

There are seven sections to the custom action definition: 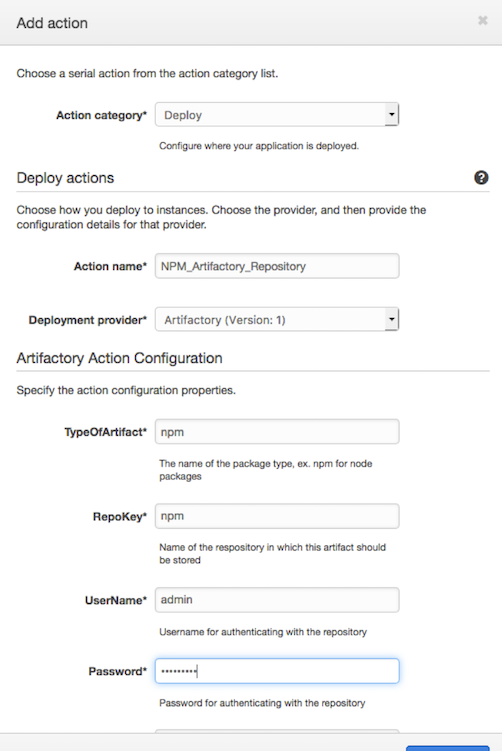 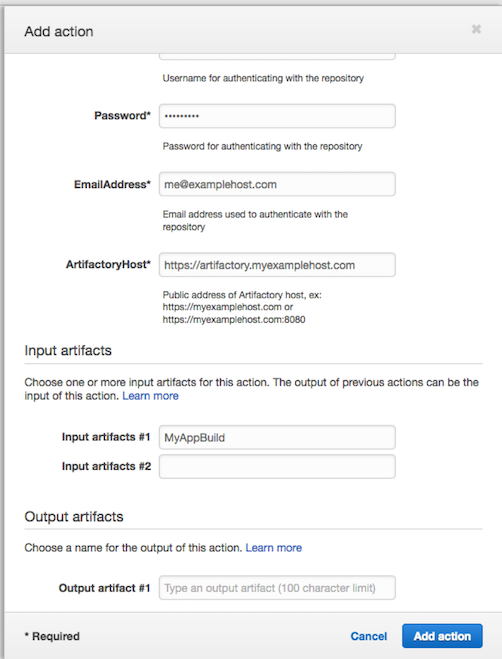 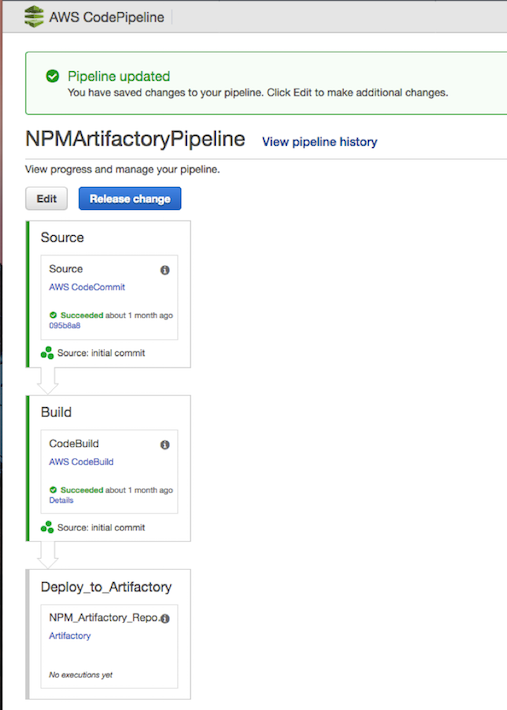 The EC2 instance is running Amazon Linux and has an IAM instance role attached that gives the worker permission to access CodePipeline. The worker process is as follows:

Because I am running my custom worker on an Amazon Linux EC2 instance, I installed npm with the following command:

For my custom worker, I used pip to install the required Python libraries:

For a full Python package list, see requirements.txt in the GitHub repository.

Let’s take a look at some of the code snippets from the worker.

First, the worker polls for jobs:

When there is a job in the queue, the poller returns a number of values from the queue such as jobId, the input and output S3 buckets for artifacts, temporary credentials to access the S3 buckets, and other configuration details from the stage in the pipeline.

Here is an example of the return response:

After successfully receiving the job details, the worker sends an acknowledgement to CodePipeline to ensure that the work on the job is not duplicated by other workers watching for the same job:

With the job now acknowledged, the worker publishes the source code artifact into the desired repository. The worker gets the value of the artifact S3 bucket and objectKey from the inputArtifacts in the response from the poll_for_jobs API request. Next, the worker creates a new directory in /tmp and downloads the S3 object into this directory:

Because the downloaded artifact from S3 is a zip file, the worker must unzip it first. To have a clean area in which to work, I extract the downloaded zip archive into a new directory:

The worker now has the npm package that I want to store in my Artifactory NPM repository.

For the custom worker code, see npm_job_worker.py in the GitHub repository.

I run my custom worker on an EC2 instance using the command python npm_job_worker.py, with an optional --version flag that can be used to specify worker versions other than 1. Then I trigger a release change in my pipeline:

From my custom worker output logs, I have just committed a package named node_example at version 1.0.3:

After that has been built successfully, I can find my artifact in my Artifactory repository:

To help you automate this process, I have created this AWS CloudFormation template that automates the creation of the CodeBuild project, the custom action, and the CodePipeline pipeline. It also launches the Amazon EC2-based custom job worker in an AWS Auto Scaling group. This template requires you to have a VPC and CodeCommit repository for your Node.js project. If you do not currently have a VPC in which you want to run your custom worker EC2 instances, you can use this AWS QuickStart to create one. If you do not have an existing Node.js project, I’ve provided a sample project in the GitHub repository.

If you have any questions or feedback, feel free to reach out to us through the AWS CodePipeline forum.

Erin McGill is a Solutions Architect in the AWS Partner Program with a focus on DevOps and automation tooling.