At GameAnalytics we run all our systems on AWS, and have done so from the very beginning. This has allowed us to concentrate on building services and implementing features that our customers want, rather than maintaining servers and scaling out data centres – crucial for a growing company with a relatively small engineering team.

We receive, store and process game events from 1.2 billion monthly players in nearly 90,000 games. These events all pass through a system we call the data collection API, which forwards the events to other internal systems so that we eventually end up with statistics and graphs on a dashboard, displaying user activity, game revenue, and more.

The data collection API is fairly simple in principle: games send events to us as JSON objects through HTTP POST requests, and we send a short response and take the event from there. Clients either use one of our SDKs or invoke our REST API directly. 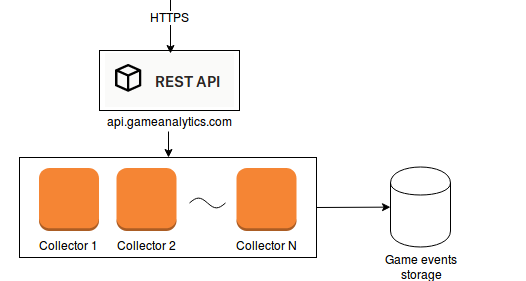 We get approximately five billion requests per day, each typically containing two or three events for a total of a few kilobytes. The response is a simple HTTP 200 “OK” response with a small bit of JSON confirming that the events were received. The general traffic pattern is a high number of relatively short-lived connections: clients send just over two HTTP requests per connection on average.

So what would you guess is the greatest cost associated with running this system on AWS, with a fleet of Amazon Elastic Compute Cloud (EC2) instances behind a load balancer? We wouldn’t have guessed that the greatest part of the cost for us is data transfer out. So we set out to do something about this and see if we could save some money here.

Before these changes, a response from this system would look like this, for a total of 333 bytes:

(Remember that the line breaks are CRLF, and thus count as two bytes each.)

Since we would send this five billion times per day, every byte we could shave off would save five gigabytes of outgoing data, for a saving of 25 cents per day per byte removed.

Much of this could simply be removed:

So for the vast majority of requests, the response would look like this:

So it stands to reason that by reducing data sent to a third, costs for data transfer should drop by 66%, right? Well, costs dropped, but only by 12%. That was a bit underwhelming.

Obviously, before we can send those 109 bytes of HTTP response, we need to establish a TLS session, by exchanging a number of messages collectively known as a “TLS handshake”. We made a request to our service while capturing network traffic with Wireshark, and discovered that it sends out 5433 bytes during this process, the largest part of which is made up of the certificate chain, taking up 4920 bytes.

So reducing the HTTP response, while important, doesn’t have as much impact as reducing TLS handshake transfer size. But how would we do that?

One thing that reduces handshake transfer size is TLS session resumption. Basically, when a client connects to the service for the second time, it can ask the server to resume the previous TLS session instead of starting a new one, meaning that it doesn’t have to send the certificate again. By looking at access logs, we found that 11% of requests were using a reused TLS session. However, we have a very diverse set of clients that we don’t have much control over, and we also couldn’t find any settings for the AWS Application Load Balancer for session cache size or similar, so there isn’t really anything we can do to affect this.

Does a certificate chain really need to take up 4920 bytes?

We initially used a certificate from AWS Certificate Manager. It’s very convenient: there is no need to copy files anywhere, the certificate renews itself automatically, and it’s free. The downside is that multiple intermediate certificates are required to establish a trust chain to a root certificate:

That sums up to 4908 bytes, but each certificate has a 3-byte length field, so the TLS handshake certificate message contains 4920 bytes of certificate data.

So in order to reduce the amount of data we’d need to send in each handshake, we bought a certificate from Digicert instead. The chain is much shorter:

So given that the clients establish approximately two billion connections per day, we’d expect to save four terabytes of outgoing data every day. The actual savings were closer to three terabytes, but this still reduced data transfer costs for a typical day by almost $200.

We’re probably in diminishing returns territory already, but there are some things we haven’t mentioned above:

Also, the certificate contains lengthy URLs for CRL download locations and OCSP responders, 164 bytes in total. While these are required security features, it could be a selling point for a Certificate Authority to use URLs that are as short as possible. Starfield Technologies is setting a good example here: it uses the host names x.ss2.us and o.ss2.us for these purposes.

Here are some upcoming TLS extensions that would also reduce the size of handshakes:

So that’s what we’ve learned so far. Remember to check your certificates as they might be bigger than required, increase the idle connection timeout as it’s cheaper to keep an established connection open, and trim your HTTP response headers.