Most people may remember watching reality television such as  Survivor or Big Brother. Today, Genvid has brought a modern twist to this flavor of entertainment through usage of their unique, interactive broadcasting services.

Rival Peak has viewers cheer on their favorite of 12 different AI-controlled contestants and help them complete tasks around a mysterious part of the Pacific Northwest before one of them is eliminated on a weekly recap show hosted by Wil Wheaton. Streaming 12 different contestant specific streams as well as a universal stream through a central AI authority requires a powerful backend infrastructure. By utilizing EC2’s G4 instances, and services such as Elemental Media Live and Amazon S3, Genvid has accomplished a smooth launch for their unique interactive show, all while maintaining a cost-conscious, high-performance solution.

Genvid utilizes a variety of different services across their workload ranging from EC2 G4 instances for simulation rendering and video encoding, and EKS clusters running a Hashicorp stack for monitoring/authentication of their management portal. Viewers connect to edge nodes within the environment through a WebSocket session on the Facebook frontend, and receive Facebook video to watch the streams.

Through that session, metadata is fed back to the viewers regarding the episode state (what contestants are available, what events have occurred, etc.). Once connected, viewers can interact with the contestants by participating in events generated by the central authority sent out to the rendering servers through Photon Bolt. For example, a contestant may be gathering firewood for the camp, in which case the central authority sends out an event to the edge nodes related to that specific contestant’s rendering server cluster, which then feeds the updated metadata to the player frontend, allowing for the viewer to interact with the stream and help the contestant with their tasks by clicking on-screen prompts. See Figure 1—The RIVAL PEAK 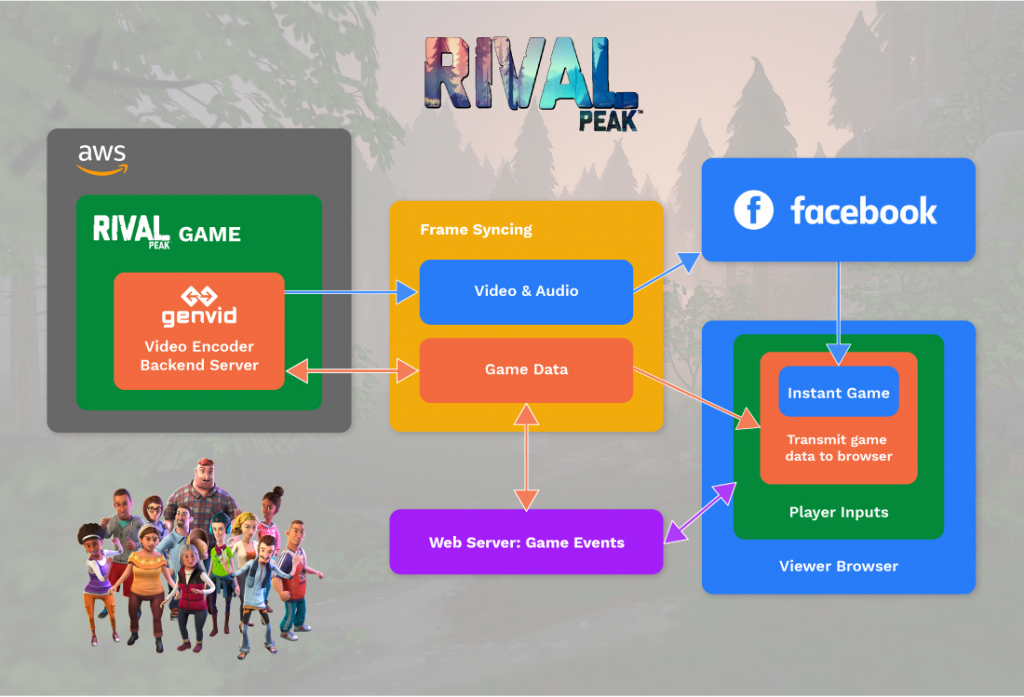 Livestreams are captured by AWS Elemental MediaLive and stored directly to Amazon S3 for archival/internal Video on Demand (VOD) purposes for a dynamic, ongoing development of the story by the Genvid writers.

The livestreams are available 24/7 worldwide. All viewers interact with the same streams, the same simulation, and all affect the same ending. At the end of the week, the points and engagements from the viewers are tabulated and scripts adjusted determine which contestant will be eliminated from the competition. This is then revealed on Wil Wheaton’s recap show, and the simulation is updated immediately afterward with the new episode’s consequences.

While we only needed 14 connected GPU units to run the full simulation, we also had to create development, QA, staging and production environments, requiring hundreds of GPUs in total.  Due to the demand required, we needed to add more capacity ASAP. AWS quickly worked internally and with Genvid on capacity planning for incoming events to ensure a successful launch day for their game. In addition, Genvid uses reserved instances on their G4 usage to further reduce the cost of their event-based usage of the AWS Cloud, and have now upgraded to the latest G5 for their upcoming project, ”The Walking Dead: Last Mile” which uses over 25 GPUs per environment..

Rival Peak successfully launched and is ongoing with their narrative driven engagements on Facebook, totaling over a billion points, generated via millions of unique interactions with viewers during the duration of the show.

“It’s been super helpful working the team over at AWS. Our questions have been answered quickly, and helped us get the G4 instance access and capacity we needed” Josh Downs, Director of Services – Genvid Technologies.

For more details on how Rival Peak operates, visit https://www.genvidtech.com/blogs/the-live-operations-of-rival-peak/