What I Learned from Ubisoft, Gearbox Software and others at devcom 2019 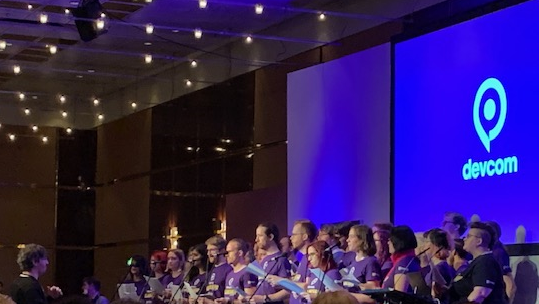 I had the good fortune to attend the devcom developer conference in Cologne, Germany this August. devcom is a precursor event to gamescom, Europe’s biggest trade fair for video games. However, as this is a blog for developers I’m going to focus on devcom. devcom is the official gamescom developer event and is roughly equivalent to the Game Developers Conference but on a smaller scale. It consists of talks given by game developers as well as a booth area for businesses to show off their development tools and several other fun things like an indie showcase and several mixers and parties.

The first day kicked off with a great keynote presentation by Cristian Pana of Ubisoft Massive talking about what the team learned from their years of game development and how they applied that learning to improve the development process for their latest titles, in particular Tom Clancy’s The Division 2. One thing Mr. Pana said that really resonated with me was “quality is the currency we have with our customers.” It would be easy for a company that’s made so many successful games to slack off a bit on sequels, but the customer obsessed mindset demonstrated by this team was clear in this talk, and I believe Ubisoft Massive really showed it in their last game. Another very interesting part of Mr. Pana’s talk was about making the game world the main character of the game. This is a great way to think about making a compelling space to play in.

The second days’ keynote really put narrative front and center, and in fact was called Building Borderlands 3 Narrative, presented by Randy Varnell of Gearbox Software. I’ll admit, I’m a dyed in the wool programmer and not a game designer by any means, so it’s always great to get the perspective of someone with a mastery of this craft. Of particular interest was how Mr. Varnell talked about the formation of the team and how they worked together being a key factor in the success of the narrative. In my own years of game development, getting your team working well together is critical in shipping a quality game and is prominently reflected in the quality of the end product. Borderlands 3 had not yet shipped when I attended this talk, but I have a feeling the story is going to knock your socks off!

If there were any general themes I noticed in the talks this year they were narrative, retention and ethics. This makes a lot of sense, they are all very relevant topics in game development today and they can be some of the more challenging areas to get right. The last two especially are often at odds.

As it was a “theme”, I listened to several talks about player retention. These talks were generally very well attended, and no wonder, retention is really the key to a successful game. I learned a lot from these talks. For instance, in one talk “Debunking the Myths of Retention” given by Oliver Kern of Lockwood Publishing I learned about the “critical moment” where a player basically becomes a fan. For example, in a free to play game, a customer who makes a payment on day 7 of playing the game will be significantly stickier in general than a customer who pays in the first 24 hours of play. Critical moments are found in other software, not just games, and these moments will help you define your core customers. Examples given were when a Twitter user follows 20 people, or in Dropbox when someone uploads a file. At this point the customer gets what you are about. It’s important for you to determine what the critical point is for your game and then act on that information to make sure the game is great for the player who hits that critical point, and to try to drive more of your players to the critical moment.

In a talk given by Shariq Manji of GameAnalytics, he presented a summary of their latest data covering over 70,000 mobile games and 1.2 billion players. There were some real gems of knowledge given, including a break down of games by genre and the required day 1 retention seen in the top 25% of games in that genre. For example, they’ve seen that word and trivia games need a day one retention of 43% to be in the top 25% of games, but a strategy game only about 30%. However, word and trivia games also tend to have the highest retention across day 1, day 7 and day 28. Also, did you know that casino and card games have the longest average session length of any other genre? Over 22 minutes for card and casino games! However, they have noticed that average session lengths have been dropping over time in general. You can find GameAnalytics 2018 report here, though the talk presented the latest data they had.

Ethics came up quite a bit. Actually, ethics were discussed in several of the retention talks. One talk that was dedicated to ethics was “How to improve the public perception of games and game creators” given by Kate Edwards, a long time industry advocate. Much of the talk was about how there is a public misconception that games are just violence fests which only appeal to boys, and what we can do to help as an industry to change this perception. I was surprised at how much involvement groups like the IGDA have in politics to work on this problem. We obviously know better and can come up with scores of examples to the contrary, but we as an industry need to engage the community and not just withdraw in to building our games if we want this perception to change. One quote from Ms. Edwards that really struck me was “intentionally addictive is worse than violent”, which is good to remember when dealing with user retention! You’ll serve your customers better by keeping them around with great content, not psychological tricks.

I also attended some interesting talks having nothing to do with any of the three themes I mentioned. One talk on machine learning in games pointed to a fantastic website I’d never seen, Papers With Code. Another talked about video games and high culture, thinking about how a video game could be considered to be a classical art form. Another was on how to do PR with zero budget. I even attended a talk given by the president of the Bundesamt für Sicherheit in der Informationstechnik, which is the German national cyber security authority (fortunately all the talks are given in English, my high school German is a little rusty!) The diversity of topics at devcom was great and I learned a ton of new things.

Aside from all the useful information gained from the talks, one of the best parts of a conference is the people you meet. devcom arranges several mixers and parties. You’ll also find ample opportunity to chat with your fellow attendees during lunch, out in the halls, before a talk, really anywhere. Everyone at this conference shares your love of making games and you’re sure to strike up a good conversation with anyone you chat with. Probably my favorite time at the conference was walking through the indie booths and talking with the developers while trying their games. These are passionate people who are really at the front lines of game development. They try new things just to see if they can do them. I got a lot of great perspective in to the future of games, from those dealing with tough topics like depression and anxiety to those that hark back to my early days of text based adventures but with modern twists. One of the reasons I’ve been in games so long is that there is really, truly, always something new.

So that’s a brief window in to my time at devcom 2019. I’ve just read an article that says devcom 2020 will be three days long. If you live in Europe and are a game developer, I encourage you to find a way to get to devcom. Heck, even if you live elsewhere, if you can manage, I think it’s worth a trip. I hope to see you there next year!