Milk VFX: Getting the drift of cloud 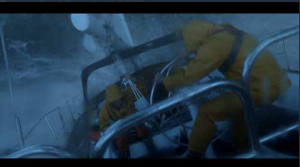 It’s a truism that filmmaking and water don’t mix. The malfunctioning mechanical shark on Jaws, the aquatic heart of darkness that was James Cameron’s The Abyss, or the now legendary nightmare of Waterworld – if you’re shooting on or around water, you’re asking for it. Luckily, we have an amazing array of digital tools available to us today and all those problems are solved. Right? Alas, no. Digital water is just as much a challenge as the real thing. Any VFX supervisor worth his sea salt will tell you that creating realistic digital water effects is always a challenge.

London-based Milk VFX took up that challenge big-time when they embarked on the effects for Adrift, an American thriller about a young couple stranded in the middle of the ocean after a hurricane.

“For Adrift, the biggest technical challenge was simulating and rendering the ocean over very long shots,” says Benoit Leveau, Head of Pipeline at Milk. “The ocean surface had to be animated by hand to follow the director’s vision, and only then could we first simulate it and then render it, which means there were a lot of iterations to get it right. And with two very long shots at 3000 and 7000 frames long, we knew from the beginning that our local infrastructure would not cope with the amount of rendering required. Thus we planned to use the cloud for rendering.”

In 2017, AWS acquired Thinkbox Software. Thinkbox offered a number of top rate tools, but what attracted AWS especially was Thinkbox’s Deadline render management solution. It was originally used as an on-premises solution. Render workloads are some of the most computeintensive for a visual effects or animations studio and can require a notable amount of infrastructure, especially as VFX becomes more and more elaborate and complex.

“You don’t really see movies anymore without some VFX,” says Colin Cupp, Senior Product Marketing Manager at Amazon Web Services. “Even documentaries have VFX now. Visual effects studios are being challenged with raising the bar with every production. The result is that any given studio could have multiple projects they’re bidding on and if they land a couple of them, chances are their on-prem won’t be able to accomplish that job and so they need to extend. Their options are they can forklift in a bunch of machines or they can go to the cloud.” 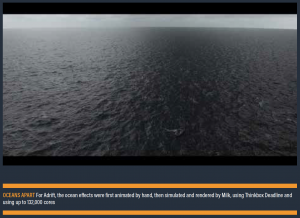 Milk needed a huge burst in rendering power to complete its oceanic effects for Adrift, and Thinkbox’s Deadline provided the solution.

“We needed to write some in-house tools to facilitate the process,” says Milk’s Leveau. “In the end, all of the rendering for this project was done on the cloud over a six-week period. On average we used 80,000 cores, peaking at 132,000 cores for the last two weeks.”

Since Milk opened its doors in 2013, Thinkbox Deadline allowed the company to manage its local render farm, but it also helped Milk to move to cloud resources for production as early as 2015. Using AWS has meant that Milk was able to use the EC2 Spot Instances, which are cheaper interruptible render nodes. It’s also enabled them to tap into different resources, with more cores and more RAM, and scale as needed for each shot and each project. AWS/Thinkbox has also provided continuous support and collaboration in getting the best out of the cloud resources.

“Simulations like those in Adrift are some of the most compute-intensive components of VFX work,” says Cupp. “You are not going to render anything that’s going to be any denser or more complex than that. You have to have the physics right and it has to be art directable. It’s millions of particles in every frame. We’re proud of that project.”

“Most companies in VFX are now using the cloud to some extent,” continues Leveau. “For large studios with a big local render farm, they will use the cloud for peaks of production but will still largely rely on their local infrastructure. But there’s also a trend, which we’ve been part of with our recent projects, including Adrift and our YouTube Originals’ new series Origin, where studios use the cloud to tackle projects that they couldn’t have before. It also allows studios to scale up and handle multiple projects simultaneously.

“The future will see even more reliance on the cloud with existing studios moving their whole infrastructure – storage, compute, and also artist workstations – to the cloud, while new virtual studios will open entirely in the cloud.”

Learn more about Milk VFX in this case study.