In this blog post, I will detail how to create a cost-effective, secure, and resilient VPN remote access architecture on AWS. With the increasing number of full-time remote employees and a mobile workforce, the requirement for remote access has moved from a nice-to-have feature to one that can have a significant financial impact in the event of outages. Traditionally, equipment running in data centers provided remote access, which made increasing the resiliency of the remote access service expensive or, sometimes, technically unfeasible. With other mission-critical workloads already deployed in AWS, enterprises are now looking to migrate their remote access workload into the AWS Cloud to take advantage of the resiliency AWS provides.

The basic components of a remote access service include a VPN server and a VPN client application installed on the end-user’s device. The need to remember when and how to start a VPN connection can have a negative impact on end user productivity. Prior to establishing a VPN connection, the device is in a disconnected state, which affects the ability of enterprise IT to monitor and manage mobile end-user devices.

For ease of deployment, the goal is to provide one VPN configuration to all clients. Using a combination of AWS and Microsoft technologies, we can accomplish this. Figure 1 illustrates the resulting Always On VPN architecture running in AWS. 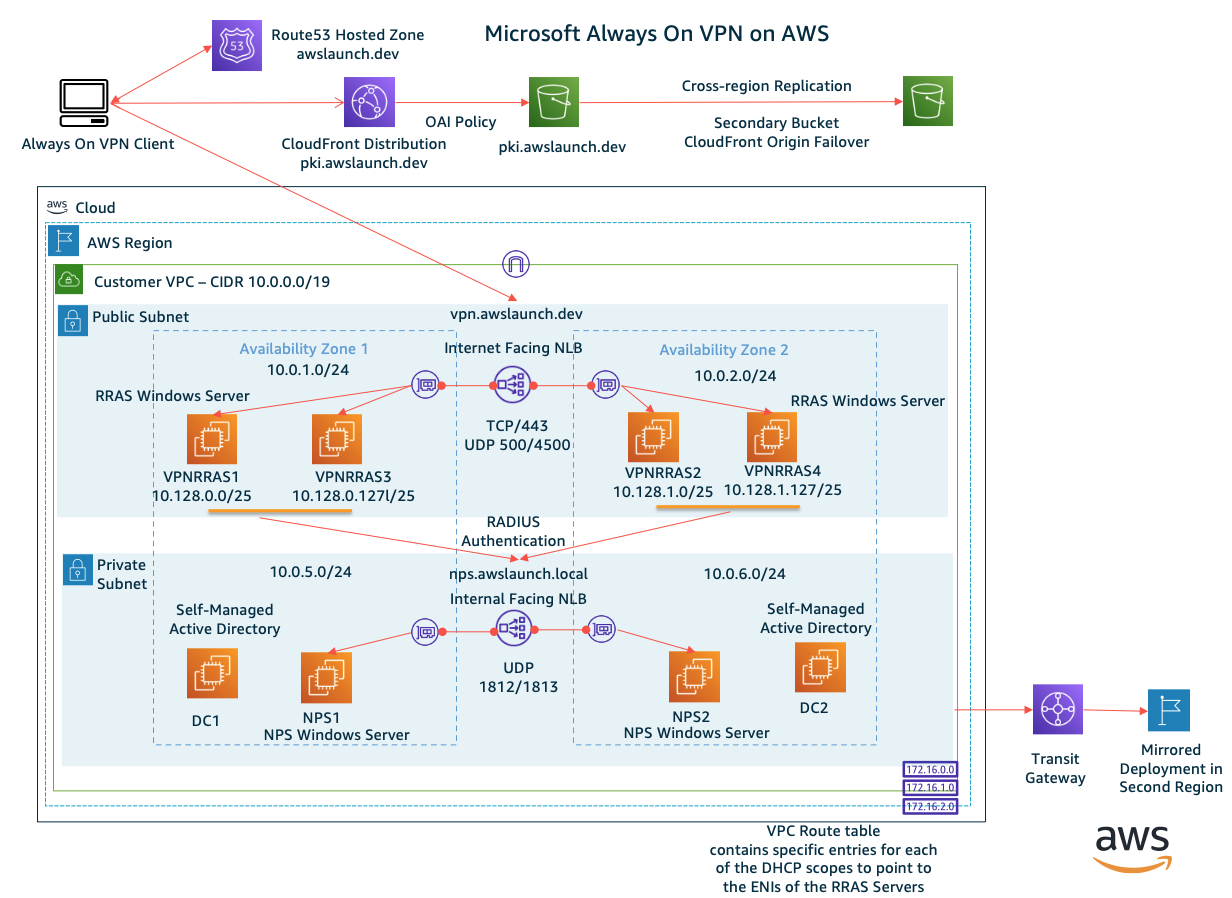 Implementing Always On VPN: Modern Mobility with Microsoft Windows 10 and Windows Server 2022 book by Richard Hicks completely explains Always On VPN. This book goes into the exact configuration details of the Microsoft components required for Always On VPN implementation.

Complete the following steps to create the Always On VPN architecture on AWS:

This solution heavily relies on security certificates. The Microsoft guide, Always On VPN Deployment, explains how to create the required certificate templates. These templates include certificates for the VPN (RRAS) servers, NPS servers, users, and devices. Because the Secure Socket Tunneling Protocol (SSTP) uses HTTPS for transport, a public or internal certificate authority (CA) should issue a respective certificate. If internal CA issues the certificate, the certificate revocation list (CRL) must be publicly accessible. Certificates in this solution are all generated internally from a 2-tier Microsoft PKI deployment on AWS. The QuickStart Microsoft Public Key Infrastructure on AWS provides more details about running Microsoft PKI on AWS.

When looking at this solution, some common questions may be “How many RRAS (VPN) servers do I need?” and “What EC2 instance size should I choose?”. Currently, there are no published RRAS capacity planning guidelines. Some organizations may have a negligible amount of network traffic going through the VPN tunnel, and other organizations may require all remote access traffic to flow through the VPN tunnel. Understanding the expected network traffic flow will help to determine capacity requirements. The Amazon EC2 instance network bandwidth document explains the network throughput capacity across the Amazon EC2 instance families.

Another consideration is the total number of connections that need to be supported in the environment. Please note that, in total, there are 2 connections—one for the user and one for the device—for each deployed client. Once the total number of connections is determined, decide on the overall VPC client IP address range to assign. Each RRAS server must have a unique DHCP CIDR range of IP addresses to hand out to the clients connecting through the VPN, which will be entered later into the VPC route tables. Divide the overall VPC client CIDR range by the number of RRAS servers. Refer to Figure 2 for an example of the VPC client CIDR ranges assigned to each RRAS server.

In this example, the total number of clients to be supported is 200. Each Amazon EC2 instance hosting the RRAS can handle up to 100 connections. So why are there 4 servers instead of just 2? Because we need to consider the resiliency of the solution. If we experience a complete AZ failure, we need capacity in the secondary AZ to handle all the client traffic. This architecture is an example of static stability using AZs.

We place the Amazon EC2-based RRAS servers into the public subnets across AZs and regions using the following configuration.

Except for the DHCP range of addresses that are allocated to each RRAS server, their configuration is identical. Authentication is provided by the NPS server using RADIUS Authentication. The value for the RADIUS server name will be the DNS name of the internal facing AWS NLB. The only authentication methods allowed are Extensible Authentication Protocol (EAP) and allow machine certification authentication for IKEv2. The SSL certificate generated for SSTP connections is specified in the SSL Certificate Binding section. Additional VPN optimizations and PowerShell scripts can be found on Richard Hicks’ GitHub.

The NPS servers provide authentication for VPN clients connecting through the RRAS service. Figure 3 illustrates the NPS servers placed into private subnets. These NPS servers have an identical configuration that includes the following elements:

The device tunnel is established as soon as the workstation is booted and has a network connection. The user tunnel is established after the user logs into the workstation. The profiles can be deployed using either the Microsoft Endpoint Manager or via PowerShell with a XML configuration file that is deployed by SCCM, Active Directory GPO, or other client deployment management tools. Perform the following steps on the client:

The Windows client will show a status of connected if the VPN connection is successful, as shown in Figure 4. 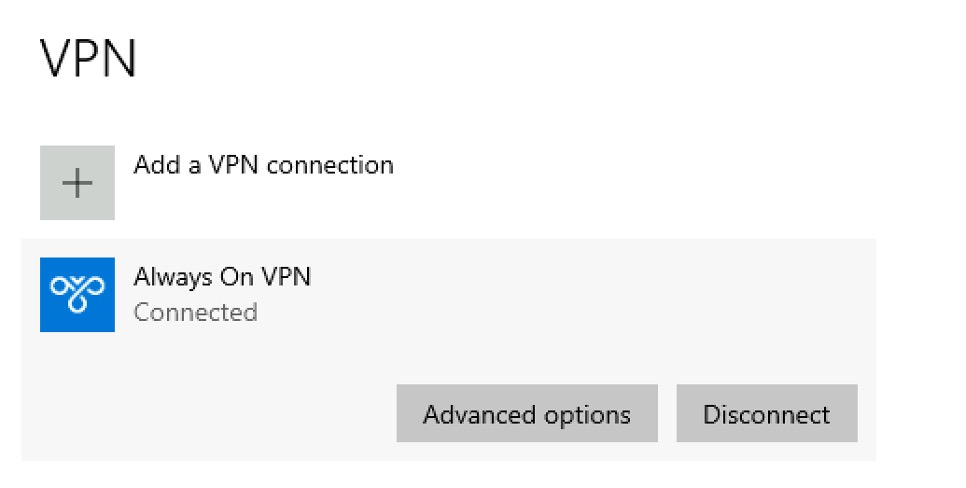 All elements of the solution should be resilient. The certificate revocation list (CRL) is included within the properties of issued certificates. This CRL needs to be available to the client when establishing the VPN connection over HTTP. An internal Microsoft CA is used to issue certificates in this example. Amazon CloudFront and Amazon Simple Storage Service (Amazon S3) will provide the resilient architecture for public availability of the CRL.

Once a client connects, the client will be given an IPv4 address from the static pool defined on the RRAS servers. For each VPN client CIDR range, the VPC route table will contain an entry to the ENI of the RRAS server that is handing out those addresses. Destination hosts will then know how to route traffic back to the VPN client.

To achieve protection from regional failure, you will need to create a primary and failover set of DNS records within Amazon Route 53. Route 53 DNS alias records are created to point to the internet-facing NLBs in the primary and secondary regions. See Failover routing in the Amazon Route 53 documentation for more information.

The architecture must be resilient to the failure of a single Amazon EC2 instance, an AZ, or an entire region. By selectively shutting down individual Amazon EC2 servers across the environment, these failover scenarios can be tested. As a feature of Always On VPN, without any user interaction, the VPN client will recover and continue to stay connected to the VPN architecture during these failover scenarios.

As configured, the architecture represents an active/passive configuration. It is possible that other Amazon Route 53 routing policies like Geolocation, Latency, or Weighted could be used to create an active/active configuration while still enabling a complete regional failover. Failing over an entire region will take significantly longer than failover within a region. Amazon Route 53 alias records have a TTL of 60 seconds, along with any DNS caching at the client side.

As the number of remote workers has increased, providing remote access is a core business requirement. For organizations that have a large installed base of Microsoft Windows 10+ clients, the ability for the Windows 10+ client to use Always On VPN is a huge productivity booster. With Always On VPN, whenever the device is off the corporate network, the client will automatically tunnel a VPN connection without the need for user interaction or additional client-side VPN software.

Ready to get started? Read more about Microsoft Workloads on AWS and other blog posts related to migrations on the AWS Cloud Enterprise Strategy Blog and the AWS Architecture Blog.