In December 2019, we announced our first Local Zone in Los Angeles. As a refresher, AWS Local Zones are a type of infrastructure deployment that place compute, storage, database, and other AWS services close to large population, industry, and IT locations. Local Zones extend the capabilities of an AWS Region – what we called “parent” AWS Region. As of November 2022, AWS has expanded Local Zones to 21 metropolitan areas, and announced plans to launch in 30 metros across 25 countries globally. This means that you can deliver single-digit millisecond latency applications to your end-users in more locations.

Accessing applications on a Local Zone is similar to how you would do it in an AWS Region. You can provide access through the public Internet, so employees and end users can use public IPs to access the applications. However, if you want private access, then you can use either a VPN or AWS Direct Connect. This blog will focus on the second option.

In June 2022, AWS announced AWS Direct Connect support for all AWS Local Zones. Prior to this announcement, connectivity from a Direct Connect location to a workload running in a Local Zone (except for the Los Angeles one) would flow through the parent AWS Region of that specific Local Zone. This translated into an increased latency when you wanted a private and dedicated connection between your on-premises locations and Local Zones. With this announcement, network traffic takes the shortest path between Direct Connect locations and Local Zones, both for current and future ones. This new routing behavior reduces the distance that network traffic must travel, thereby decreasing latency and helping make your applications more responsive.

You can leverage Local Zones when you want to bring AWS resources close to your end-users or on-premises locations, and Direct Connect to achieve low latency, private, and dedicated connectivity between resources in AWS and on-premises workloads. The most common customer use cases are as follows:

You can find more customers’ use cases on the Local Zones website. Let’s now review different architectures showing how you can use Direct Connect to create a dedicated, private, and low-latency connection between your workloads in AWS and on-premises locations. 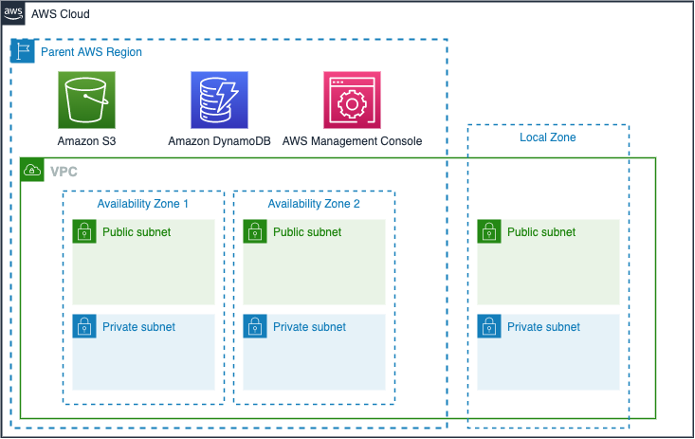 Figure 1. VPC with subnets on both AWS Parent Region and AWS Local Zone 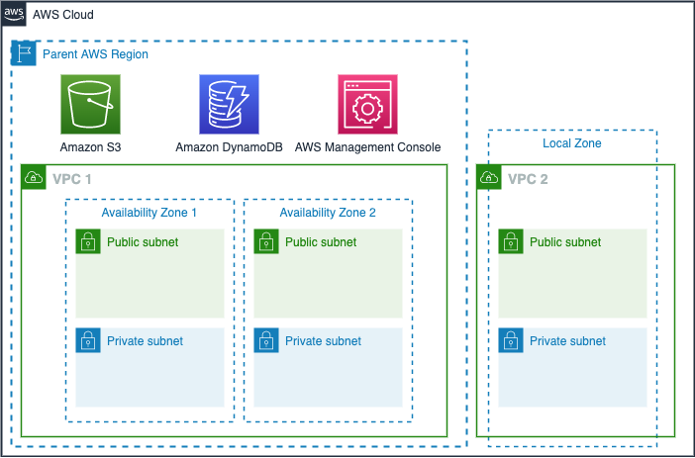 Figure 2. VPC with subnets only in either an AWS Region or AWS Local Zone

When connecting your on-premises environment to your VPCs via Direct Connect, you utilize Virtual Interfaces (VIFs). There are three types of VIFs – private, transit, or public – which are used to connect to different types of endpoints inside of AWS. Regardless of where your subnets are located, the VIFs are configured in the same way. However, depending on the setup you choose, you may utilize the direct communication to the Local Zone from the Direct Connect location, or you must pass through the parent AWS Region to reach the subnets in the Local Zone.

In this section, we’ll detail different reference architectures when connecting Local Zones and on-premises locations via Direct Connect, and how the traffic is routed through the AWS backbone. That way, you’ll know exactly how to architect your applications to achieve the lowest latency possible for your hybrid setup.

In the first option, you are connecting your on-premises locations directly to Amazon VPC via Direct Connect using a private VIF attached to a Virtual Private Gateway (VGW). This option applies either when you have VPCs with subnets in both an AWS Region and Local Zone, or VPCs with subnets only in a Local Zone. 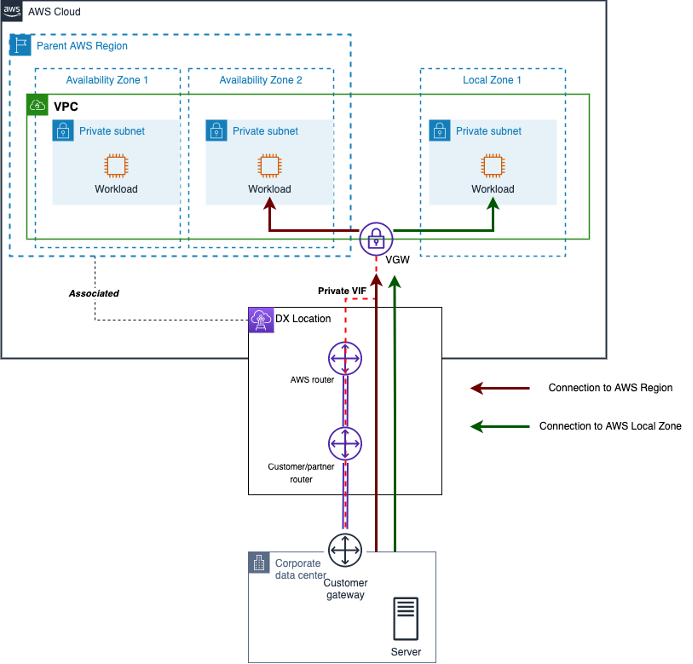 In this scenario, the remote/on-premises CIDR ranges are advertised via the private VIF to AWS, as Direct Connect only supports dynamic routing using Border Gateway Protocol (BGP). To have those entries propagated in the subnet route table, you must enable route propagation in the VGW. This option is recommended over creating those routes manually in your VPC route tables. An example of what the VPC route table would look like is as follows:

When using a Private VIF attached directly to a VGW, traffic from the Direct Connect location destined to resources in the Local Zone will take the shortest path, and they won’t transverse via the parent AWS Region.

Private VIF attached to a DXGW

A slight modification to the first approach above involves the use of a DXGW. In this case, the private VIF is attached to the Direct Connect Gateway, which also has associated the VPC’s VGW. This option applies either when you have VPCs with subnets in both an AWS Region and Local Zone, or VPCs with subnets only in a Local Zone. 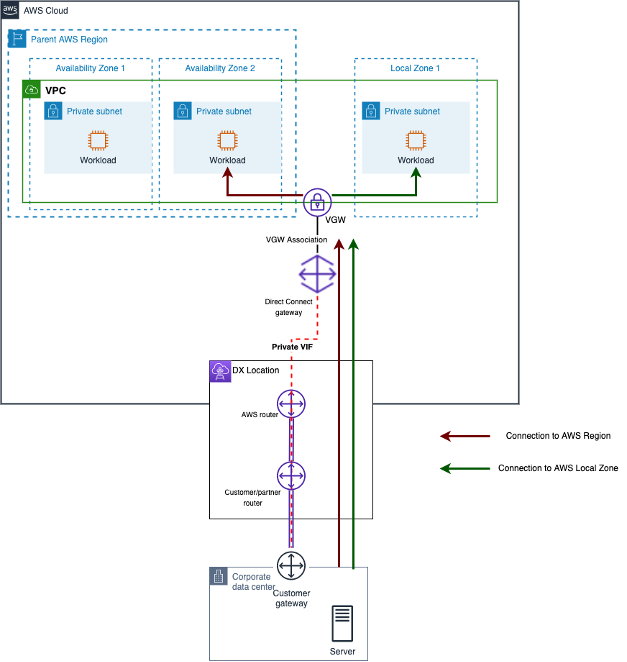 In a similar pattern to the first approach, the remote/on-premises CIDR ranges are advertised via the private VIF to AWS – in this case to the DXGW. Then the DXGW propagates the routes learned from the private VIF to any VPC to which it is associated. To have those entries propagated in the subnet route table, you must enable route propagation in the VGW (recommended option). An example of what the VPC route table would look like is as follows:

When using a Private VIF attached to a DXGW, traffic from the Direct Connect location destined to resources in the Local Zone will take the shortest path, and they won’t transverse via the parent AWS Region.

Transit VIF attached to a DXGW 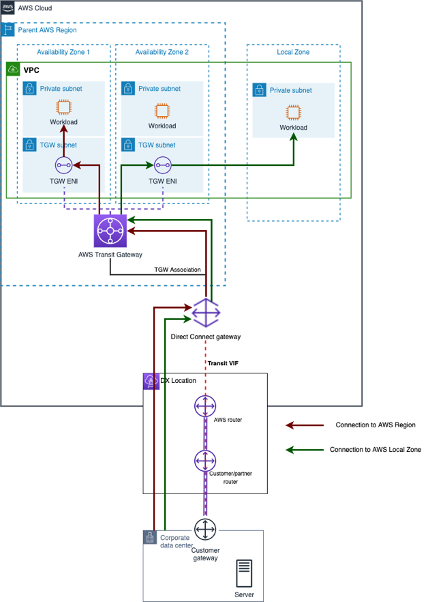 In this case, the remote/on-premises CIDR ranges are advertised via the transit VIF to the DXGW. You can propagate these routes into any Transit Gateway route table by configuring the propagation of the DXGW attachment to those route tables – this option is recommended over the creation of static routes.

When using a Transit VIF attached to a DXGW, traffic from the Direct Connect location destined to resources in the Local Zone will be routed to the Transit Gateway in the parent AWS Region. The traffic will be forwarded to the VPC via the Transit Gateway attachment (TGW ENIs) placed in a subnet in an Availability Zone in the parent AWS Region. From there, the traffic will be routed to the subnet in the Local Zone using the underlying fabric of the VPC. Therefore, you’ll experience an increase in latency between on-premises resources and Local Zones when using this option. 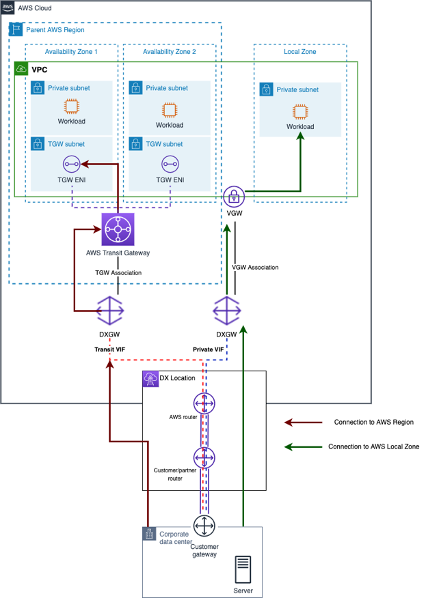 In this case, the remote/on-premises CIDR ranges are advertised both via the private VIF and the transit VIF to AWS – you can decide to advertise the same ranges or different ones if you want to achieve traffic segmentation. Regarding the VPC routing in the Local Zone’s subnets, the on-premises ranges will be dynamically advertised by the VGW – if route propagation is enabled. To access other resources within AWS using the Transit Gateway, you can create a static route pointing to the Transit Gateway attachment. An example of what the VPC route table would look like is as follows:

When using a transit VIF and a private VIF to access the VPC:

You can now connect your on-premises locations to Local Zones using the shortest path possible in the AWS backbone via Direct Connect connections. With this routing configuration, you can achieve single-digit millisecond latencies when using Direct Connect connections close to the Local Zone, while you utilize dedicated and private lines for your hybrid architecture. This applies for current and future Local Zones.

Pablo is a Network Specialist Solutions Architect at AWS, where he helps customers to design secure, resilient and cost-effective networks. When not talking about Networking, Pablo can be found playing basketball or video-games. He holds a MSc in Electrical Engineering from the Royal Institute of Technology (KTH), and a Master’s degree in Telecommunications Engineering from the Polytechnic University of Catalonia (UPC).

Tega is a Technical Account Manager at AWS based out of Stockholm, Sweden. Prior to this role, he worked in multiple roles on Network Infrastructure design and operations across different countries in Africa. He’s passionate about technology, and helping customers architect, build, and operate their solutions efficiently on AWS. Outside of work, you’ll find him training for long-distance races, watching movies or traveling to visit friends and family.