Our customers ask us how they can secure access to their Amazon Elastic Container Service for Kubernetes (Amazon EKS) or Kubernetes on EC2 clusters. Our enterprise customers have implemented Active Directory (AD), Active Directory Federated Services (ADFS), or Lightweight Directory Access Protocol (LDAP) for identity and access management on-premises, and use AWS Identity and Access Management (IAM) in the AWS cloud. Many of these customers have adopted Kubernetes on-premise and want to use a common role-based access control (RBAC) policy for controlling access to Kubernetes resources, both on-premise and in AWS Cloud.

This prompted our investment in an open source initiative (initially driven by Heptio) called aws-iam-authenticator, to develop a tool that uses AWS IAM credentials to authenticate to a Kubernetes cluster. The Amazon EKS open source team uses the AWS IAM Authenticator as a starting point to map AWS IAM to Kubernetes RBAC. AWS and Heptio engineers are core maintainers of the project, and worked with a set of exceptional community engineers to donate the project to the Cloud Provider Special Interest Group.

In this post we will show you how to use AWS Single Sign-On (SSO), AWS Managed Microsoft Active Directory Service, and the AWS IAM authenticator to control access to your Amazon EKS cluster running in the AWS cloud. This also works with a self-managed Kubernetes cluster created with kops on AWS. We chose to leverage AWS managed services to simulate third-party identity and access management tools that you may be using on-premises, and then federate access to AWS Identity and Access Management (IAM).

To implement this approach, you will use the following services:

For detailed descriptions of other unmanaged solutions for federated access with identity providers that support SAML 2.0, please refer to Enabling Federation to AWS Using Windows Active Directory, ADFS, and SAML 2.0 and How to Implement a General Solution for Federated API/CLI Access Using SAML 2.0.

Before you get started, be sure that:

Note: If you are using an on-premises AD, you will need to perform an additional step before you can establish SSO access to AWS accounts in step 7 above. For that step, you can either:

Bringing It All Together 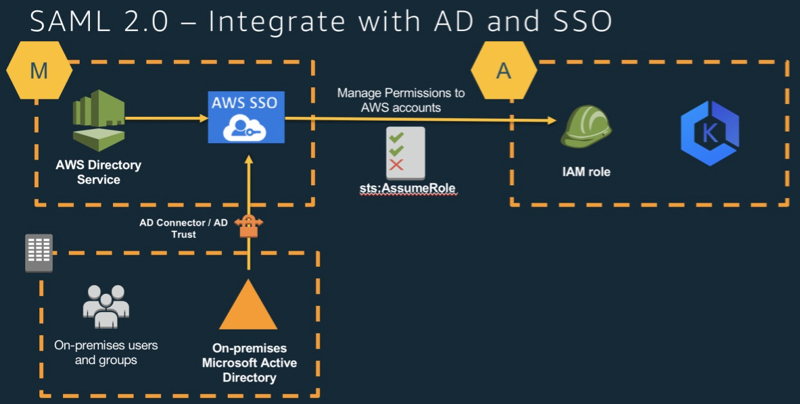 In the next few sections, we will map the AD groups to AWS IAM roles via AWS SSO AssumedRoles. We will then use Kubernetes configMaps and roles to map the associated IAM roles to Kubernetes RBAC roles. This will be done by leveraging the open source AWS IAM Authenticator to pass an IAM identity from kubectl.

For information on how RBAC within Kubernetes works, please read the Kubernetes reference documentation.

We will create two AD groups (AWS-EKS-Prod and AWS-EKS-Dev) in the Microsoft AD. We will also create a devuser and an adminuser, and add the users to the AWS-EKS-Admins and AWS-EKS-Dev groups respectively.

Perform the following from the Windows EC2 instance that has joined the AD Domain:

2. Assign the AD Groups to the AWS SSO

Now that we have created the AD Users/Groups, we will assign the groups (and hence users) access to AWS Account B (where the EKS cluster resides). We will also add a permission set that allows Account A (master) to assume a role in Account B (member) and thereby access resources in that account.

Navigate to AWS SSO Console in Account A (master) and perform the following:

Behind the scenes, AWS SSO performs the following operations in Account B (member):

At this point, we have set up Microsoft AD to control authentication to the AWS SSO user portal. We have also set up partial authorization by specifying which AD group has been assigned access to Account B (where the EKS cluster resides). However, access control (i.e., the level of permissions granted to the AD users) has not yet been specified. In this section, we will demonstrate how Kubernetes RBAC can be configured to define access control for AD users/groups via federation through an AWS IAM role.

Before proceeding with the steps below, be sure that that:

Note: If you are using Amazon EKS, please see Getting Started with Amazon EKS for detailed steps to configure your Amazon EKS cluster.

First, let’s create a demo namespace called demo-service. We will use this namespace to illustrate full and read-only access control via Kubernetes RBAC for the AWS-EKS-Admins and AWS-EKS-Dev AD groups.

Next, let’s create the associated Kubernetes Roles, one each, for the AWS-EKS-Dev and AWS-EKS-Admins groups.

Next, we will apply these Roles to our cluster to enable them.

Now, let’s modify our authenticator config to allow EKS access to these groups. You will need to get the role arns for the roles that IAM assumes for the two respective AD groups, AWS-EKS-Dev and AWS-EKS-Admins. You can do that using the following command:

Next, you will need to edit the aws-auth ConfigMap:

This command will open the file in your editor. We can then add the following to the mapRoles section. Make sure to:

Once you have added that, save and close this file.

Now we can create new KUBECONFIG files for each set of role bindings, one for dev users and one for admin users. Copy your kubeconfig file and then modify the user section for your eks cluster to look like this.

Note: For the -r parameter above, specify the full rolearn in this case, including the path in the rolearn.

Testing That All This Works

Let’s try issuing requests to the apiserver to validate that end-to-end authentication and authorization are working. To authenticate as an AD user, obtain the environment variables for that user from the AWS SSO portal. Access the portal url as follows:

Also, make sure that the associate kubeconfig contexts are set when running the tests below:

In this post we showed how an identity in AWS Microsoft Active Directory can assume an AWS IAM role via AWS SSO to authenticate using the AWS CLI. Subsequently, the AWS IAM role can be mapped to Kubernetes RBAC via K8s configMap, clusterRole and rolebinding to authorize the active directory user with access permission in kubernetes namespaces.

You can learn more about the project here: AWS-IAM-Authenticator and we welcome your feedback and contributions.