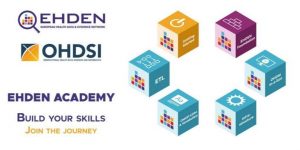 The EHDEN Academy is launching a no-cost online e-learning platform to train researchers on the mapping of patient data in the OMOP Common Data Model and the use of Observational Health Data Sciences and Informatics (OHDSI) tools to perform health analysis. It is a collaboration between European Health Data & Evidence Network (EHDEN) and OHDSI.

The EHDEN Academy is the global educational resource for those working with data to generate real-world evidence and outcomes research. The EHDEN Academy is open to the public to better support the need for technical expertise in Europe and abroad. The EHDEN Academy supports the initiatives of EHDEN, as well as enabling the growth of OMOP health data’s global footprint for broader analysis and insights into world health.

Being able to generate up-to-date health insights across global populations can positively impact world health. Imagine the improvements to wellness if it were possible to understand disease prevalence and treatment effectiveness across populations of millions or billions of people. But a myriad of electronic systems, data formats, languages, and coding systems make it difficult to consolidate health data in a meaningful way. Preserving patient privacy and respecting the national and local regulations adds complexity, as well.

An important part of the EHDEN ecosystem is the education and training of stakeholders, including academia, industry, heath technology assessment (HTA) bodies, payers, and regulators. EHDEN trains on environments created using the OHDSIonAWS and OHDSI-in-a-Box projects and automation developed by Amazon Web Services (AWS) and IQVIA to deploy the OMOP Common Data Model and OHDSI tools.

As EHDEN gained momentum, in-person training sessions could no longer scale to meet the demand, and they created EHDEN Academy. The EHDEN Academy runs on AWS using an open-source learning platform called Moodle. The team got started by using an AWS Marketplace offering, which allowed them to deploy a working instance of Moodle with a single click. Moodle delivers the video lectures and hosts the discussion boards for EHDEN Academy students

But to get hands-on experience with the OMOP Common Data Model and OHDSI tools, students need lab environments. EHDEN used an Amazon Machine Image (AMI) of a lab system and automation to help users quickly deploy it into their own AWS account, called OHDSI-in-a-Box. The EHDEN Academy also uses Amazon CloudFront to help provide quick response times to students around the world.

OMOP and OHDSI – the foundations of EHDEN

Health data, even within Europe alone, is diverse. The complexity only increases when you include health data from around the globe. The OMOP Common Data Model was created for the purpose of storing patient health data originating from a plurality of sources. OMOP enables the consolidation of health data expressed in more than 100 different vocabularies, ontologies, and coding schemes by providing mappings between them. This simplifies the transformation process to bring new health data into OMOP.

Once data is in OMOP, you can run standardized analytics against the data. Users can write an analysis one time and then execute it across any number of OMOP data sources. EHDEN is using this foundational capability to build its data network in Europe. Because we can bring the analytics to the data, the patient health data can stay privately within owners’ control, only allowing users to see the anonymized output of their analysis.

Since it is possible to create generalized analytics against OMOP formatted data, the team developed the OHDSI toolset, a suite of open source tools. These tools include a range of common health analysis, from population characterization and cohort building to treatment pathway analysis and patient outcome prediction. OHDSI users can now build tools based on best practices and use well-known analysis techniques.