Having a disaster recovery (DR) strategy is an essential part of business continuity and is an important part of designing your workload for resilience. Resilience means that your application, and its supporting infrastructure, always performs its intended functions correctly and consistently over time.

In some cases, customers who host their primary workloads on the cloud choose to use another cloud provider for DR. Reasons for that might be compliance, regulatory requirements, or because the organization has a mandate to adopt a multi-cloud strategy.

In this 2-part blog series, I address one use case for a sample application hosted on Google Cloud Platform (GCP) with a requirement to use AWS Cloud as a DR site. I review the steps to build connectivity between GCP and AWS, replicate a source environment (GCP) to AWS using AWS Elastic Disaster Recovery (AWS DRS), test, and failover from GCP to AWS. Finally, in part 2, I failback from AWS to GCP, to follow up the DR exercise.

The following diagram depicts the general architecture for the DR solution from GCP to AWS. 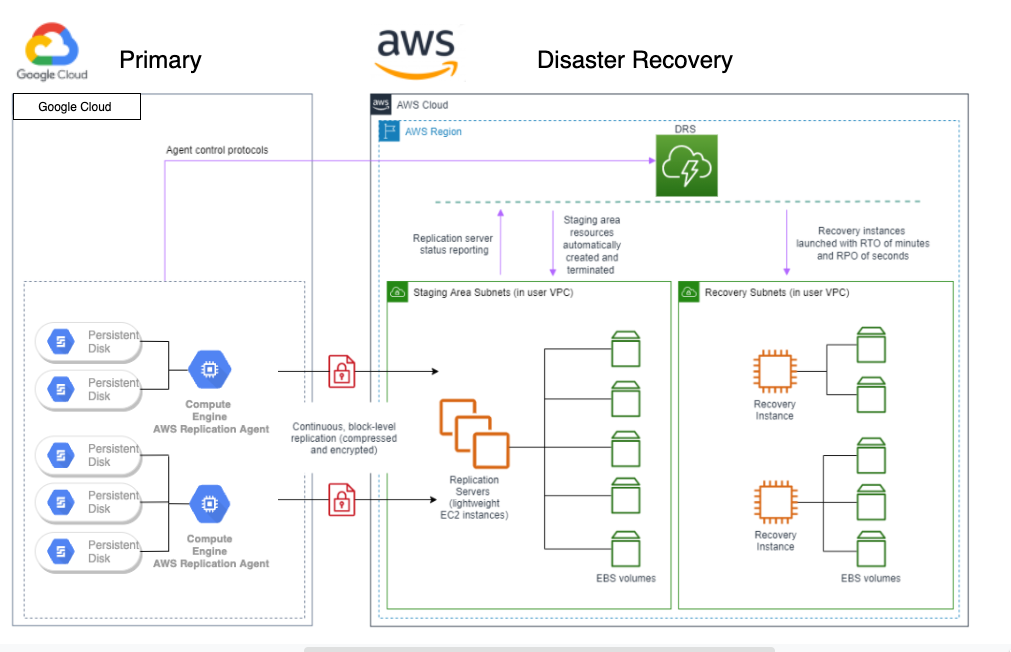 In part 1 of this blog series, I walk through the following:

I start by building the connectivity required for the replication. After completing this part, the result will be similar to the following diagram:

a. Create the networking components on GCP and AWS.
b. Establish a site-to-site VPN between GCP and on AWS.
c. Meet AWS DRS prerequisites.

a. Create the networking components on GCP and AWS

First, I create a Cloud Router following the steps in the Cloud Router documentation. Under Network, I choose dr-vpc (created as part of the prerequisites, step 2). Under Region, I choose us-central1 (Iowa). For Google ASN, I choose 65444. 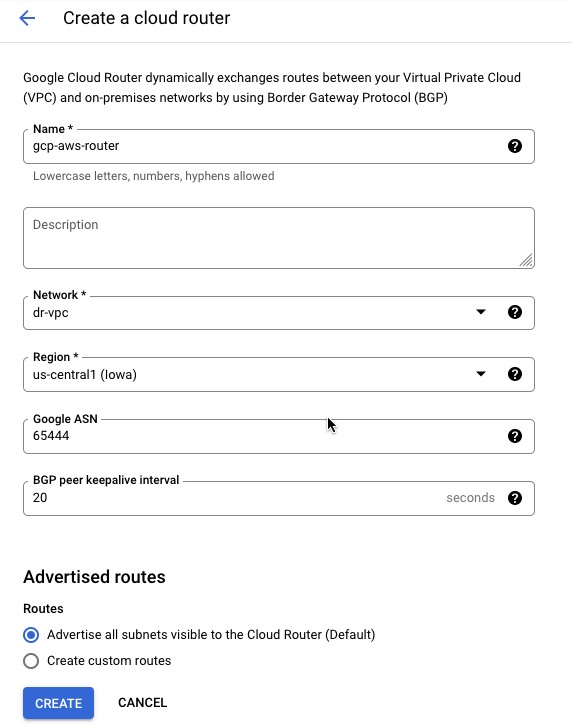 Next, I follow the guide in the Cloud Architecture Center to create a VPN connection on GCP. First, I select the type of VPN connection as high availability (HA), then I create a Cloud HA VPN gateway. I provide a name, a VPC (dr-vpc), and a Region (us-central1). 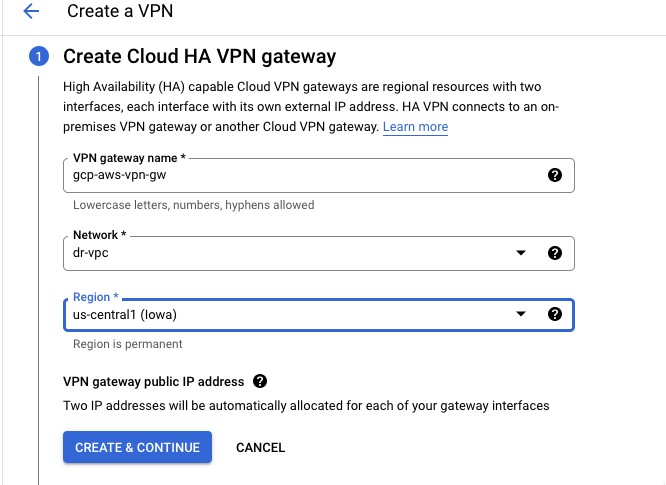 After the VPN gateway is created, it is assigned two public IP addresses. Take note of the IPs because we use them later. 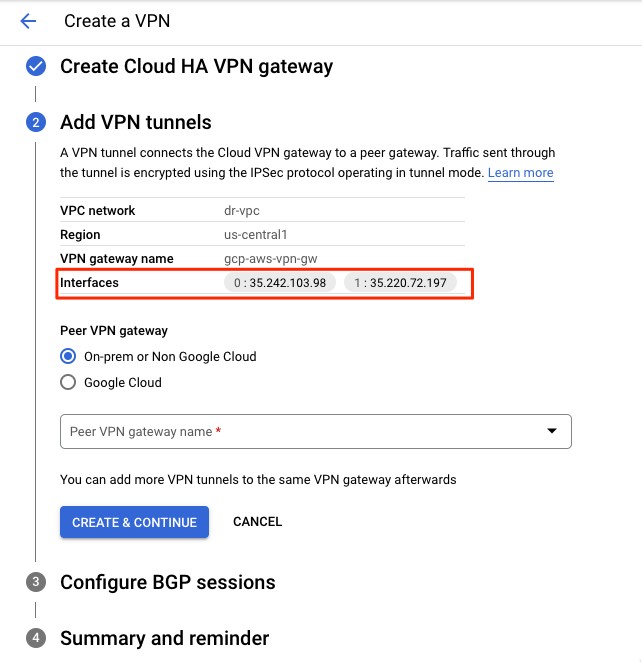 I create an internet gateway, and attach it to my VPC. Check steps in the Amazon VPC User Guide for instructions.

I use default Amazon ASN (64512) and attach it to the Amazon VPC I created earlier. Check detailed instructions in the AWS VPN User Guide. 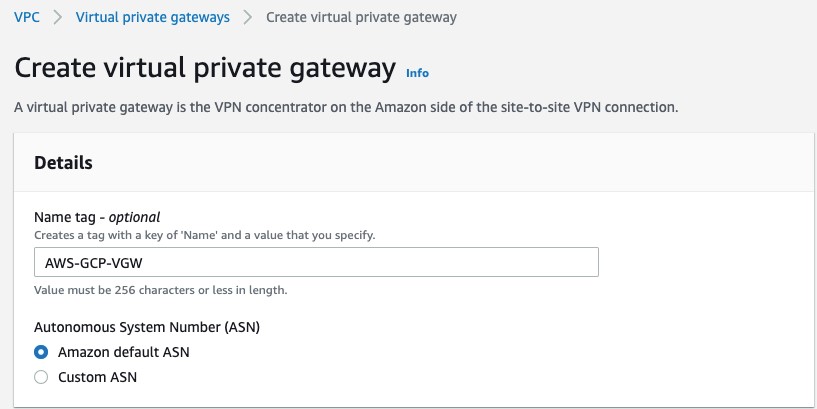 After I create the virtual private gateway, I attach it to my Amazon VPC.

I create two customer gateways, one for each tunnel. I provide the ASN number and the IP address in earlier steps. I repeat the same steps for the second customer gateway by providing the second IP address. I do not include the steps to configure the second tunnel here. Check steps in the AWS VPN User Guide. 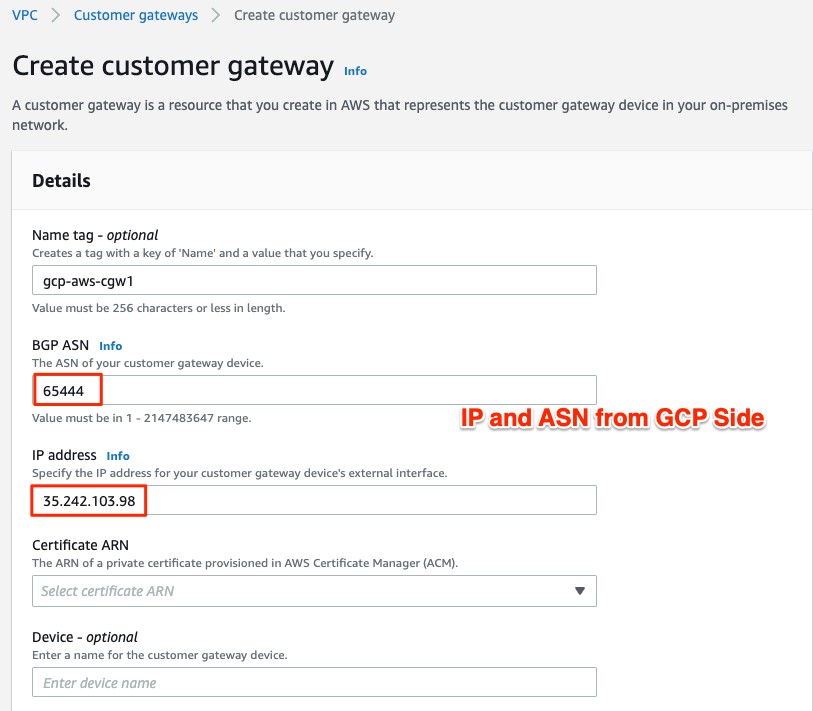 After I complete the creation of the customer gateway it shows as Available.

b. Create a site-to-site VPN between AWS and GCP

Note: Before you proceed, make sure the routing tables and security configuration (for example security groups, network access lists, and firewall rules) support communications between the two VPCs on GCP and AWS.

Now that we have the networking components up and running, I bring all the pieces together by creating a site-to-site VPN connection. In the AWS management console, under Virtual Private Network (VPN), I choose Site-to-Site VPN Connection and select Create VPN Connection. I give it a name, provide the virtual private gateway created and the customer gateway ID created earlier. For routing, I choose Dynamic, which requires Border Gateway Protocol (BGP). You can keep the rest of the configurations as default. For detailed steps, refer to Create a Site-to-Site VPN connection.

I repeat the same steps for the second VPN tunnel.

Let’s now switch to GCP. I go back to the page where I started creating the VPN connection, and I continue to create the peer configuration. I select Add a peer VPN gateway and choose two interfaces. Under Peer VPN gateway interfaces, for Interface 0 IP Address, I add the IP address of the Outside Virtual Private Gateway created earlier. For Interface 1 IP address, I provide the respective IP from AWS for the second tunnel. I will not show this part here for simplicity. 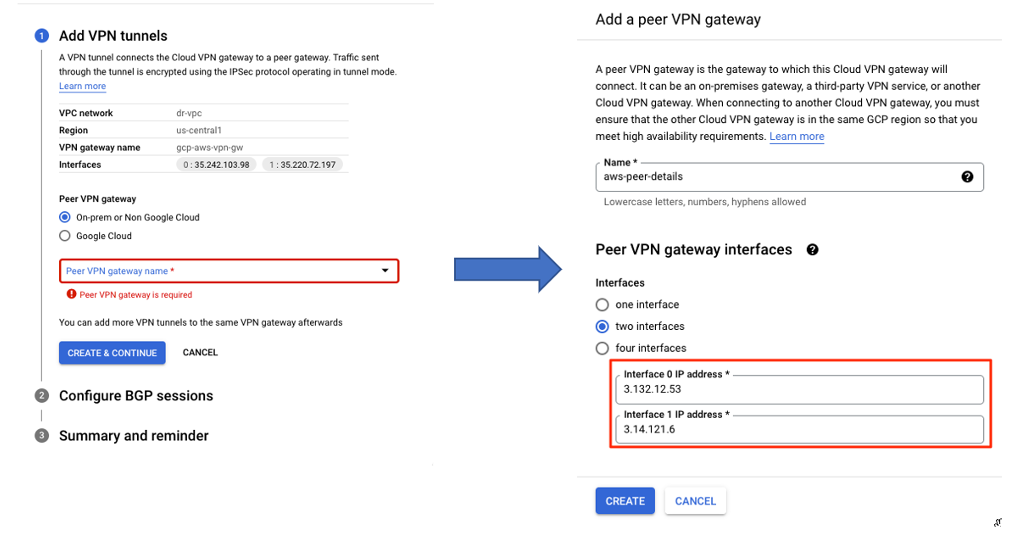 Next, I select ADD VPN TUNNEL and configure the BGP session. 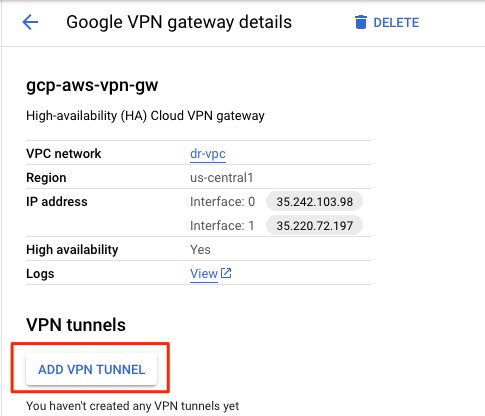 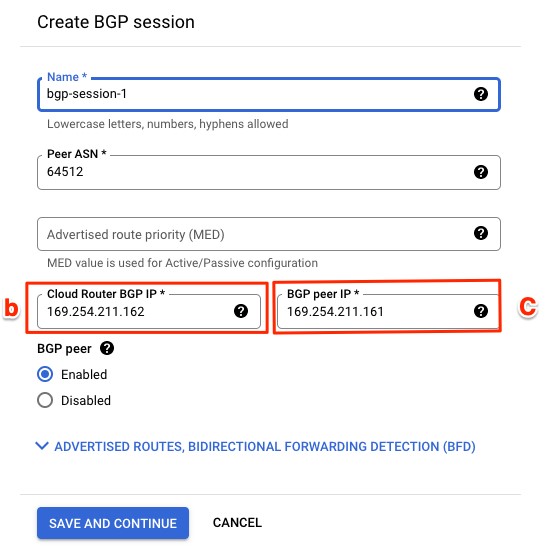 At this point, your VPN connection should show two tunnels with the status Established, and the BGP session status should be BGP established.

Go back to AWS and verify that the VPN tunnel is showing up as well.

Before I start installing the AWS Replication Agent to replicate source servers, I must allow two required TCP ports (1500 and 443) from GCP to AWS. TCP 443 is required to connect source servers to AWS DRS endpoint, us-east-2.amazonaws.com, in this example. TCP 1500 is used for replicating data from GCP to AWS. The servers on the GCP side also must have access to Amazon Simple Storage Service (S3) URLs, which are required for downloading the AWS DRS Agent software. The following diagrams show the networking requirements. Refer to Performing a Failback for more details. 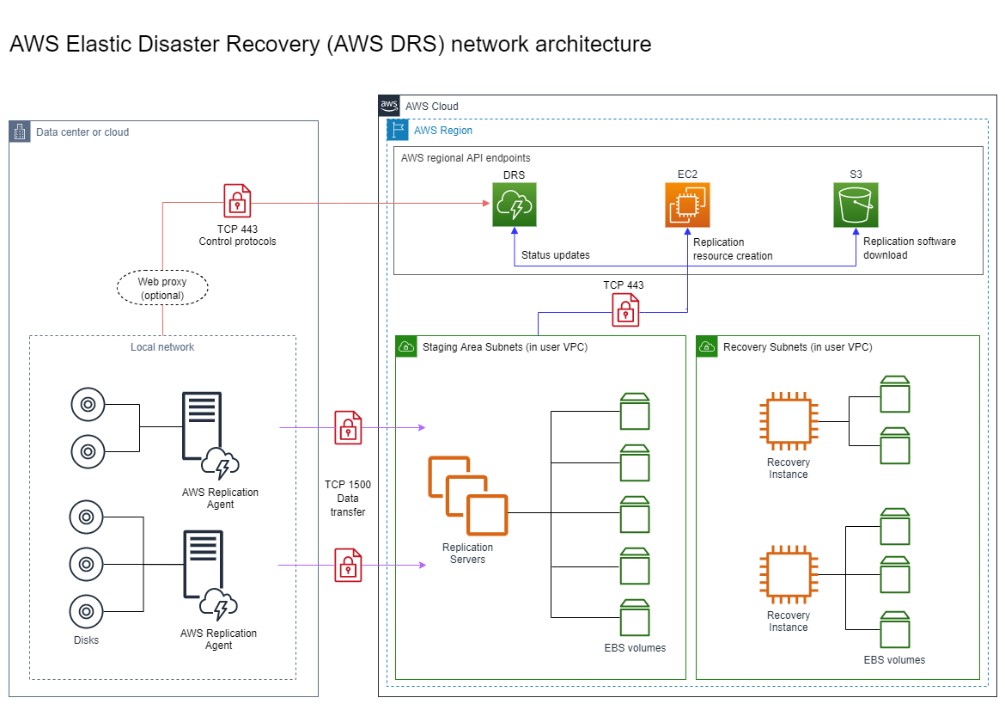 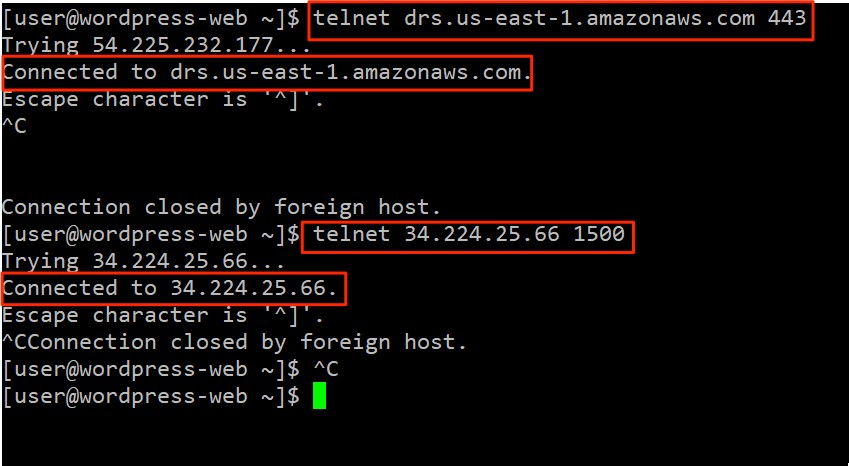 a. Create an AWS Identity and Access Management (IAM) user on AWS for AWS DRS.
b. Install AWS Replication Agent on the source environment on GCP.
c. Configure launch settings on AWS DRS.
d. Prepare for failover and then perform the failover.

a. Create an AWS Identity and Access Management (IAM) user on AWS for AWS DRS

Follow the steps in AWS Replication Agent installation instructions to create IAM credentials that AWS DRS will use to interact with your AWS account. I created a user (drs-agent-user). Take a note of the credentials created as I use them in the next step.

b. Install AWS Replication Agent on the source environment on GCP

Now you can start to install the AWS Replication Agent and start the replication to AWS. Use the following command to download the Agent and then install it on the source VM. Repeat that on each VM in the source environment on GCP.

The Agent installation prompts me to enter the name of the recovery Region (us-east-1), the AWS Access Key ID, and AWS Secret Access Key. The Agent uses the credentials to authenticate with AWS DRS service. If it succeeds, it creates a source server on the AWS DRS console and returns a server ID. The replication will start soon after.

In this step, create and configure an Amazon Elastic Compute Cloud (EC2) launch template, which is required to configure the target instance we launch for a Drill/Disaster. Failure to select the right setup may cause the replication instance or the Drill/Recovery instances not to start properly on AWS, so make sure you select the right combination. Refer to the EC2 Launch Template for a full example of setting up a launch template in AWS DRS.

d. Prepare for failover and perform the failover

Once the replication has finished and is reported healthy on AWS DRS dashboard, you’re ready to start testing your recovery instances on AWS. In order to prepare for failover, you must perform continuous drills to make sure all of your network and application settings are properly configured. Performing drills is a nondisruptive operation and is a key aspect of being prepared for an outage.

To initiate a Drill, verify that the source server shows Ready in the Ready for recovery column and Healthy under Data replication status. Then select Initiate drill from the Initiate recovery job menu.

Select the point of time that you want to recover from. AWS DRS supports going back 365 days. This number is set to 7 days by default. Note that there is increased cost when you keep the snapshot longer. For this demo, I select Use most recent data, which is a final snapshot AWS DRS takes of the source server after you initiate the recovery. This gives me a Recovery Point Objective (RPO) of seconds. 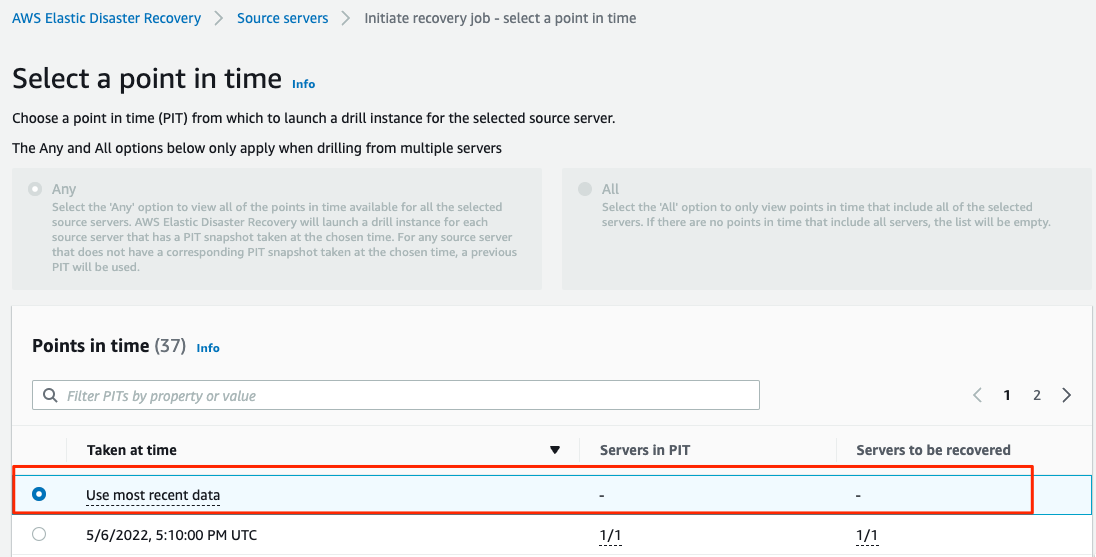 The Last recovery result column shows the status of the Recovery launch and the time of the launch. A successful Drill instance launch shows a Successful status. A launch that is still in progress shows a Pending status.

A failover is the redirection of the traffic from a primary site to a secondary site. In this case, failover is from GCP to AWS. After you verify that drill instances are working as expected, you initiate a recovery instance by selecting Initiate recovery from the Initiate recovery job menu. The steps and considerations to initiate a recovery instance are the same as in initiating a drill instance.

At this point, you are still connecting to the primary site: GCP. As a last step in the failover process, switch user traffic from GCP to AWS. This is outside of AWS DRS and is typically achieved by changing the DNS record to point to the new healthy site: AWS.

The steps to change the DNS record to point to the healthy site are dependent on the DNS provider you use for the primary workload. Here are a few options to consider:

The main components that affect your pricing in this demo are the following:

Refer to the AWS DRS pricing page for details.

Having a DR solution in place is an important part of your business continuity strategy. In this blog post, I walked you through a sample DR solution for an application hosted on GCP (primary site) with AWS as the disaster recovery site. The post showed you how to establish the networking between the two clouds using a VPN connection. It also showed how to replicate the primary servers on GCP to the recovery site on AWS using AWS DRS. I discussed the preparation for failover (setting up launch templates and performing continuous drills) and some considerations for the final cutover by changing the DNS.

In part 2 of this blog series, learn how to revert the replication back from AWS to GCP after completing a DR exercise or after the outage on the primary site is addressed. If you have any comments or questions, feel free to leave them in the comments section.