In our first blog of this series, we covered using an IoT device to store the sensor data on an Amazon EC2 instance running on AWS Snowcone. That use case covered collecting data from sensors in locations such as a factory floor or a mine with austere network connectivity.

There are other instances where you use a sensor for predictive maintenance such as in the case with farm or industrial equipment. You can use the sensor to detect when supplies are low or components are due for replacement. The sensor can trigger a notification that you can use for scheduling maintenance.

In this blog, we explore how to send the sensor data to the cloud and perform event-driven workflows as mentioned using AWS IoT Greengrass. We also explore how the incoming data can be persistently stored on a local AWS Snowcone device or used for running inference. For the use case in this post, you need connectivity to the cloud.

The following architecture diagram illustrates the on-premises sensor with AWS IoT. The ESP32 sensor connects to the internet through a wireless router. The communication is secured using the AWS IoT framework.

First, we configure the ESP32-based sensor button to work with the AWS IoT framework. This includes creating the necessary roles, certificates, and enabling access to AWS IoT Core.

Set up an Amazon SNS notification

In this section, you make the button press event trigger an Amazon SNS notification to the end user. 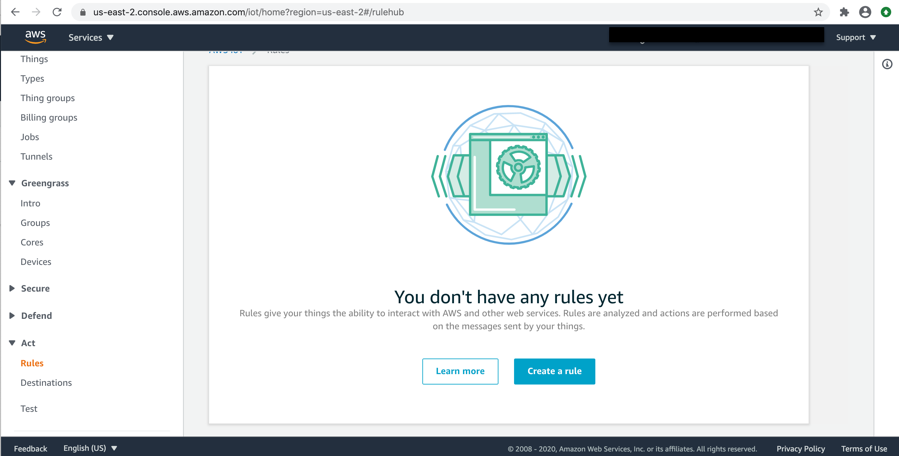 Download the software, certificates, and configuration files from the links as shown in the following screenshot:

If you deploy the AWS IoT Greengrass software on the local Snowcone based EC2 instance, you can extend AWS Lambda functions to the edge. This means that based on the triggers, such as pressing the button, you can process the incoming data or store it. In this case, we store the data using a Lambda call.

Check your log file /greengrass/ggc/var/log/system/runtime.log for any startup or runtime issues. This log is critical in troubleshooting configuration issues.

In this section, we add the sensor to the IoT framework and then create an AWS Lambda function.

You trigger this code when the IoT button is pressed.

Add the Lambda function to the AWS IoT Greengrass group

In the following section, you deploy the Lambda function that you created earlier to the AWS IoT Core. 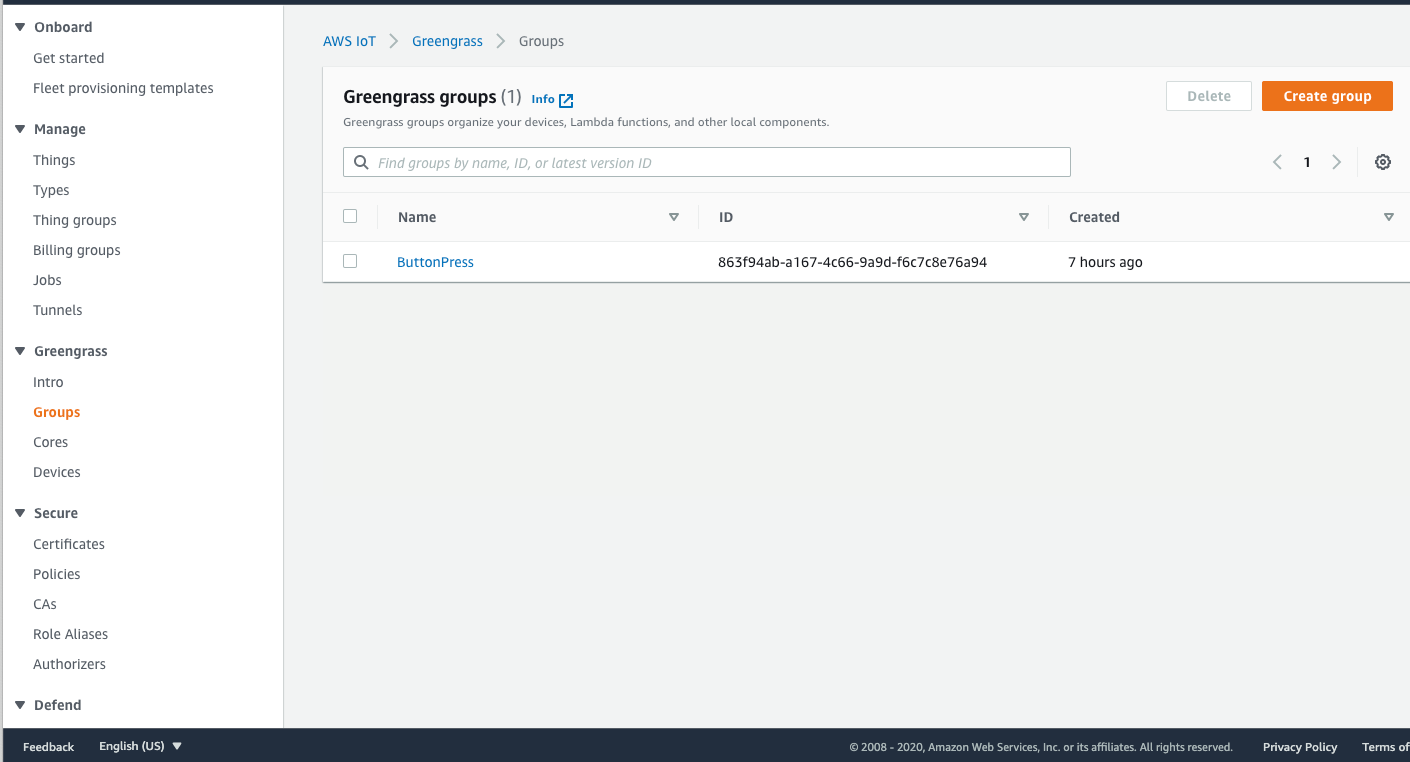 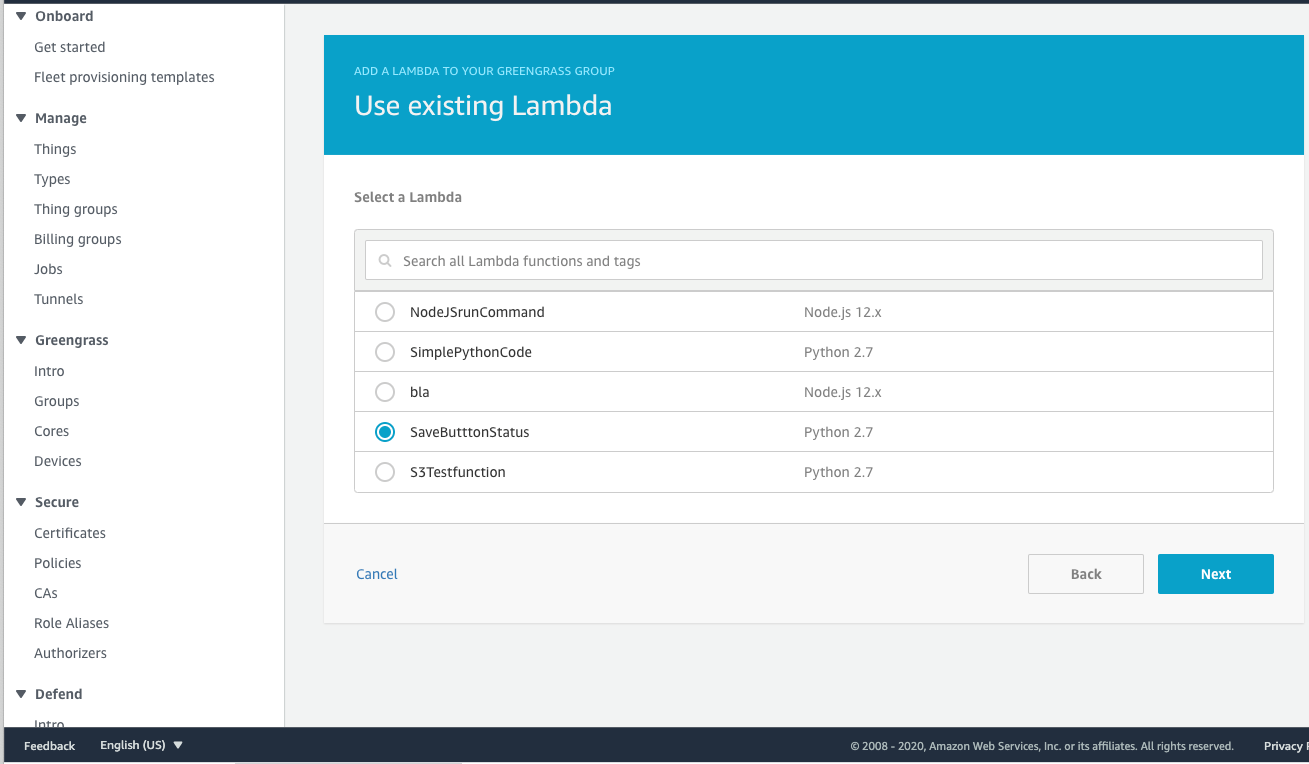 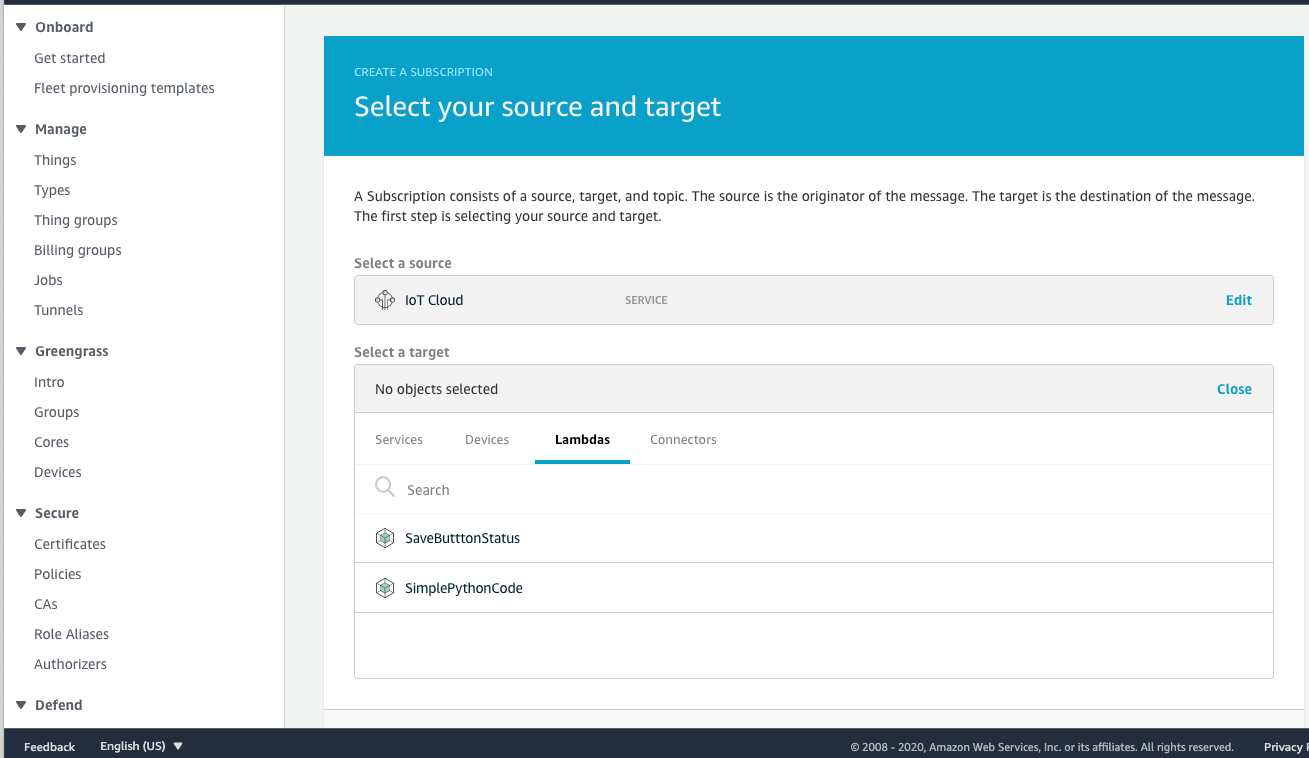 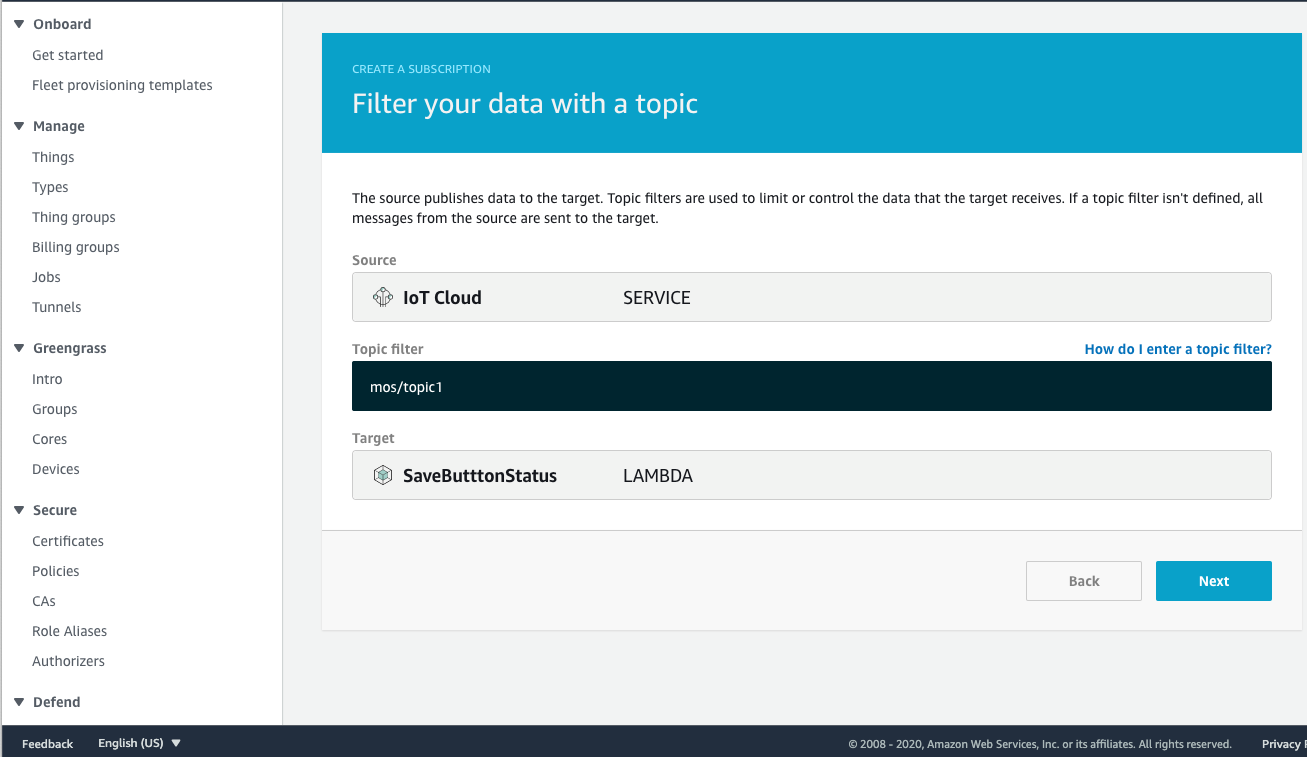 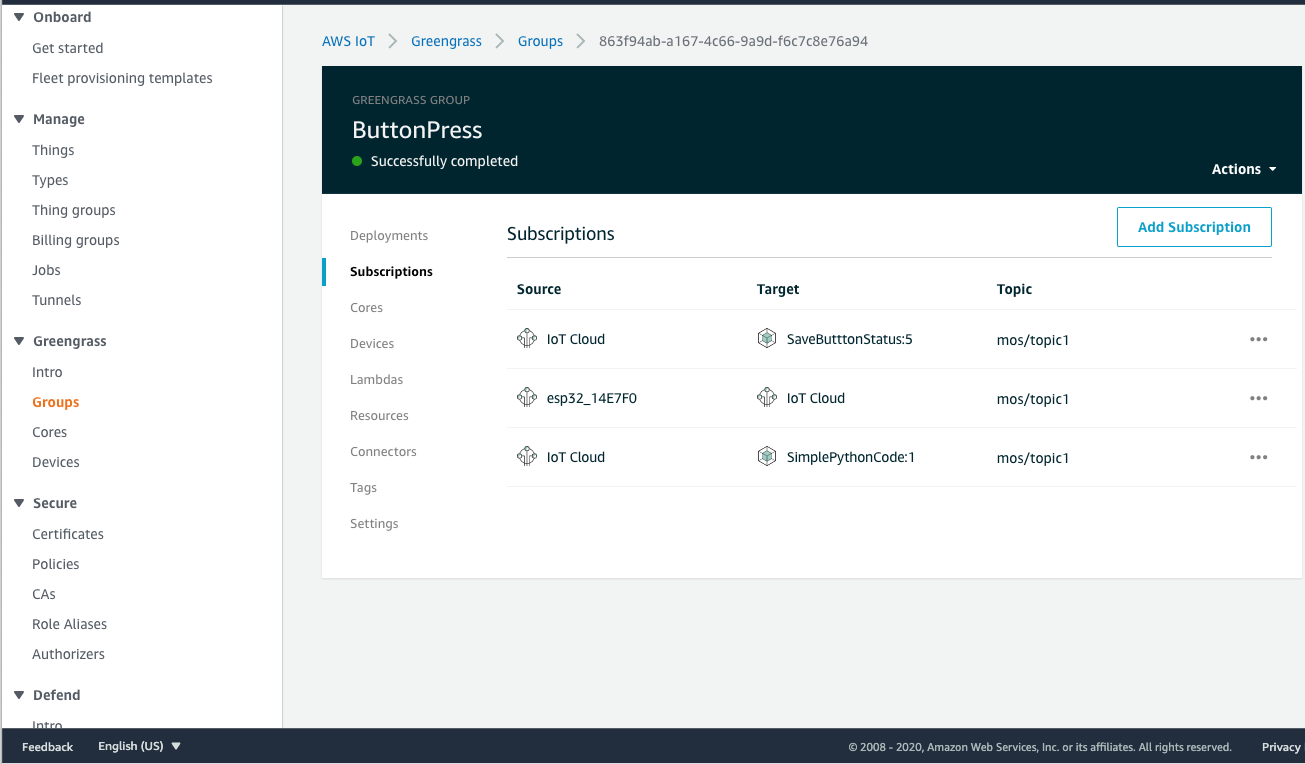 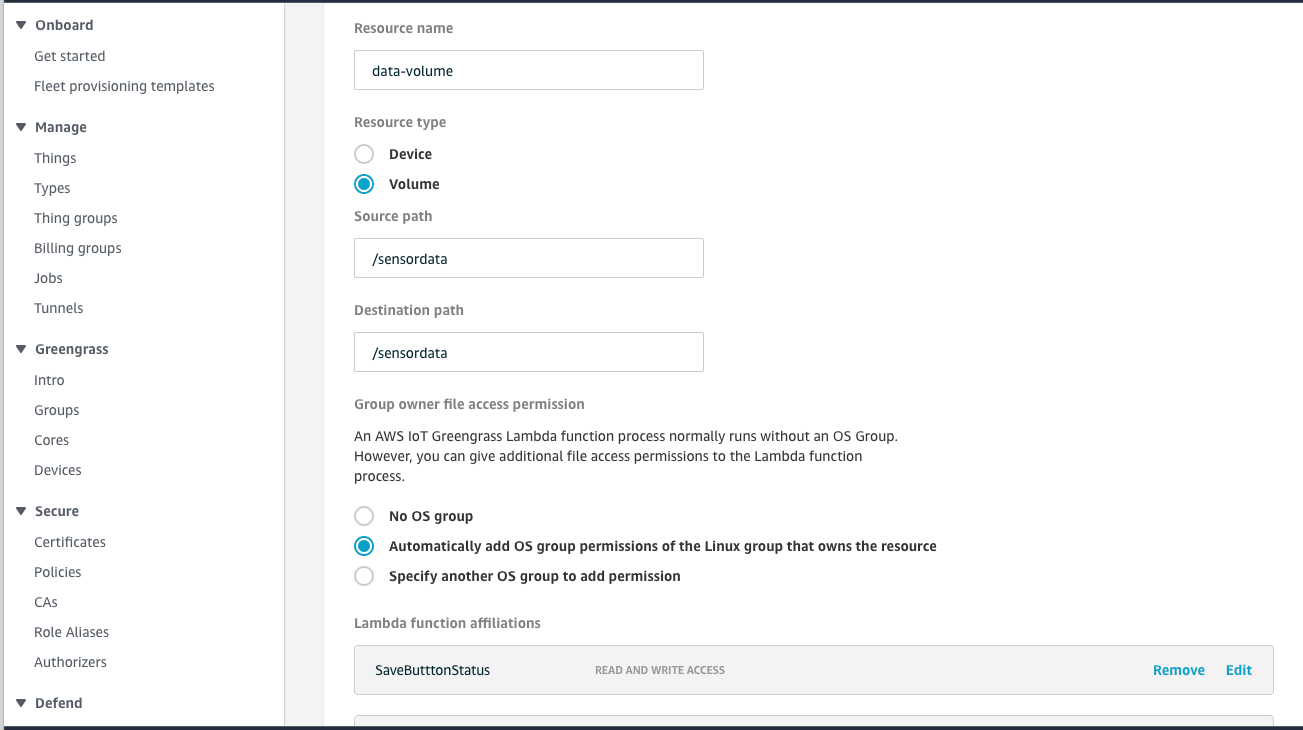 Now, you have added a data volume on the Amazon EC2 instance that the AWS Lambda function uses to write files: 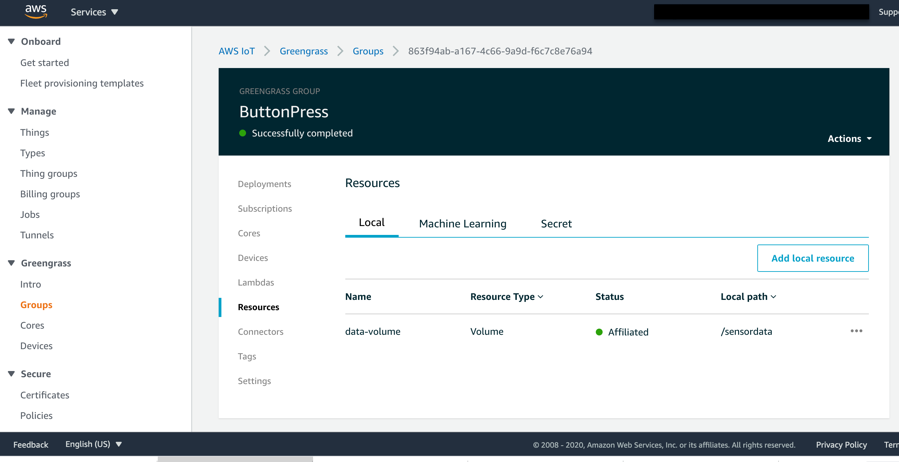 In this section, you verify the end-to-end solution. You receive a notification and also see the data is persisted on the EBS volume attached to the Snowcone-based EC2 instance.

When you are done with the resources you created using AWS IoT Core and AWS Lambda, you may want to clean them up to avoid incurring unwanted future charges. Remember to delete unwanted resources and disable permissions that are no longer required. For the EC2 instance on your AWS Snowcone, consider terminating the EC2 instance to free up CPU and memory resources on the the device. If you are done working with the AWS Snowcone, you should return it to AWS and avoid incurring additional extra-day fees. To return the AWS Snowcone, disconnect it from your USB-C power supply, and the E Ink display will change to show the courier shipment return label. You can contact the courier to pick up the AWS Snowcone, or drop it off at a courier drop-off location.

In this second blog of our two-part series, we simplified the IoT-based sensor network workflow with AWS IoT Greengrass, and we also secured the entire application using AWS services. The management, build, and deployment of your software is all performed using AWS IoT Greengrass.

We demonstrated how AWS IoT Greengrass, AWS Lambda, Amazon EC2, and Amazon EBS can be leveraged for implementing a sensor triggered workflow that you can use for event-driven predictive maintenance. This automation improves your operational efficiency. We used ESP32 and Mongoose OS to build a simple sensor workflow. Then, we showed you how to use AWS IoT Greengrass to secure and simplify the complex DIY solution. As you can see, AWS Snowcone can be leveraged to build your IoT applications at the edge while providing you with a compute and persistent storage solution.