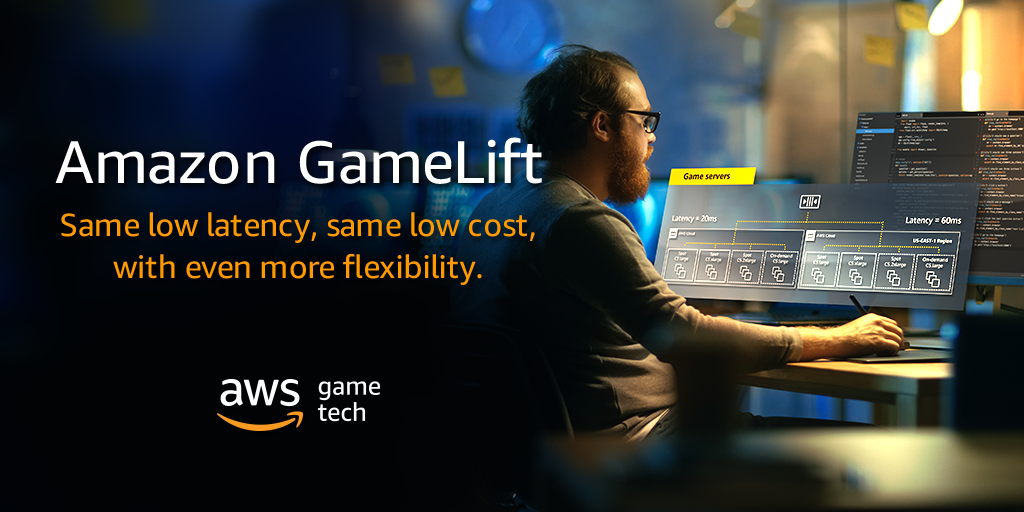 Today, we’re excited to release an update that greatly enhances the flexibility in how game developers can adopt and use GameLift. Available now in preview, the updated GameLift FleetIQ feature allows you to onboard server workloads to the cloud at your own pace, using your own tools, and independent of adopting any other managed GameLift features. What’s not changing is the ability to do this while experiencing up to 70% cost-savings compared to existing on-premises deployments. Gradually move your existing or new games to the cloud with all the benefits of EC2 Spot instances and GameLift Fleet IQ’s session reliability management. Save on cost, speed your time to market, and deliver a reliable player experience. Let’s dig in.

Launch dedicated, low-cost game servers with the flexibility to adopt the cloud at your own pace

Last year we asked customers what would make GameLift an even better alternative to on-premises deployments. Cost-savings and low latency were already a given—but increased flexibility was a common theme. Specifically, they wanted the ability to use existing tools without GameLift’s game server management layer and more control in moving game sessions to the cloud. Now, developers can access GameLift FleetIQ independent of other GameLift features and can migrate live games to the cloud, partially or completely, using existing tools and software.

While FleetIQ’s algorithm has always predicted in real-time which EC2 Spot instances are best suited to host new game sessions, with this update developers can provision those EC2 instance types into Auto Scaling Groups that sit alongside existing on-premises game server capacity. This provides more control and flexibility, while continuing to direct players onto instances less likely to have game session interruptions. Since instances run in developers’ accounts, they also have the flexibility to use containers or integrate instances with other AWS services such as AWS Shield and Amazon Elastic Container Service. With GameLift FleetIQ support for 40 instance types and 15 regions, developers can pick the instance types and geographies best-suited for their game. Check out the GameLift FleetIQ documentation here.

Some of the world’s most successful game companies already trust GameLift for their games, including Ubisoft (For Honor) and Behaviour Interactive (Dead by Daylight).

As Laurent Chouinard, Online Programming Lead at Ubisoft notes, “Ubisoft is committed to enriching players’ lives with original and memorable game experiences. On For Honor, using Amazon GameLift cloud game servers enables us to uphold this commitment. With FleetIQ Spot instances, we are able to provide seamless and scalable player experiences.”

These are just a few GameLift customers today, and we’re excited to share more stories about the impact of GameLift FleetIQ throughout the year.

When using GameLift FleetIQ in preview, developers will only pay for EC2 usage and any data transfer. General availability for the GameLift FleetIQ update will come later this year with standard GameLift pricing applying at that time. Of course, developers can continue to access the full suite of GameLift features (e.g., FlexMatch, integrated FleetIQ, fleet management) as they always have with standard GameLift pricing and terms.

This is just the start

This update is the first of several customer requests we have on the horizon this year, and we couldn’t be more excited. So stay tuned. In the meantime, we would love to hear from you. Let us know what you think about this update and what features you’d like to see in the future. Connect with us on the forums or through the usual social media channels.

Learn how to get started »