Customers operating in hybrid environments today face tremendous challenges with regard to operational management, security/compliance, and monitoring. Systems administrators have to connect, monitor, patch, and automate across multiple Operating Systems (OS), applications, cloud, and on-premises infrastructure. Each of these scenarios has its own unique vendor and console purpose-built for a specific use case.

Using Hybrid Activations, a capability within AWS Systems Manager, you can manage resources irrespective of where they are hosted. You can securely initiate remote shell connections, automate patch management, and monitor critical metrics. You’re able to gain visibility into networking information and application installations via a single console.

In this post, we’ll discuss how the Session Manager and Patch Manager capabilities of Systems Manager allow you to securely connect to instances and virtual machines (VMs). You can centrally log session activity for later auditing and automate patch management, across both cloud and on-premises environments, within a single interface.

The session is launched using the default system generated ssm-user account. With this account, the system does not prompt for a password when initiating root level commands. To improve security, OS accounts can be used to launch sessions using the Run As feature of Session Manager.

A session initiated via Session Manager is secure. The data exchange between the client and a managed instance takes place over a secure channel using TLS 1.2. To further improve your security posture, AWS Key Management Service (KMS) encryption can be used to encrypt the session traffic between a client and a managed instance. Encrypting session data with a customer managed key enables sessions to handle confidential data interactions. For using KMS encryption, both the user who starts sessions and the managed instance that they connect to, must have permission to use the key. Step-by-step instructions on how to set this up can be found in the Session Manager documentation.

Session Manager integrates with AWS CloudTrail, and this enables security teams to track when a user starts and shuts down sessions. Session Manager can also centrally log all session activity in Amazon CloudWatch or Amazon Simple Storage Service (S3). This gives system administrators the ability to manage details, such as when the session started, what commands were typed during the session, and when it ended. To configure session manager to send logs to CloudWatch and Amazon S3, the instance profile attached to the instance must have permissions to write to CloudWatch and S3. For the Amazon EC2 instance, this will be the IAM role attached to the instance. For VMs running on VMware Cloud on AWS, or on-premises, this is the IAM role from the “Hybrid Activations” page.

Following, we show an example of a session run on an on-premises instance via Session Manager and the corresponding logs in CloudWatch. The logs are continuously streamed into CloudWatch.

The following screenshot displays the ipconfig /all command being run remotely within PowerShell of an instance running within VMware Cloud on AWS via Session Manager: 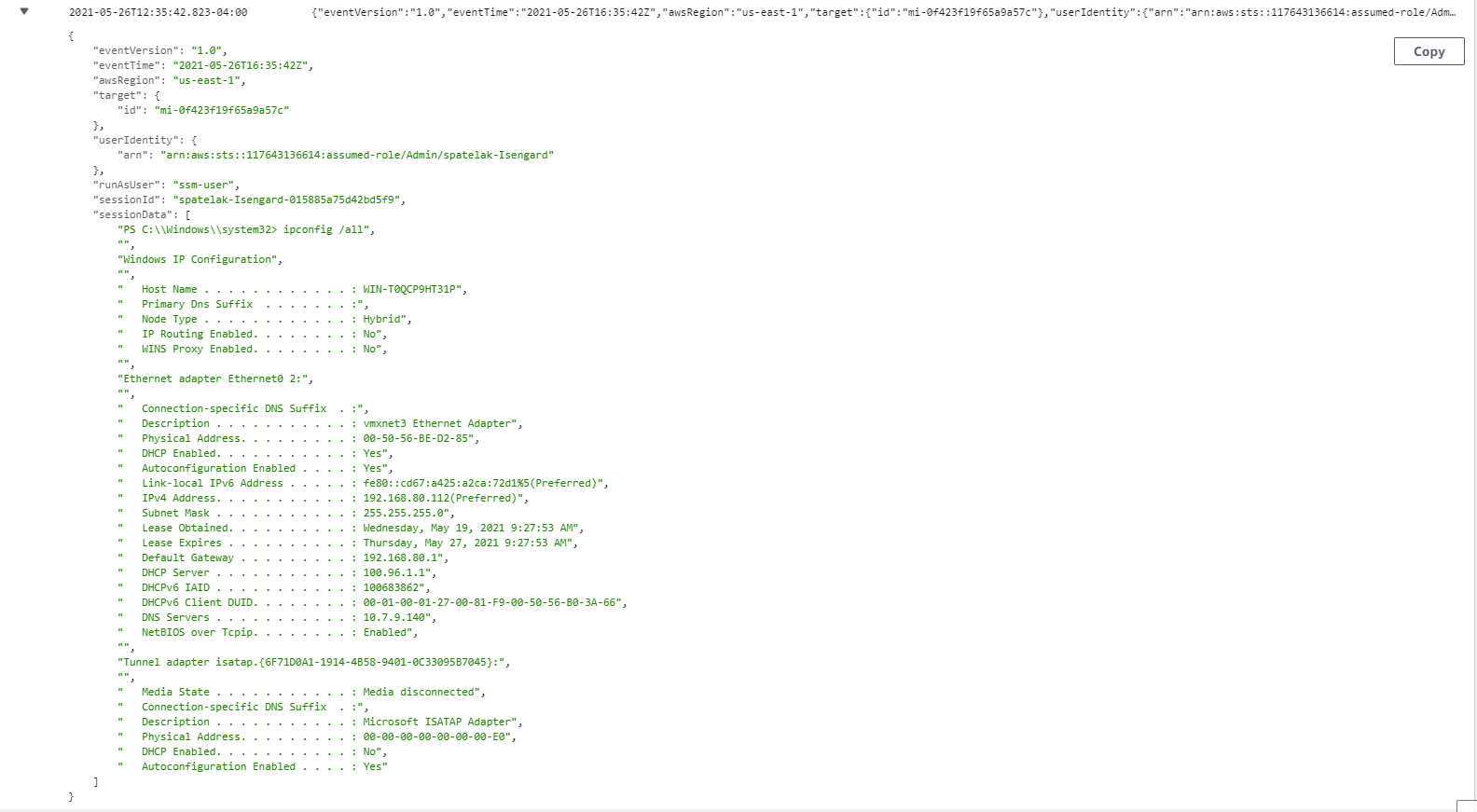 Patch management is vital in maintaining a secure and compliant environment. Patch Manager, a capability of AWS Systems Manager, helps you monitor, select, and deploy operating system and software patches automatically. This can happen across compute running on Amazon EC2, VMware on-premises, or VMware Cloud on AWS instances. 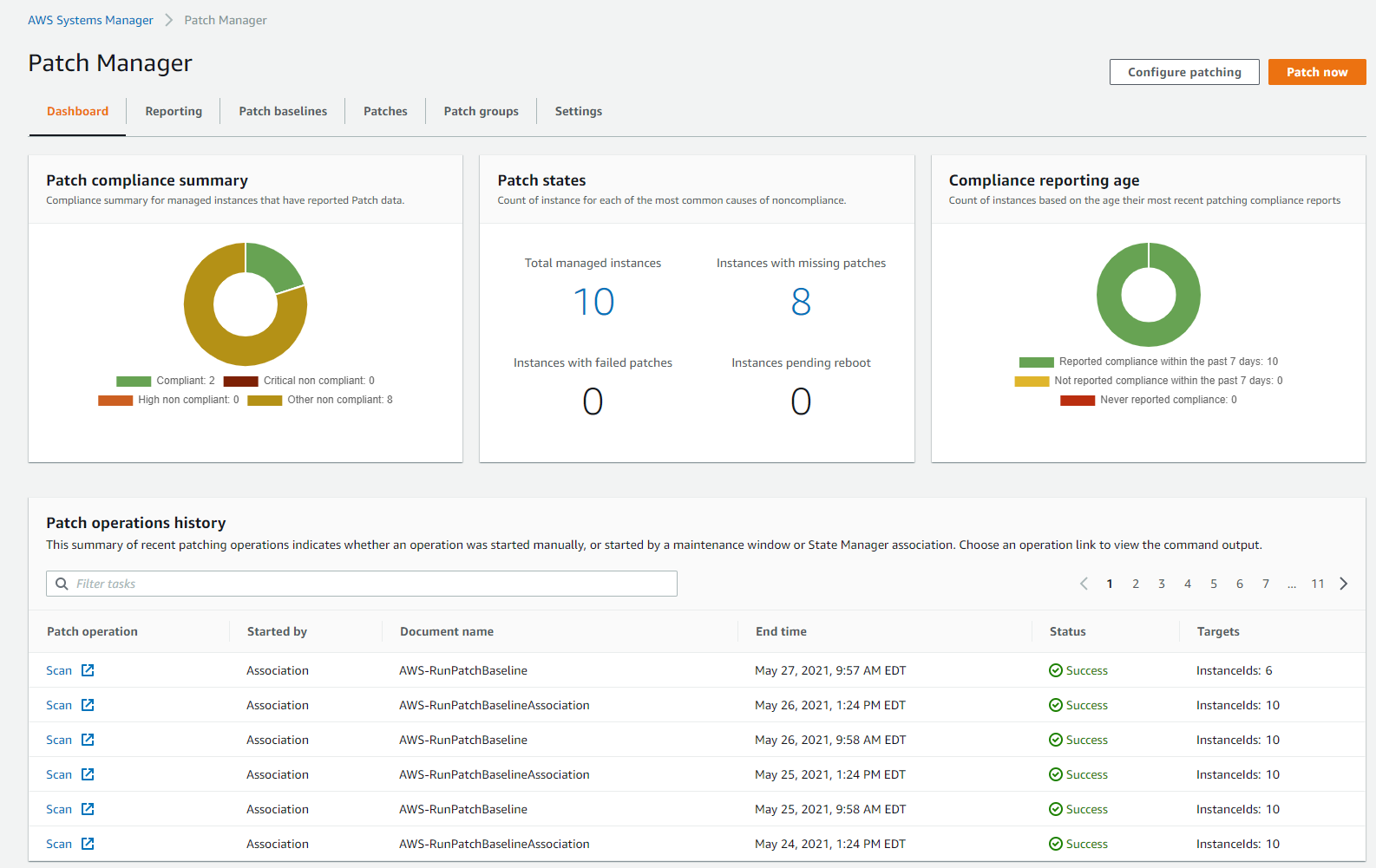 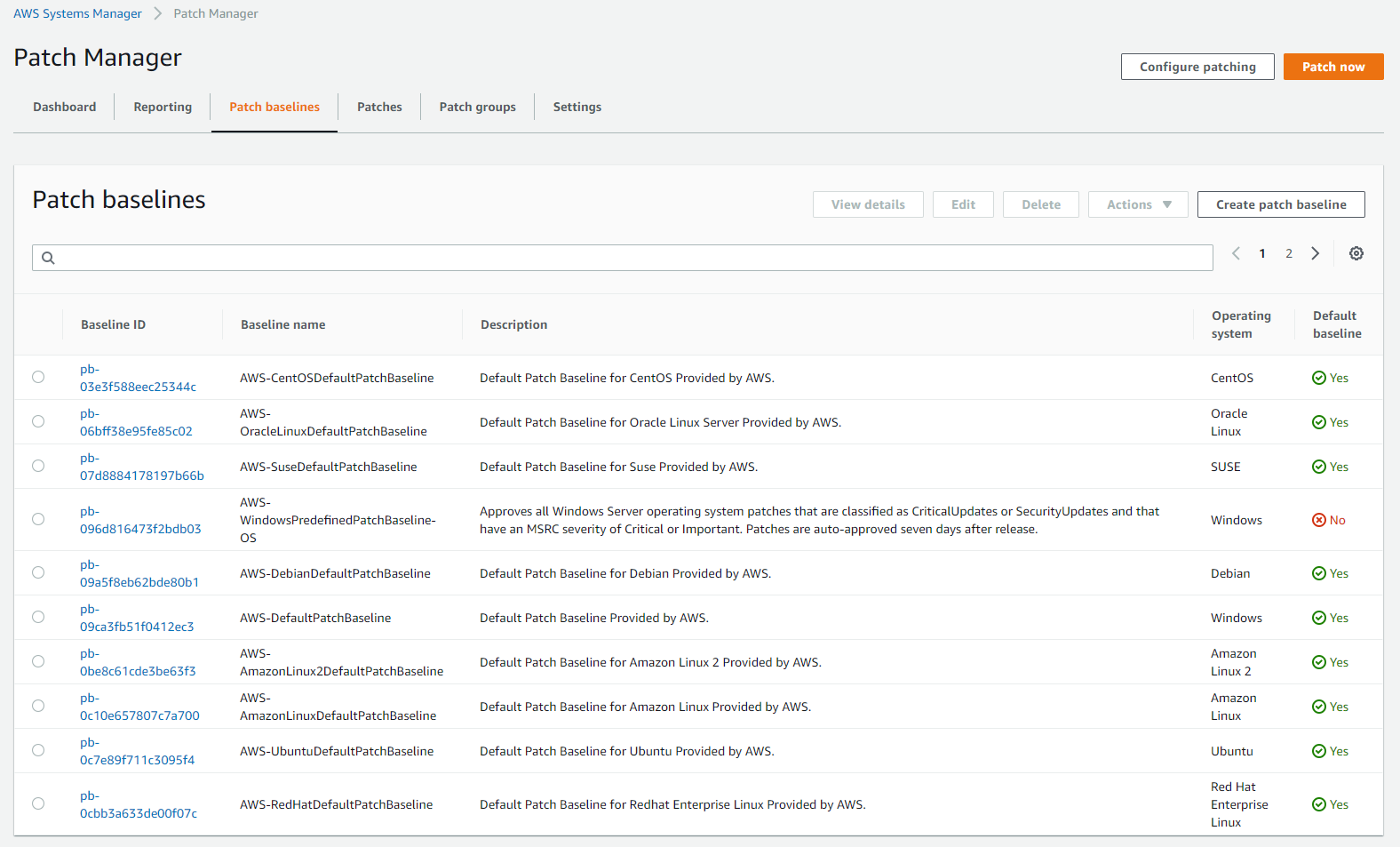 You can use a patch group to associate a group of instances with a specific patch baseline in Patch Manager. This ensures that you are deploying the appropriate patches with associated patch baseline rules, to the correct set of instances. These instances can be EC2, VMware on-premises, or VMware Cloud on AWS. You can also use patch groups to schedule patching during a specific maintenance window.

Patch Manager also provides the ability to scan your instances and VMs running within VMware on-premises and/or VMware Cloud on AWS. It can report compliance adherence based on pre-defined schedules. Patch compliance reports can also be saved to an Amazon S3 bucket of your choice and generated as needed. For reports on a single instance/VM, detailed patch data will be included. For reports run on all instances, a summary of missing patch data will be provided.

The Patch Manager feature of AWS Systems Manager also integrates with AWS Security Hub, a service providing a comprehensive view of your security alerts. It additionally offers security check automation capabilities. In the following image, we show non-compliant instances and servers being reported within AWS Security Hub across EC2, VMware on-premises, and VMware Cloud on AWS: 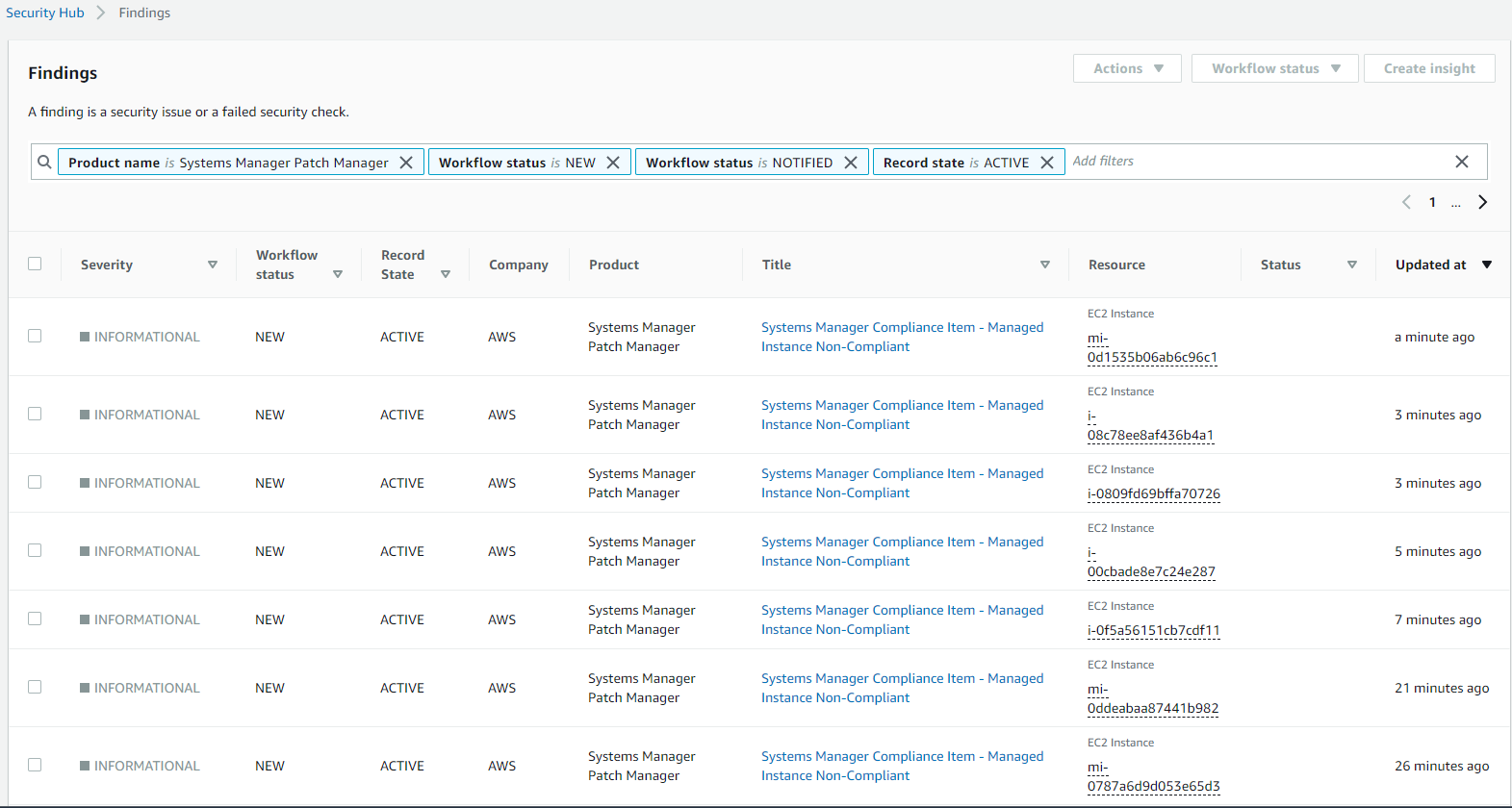 To ease installation and deployment efforts, the SSM agent is pre-installed on instances created from the following Amazon Machine Images (AMIs):

For other AMI’s and VMs within VMware on-premises and/or VMware Cloud on AWS, manual agent installation must be performed.

Below is an architecture diagram of our solution described in this post: 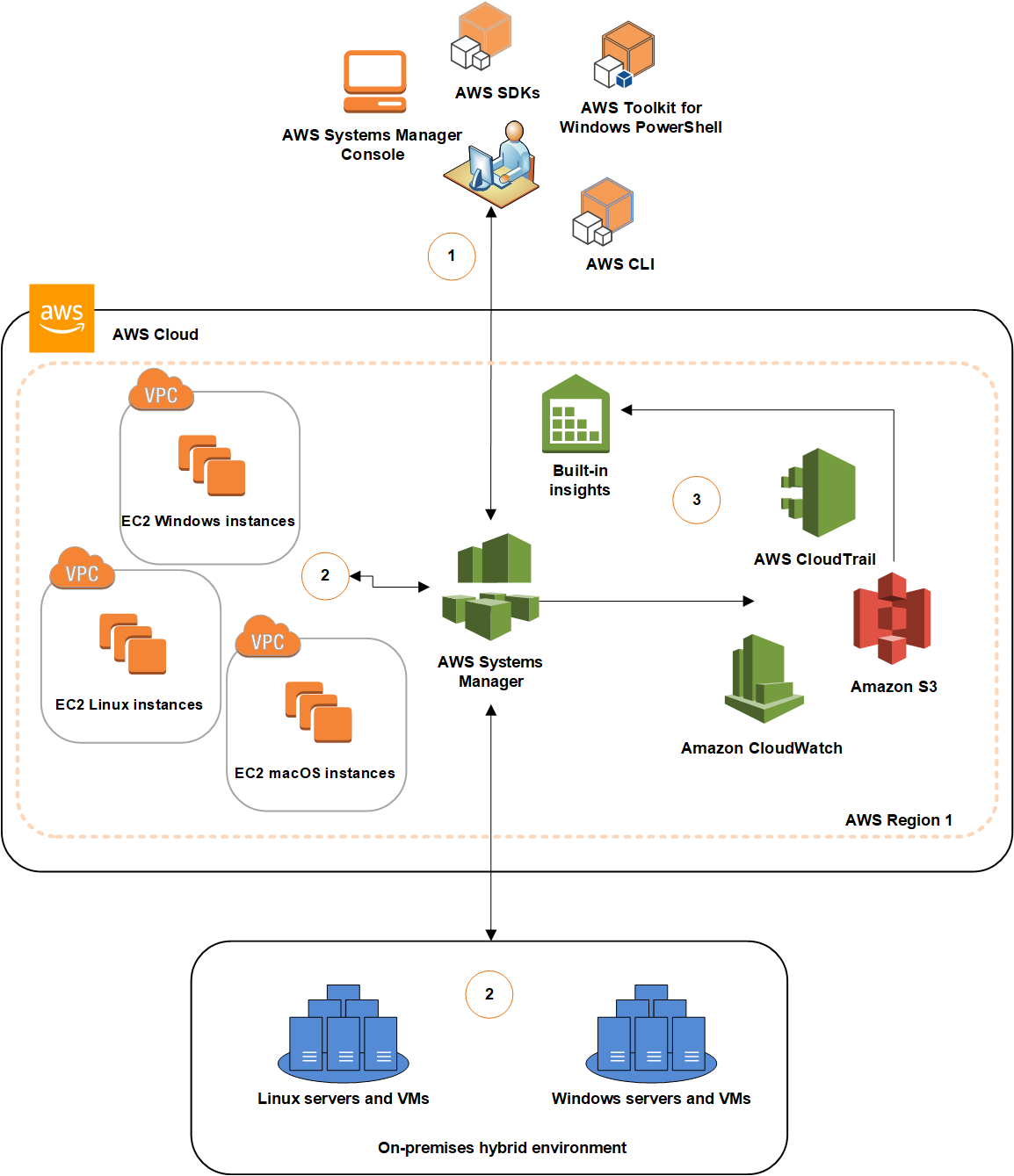 In this post, we showcase how AWS Systems Manager can yield a unified view within your hybrid environments. It spans native AWS, VMware on-premises, and VMware Cloud on AWS. The Session Manager and Patch Manager features simplify instance connectivity and patch management. Other native capabilities of AWS Systems Manager allow application and change management, software inventory, remote initiation, and monitoring. We encourage you to use the features discussed in this post to maintain your servers across your hybrid environment.