This is a customer post by Ajay Rathod, a Staff Data Engineer at Realtor.com.

Realtor.com, in their own words: Realtor.com®, operated by Move, Inc., is a trusted resource for home buyers, sellers, and dreamers. It offers the most comprehensive database of for-sale properties, among competing national sites, and the information, tools, and professional expertise to help people move confidently through every step of their home journey.

Move, Inc. processes hundreds of terabytes of data partitioned by day and hour. Various teams run hundreds of queries on this data. Using AWS services, Move, Inc. has built an infrastructure for gathering and analyzing data:

This architecture is known as the data platform and is shared by the data science, data engineering, and the data operations teams within the organization. Move, Inc. also enables other cross-functional teams to use Athena. When many users use Athena, it helps to monitor its usage to ensure cost-effectiveness. This leads to a strong need for Athena metrics that can give details about the following:

Currently, the Move, Inc. team does not have an easy way of obtaining all these metrics from a single tool. Having a way to do this would greatly simplify monitoring efforts. For example, the data operations team wants to collect several metrics every day obtained from queries run on Athena for their data. They require the following metrics:

In this post, I discuss how to build a solution for monitoring Athena usage. To build this solution, you rely on AWS CloudTrail. CloudTrail is a web service that records AWS API calls for your AWS account and delivers log files to an S3 bucket.

Here is the high-level overview:

The architecture of this solution is shown in the following diagram. 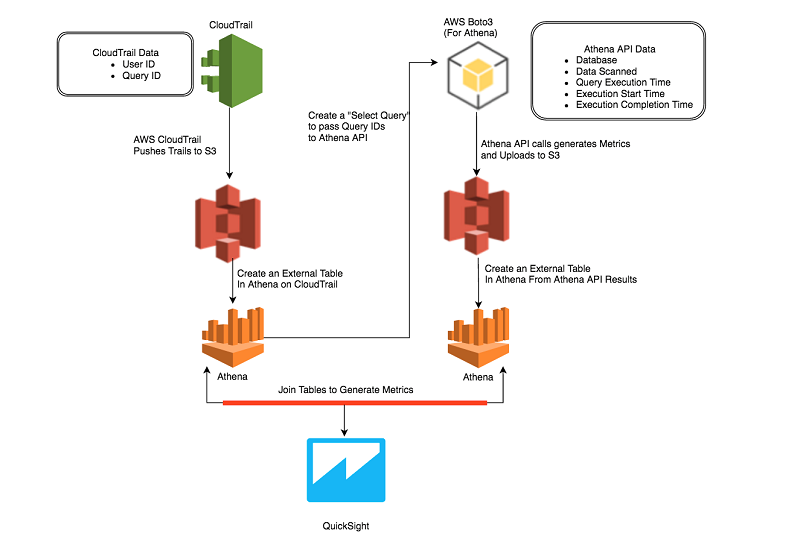 Take a look at this solution step by step.

This solution uses CloudTrail, Athena, and S3. Make sure that the users who run the following scripts and steps have the appropriate IAM roles and policies. For more information, see Tutorial: Delegate Access Across AWS Accounts Using IAM Roles.

Step 1: Create a table in Athena for data in CloudTrail

The CloudTrail API records all Athena queries run by different teams within the organization. These logs are saved in S3. The fields of most interest are:

When end users make queries in Athena, these queries are recorded by CloudTrail as responses from Athena web service calls. In these responses, each query is represented as a JSON (JavaScript Object Notation) string.

You can use the following CREATE TABLE statement to create the cloudtrail_logs table in Athena. For more information, see Querying CloudTrail Logs in the Athena documentation.

Step 2: Create a table in Amazon Athena for data from API output

You can use this API call to obtain information about the Athena queries that you are interested in and store this information in an S3 location. Create an Athena table to represent this data in S3. For the purpose of this post, the response fields that are of interest are as follows:

The CREATE TABLE statement for athena_api_output, is as follows:

You can inspect the query IDs and user information for the last day. The query is as follows:

You can write a simple Python script to loop through queries in batches of 50 and query the Athena API for query statistics. You can use the Boto library for these lookups. Boto is a library that provides you with an easy way to interact with and automate your AWS development. The response from the Boto API can be parsed to extract the fields that you need as described in Step 2.

An example Python script is available in the AthenaMetrics GitHub repo.

Format these fields, for each query ID, as CSV strings and store them for the entire batch response in an S3 bucket. This S3 bucket is represented by the table created in Step 2, cloudtrail_logs.

In your Python code, create a variable named sql_query, and assign it a string representing the SQL query defined in Step 2. The s3_query_folder is the location in S3 that is used by Athena for storing results of the query. The code is as follows:

You can iterate through the results in the response object and consolidate them in batches of 50 results. For each batch, you can invoke the Athena API, batch-get-query-execution.

Store the output in the S3 location pointed to by the CREATE TABLE definition for the table athena_api_output, in Step 2. The SQL statement above returns only queries run in the last 24 hours. You may want to increase that to get usage over a longer period of time. The code snippet for this API call is as follows:

The batchqueryids value is an array of 50 query IDs extracted from the result set of the SELECT query. This script creates the data needed by your second table, athena_api_output, and you are now ready to join both tables in Athena.

Now that the two tables are available with the data that you need, you can run the following Athena query to look at the usage by user. You can limit the output of this query to the most recent five days.

Step 5: Analyze and visualize the results

In this step, using QuickSight, you can create a dashboard that shows the following metrics: 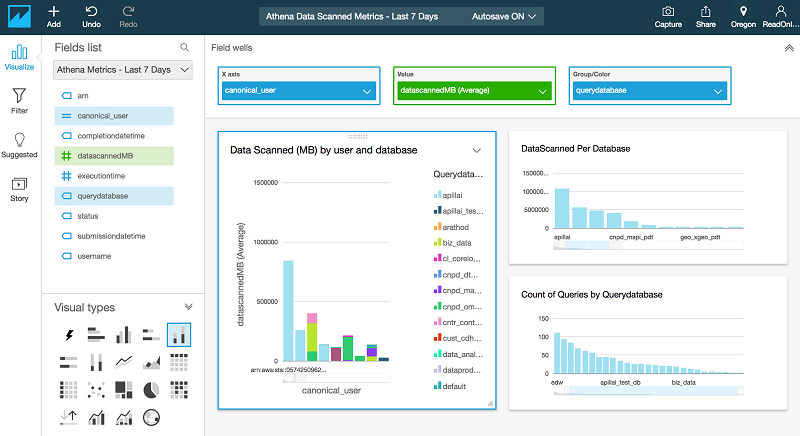 Using the solution described in this post, you can continuously monitor the usage of Athena by various teams. Taking this a step further, you can automate and set user limits for how much data the Athena users in your team can query within a given period of time. You may also choose to add notifications when the usage by a particular user crosses a specified threshold. This helps you manage costs incurred by different teams in your organization.

Realtor.com would like to acknowledge the tremendous support and guidance provided by Hemant Borole, Senior Consultant, Big Data & Analytics with AWS Professional Services in helping to author this post. 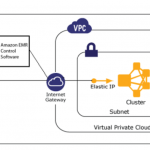 Ajay Rathod is Staff Data Engineer at Realtor.com. With a deep background in AWS Cloud Platform and Data Infrastructure, Ajay leads the Data Engineering and automation aspect of Data Operations at Realtor.com. He has designed and deployed many ETL pipelines and workflows for the Realtor Data Analytics Platform using AWS services like Data Pipeline, Athena, Batch, Glue and Boto3. He has created various operational metrics to monitor ETL Pipelines and Resource Usage.