Dream11’s journey to building their Data Highway on AWS

This is a guest post co-authored by Pradip Thoke of Dream11. In their own words, “Dream11, the flagship brand of Dream Sports, is India’s biggest fantasy sports platform, with more than 100 million users. We have infused the latest technologies of analytics, machine learning, social networks, and media technologies to enhance our users’ experience. Dream11 is the epitome of the Indian sports technology revolution.”

Since inception, Dream11 has been a data-driven sports technology brand. The systems that power Dream11, including their transactional data warehouse, run on AWS. As Dream11 hosts fantasy sports contests that are joined by millions of Indian sports fans, they have large volumes of transactional data that is organized in a well-defined Amazon Redshift data warehouse. Previously they were using 3rd party services to collect, analyze and build models over user interaction data combined with transactional data. Although this approach was convenient, it presented certain critical issues:

All these concerns and needs, led Dream11 to conclude that they needed their own centralized 360-degree analytics platform. Therefore, they embarked on the Data Highway project on AWS.

This project has additional advantages. It is increasingly becoming important to store and process data securely. Having everything in-house can help Dream11 with data security and data privacy objectives. The platform enables 360-degree customer analytics, which further allows Dream11 to do intelligent user segmentation in-house and share only those segments (without exposing underlying transactional or interactions data) with third-party messaging service providers.

Dream11 had the following design goals for the project:

In less than 3 months, Dream11’s data team built a system that met all the aforementioned goals. The following diagram shows the high-level architecture. 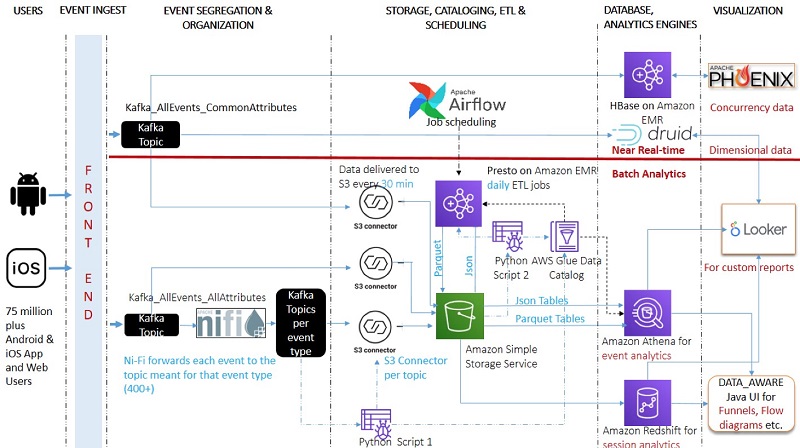 For this project, they used the following components:

The rest of this post explains the various design choices and trade-offs made by the Dream11’s data engineers.

Dream11 has several hundred event types. These events have common attributes and specific attributes. The following diagram shows the logical structure of these events.

When the front end receives an event, it saves fields up to common attributes into a message and posts it to Kafka_AllEvents_CommonAttributes. This Kafka topic is the source for the following systems:

The front end also saves events, as they are, into Kafka_AllEvents_AllAttributes. These events are further picked by Apache Ni-Fi, which forwards them to their respective topics. Apache Ni-Fi supports data routing, transformation, and system mediation logic using powerful and scalable directed graphs. Data is transformed and published to Kafka by using a combination of RouteOnAttribute and JoltTransformJSON processors (to parse JSON). Apache Ni-Fi basically reads event names and posts to the Kafka topic with matching names. If Kafka doesn’t have a topic with that name, it creates a new topic with that name. You can configure your Kafka brokers to auto-create a topic when a message is received for a non-existent topic. 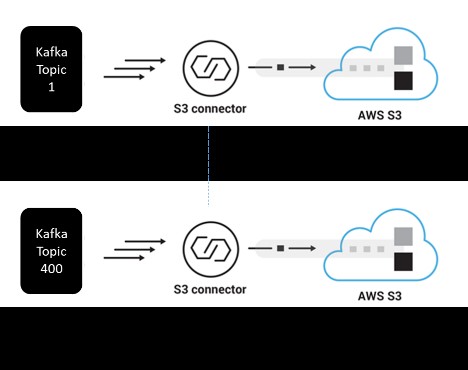 The following diagram summarizes the overall design of the system for event ingestion, segregation, and organization. 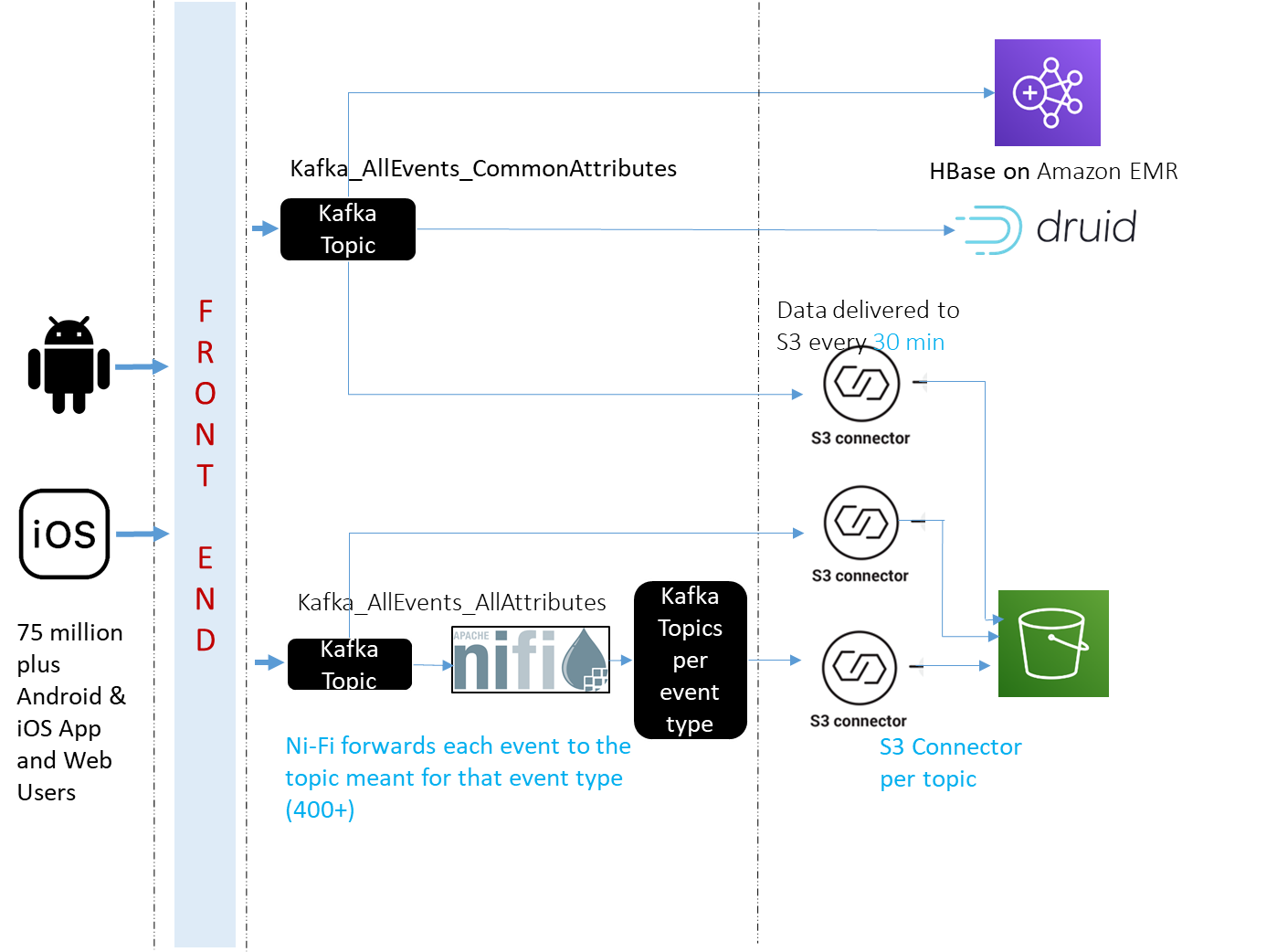 Because this Data Catalog is accessible from multiple services that were going to be used for the Data Highway project, Dream11 decided to use it to register all the table definitions.

Registering tables with AWS Glue Data Catalog is easy. You can use an AWS Glue crawler. It can infer schema from files in Amazon S3 and register a table in the Data Catalog. It works quite well, but Dream11 needed additional actions, such as automatically configuring Kafka Amazon S3 sink connectors etc. Therefore, they developed two Python based crawlers.

The first Python based crawler runs every 2 hours and looks up Kafka topics. If it finds a new topic, it configures a Kafka Amazon S3 connector sink to dump its data to Amazon S3 every 30 minutes in JSON Gzip format. It also registers a table with Glue Data Catalog so that users can query the JSON data directly, if needed.

The second Python based crawler runs once a day and registers a corresponding table for each new table created that day to hold flattened data (Parquet, Snappy). It infers schemas and registers tables with the Data Catalog using its Table API. It adds customization needed by the Dream11 team to the metadata. It then creates Amazon EMR Presto ETL jobs to convert JSON, Gzip data to Parquet, Snappy, and registers them with Apache Airflow to run every 24 hours.

Dream11 has a multi node, long-running, multi-purpose EMR cluster. They decided to run scheduled ETL jobs on it for the Data Highway project.

ETL for an event table involves a simple SELECT FROM -> INSERT INTO command to convert JSON (Gzip) to Parquet (Snappy). Converted data takes up to 70% less space, results in 10 times improvement in Athena query performance. ETL happens once a day. Tables are partitioned by day.

Data received on Kafka_AllEvents_CommonAttributes topic is loaded to Redshift. ETL involves SELECT FROM -> INSERT INTO to convert JSON (Gzip) to CSV, followed by Amazon Redshift COPY.

Apache Airflow is an open-source tool for authoring and orchestrating big data workflows. With Apache Airflow, data engineers define direct acyclic graphs (DAGs). DAGs describe how to run a workflow and are written in Python. Workflows are designed as a DAG that groups tasks that run independently. The DAG keeps track of the relationships and dependencies between tasks.

The following diagram shows the workflow to connect Apache Airflow to Amazon EMR.

The following diagram summarizes the overall design of the system for storage, cataloging, ETL, and scheduling. 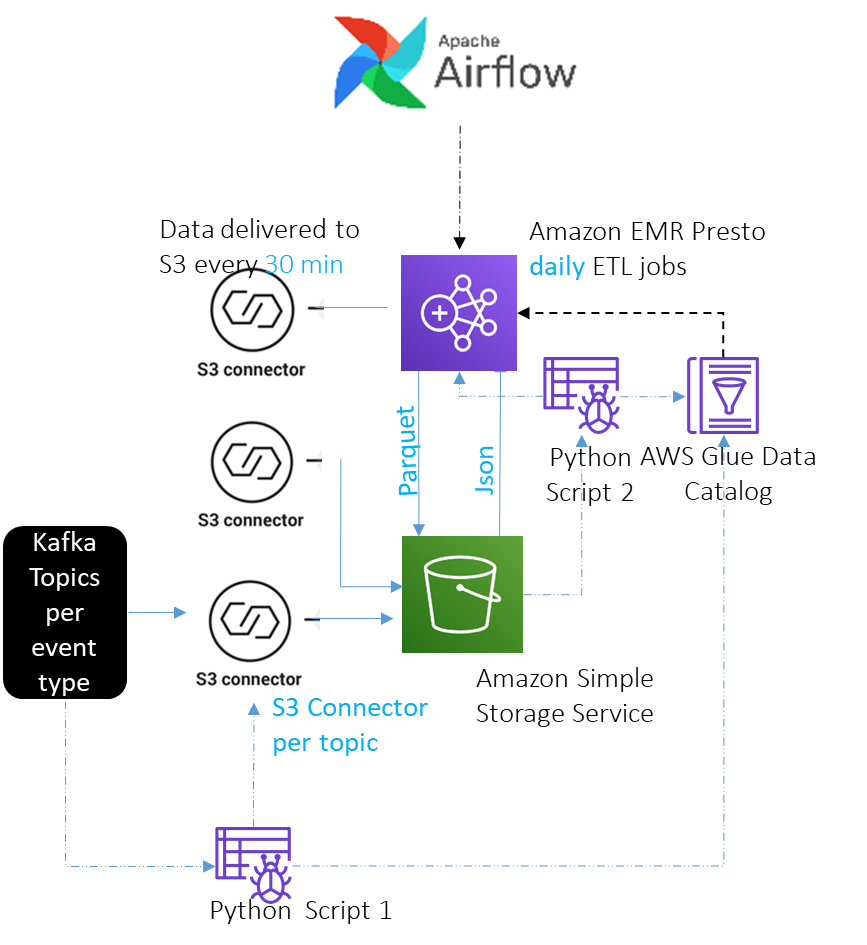 In this section, we discuss the real-time and near-real-time analytics performed on Dream11’s data.

Apache Druid is an OLAP-style data store. It computes facts and metrics against various dimensions while data is being loaded. This avoids the need to compute results when a query is run.

Dream11’s web and mobile events are loaded from the Kafka_AllEvents_CommonAttributes topic to Apache Druid with the help of the Apache Druid Kafka indexing service. Dream11 has a dashboard with different granularity levels and dimensions such as app version, org, and other dimensions present in the common event attributes list.

Dream11 also needs to identify individual active users at any given time or during a given window. This is required by other downstream teams such as the Data Science team and Digital User Engagement team.

With the help of a Java consumer, they push all events from the Kafka_AllEvents_ CommonAttributes topic to HBase on an EMR cluster with just required user dimensions. They can query the data in HBase with SQL syntax supported by the Apache Phoenix interface.

Data received on Kafka_AllEvents_CommonAttributes is loaded into Amazon S3 every 30 minutes by the associated kafka connector sink. This data is in JSON format with Gzip compression. Every 24 hours, a job runs on Amazon EMR Presto that flattens this data into CSV format. The data is loaded into Amazon Redshift with the COPY command. The data gets loaded first into a staging table. Data in the staging table is aggregated to get sessions data. Amazon Redshift already has transactional data from other tables that, combined now with the session data, allows Dream11 to perform 360-degree user analytics. They can now easily segment users based on their interactions data and transactions data. They can then run campaigns for those users with the help of messaging platforms.

With Athena, you’re charged based on the amount of data scanned by each query. You can get significant cost savings and performance gains by compressing, partitioning, or converting your data to a columnar format, because each of those operations reduces the amount of data that Athena needs to scan to run a query. For more information, see Top 10 Performance Tuning Tips for Amazon Athena.

As discussed before, Dream11 has registered over hundreds of tables for events data in JSON format, and similar number of tables for events data in Parquet format with the AWS Glue Data Catalog. They observed a performance gain of 10 times on conversion of data format to Parquet, and an 80% savings in space. Data in Amazon S3 can be queried directly through the Athena UI with SQL queries. The other option they use is connecting to Athena using a JDBC driver from Looker and their custom Java UI for the Data Aware project. 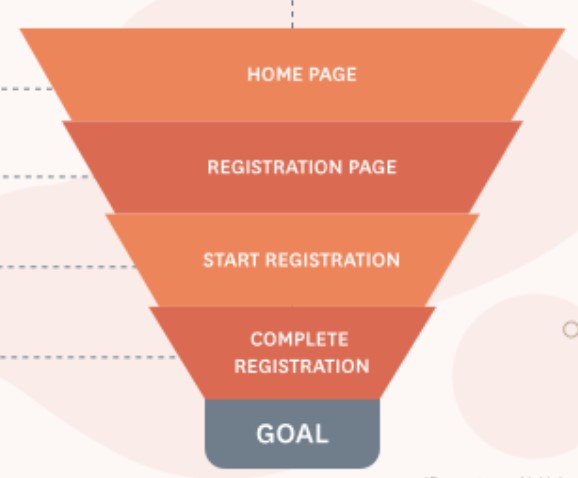 The following diagram summarizes the overall design of the system for real-time and near-real-time analytics and visualization. 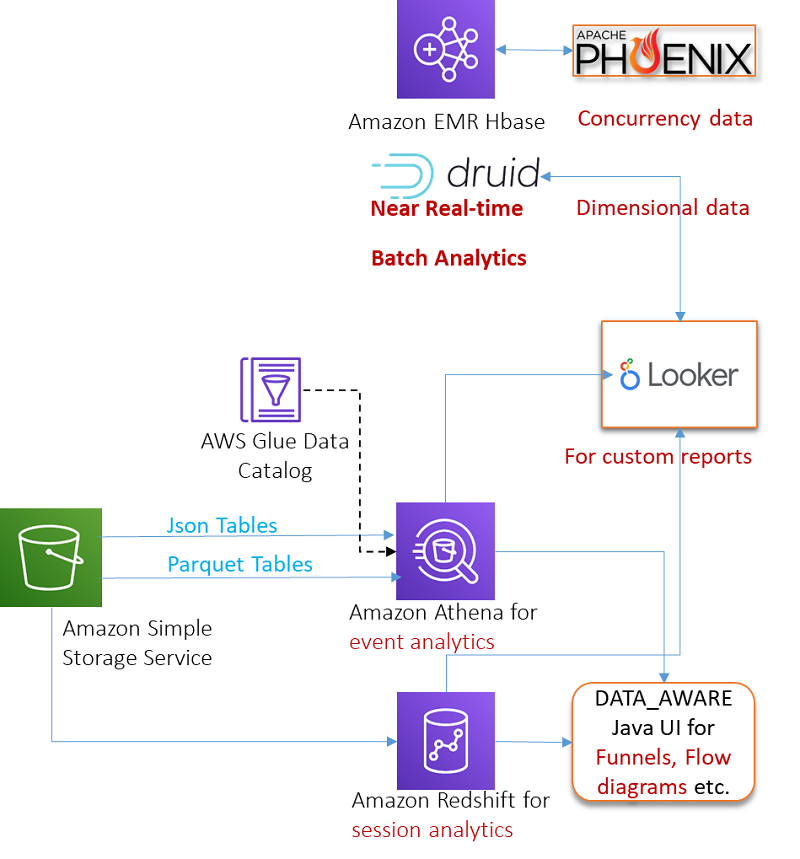 This architecture has enabled Dream11 to achieve all the design goals they set out with. Results of analytics for real-time requirements are available under millisecond latency, and the system costs 40% less than the previous system. Analytics is performed with all the data without sampling, so results are accurate and reliable. All the data and analytics engines are within Dream11’s AWS account, improving data security and privacy.

As of this writing, the system handles 14 TB of data per day and it has served 80 million requests per minute at peak during Dream11 IPL 2020.

Doing all their analytics in-house on AWS has not just improved speed, accuracy, and data security, it has also enabled newer possibilities. Now Dream11 has a 360-degree view of their users. They can study their users’ progress across multiple platforms – web, Android, and IOS. This new system is enabling novel applications of machine learning, digital user engagement, and social media technologies at Dream11.