Tips for Migrating to Apache HBase on Amazon S3 from HDFS

Starting with Amazon EMR 5.2.0, you have the option to run Apache HBase on Amazon S3. Running HBase on S3 gives you several added benefits, including lower costs, data durability, and easier scalability.

HBase provides several options that you can use to migrate and back up HBase tables. The steps to migrate to HBase on S3 are similar to the steps for HBase on the Apache Hadoop Distributed File System (HDFS). However, the migration can be easier if you are aware of some minor differences and a few “gotchas.”

In this post, I describe how to use some of the common HBase migration options to get started with HBase on S3.

Selecting the right migration method and tools is an important step in ensuring a successful HBase table migration. However, choosing the right ones is not always an easy task.

The following HBase helps you migrate to HBase on S3:

The following diagram summarizes the steps for each option.

If you’re migrating from an older version of HBase (for example, HBase 0.94), you should test your application to make sure it’s compatible with newer HBase API versions. You don’t want to spend several hours migrating a large table only to find out that your application and API have issues with a different HBase version.

The good news is that HBase provides utilities that you can use to migrate only part of a table. This lets you test your existing HBase applications without having to fully migrate entire HBase tables. For example, you can use the Export, Import, or CopyTable utilities to migrate a small part of your table to HBase on S3. After you confirm that your application works with newer HBase versions, you can proceed with migrating the entire table using HBase snapshots.

You can create table backups easily by using HBase snapshots. HBase also provides the ExportSnapshot utility, which lets you export snapshots to a different location, like S3. In this section, I discuss how you can combine snapshots with ExportSnapshot to migrate tables to HBase on S3.

The following example shows how to use snapshots to migrate HBase tables to HBase on S3.

The following steps show how to fix an HBase 0.94 snapshot so that it can be restored to an HBase on S3 table.

Option 2: Migrate to HBase on S3 using Export and Import

As I discussed in the earlier sections, HBase snapshots and ExportSnapshot are great options for migrating tables. But sometimes you want to migrate only part of a table, so you need a different tool. In this section, I describe how to use the HBase Export and Import utilities.

The steps to migrate a table to HBase on S3 using Export and Import is not much different from the steps provided in the HBase documentation. In those docs, you can also find detailed information, including how you can use them to migrate part of a table.

The following steps show how you can use Export and Import to migrate a table to HBase on S3.

HBase snapshots are usually the recommended method to migrate HBase tables. However, the Export and Import utilities can be useful for test use cases in which you migrate only a small part of your table and test your application. It’s also handy if you’re migrating from an HBase cluster that does not have the HBase snapshots feature.

Similar to the Export and Import utilities, CopyTable is an HBase utility that you can use to copy part of HBase tables. However, keep in mind that CopyTable doesn’t work if you’re copying or migrating tables between HBase versions that are not wire compatible (for example, copying from HBase 0.94 to HBase 1.x).

For more information and examples, see CopyTable in the HBase documentation.

Bruno Faria is an EMR Solution Architect with AWS. He works with our customers to provide them architectural guidance for running complex applications on Amazon EMR. In his spare time, he enjoys spending time with his family and learning about new big data solutions. 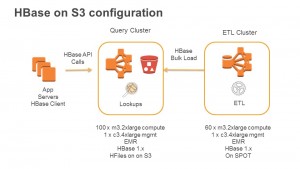