The Amazon Chime SDK Public Switched Telephone Network (PSTN) Audio makes it easier for
developers to build customized telephony applications using the agility and operational simplicity of a
serverless AWS Lambda function. The CallAndBridge action enables developers to take an incoming call
from one phone number and forward/bridge the caller to a new outbound call. This is particularly useful
if you want to perform initial actions on the inbound call, like play a greeting or support IVR (Interactive
Voice Response) functionality before connecting the caller to the new outbound call. The destination
phone number may depend on factors like selections made in the IVR, time of day, or in a “follow-me”
type manner where you try connecting to a primary number, and attempt subsequent numbers if the
primary number(s) are unreachable. Using the CallAndBridge action also provides the ability to mask
personal phone numbers between callers and callees.

In this blog, we will walk through how to implement the CallAndBridge action to build a call forwarding
solution that includes a simple user interface (UI) to manage the mapping of inbound and outbound
phone numbers. The voice application is written as an AWS Lambda function using Python and provides
functionality to play a prompt or greeting to the inbound caller while the outbound call is established
before bridging the two participants together. 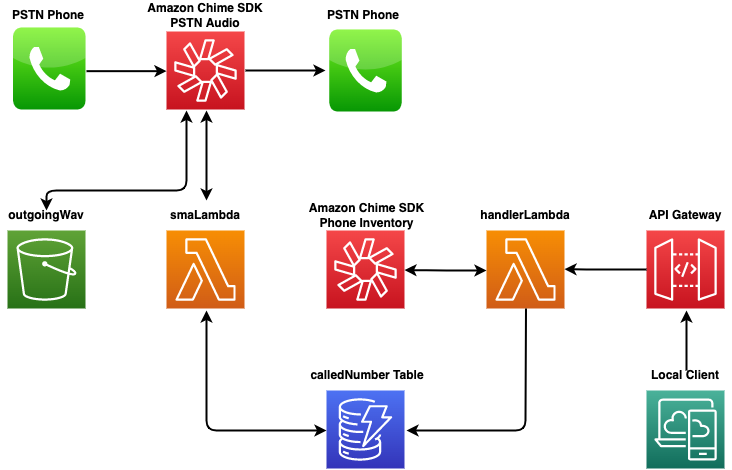 The AWS elements used in this demo are:

You can learn more about how to build PSTN-enabled voice applications in the Amazon Chime SDK by
consulting our documentation. Please note your AWS account will be charged for usage of these services.

The architecture includes the following components:

After successfully deploying the CDK components, take note of the smaPhoneNumber in the output of the deployment script. This is the Amazon Chime SDK PSTN Audio phone number provisioned as described in the Resources Created section; it will be used as the inbound phone number in our demo.

We now want to setup a call forward for this number using the local React client. If you have started yarn successfully, it will output the URL that the client can be accessed – http://localhost:3000 – from here we can enable and disable call forwards.

To enable a call forward, first select “Forward a Number” and then select from the list the phone number that was created earlier. Next, populate the destination number in the “Number to Forward to” field.

Once submitted, make a test call to the phone number and you should be greeted with a “please wait while we connect your call” message while waiting for the destination number to answer – once answered, both participants can now converse, without either of the participants’ phone numbers have been revealed. 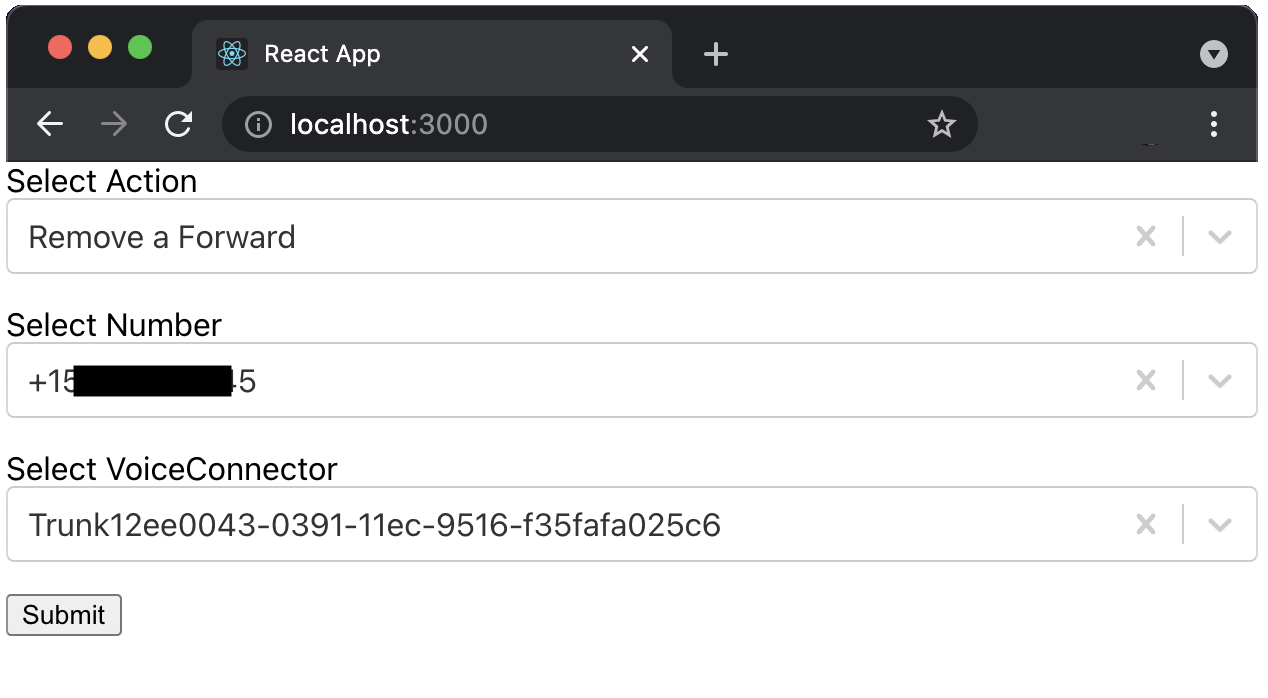 Let’s first look at the components that are solely part of enabling and disabling call forwards. The local client is a simple React UI that communicates with the handlerLambda function via API Gateway that configures the phone number Product Type and whether it is routed to your SIP Media Application or a Voice Connector. Enabling a forward also inserts a mapping of the dialed_number to destination_number into the calledNumber DynamoDB table that the smaLambda function will query when bridging calls. Disabling a forward removes the number mapping from the DynamoDB table.

At this point, we have the components that support the call flow. When a call is placed to the phone number configured with the SipMediaApplicationDialIn Product Type, a SIP Media Application rule will route the call to the SIP Media Application. This will invoke the smaLambda function, which is the main call routing logic in this demo, with a NEW_INBOUND_CALL event which calls new_call_handler. In response the CallAndBridge action will be returned to the Amazon Chime SDK PSTN Audio service after querying DynamoDB for the destination number:

This will forward the incoming PSTN call to a new outbound call to the E.164 number stored in DynamoDB. The CallAndBridge action is encapsulated in the following function where we provide the greeting wav file in the optional RingbackTone parameter:

It’s simple to change the behavior of the greeting played to the inbound caller by using the LoopGreetingWhileRinging environment variable on the smaLambda function. By default (`True`) the greeting will be looped until the outbound destination number is answered. If we set this variable to False the greeting will be played in its entirety once before the outbound destination number is called. This results in a response to the `NEW_INBOUND_CALL` event with two separate actions, `PlayAudio` and `CallAndBridge`:

We can also remove the greeting entirely by using the call_and_bridge_to_pstn Python function which does not pass a RingbackTone parameter; the caller will immediately hear the ringing signal from the outbound call:

There are additional handlers added for failed actions that allow you to gracefully play a failure greeting to the inbound caller, hang up that call, or potentially try a second destination number in a “follow-me” type scenario should the first outbound destination be unreachable. Amazon CloudWatch Logs can be used to inspect verbose logging of call behavior to understand the exact flow the code takes for each call.

We can also use this solution to achieve number privacy between the two parties: the inbound caller has placed a call to the demo number and does not have visibility into what the final called destination number is. Similarly, when we create the outbound call we set the Caller ID to the demo number so the callee does not have visibility into the phone number of the inbound caller.

This demo has showcased how the Amazon Chime SDK PSTN Audio CallAndBridge action can be used for basic PSTN call bridging, amongst other actions such as PlayAudio and Hangup in a simple Python Lambda function. This blog also demonstrated how a simple table in DynamoDB can be used to store PSTN routing data. You can leverage the technology and the development patterns showcased in this demo to implement solutions that enable remote working, mobile workers with multiple contact phone numbers, Interactive Voice Response (IVR) menus and augment cloud-based or on-premise call centers while providing privacy on the calling and called party phone numbers. CallAndBridge is just one of a number of supported PSTN actions currently available.

See our github repo for the project code: https://github.com/aws-samples/amazon-chime-sma-call-forwarding