Today we’re launching a new feature for the Amazon Chime SDK to allow builders to capture the contents of a meeting. This new feature, media capture pipeline, captures meeting audio, video, and content share streams, along with meeting events and data messages, and saves them to an Amazon Simple Storage Service (Amazon S3, or S3) bucket designated by the builder. By default, the media capture pipeline with the Amazon Chime SDK provides the ability to capture the mixed meeting audio stream for the duration of the capture, as well as the video of the active speaker when their video is available, and the content share streams when available. Builders can request to turn off the active speaker video and instead capture individual video streams of each attendee when they are active. All meeting artifacts are delivered to the S3 bucked designated by the builder in up to five second file chunks throughout the meeting.

Previously we published a blog demonstrating how you can enable client-side recording using the Amazon Chime SDK, on your own Amazon Elastic Container Service (Amazon ECS) infrastructure. It requires builders to deploy and maintain their serverless application in containers and record the meeting through a browser’s built-in API to capture the browser session as a single video stream. With the new media capture pipeline feature, the builders only need to call the new APIs to start the media capture and no longer need to worry about extra infrastructure.

Media capture can be started by calling CreateMediaCapturePipeline API. By specifying the Amazon Chime SDK Meeting and S3 bucket in the API request, the media capture pipeline service will start to capture the meeting’s content and upload them to the specified S3 bucket. When the DeleteMediaCapturePipeline API is called to stop the media capture pipeline or if the Amazon Chime SDK meeting ends, the meeting capture stops.

In this blog post, we will walk through the functionalities of new media capture pipeline. We will manually start a media capture pipeline to capture an ongoing Amazon Chime SDK meeting, and then we look at what we can do with the captured artifacts. We have also included an AWS Cloud Development Kit (CDK) package for you to deploy a simple demo app to try out this new feature by including a button on a React page. 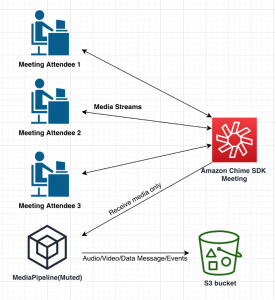 Note: Deploying this demo and receiving traffic from the demo created in this post can incur AWS charges.

Recording or capturing Amazon Chime SDK meetings with the demo in this blog may be subject to laws or regulations regarding the recording of electronic communications. It is your and your end users’ responsibility to comply with all applicable laws regarding the recordings, including properly notifying all participants in a recorded session, or communication that the session or communication is being recorded, and obtain their consent.

Four new APIs have been added to the AWS SDK under Amazon Chime for media capture pipeline functionalities:

Please read the AWS API reference for more details on how to use these APIs.

This blog post uses AWS Command Line Interface to call the AWS APIs. It will be a similar request in a different syntax if using other languages of AWS SDK, such as Java, Javascript or Go.

In command line terminal, ensure you have AWS credentials configured in your ~/.aws folder for a role with a policy allowing chime:* and s3:GetBucketPolicy. Run this command to start media capture pipeline:

With the command executed successfully, the response below is followed. The MediaPipelineId is used for later.

In the Amazon Chime SDK meeting roster, a new attendee named “MediaPipeline-*” appears. This is the attendee we use to capture the meeting audio, video, content, data messages, and events. It will always be muted. 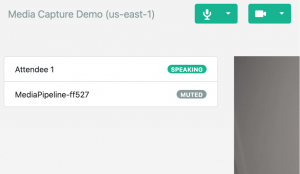 Shortly after the capture is started, the captured artifacts will begin to be uploaded into the S3 destination defined in SinkArn. 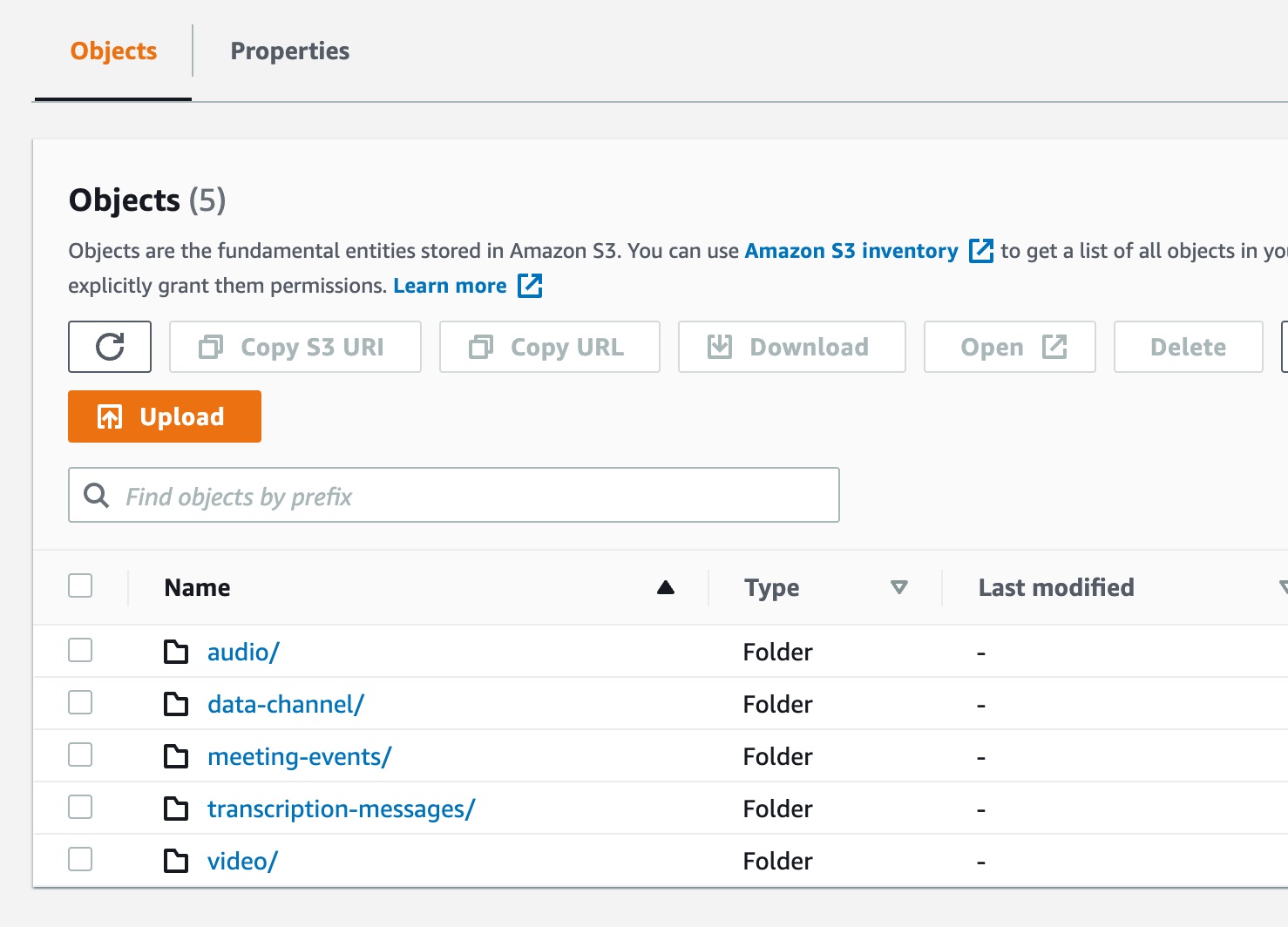 Media capture pipeline supports configurable source and artifacts configuration. By providing the parameters in create-media-capture-pipeline, you can choose between AudioOnly mode and AudioWithActiveSpeakerVideo mode. In addition, you can also enable individual video stream or just selected attendees’ video to be captured. Please check out the API reference for detail.

Here we have an example to use aws command line to provide customized parameter for create-media-capture-pipeline API.

We start with generating the cli skeleton json file:

ChimeSdkMeetingConfiguration is an optional field to define the capture configuration for the media capture pipeline.

After editing JSON file with proper parameters, you can run the aws command line to create a media capture pipeline:

When you want to stop the media capture pipeline, run the below command. The media-pipeline-id is the value returned in the create-media-capture-pipeline response.

Once the API is called, the MediaPipeline attendee will leave the meeting and the capture will stop. No new captured artifacts are uploaded into S3 bucket unless new media capture pipeline is started with same SinkArn.

Now let’s take a look the artifacts under each folder.

Inside the “audio” folder, are the mixed audio tracks with active speaker video of the meeting chunked into 5 second pieces. The file name is in the format of yyyy-MM-dd-HH-mm-ss-SSS.mp4. 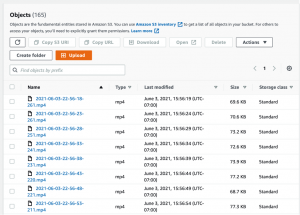 The “video” folder, by default will contain the content share streams with suffix of “#content” as part of the attendee id that is in the file name.

The file name format is yyyy-MM-dd-HH-mm-ss-SSS-[ATTENDEE-ID]#content.mp4.

The “meeting-events”, “data-channel” and “transcription-messages” folders contain the events message, the data channel message and transcriptions (if Chime SDK Live transcription enabled) respectively. These artifacts only appear if there is an event or message occurs in the meeting during the recording.

Demo for combining the meeting artifacts

We have also included an AWS Cloud Development Kit (AWS CDK) deployment that can be used to see these new features in action. This deployment includes the following:

The instructions for the deployment and use of the demo are included in the github repo. This demo uses the AWS SDK versions of the createMediaCapturePipeline and deleteMediaCapturePipeline in a Node.JS Lambda to create and delete media capture pipelines. A React client is used to create and join an Amazon Chime SDK meeting. Finally, a Python Lambda is used to create a combined media file once recording has stopped.

Before we get started, we need to clarify these two concepts: What is video compositing? And what is concatenation?

Generally speaking, video compositing is the process of combining visual elements from difference sources into single image. In the context of Amazon Chime SDK meeting, video compositing is combining attendees’ video, and displayed such as grid view in one video stream. Note that this combined video stream recording will still be stored in your S3 bucket as 5 second chunk.

Concatenation is the technique to merge all these chunks into a single file. In this blog, we introduced to use FFMPEG to concatenate the video and audio chunks by yourself, but now you can use CreateMediaConcatenationPipeline to merge the media capture artifacts that’s generated from media capture pipeline.

We will be using CreateMediaCapturePipeline request examples to demonstrate different video compositing layout. 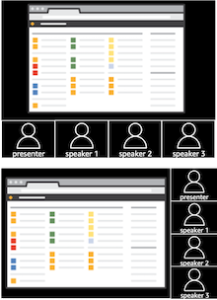 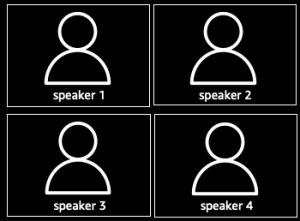 When content is not being shared in either “Presenter only” or “Feature content share,” Grid View will be the default layout. In this layout, each video stream will occupy a tile and will automatically scale based on the number of video streams in the meeting session. Tiles are automatically arranged in rows and columns based on number of video streams with a maximum of 25 video tiles. See that added code block in the example JSON file below. Note that SourceConfiguration is an optional field, it can use either AttendeeIds or ExternalUserIds to select the source. ExternalUserIds is often the friendly name or other identifier of the attendee that the builder chooses.

The video compositing configuration will generate the composited video chunks in your designated S3 location under “CompositedVideo” prefix. To merge these chunks into a single file, you can follow the out developer guide on media concatenation pipeline.

In this blog, we walked through the new media capture pipeline feature that enables the builder to capture Amazon Chime SDK meetings without the need of maintaining their own container fleet. You also learned about deploying the demo to try out the media capture functionalities, as well as combining the media artifacts.

As the next steps, we suggest you to check out the media capture pipeline developer guide for more details and requirements.