In this post, I show how to build a flexible in-memory AWS Lambda caching layer using Lambda extensions. Lambda functions use REST API calls to access the data and configuration from the cache. This can reduce latency and cost when consuming data from AWS services such as Amazon DynamoDB, AWS Systems Manager Parameter Store, and AWS Secrets Manager.

Applications making frequent API calls to retrieve static data can benefit from a caching layer. This can reduce the function’s latency, particularly for synchronous requests, as the data is retrieved from the cache instead of an external service. The cache can also reduce costs by reducing the number of calls to downstream services.

There are two types of cache to consider in this situation:

Lambda extensions are a new way for tools to integrate more easily into the Lambda execution environment and control and participate in Lambda’s lifecycle. They use the Extensions API, a new HTTP interface, to register for lifecycle events during function initialization, invocation, and shutdown.

They can also use environment variables to add options and tools to the runtime, or use wrapper scripts to customize the runtime startup behavior. The Lambda cache uses Lambda extensions to run as a separate process.

To learn more about how to use extensions with your functions, read “Introducing AWS Lambda extensions”.

To set up the example, visit the GitHub repo, and follow the instructions in the README.md file.

To install the example: 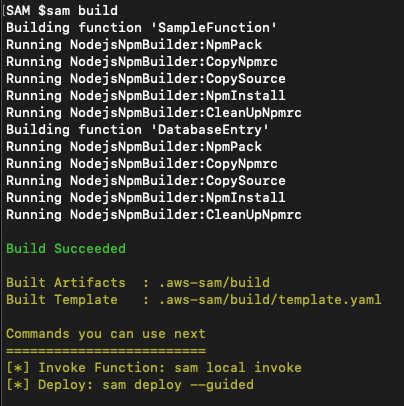 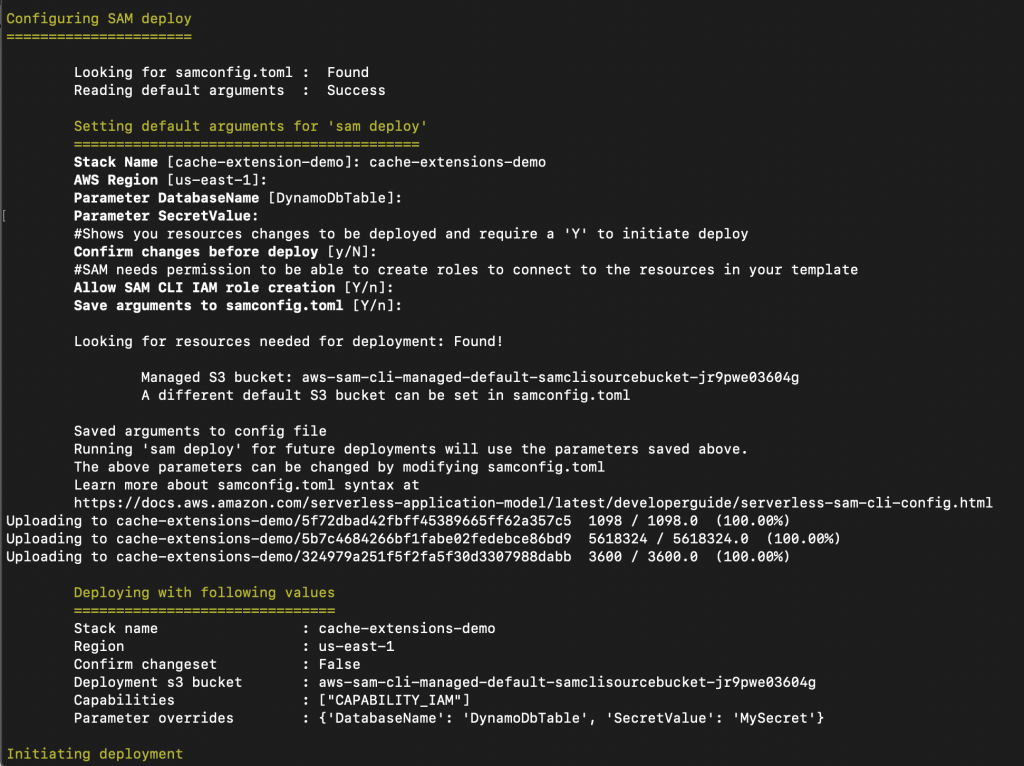 The cache extension is delivered as a Lambda layer and added to ExtensionsCache-SampleFunction.

It is written as a self-contained binary in Golang, which makes the extension compatible with all of the supported runtimes. The extension caches the data from DynamoDB, Parameter Store, and Secrets Manager, and then runs a local HTTP endpoint to service the data. The Lambda function retrieves the configuration data from the cache using a local HTTP REST API call.

Here is the architecture diagram. 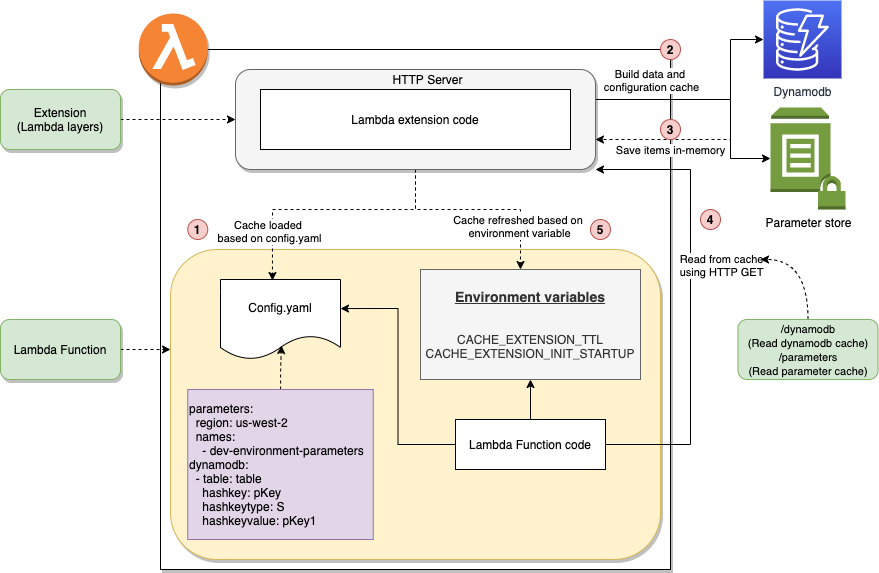 Once deployed, the extension performs the following steps: 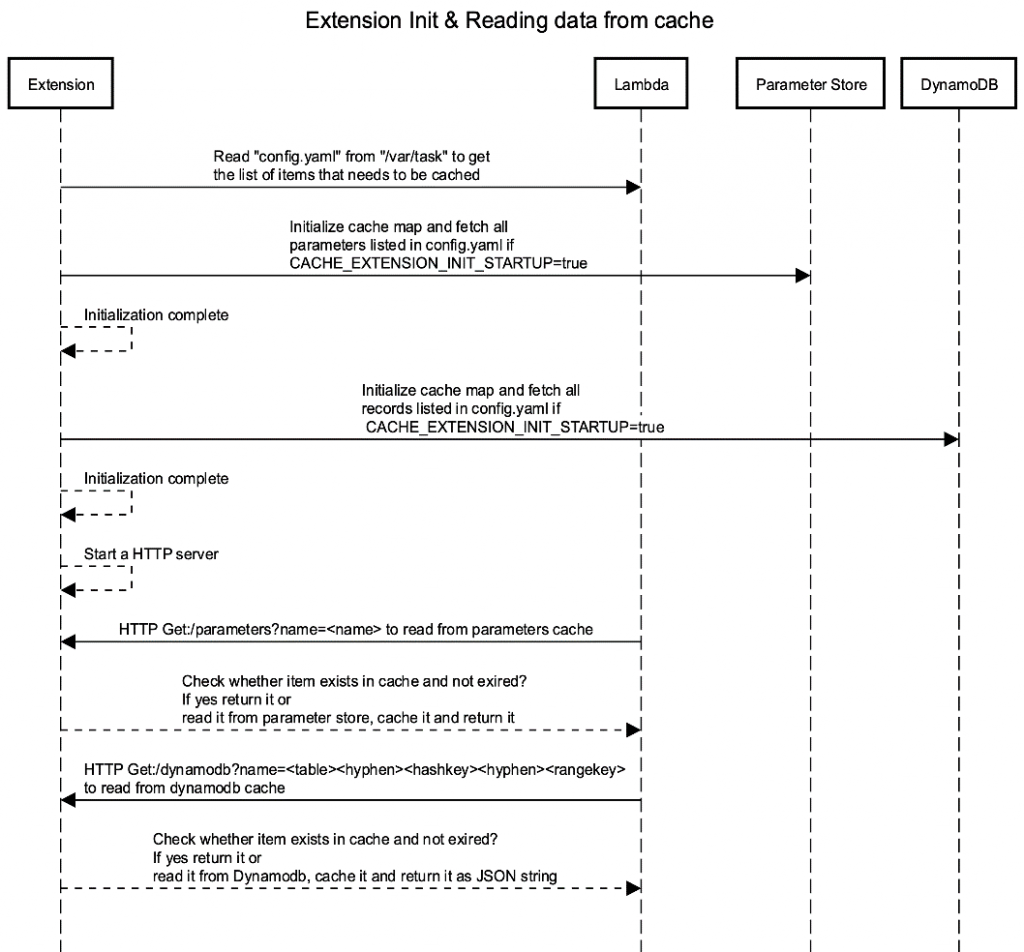 Once the AWS SAM template is deployed, navigate to the AWS Lambda console. 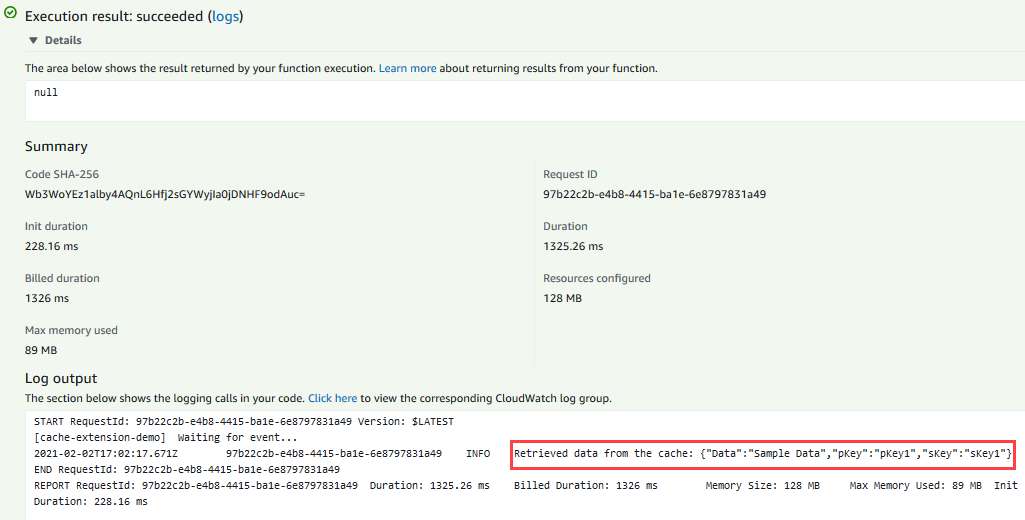 The benefits of using Lambda extensions

There are a number of benefits to using a Lambda extension for this solution:

To test the performance of the cache extension, I compare two tests:

Both functions are configured with 512 MB of memory and the function timeout is set to 30 seconds.

I use Artillery to load test both Lambda functions. The load runs for 100 invocations over 2 minutes. I use Amazon CloudWatch metrics to view the function average durations.

Test 1 shows a duration of 43 ms for the first invocation as a cold start. Subsequent invocations average 22 ms.

Test 2 shows a duration of 16 ms for the first invocation as a cold start. Subsequent invocations average 3 ms.

In this example, the CACHE_EXTENSION_INIT_STARTUP environment variable flag is not configured. With the flag enabled for the extension, data is pre-fetched during extension initialization and the cold start time is further reduced.

Using Lambda extensions is an effective way to cache static data from external services in Lambda functions. This reduces function latency and costs. This post shows how to build both a data and configuration cache using DynamoDB, Parameter Store, and Secrets Manager.

To set up the walkthrough demo in this post, visit the GitHub repo, and follow the instructions in the README.md file.