In a postal system, a dead-letter office is a facility for processing undeliverable mail. In pub/sub messaging, a dead-letter queue (DLQ) is a queue to which messages published to a topic can be sent, in case those messages cannot be delivered to a subscribed endpoint.

The delivery of a message fails when it’s not possible for Amazon SNS to access the subscribed endpoint. There are two reasons why this might happen:

Client errors happen when SNS has stale subscription metadata. One common cause of client errors is when you (the endpoint owner) delete the endpoint. For example, you might delete the SQS queue that is subscribed to your SNS topic, without also deleting the SNS subscription corresponding to the queue. Another common cause is when you change the resource policy attached to your endpoint in a way that prevents SNS from delivering messages to that endpoint.

Server errors happen when the system that powers the subscribed endpoint is unavailable, or when it returns an exception response indicating that it failed to process a valid request from SNS.

When server errors occur, SNS retries the failed deliveries according to a backoff function, which can be either linear or exponential. When a server error occurs for an AWS managed endpoint, backed by either SQS or Lambda, then SNS retries the delivery for up to 100,015 times, over 23 days.

SNS may receive a client error, or continue to receive a server error for a message beyond the number of retries defined by the corresponding retry policy. In that event, SNS discards the message. Setting a DLQ to your SNS subscription enables you to keep this message, regardless of the type of error, either client or server. DLQs give you more control over messages that cannot be delivered.

In SNS, DLQs store the messages that failed to be delivered to subscribed endpoints. For more information, see Amazon SNS Dead-Letter Queues.

In Lambda, DLQs store the messages that resulted in failed asynchronous executions of your Lambda function. An execution can result in an error for several reasons. Your code might raise an exception, time out, or run out of memory. The runtime executing your code might encounter an error and stop. Your function might hit its concurrency limit and be throttled. Regardless of the error type, when the error occurs, your code might have run completely, partially, or not at all. By default, Lambda retries an asynchronous execution twice. After exhausting the retries, Lambda can sideline the message to the DLQ. For more information, see AWS Lambda Dead-Letter Queues.

When you have a fan-out architecture, with SQS queues and Lambda functions subscribed to an SNS topic, we recommend that you set DLQs to your SNS subscriptions, and to your destination queues and functions as well. This approach gives your application resilience against message delivery failures, message processing failures, and function execution failures too.

Applying DLQs in a use case

Here’s how everything comes together. The following diagram shows a serverless backend architecture that supports a car rental application. This is a durable serverless architecture based on DLQs for SNS, SQS, and Lambda. 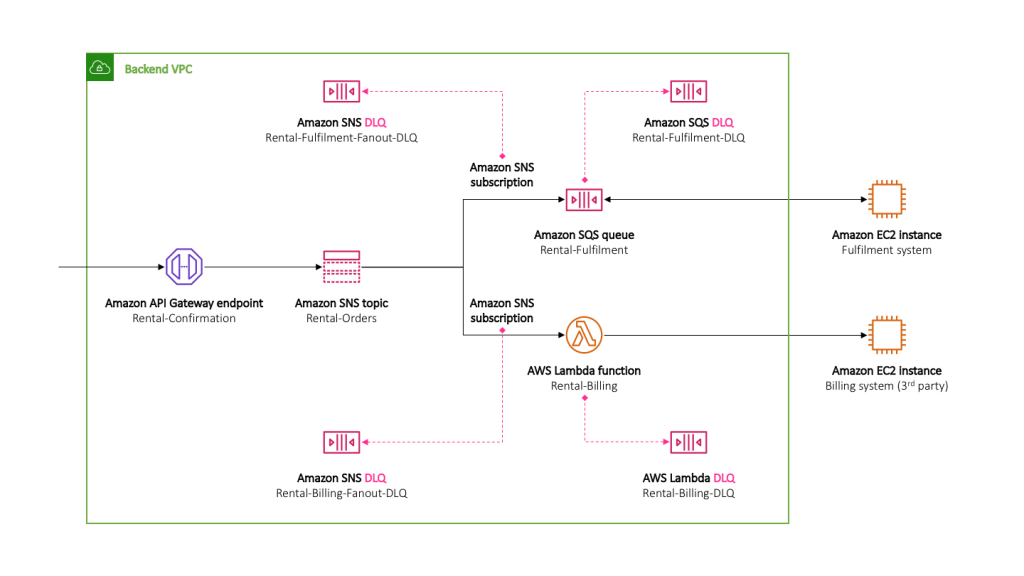 When a customer places an order to rent a car, the application sends that request to an API, which is powered by Amazon API Gateway. The REST API is backed by an SNS topic named Rental-Orders, and deployed onto an Amazon VPC subnet. The topic then fans out that order to the following two subscribed endpoints, for parallel processing:

To increase the durability of this serverless backend API, the following DLQs have been set up:

When the DLQ captures the message, you can inspect the message for troubleshooting purposes. After you address the error at hand, you can poll the DLQ to retry the processing of the message.

Setting up DLQs for subscriptions, queues, and functions can be done using the AWS Management Console, SDK, CLI, API, or AWS CloudFormation. You can use the SDK, CLI, and API for polling the DLQs as well.

Here’s how you can configure one of the SNS DLQs applied in the car rental application example, presented earlier.

The following JSON object is a CloudFormation template that subscribes the SQS queue Rental-Fulfilment to the SNS topic Rental-Orders. The template also sets a RedrivePolicy that targets Rental-Fulfilment-Fanout-DLQ as a DLQ.

Lastly, the template sets a FilterPolicy value. It makes SNS deliver a message to the subscribed queue only if the published message carries an attribute named order-status with value set to either confirmed or canceled. As Amazon SNS Message Filtering happens before message delivery, messages that are filtered out aren’t sent to that subscription’s DLQ.

Internally, the CloudFormation template uses the SNS Subscribe API action for deploying the subscription and setting both policies, all part of the same API request.

Maybe the SNS topic and subscription are already deployed. In that case, you can use the SNS SetSubscriptionAttributes API action to set the RedrivePolicy, as shown by the following code examples, based on the AWS CLI and the AWS SDK for Java.

You can use Amazon CloudWatch metrics and alarms to monitor the DLQs associated with your SNS subscriptions. In the car rental example, you can monitor the DLQs to be notified when the API failed to distribute any car rental order to the fulfillment or billing systems.

You might have a case where you expect the DLQ to be always empty. In that case, create an CloudWatch alarm on NumberOfMessagesSent, set the alarm threshold to zero, and provide a separate SNS topic to be notified when the alarm goes off. The SNS topic, in its turn, can delivery your alarm notification to any endpoint type that you choose, such as email address, phone number, or mobile pager app.

Additionally, SNS itself provides its own set of metrics that are relevant to DLQs. Specifically, SNS metrics include the following:

Use CloudWatch Logs to see the exceptions that caused your SNS deliveries to fail and your messages to be sidelined to DLQs. In the car rental example, you can inspect the rental orders in the DLQs, as well as the logs associated with these queues. Then you can understand why those orders failed to be fanned out to the fulfilment or billing systems.

SNS can log both successful and failed deliveries in CloudWatch. You can enable Amazon SNS Delivery Status Logging by setting three SNS topic attributes, which are delivery protocol-specific. As an example, for SNS deliveries to SQS queues, you must set the following topic attributes: SQSSuccessFeedbackRoleArn,  SQSFailureFeedbackRoleArn, and SQSSuccessFeedbackSampleRate.

The following JSON object represents a successful SNS delivery in an CloudWatch Logs entry. The status code logged is 200 (SUCCESS). The attribute RedrivePolicy shows that the SNS subscription in question had its DLQ set.

The following JSON object represents a failed SNS delivery in CloudWatch Logs. In the following code example, the subscribed queue doesn’t exist. As a client error, the status code logged is 400 (FAILURE). Again, the RedrivePolicy attribute refers to a DLQ.

By analyzing Amazon CloudWatch Logs entries, you can understand why an SNS message was moved to a DLQ, and then take the required set of steps to recover the message. When you enable delivery status logging in SNS, you can configure the sample rate in which deliveries are logged, from 0% to 100%.

To follow this security recommendation, give the CMK you used to encrypt your DLQ a key policy that grants the SNS service principal access to AWS KMS API actions. For example, see the following sample key policy:

If you have an SNS encrypted topic, but a subscription in this topic points to a DLQ that isn’t an SQS encrypted queue, then messages sidelined to the DLQ aren’t encrypted at rest.

DLQs for SNS, SQS, and Lambda increase the resiliency and durability of your applications. These DLQs address different failure modes, and can be used together.

Setting up DLQs for subscriptions, queues, and functions can be done using the AWS Management Console, SDK, CLI, API, or CloudFormation. DLQs are available in all AWS Regions. Start today by running the tutorials: