This post is written by Pallavi Ravishankar a Senior Product Manager and Jason Nicholls an Enterprise Solutions Architect.

Failure management is a key part of the reliability pillar within the AWS Well-Architected Framework. But things fail, and operating systems are no exception. An operating system update, application update, a misconfiguration, missing driver, or incorrect security permissions can prevent systems from starting up correctly.

In a previous post, we demonstrated how you can access the GNU GRand Unified Boot-loader (GRUB) using EC2 Serial console to fix a failed Linux kernel load. In this blog post, we show you how you can use EC2 Serial Console to debug and fix your Amazon EC2 Windows Instances.

Before you simulate the network failure, you must configure SAC to read and write from the instance’s virtual serial port.

The SAC interface lets you interact with the Microsoft Windows Operating System, providing administrative access even if network connectivity is not functional. SAC is not enabled by default and must be configured.

You can configure SAC via the Windows’ Command shell or PowerShell. Or you can set up SAC during your instance creation by using EC2 user data. User data is a feature of EC2 that allows you to specify parameters for configuring your instance, or include a simple script. The simple script is carried out at launch.

Ensure that the operating system is Windows Server 2019, the user data is set, and the instance family is correct before launching your instance.

Once your instance is initialized, retrieve the Windows password from the EC2 console or AWS Command Line Interface (CLI). You have now successfully configured SAC access via the instance’s virtual serial port.

Previously, if an EC2 instance became unresponsive, the only available recourse was to shut it down, and mount the disk on a secondary EC2 instance. You could then use the secondary instance to fix the issue. Today, you can use EC2 Serial Console to debug the problem.

Let’s simulate a complete network failure on your newly created EC2 instance by shutting down the Ethernet service. Use Remote Desktop to connect to your EC2 instance. Once you’re connected, open a Windows command shell in administrative mode and run the following command:

The command should show a list of network interfaces available. If you are using an AWS Windows Amazon Machine Image (AMI), the interface “Ethernet 3” should show as enabled. An example of what you should see is depicted in the following image.

Run the following netsh command to disable the network interface:

The network interface is disabled the moment you press enter and your Remote Desktop connection should shut down, as shown in the following screenshot. 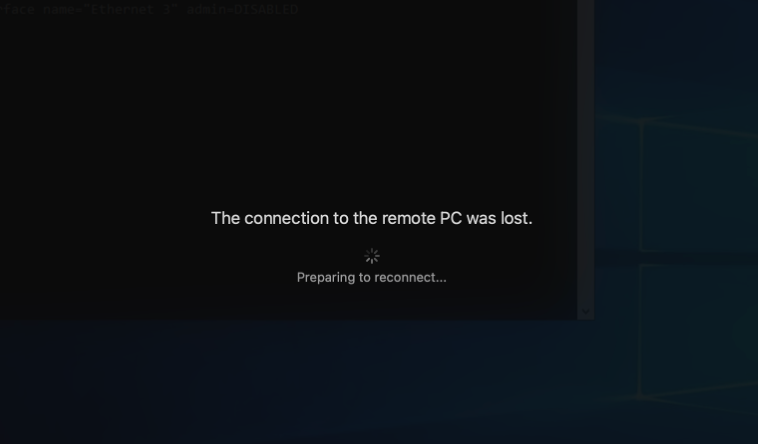 Even if you reboot the instance, you will see that the connection to the instance fails. This is because the network interface has been disabled.

The SSH session is authorized using an SSH key pair. You can access the EC2 Serial Console using the:

The console then presents you with the channel information screen after selecting the command shell channel, similar to the following image. 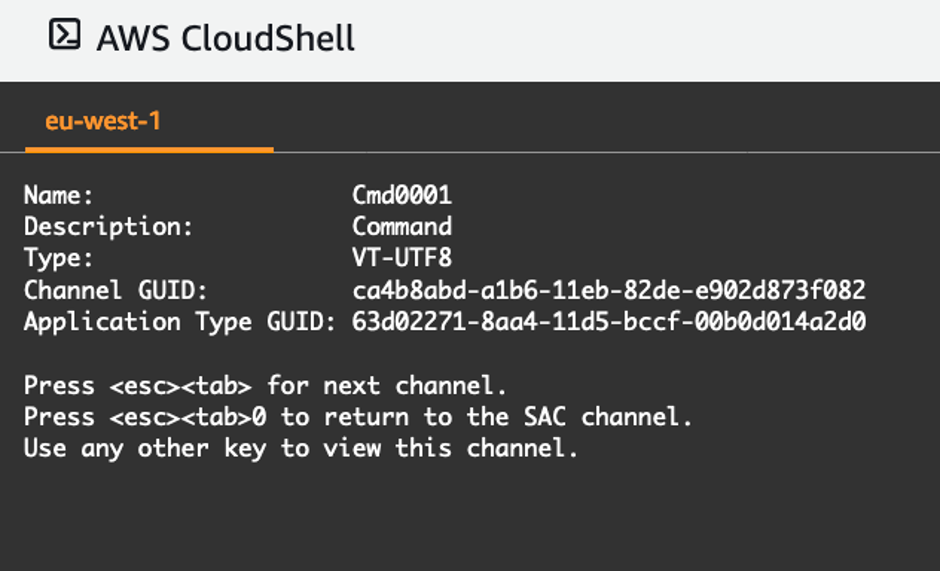 Press the enter key to be dropped into the channel.

Now that you are authenticated, use the command shell to fix the problem.

After running the preceding commands, the command shell shows that we disabled the network interface. An example of this is illustrated in the following image.

Let’s undo our misconfiguration by running the netsh command:

You can now use Remote Desktop to access the instance again.

Without closing the EC2 Serial Console, reboot the instance by running the following command:

Your instance then reboots, which you can see via EC2 Serial Console. First, it drops back to the SAC menu to inform you of a reboot. Notice that the Microsoft Windows boot manager menu on reboot as seen in the following image. 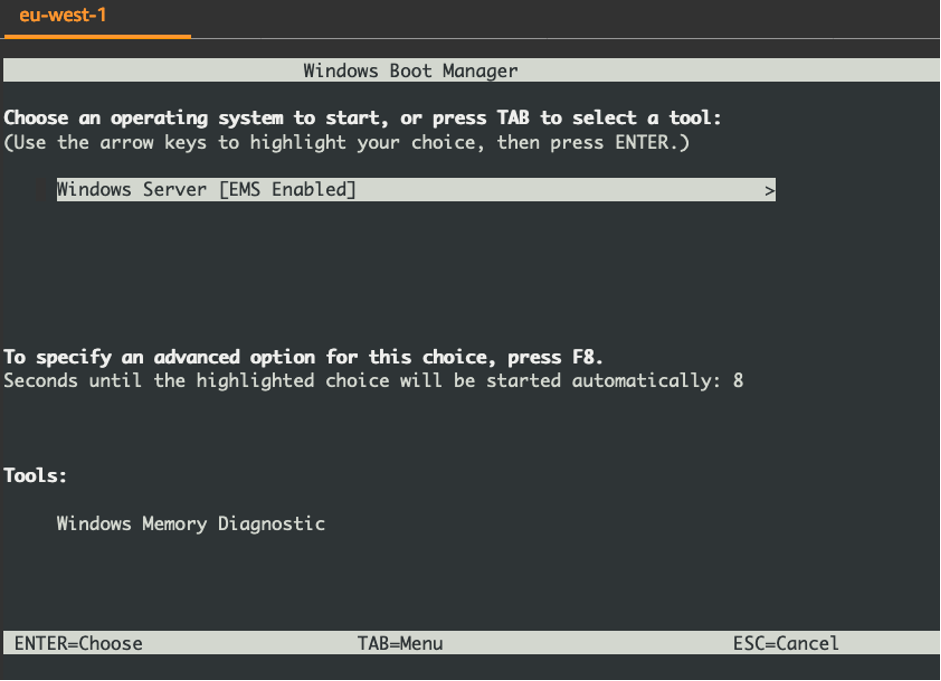 The advanced boot options screen presented in the following image let you start Windows in advanced troubleshooting modes. These modes include repairing the instance, rolling back to a previous configuration, debugging your instance, or starting up in safe mode. To access the advanced boot options, press Esc + 8 on the Windows Server [EMS Enabled] menu option. 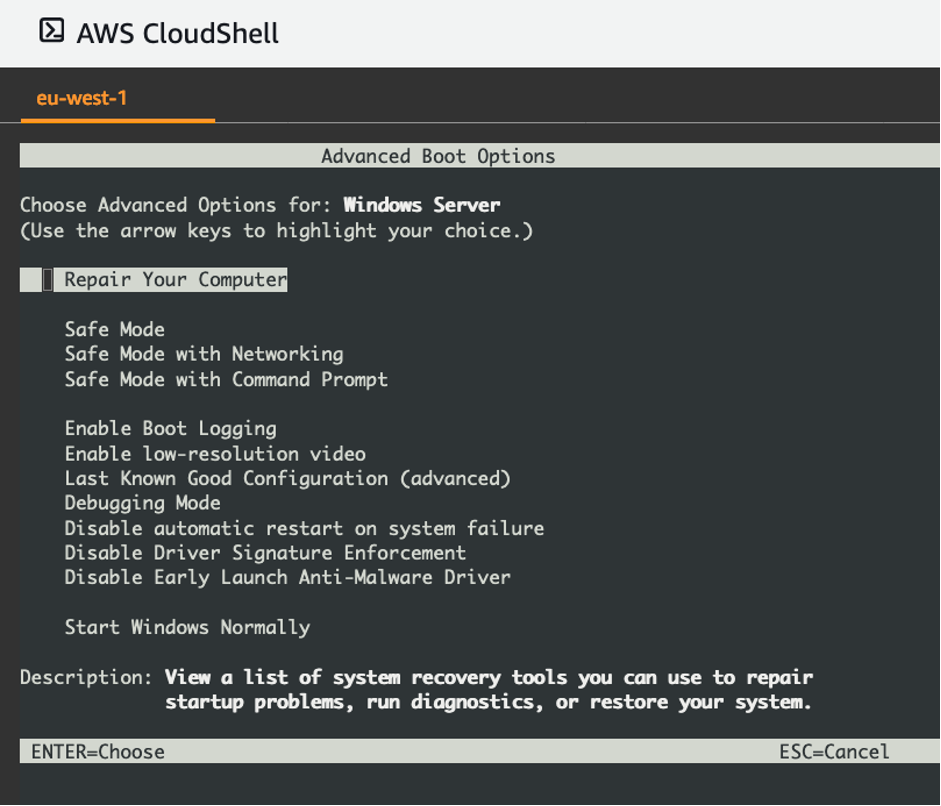 By following this post, you setup SAC to read and write to the virtual serial port. You then disabled ethernet access. After confirming that you could no longer access your instance you used EC2 Serial Console to regain access and revert the changes.

After you’ve finished with the instance you created for this post, you should clean up by deleting the instance. This will prevent you from incurring any additional costs. To delete the instance:

Amazon EC2 shuts down and deletes your instance. After your instance is deleted, it remains visible on the console for a short while, and then the entry is automatically deleted. You cannot remove the deleted instance from the console display yourself.