Since AWS Copilot CLI launched in 2020, developers have been using the tool to build, manage, and operate Linux containers successfully on Amazon Elastic Container Service (Amazon ECS) and AWS Fargate. By leaving the infrastructure-knitting and resource-wrangling to AWS Copilot, builders can spend more time focused on their business logic. With yesterday’s launch of Amazon ECS on AWS Fargate, Windows developers can now take advantage of AWS Copilot’s intuitive, guided experience to launch their apps in minutes.

AWS Copilot follows Amazon ECS best practices by default (read about our design tenets), and offers plenty of flexibility for customization. To launch a Windows container, start with a Windows-based Dockerfile on your Windows machine (no need for WSL!). Under the hood, AWS Copilot will detect your platform and build your container image for Windows. Then, Copilot will deploy your app on Amazon ECS with Fargate for Windows. That’s it— you’re in business!

Let’s take a closer look at each step by deploying an example app together. We’re going to build and launch a load-balanced Flask app that talks to an Amazon DynamoDB table.

Our Dockerfile is building on a Windows base image, python:3.7-windowsservercore-1809. Base images must be for Windows Server 2019. We create a working directory, then copy and install dependencies from our source requirements.txt file.

We then copy the entry point file for our Flask app and the Jinja2 template containing basic HTML.

For today’s walkthrough, let’s run each copilot init subcommand separately to examine what exactly is happening with each step, and explore opportunities for customization.

Name and create your application with copilot app init

What you’re doing:
With copilot app init, you are naming and creating your application, the overarching grouping of related workloads (services, scheduled jobs, one-off tasks) and environments.

What AWS Copilot is doing:
At this point, AWS Copilot creates the IAM roles needed to manage the release infrastructure, as well as a copilot\ subdirectory in your working directory. Any AWS Copilot-generated manifests or additional infrastructure will live here.

Options:
You may pass in flags with copilot app init : --domain to specify an existing domain name that you’d like to use, and --resource-tags to add custom tags to resources provisioned for this app.

Name and create your application’s environment with copilot env init

What you’re doing:
Here, you are creating and naming an environment, which you might think of as a stage of deployment. Many people like to have separate ‘test’ and ‘prod’ environments. Other use environments as a sandboxes for developers or teams of developers. In this step, you are prompted for environment credentials specific to the environment you are initializing. You can create your environments with AWS accounts and in Regions that are different than those of your app!

What AWS Copilot is doing:
Under the hood, AWS Copilot generates all of the AWS resources required for networking (VPC, subnets, security groups, route tables, internet gateway, IAM roles). It also creates the resources to be shared among the workloads deployed in this environment (Amazon ECS cluster, Application Load Balancer).

Options:
If you already have a VPC and would rather not spin up another one, or if you have specific networking requirements (for instance, you want only private subnets), you may import your own existing resources at the prompt.

copilot env init has flags that enable you to pass in the various required values if you’d rather skip the prompts. It also has a few flags to indicate CIDRs for subnets/VPC if you don’t want to use the defaults.

What you’re doing:
When you run copilot svc init, AWS Copilot prompts you to choose a service type. AWS Copilot sets up your infrastructure in the copilot svc deploy step based on what kind of service (Load Balanced Web Service, Backend service, or Worker service) you are building. Review our docs for more details. After you name your service and confirm the path to your Dockerfile, you have the option to update your manifest file (more on that to come).

What AWS Copilot is doing:
At copilot svc init, AWS Copilot sets up an Amazon Elastic Container Registry (Amazon ECR) repository and registers your service to AWS Systems Manager Parameter Store. The CLI also takes a peek at your Docker engine to see what platform (OS/Architecture) you’re on, and looks for any port and health check details. Because it is not the default platform (linux/amd64), AWS Copilot surfaces your Windows platform in the manifest generated in this step. The CLI also adjusts values automatically in your manifest (adjusting CPU and memory values, disabling exec and efs) to accommodate Windows. The manifest file is stored in the copilot\ directory, created in the copilot app init step, as copilot\<your service\job name>\manifest.yml. This is where you can do a huge amount of configuration depending on your specific needs!

The following is the manifest that was generated for our example app (copilot\joker\manifest.yml): 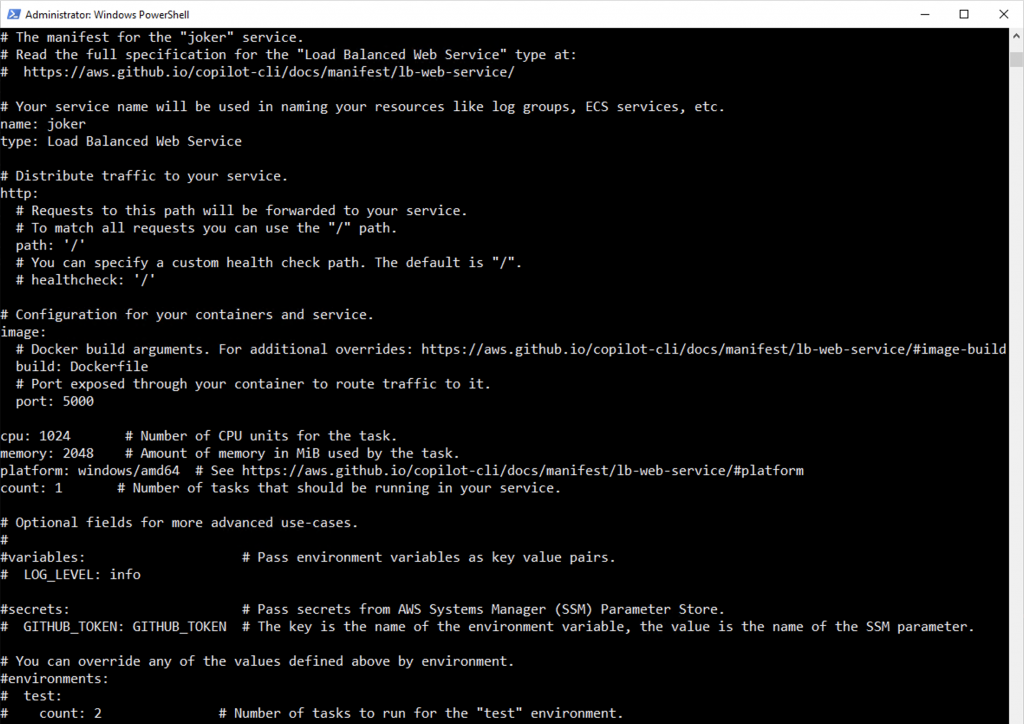 Options:
As you can see, there are many fun bells and whistles to play with in the manifest. There are even more possibilities than those that appear by default in the manifest: AWS Auto Scaling, target group health checks, source IP allow lists, and environment-specific overrides, to name a few. Review the documentation specific to your service type to learn more. Windows users can see the previously mentioned platform field in their manifests – this is where you can change your OSFamily. To do so, change the platform value from the generated string, which defaults to WINDOWS_SERVER_2019_CORE, to WINDOWS_SERVER_2019_FULL.

is equivalent to this map format:

You’ve come to expect the option to pass in required fields with flags, and copilot svc init is no different. Besides the flags for skipping prompts, there is also one for specifying the location of an existing Docker image. AWS Copilot won’t look for your Dockerfile to build and push a new image to Amazon ECR if you’d rather use an existing one.

AWS Copilot offers two additional ways to run containers: scheduled jobs, which are tasks that are triggered by an event, and one-off tasks. As with service workloads, the CLI will provision the right amount of AWS resources required for your purposes.

Add persistence to your application with copilot storage init

What you’re doing:
This optional step, which is not included in copilot init, enables you to add persistence (DynamoDB table, Amazon Aurora Serverless cluster, or Amazon S3 bucket) to your app. After you make naming and organizational decisions, take the generated environment variable and use it within your code, so that your container can reference the storage resource. Note that while AWS Copilot has Amazon Elastic File System (Amazon EFS) capabilities, Amazon EFS is not Windows-compatible.

What AWS Copilot is doing:
When you run the copilot storage init command, AWS Copilot creates an addons subdirectory in your copilot directory. You’ll see a new yaml file with the name you chose for your storage resource (Jokes.yml in our example). This AWS CloudFormation template will create the database or bucket you have designated, and will grant your service access to your resource.

Here is the template that was generated for our database (copilot\joker\addons\Jokes.yml):

What you’re doing:
Sitting back and watching the show.

What AWS Copilot is doing:
Because the manifest indicates that you’re building a Windows container, AWS Copilot passes that information on to Docker when running docker build. The CLI then pushes the built image to Amazon ECR.

Based on the type of service you chose to build in the copilot svc init step, and the configuration in your manifest, AWS Copilot provisions the appropriate resources to get you up and running, without extraneous expense.

In our example, we’re building an internet-facing Load Balanced Web Service. At deploy time, AWS Copilot spins up an Application Load Balancer to distribute incoming traffic, security groups to control traffic, and more. It does this on top of an Amazon ECS service, the heart of the whole operation. If you selected Worker Service, for example, you would get an Amazon ECS service with Amazon SQS for pub/sub capabilities. To see exactly what resources the CLI has generated for your service, run copilot svc show --resources. Similarly, to see what resources were spun up for your environment, use the copilot env show --resources command.

Not only does AWS Copilot tailor resources to the type of service, the CLI also considers the interplay of services within an app. For instance, all services come with Service Discovery, so a Load Balanced Web (frontend) Service can find and communicate with a Backend Service via private endpoints. The Backend Service itself doesn’t require any internet-facing endpoints. And remember all the specs in your manifest? AWS Copilot looks at the functionality you’ve requested and determines which resources you need to make those specifications happen. If you’ve indicated that you’d like tasks launched in private subnets, AWS Copilot will add NAT Gateways to an AWS Copilot-generated VPC. If you’ve added a secret, Amazon ECS Agent will work with AWS Systems Manager Parameter Store to pass the secrets as environment variables to your service securely.

Among the environment variables injected into your container, is the name of the storage resource you specified if you ran the previous command, copilot storage init. For our joker app, JOKES_NAME is the environment variable for our DynamoDB table. When you run copilot svc deploy, AWS Copilot creates your database or S3 bucket, creates a nested CloudFormation stack with the addons template (previous example), and grants your service access to the storage resource via an IAM Managed Policy.

copilot svc deploy is also the step at which AWS Copilot populates the Amazon ECS task definition’s OSFamily and PlatformVersion fields with Windows-specific values. For developers already familiar with Amazon ECS and AWS Copilot, the transition to launching Windows containers is seamless, as the workflow is identical–all platform-related business happens behind the scenes.

Options:
One useful flag available with copilot svc deploy is --force, which forces subsequent deployments even when there are no detected CloudFormation changes.

Our app is deployed! copilot svc deploy returned a URL at which we can view our Load-Balanced Web Service. You have the option to use an existing domain when you run app init, or use an alias for your service. Missed your URL? Access it, and more, with copilot svc show. 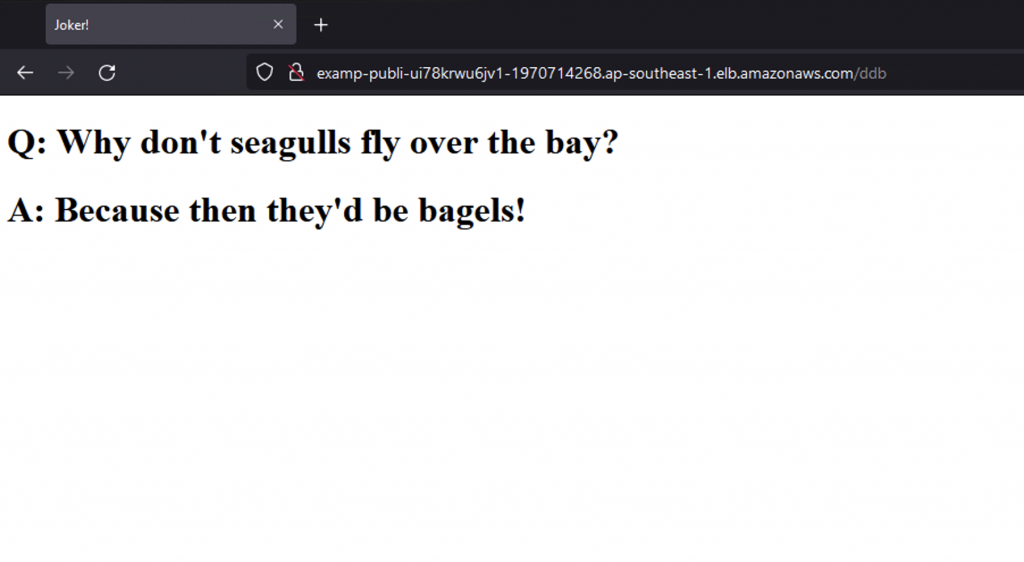 What AWS Copilot is doing:
This command deletes your app and all resources associated with it. (Note: your copilot subdirectory and its contents remain after you run copilot app delete.)

Options:
For the less commitment-phobic among us, there is a --yes flag that skips the “Are you sure?” confirmation prompt.

The AWS Copilot CLI guides you in building and deploying your projects, from simple, one-off tasks to multi-microservice apps with databases, sidecar containers, and more! AWS Copilot is an open-source tool and we encourage you to get involved by creating GitHub issues or joining the conversation on Gitter. See you there!