At some point in any migration, however, the bandwidth of your network becomes a limiting factor. It’s simple physics. If you want to move 5 terabytes from your on-premises network to the AWS Cloud over your 10-Gbps network… no problem. Increase that by an order of magnitude or two, or work with a slow, busy network. Suddenly you can spend days, weeks, or months waiting for your data. Maybe you are only trying to move a 500-GB database. But your network is painfully slow, because you are in a remote location or because there are geospecific network challenges at the time of the migration. Or perhaps you have many smaller databases to migrate that together add up to a significant size.

These scenarios and others like them are where AWS Snowball Edge and its brand-new integration with AWS DMS come in.

AWS Snowball Edge is a service and also a physical storage appliance from AWS that enables you to move petabytes of data to AWS. It helps eliminate challenges that you can encounter with large-scale data transfers, including high network costs, long transfer times, and security concerns. You know that you can order a book or a Crock-Pot on Amazon Prime, knowing it will show up at your door two days later. Similarly, you can order several AWS Snowball Edge appliances from your AWS Management Console. They show up at your data center a few days later, each with a secure capacity of 100 TB.

Some of the salient features of this integration architecture are the following:

A few notes about working with AWS Snowball Edge and AWS DMS:

You can use the steps following to migrate a database or multiple databases using the new integration of AWS DMS and AWS Snowball Edge.

Preparation
Preparation involves setting up prerequisites, creating an Amazon S3 bucket, and getting and configuring your AWS Snowball Edge.

Step 1: Create an Amazon S3 bucket (staging S3)
When you’ve set up the source and target databases as described in the documentation, you create a bucket in Amazon S3. This bucket is also called the “staging S3.”

This bucket acts as a temporary staging area for existing data and ongoing transactions during a database migration process.

When database migration is complete and cutover to the target database is done, you can delete this staging S3 bucket.

This bucket should be in the same AWS Region as the target database. Also, AWS DMS and AWS SCT need AWS Identity and Access Management (IAM) roles to access this bucket.

When AWS Snowball Edge device is connected to your network, you install the Snowball client. You then unlock the Snowball by downloading the manifest file and an unlock code from the AWS Management Console, as shown in the following command.

Run the following command on the Snowball client to get the local access key and local secret key to use following.

In the commands preceding, replace the IP address and unlock code with your AWS Snowball Edge configuration information.

Configuration
Next, configure your migration by taking the following steps.

Step 1: Configure AWS SCT
In the first step of configuration, configure the global settings for AWS SCT. These settings include the AWS service profile and the database drivers for the source and target databases.

Along with the AWS access key and secret key, you also need to specify the Amazon S3 bucket (the staging S3) that was created in the earlier step. 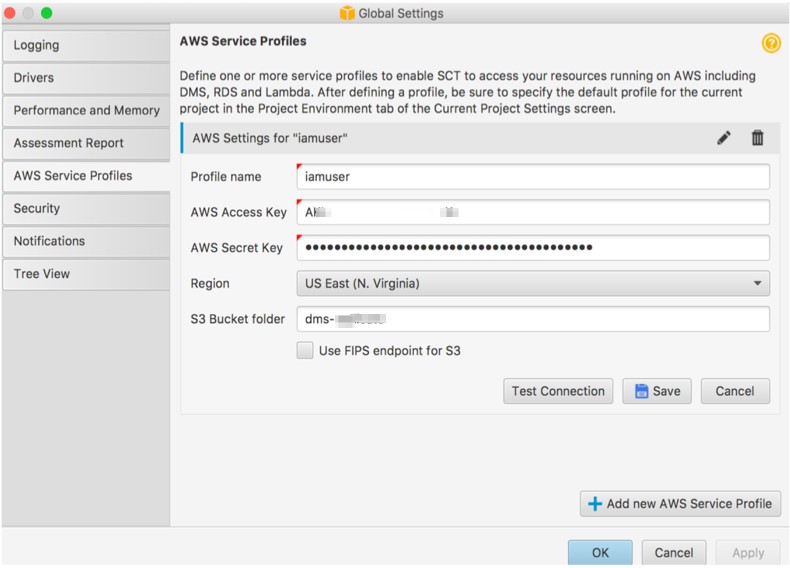 You size the Linux machine that you use depending on a couple of considerations. These considerations are the number of tasks to run on this machine and the throughput requirements for data migration from the source database to the AWS Snowball Edge device.

The AWS DMS replication agent is delivered as a downloadable .rpm file in the SCT package. The installation steps are as follows.

You install the ODBC drivers required for the source databases on the replication instance. For information on how to configure these drivers for specific source and target databases, see the database documentation.

For example, to configure MySQL drivers, run the commands following.

After executing the preceding commands, make sure that the /etc/odbcinst.ini file has following contents.

For information on how to create an AWS DMS remote replication instance using the AWS Management Console, see the AWS DMS blog mentioned earlier or the AWS DMS documentation.

Execution
Now that you’ve set up configuration, you can run the migration by using the following steps.

Specify the IP address of the host, the port number, and the password used for AWS DMS replication agent configuration, as shown following. 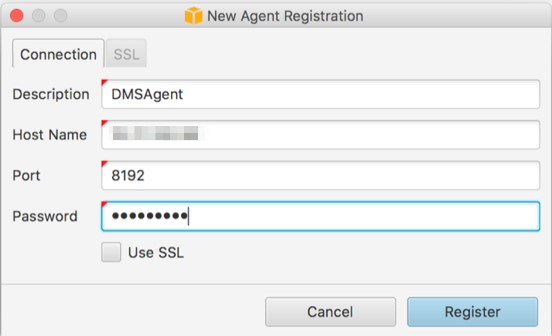 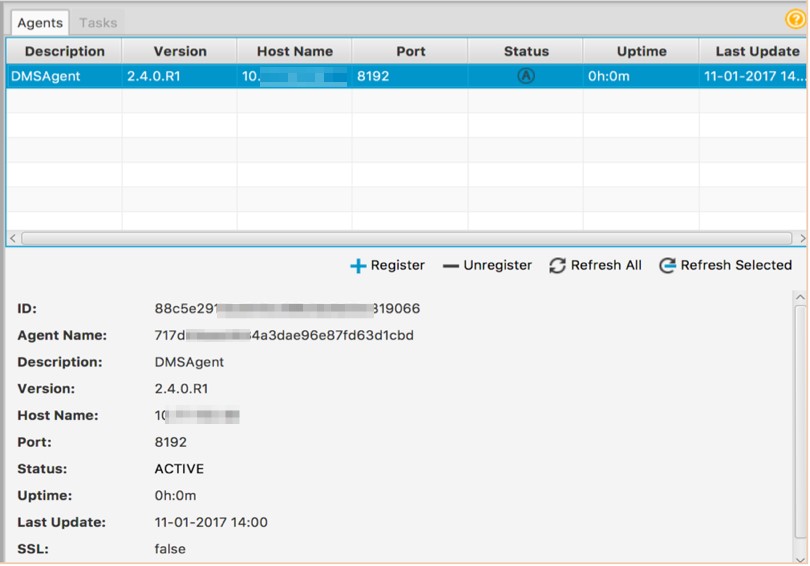 The replication agent creates and tests the connections to the source database, the AWS Snowball Edge device, and the staging S3 bucket. It also reports the status of the Snowball Edge and the Snowball import or export job in the AWS SCT UI.

The AWS DMS replication agent is an independent process running on Linux and doesn’t depend on the AWS SCT.

Step 2: Create Local and DMS Tasks in AWS SCT
You can now create tasks on the local and remote AWS DMS replication instances. AWS DMS tasks are the actual workhorses that do the data migration.

You create local and remote tasks in a single step from the AWS SCT UI as described following.

Details such as agents, replication instances, IAM roles, AWS import job names, and so on, are prepopulated from AWS SCT profile configurations and your AWS DMS resources in the AWS Region. 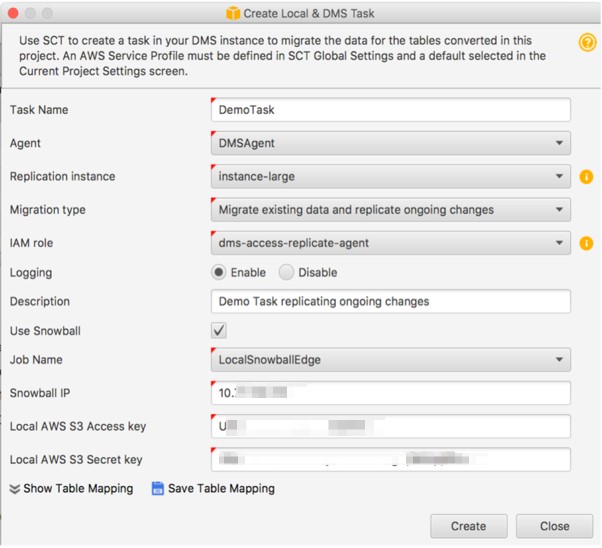 As a result, two tasks are created, which you can see in the AWS SCT UI and DMS console: 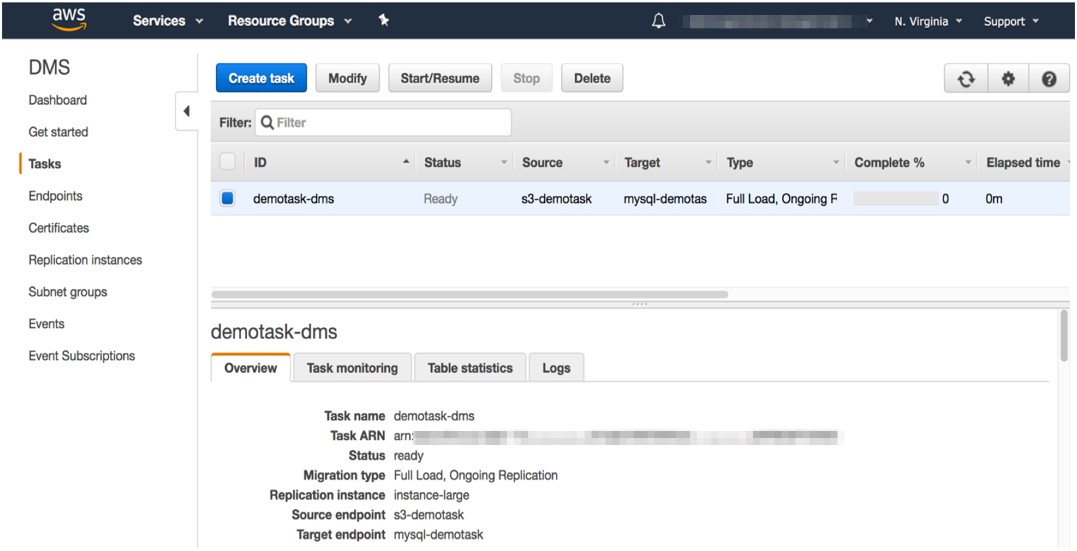 Step 3: Test the connections, start the tasks, and monitor progress
You are now ready to test the connection to the source database, AWS Snowball Edge device, and staging S3 from AWS DMS Replication Agent instance. To do so, choose Test on the AWS SCT Tasks tab.

Doing this also tests the connectivity to the staging S3 and the target database from the AWS DMS remote replication instance.

Unless the test for all these tasks is successful, you can’t start the tasks.

The AWS DMS task remains in the running state in the console until the AWS Snowball Edge device is shipped to AWS and the data is loaded into your staging S3 area. 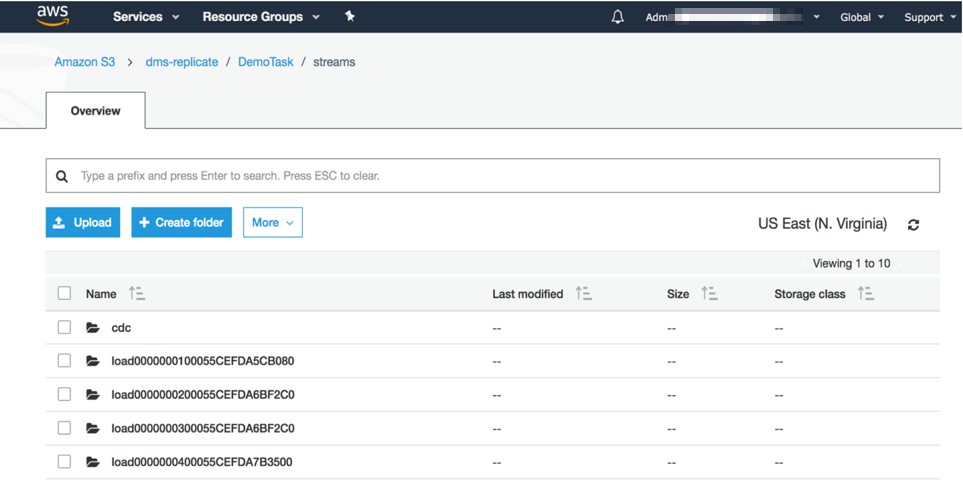 As mentioned, when the AWS Snowball Edge is attached at AWS, the AWS DMS task automatically starts loading existing data into the target database (full load). The task then applies the change data capture (CDC) logs for ongoing replication.

When all existing data is migrated and the ongoing replication process brings both the source and target databases up to the same transaction level, you can cut over to the target database. Your applications can now point to the new database on AWS.

Congratulations! You have migrated your multiterabyte database or databases to AWS using AWS DMS and AWS Snowball Edge integration.

We also want to highlight the fact that you can migrate your database in this “push” model without using the AWS Snowball Edge device too! In this case, the local task or tasks copy the existing data from the source database to the staging S3, including the ongoing database transactions.

The DMS tasks on the AWS DMS remote replication instance then load existing data immediately on the target database. The tasks start loading the ongoing transactions once existing data is migrated. You can also use this staging S3 flow to verify that the entire process works well by testing on a small table or two before you order your Snowball Edge.

Summary
Many AWS features and services arise from AWS teams carefully listening to real-life customer experiences and needs. This new integration between AWS DMS and AWS Snowball Edge is an excellent example of implementing the ideas that emerge from that process. In turn, the implementation opens up new possibilities and opportunities for AWS customers.

For more information about this feature, read the AWS documentation. Let us know your feedback.

Ejaz Sayyed is a partner solutions architect with the Global System Integrator (GSI) Team at Amazon Web Services. He works with the GSIs on AWS cloud adoption and helps them with solution architectures on AWS. When not at work, he likes to spend the time with his family which also includes two kids, Saad and Ayesha.

Mitchell Gurspan is a senior solutions architect at Amazon Web Services. He is an AWS Certified Solutions Architect – Associate and is the author of a book on database systems. Mitchell resides in South Florida with his wife and two children. He enjoys tennis, teaches martial arts, and enjoys skiing when time allows.

Special thanks to Alex Gershun, an AWS DMS Software Development Engineer for his inputs.