At some point in any database migration, the bandwidth of your network becomes a limiting factor. Without available high-speed internet links, it can take months to transfer large amounts of data. For example, 100 terabytes of data takes more than 100 days to transfer over a dedicated 100-Mbps connection. Many times, if you are in a remote location or have other network challenges, a migration of a relatively small 500-GB database can be considerably slow. Additionally, the cumulative size of many simultaneous smaller database migrations can also amplify this challenge.

Another common scenario that can hinder or delay a database migration project is the lack of outside access to the database itself. You might find yourself all set to start your database migration from your source database, only to find that you’re not permitted access outside your corporate network. The scenarios described, and others like them, are where the AWS Snowball service and its integration with AWS Database Migration Service (AWS DMS) can yield its greatest advantages in migrating large database environments offline.

More than 200,000 databases have been migrated to AWS using AWS Database Migration Service (AWS DMS), either as a one-time migration or with ongoing replication. AWS DMS works with the AWS Schema Conversion Tool (AWS SCT) to significantly simplify and expedite the database migration process in a low-cost, highly available manner. These tools work in concert with an AWS Snowball device installed in your datacenter. The device enables you to perform a database migration locally, then ship the AWS Snowball device back to AWS for import into your cloud storage target. This process alleviates constraints in network bandwidth that commonly slow or derail cloud migrations.

In this blog post, we’ll provision AWS services to receive your data, configure an AWS Snowball device, and configure the migration jobs required to actually move your data.

AWS Snowball is a service of ruggedized physical storage and computing devices, such as the AWS Snowball Edge Storage Optimized device, that enable you to move petabytes of data to AWS. The service helps overcome challenges that you can encounter with large-scale data transfers, including long transfer times, a lack of usable bandwidth, and security concerns. You know that you can order a book or consumer product on Amazon Prime, knowing it shows up at your door two days later. Similarly, you can order a Snowball Edge device from your AWS Management Console and it arrives at your data center a few days later with approximately 80 TB of usable encrypted storage.

The local replication agent and the SCT are installed on virtual machines or bare-metal hosts. The DMS agent is only supported on Red Hat Enterprise Linux versions 6.2 through 6.8, 7.0, and 7.1 (64-bit), and SUSE Linux version 12 (64-bit). See AWS DMS documentation for more details.

Some of the salient features of this integration architecture are:

A few notes about working with Snowball Edge and AWS DMS:

You can use the following steps to migrate a database or multiple databases using the new integration of AWS DMS and Snowball Edge.

The preparation involves setting up prerequisites, creating an Amazon S3 bucket, and getting and configuring your Snowball Edge. The step-by-step instructions and the best practices are covered in the Snowball Edge Migration Guide. You must obtain the Snowball Edge access key and secret key by following these detailed procedures.

When you’ve set up the source and target databases as described in the documentation, you create a bucket in Amazon S3. This bucket is also called “staging S3.”

This bucket acts as a temporary staging area for existing data and ongoing transactions during a database migration process. When database migration is complete and cutover to the target database is done, you can delete this staging S3 bucket. This bucket should be in the same AWS Region as the target database. Also, AWS DMS and AWS SCT need AWS Identity and Access Management (IAM) roles to access this bucket.

Order and configure the Snowball Edge

Next, you create an AWS Snowball job through the AWS Management Console and order your Snowball Edge device. As part of this step, you specify the Amazon S3 bucket (staging S3) you created in the previous step.

Next, configure your migration by taking the following steps:

In the first step of configuration, configure the global settings for AWS SCT. These settings include the AWS service profile and the database drivers for the source and target databases.

Ensure you have added these elements to the Service Profile (see AWS DMS documentation for more details on configuring AWS SCT to use the Snowball Edge): 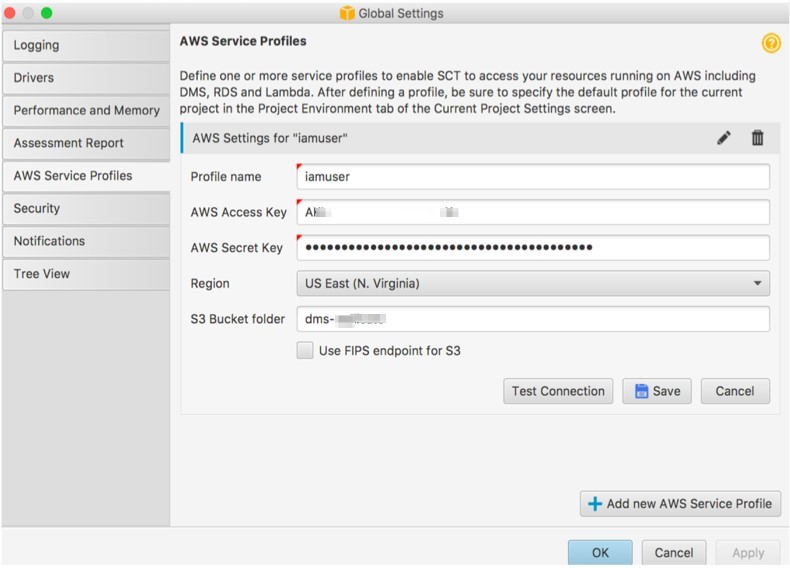 Next, click Test Connection to ensure all your profile values are correct and that all test show a status of Pass. If the test passes, choose OK and then OK again to close the window and dialog box. 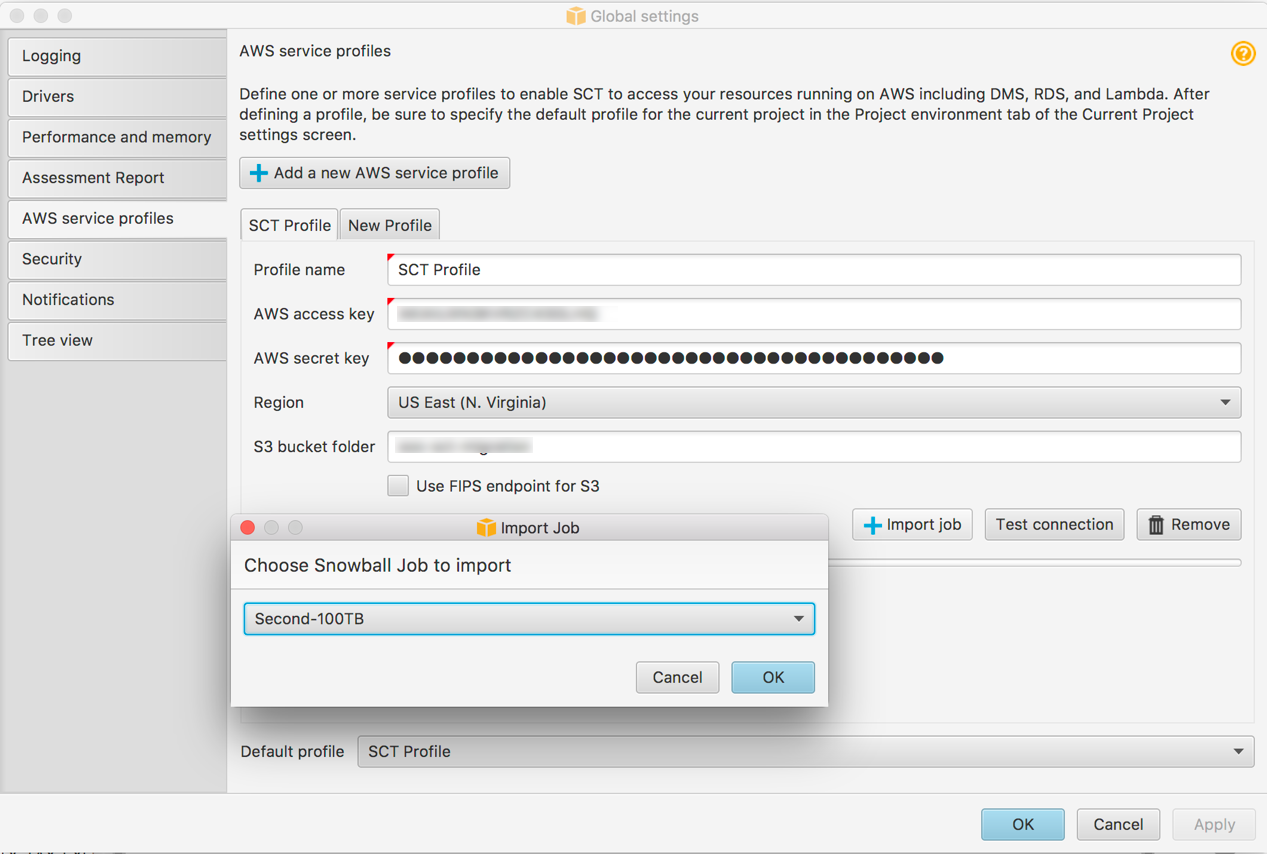 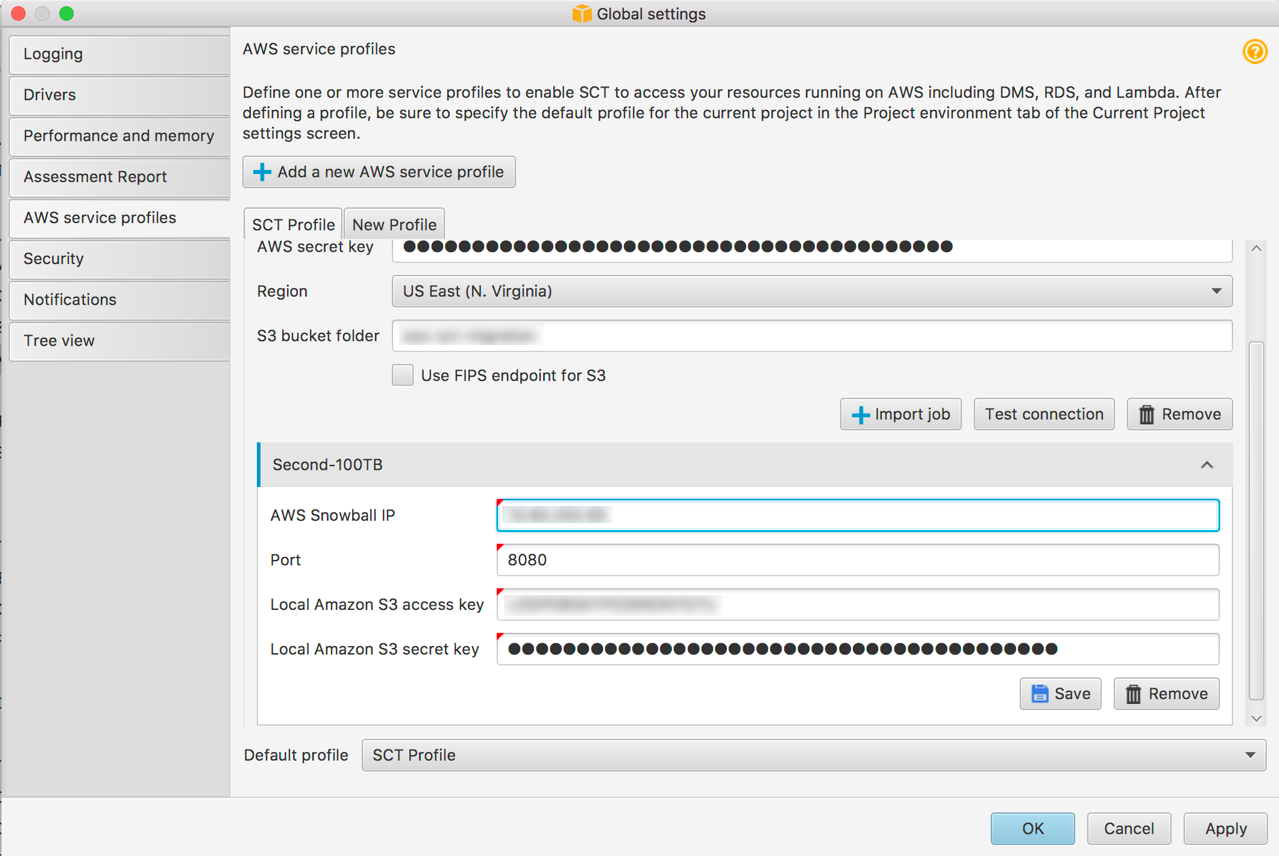 The ODBC drivers required for the source databases on the replication instance. For example, to configure MySQL drivers on Linux, run the following commands. For information on how to configure these drivers for specific source and target databases, see the database documentation.

After executing the preceding commands, make sure that the /etc/odbcinst.ini file has the following contents:

You size the instance that you use depending on a couple of considerations. These considerations are the number of tasks to run on this machine and the throughput requirements for data migration from the source database to the Snowball Edge device.

To install the AWS DMS agent, locate the “dmsagent” directory in the location where the AWS SCT installation files were decompressed. Install the agent appropriate for your operating system. Detailed installation steps are documented here.

For information on how to create an AWS DMS remote replication instance using the AWS Management Console, see the AWS DMS documentation.

Now that you’ve set up configuration, you can run the migration by using the following steps:

In this step, you connect to the replication agent using the host name, port number, and password you provided in configuration step 3.

Specify the IP address of the host, the port number, and the password used for the AWS DMS replication agent configuration, as shown in the following screenshot: 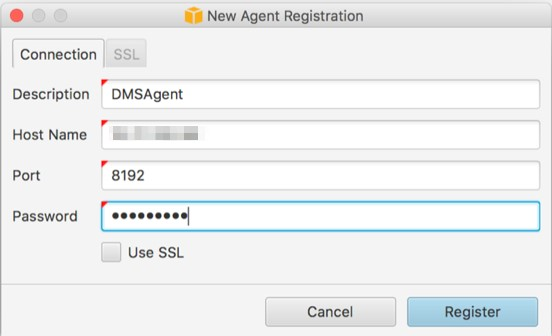 This is how it looks after registration: 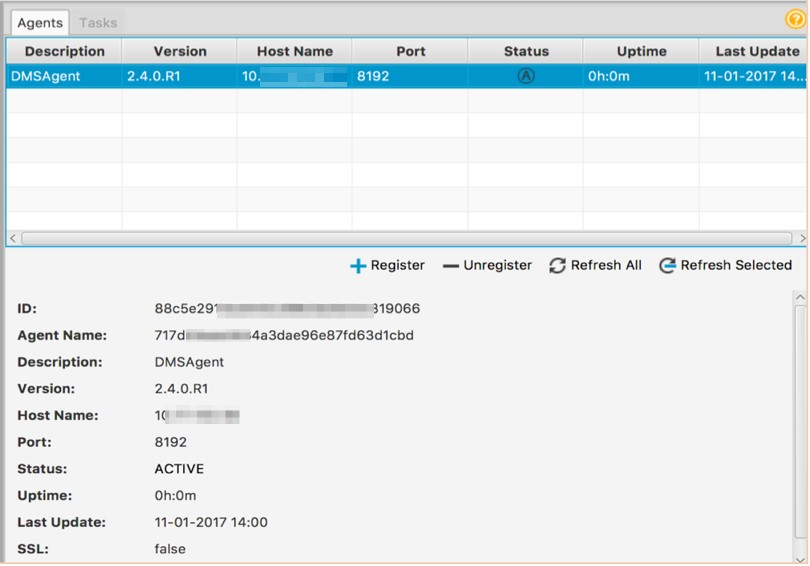 You can now create tasks on the local and remote AWS DMS replication instances. AWS DMS tasks are the actual workhorses that conduct the data migration.

The following steps show you how to create local and remote tasks in a single step from the AWS SCT UI: 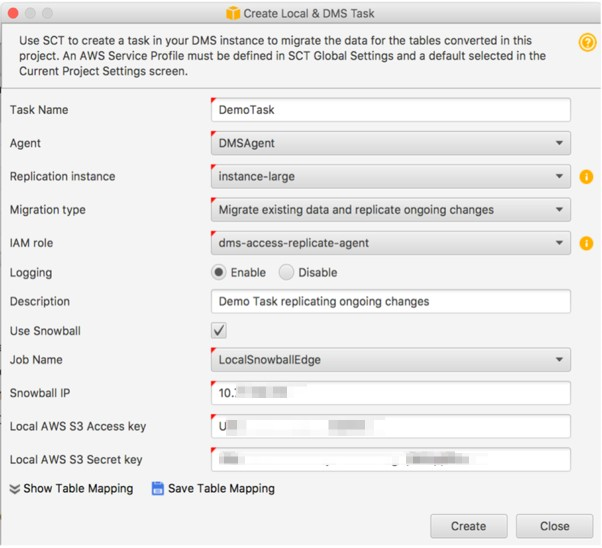 As a result, two tasks are created, and you can see them in the DMS console (and the AWS SCT UI, as shown in the next section): 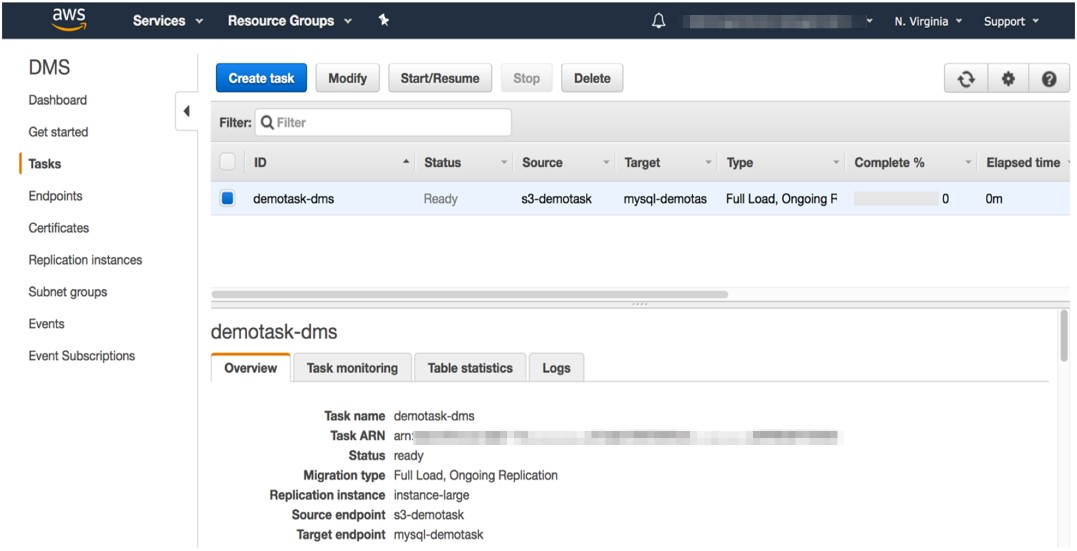 Step 3: Test the connections, start the tasks, and monitor progress

You are now ready to test the connection to the source database, Snowball Edge device, and S3 bucket from the AWS DMS Replication Agent instance. To do so, choose Test on the AWS SCT UI Tasks tab.

Doing this also tests the connectivity to the staging S3 bucket and the target database from the AWS DMS remote replication instance.

Unless the test for all these tasks is successful, you cannot start the tasks.

The AWS DMS task remains in the running state in the console until the Snowball Edge device is shipped to AWS and the data is loaded into your staging S3 area. 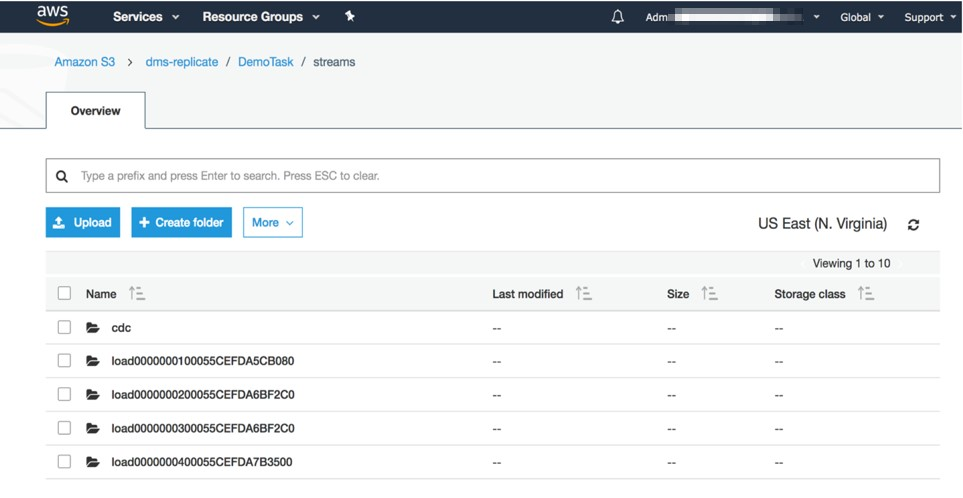 As mentioned, when the Snowball Edge is sent to AWS, the data is imported to the staging S3 bucket. There, the AWS DMS task automatically starts loading existing data into the target database (full load). The task then applies the change data capture (CDC) logs for ongoing replication. You can see the progress of the replication tasks in the following screenshot:

When all existing data is migrated, and the ongoing replication process brings the source and target databases to the same transaction level, you can cut over to the target database. Your applications can now point to the new database on AWS.

Congratulations! You have migrated your multi-terabyte database or databases to AWS using AWS DMS and Snowball Edge integration.

We want to highlight the fact that you can migrate your database in this “push” model without using the Snowball Edge device too! In that case, the local task or tasks copy the existing data from the source database to the staging S3 bucket, including the ongoing database transactions.

Additionally, by locating the extraction logic closer to the source, you can gain efficiencies in Change Data Capture (CDC). For instance, if your use case only requires migrating a subset of database tables in a highly active source database, DMS can filter out extraneous changes before transmitting to AWS. This procedure could significantly lower the network bandwidth required to migrate your data.

The DMS tasks on the AWS DMS remote replication instance then load existing data directly to the target database. The tasks start loading the ongoing transactions once existing data is migrated. You can also use this staging S3 flow to verify that the entire process works well by testing on a small table or two before you order your Snowball Edge.

As part of this migration project, you have deployed resources in your on-premises data center to run the local replication instance and the DMS Schema Conversion Tool. You have also deployed additional instances and a staging S3 bucket in the cloud. These resources will incur costs as long as they are in use. Be sure to remove all unwanted resources and clean up your work when you have finished with the migration.

Many AWS features and services arise from AWS teams carefully listening to real-life customer experiences and needs. This integration between AWS DMS and Snowball Edge is an excellent example of implementing the ideas that emerge from that process.

After following the procedure discussed, we were able to migrate a database hosted on-premises to an AWS managed database service (Amazon RDS) while minimizing the network footprint that such a migration typically consumes. This procedure enables customers to quickly and securely migrate databases from on-premises environments that have limited connectivity to the internet. The AWS Database Migration services and the Snowball Edge devices eliminate the need for on-premises shared-storage for staging database files before migration. Also, this solution does not require major changes to your network and access policies. You benefit from increased security, unlimited scale, and cost savings by migrating your databases to the AWS Cloud. Given all of these advantages, your teams can focus on developing new products and capabilities that benefit your organization, rather than dealing with the operational headaches of typical database migrations.

For more information about this feature, read the AWS documentation. Please consider leaving a comment below if you have any questions or feedback, thanks!

This blog is an update to a post by Ejaz Sayyed and Mitchell Gurspan in 2017; thanks to them for their prior work.