Enterprise customers who are currently running on-premises, mission-critical applications on commercial databases are looking for cost-efficient, managed database service offerings. Amazon RDS is one of the target platforms for the relational database workload migration. RDS provides resizable capacity and manages time-consuming and undifferentiated heavy lifting administration tasks. For large-scale database migrations, there is a need for a scalable and effective solution to right-size a target RDS DB instance for a large number of databases.

In this post, we discuss the process for right-sizing DB instances at scale based on on-premises Oracle performance metrics. We show how to use Python and SQL scripts to collect the Oracle performance metrics from on-premises databases and how to use AWS Glue and Amazon Athena for data analysis and recommendations regarding DB instance size. This solution works for the DB instance sizing, with the scope ranging from one database to many databases.

To discover the on-premises Oracle workload, a SQL script is developed to query the Oracle Automatic Workload Repository (AWR) for hourly I/O, CPU, and memory usage statistics. A Python script reads from an input file that contains a list of databases to be discovered and loops through each database to run the SQL script. A .csv output file is generated for each database.

The target is to collect at least one month of performance metrics to obtain a better estimation of DB instance size. If AWR retention is set to less than one month, the scripts can be run multiple times. All the scripts are installed on an Amazon EC2 Linux instance and are executed from this central location. The Python script starts a SQL*Plus session and connects to Oracle databases remotely from the EC2 instance.

The workload output files are uploaded to an Amazon S3 bucket. Athena, an easy-to-use, serverless interactive query service, is used to analyze the workload data in the S3 bucket. Large-scale datasets in S3 can be quickly analyzed in Athena using standard SQL after the schema is defined.

Athena is integrated by default with AWS Glue, a fully managed extract, transform, and load (ETL) service used to crawl workload data in S3 and discover the schema. The crawlers are created in AWS Glue to access the data in the S3 bucket, extract metadata, and create table definitions in the AWS Glue Data Catalog. To compare the on-premises database workload with the DB instance capacity, upload a .csv file to the same S3 bucket for lookup. The .csv file contains the target DB instance type, vCPU, memory, and maximum bandwidth configuration. For more information, see Amazon RDS hardware specifications.

The logic used for right-sizing DB instances based on Oracle performance metrics is coded in an Athena view:

The following diagram illustrates the process of the solution covered in this blog:

Here’s how the process works:

The code and the AWS CloudFormation templates to implement this solution can be found in the amazon-rds-sizing-sample GitHub repo.

To follow along with this solution, you need the following resources:

The first AWS CloudFormation template creates an EC2 instance and an S3 bucket.

On the AWS CloudFormation console, choose Create stack. In the Select Template section, under Specify template, select Upload a template file. Select Choose File to upload the instancesizing_CFN1.yaml file, and then choose Next. For more information, see Step 3: Create the Stack.

On the Specify Details screen, provide values for the following fields:

In the Resources tab for your stack, find Type AWS:EC2:Instance, and choose the Physical ID.

On the EC2 console, choose Connect. Follow the instructions to SSH to this EC2 instance as ec2-user.

Locate the zip file instancesizingtools.zip downloaded from the amazon-rds-sizing-sample GitHub repo and upload it to the directory /home/ec2-user on the EC2 instance. To unzip the file, run the following command:

The /instancesizingtools directory is created on the EC2 instance, which contains the performance metrics collection scripts. The structure of this directory is as follows:

On the EC2 instance, use the following commands to verify:

Create an Oracle user account with the privileges “create session” and “select_catalog_role” in the on-premises Oracle databases.

On the EC2 instance, create entries in $ORACLE_HOME/network/admin/tnsnames.ora with the connection information for the on-premises Oracle databases. A sample TNS entry is populated in tnsnames.ora for reference.

Update the file /home/ec2-user/instancesizingtools/scripts/dblist.txt with the Oracle database username, password, and tnsnames entry using the following format for all the databases to be analyzed. Each line represents one database. Oracle Instant Client 18.3 is installed using the AWS CloudFormation template. To connect to Oracle Database 10g, install Oracle instant client 12.1.0.2 manually.

To collect the database performance metrics, run the following Python script on the EC2 instance:

To recursively copy new and updated performance metrics output files from the output directory on the EC2 instance to the S3 bucket, run the following s3 sync command on the EC2 instance. Replace <S3bucketname> with the bucket name provisioned in Step 1.

S3 cp command is used to copy the local file rds_instance_type.csv to the S3 bucket. Replace <S3bucketname> with the bucket name provisioned in Step 1:

A sample of the contents of the S3 bucket folders s3://<S3bucketname>/performancedata/ and s3://<S3bucketname>/instancelookup/ after the database workload output files are uploaded is shown in the following screenshots. The data in these two folders is crawled by AWS Glue crawlers. 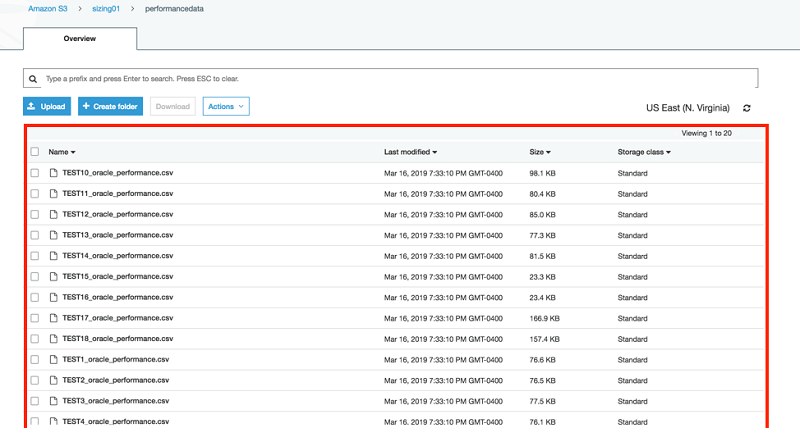 Repeat the stack creation process describled in Step 1 for the instancesizing_CFN2.yaml file. On the Specify Details page, provide the following values:

When the crawler run is complete, check the table definition in the Athena console. The table schema definition is shown in the following screenshot.

Repeat the stack creation process described in Step 1 for the instancesizing_CFN3.yaml file.

In the Athena console, on the Saved Queries tab, choose v_instance_sizing.

The named query is ported to a Query Editor window. To create the view v_instance_sizing, choose Run query.

In the Athena console, on the Query Editor tab, open a new query tab and query the view v_intance_sizing using the following command:

For each source Oracle database, the result shows the following:

Choose Download. The result is in CSV format, as shown in the following screenshot.

In this post, we showed you a complete solution for right-sizing RDS DB instances based on Oracle performance metrics. This solution can be used to analyze a large number of databases and establish a baseline of infrastructure in AWS for your database migration workload.

Michelle Deng is a Sr. Cloud Database Architect at Amazon Web Services. She works with AWS customers to provide guidance and technical assistance about database migrations and Big data projects.