AWS has a collection of tools designed to help developers build, test, configure, and release cloud-based applications for mobile devices. This blog post shows you how to leverage some of those tools and integrate third-party build tools like Jenkins into a CI/CD Pipeline in AWS for iOS app development and testing.

A new commit to the source repository triggers the pipeline. The build is done on a Jenkins server, and the build artifact from Jenkins is passed to the test phase, which is configured with AWS Device Farm to test the application on real devices. AWS CodePipeline provides the orchestration and helps automate the build and test phases. The CodePipeline continuous delivery process is illustrated in the following screenshot. 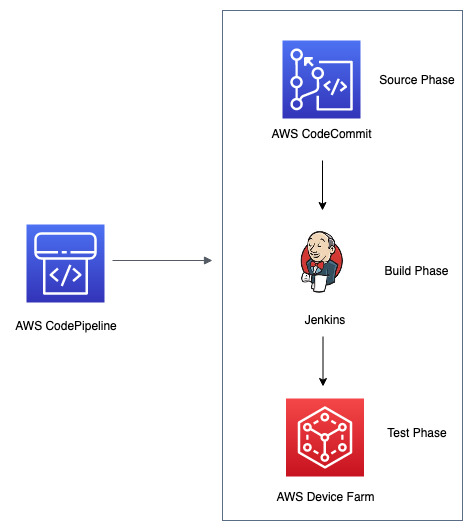 Ensure you have the following prerequisites set up before beginning:

This example uses a sample iOS Notes app which we have hosted in an AWS CodeCommit repository, which is in the source stage of the pipeline.

Jenkins can be installed on macOS using a homebrew package manager for macOS with the following command:

You can also configure Jenkins to start as a service on startup with the following command:

On a browser on your local machine, visit http://localhost:8080. You should see the setup screen shown in the following screenshot: 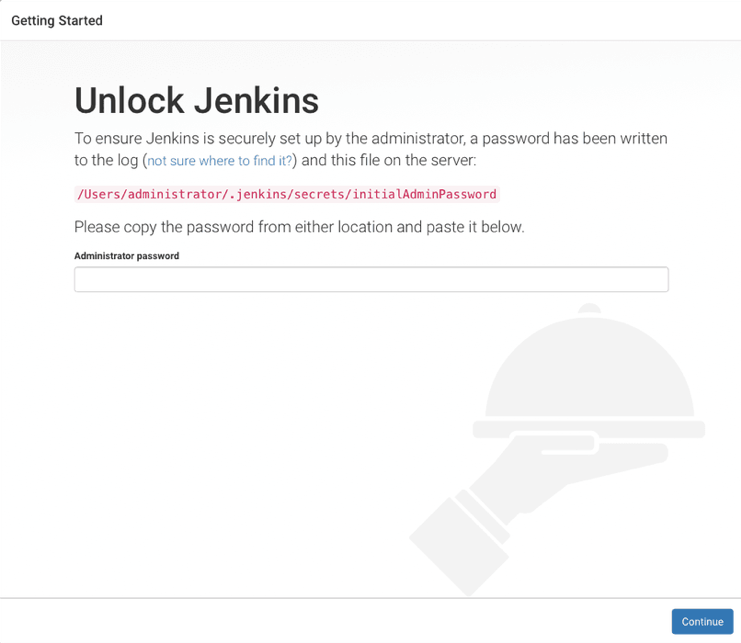 1. Grab the initial admin password from the terminal by typing:

3. Make some changes to the config file to ensure Jenkins is accessible from anywhere, not just the local machine:

To reach Jenkins from the internet, enter the following into a web browser:

6. In the Source Code Management section, select AWS CodePipeline and configure the plugin as shown in the following screenshot. 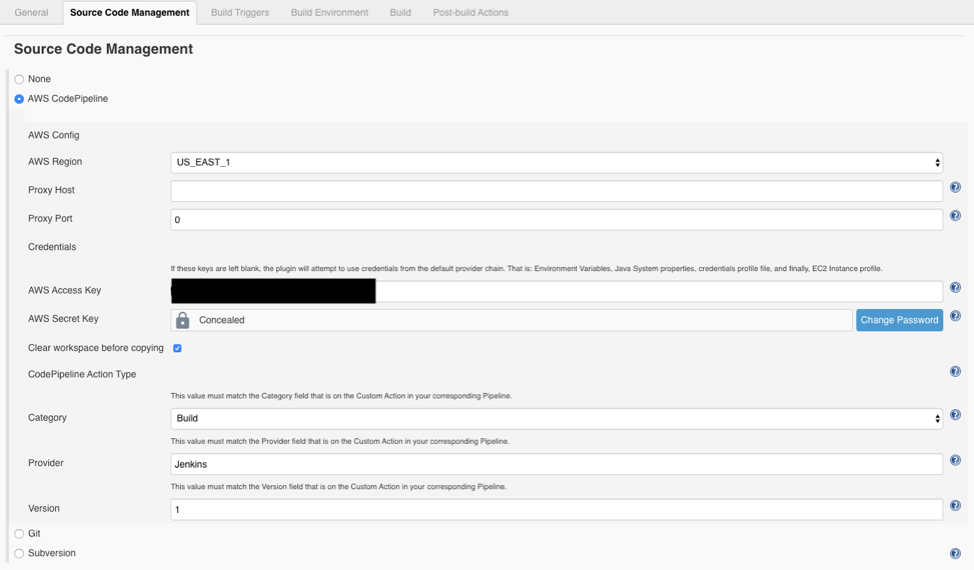 7. Under Build Triggers, select Poll SCM. Enter the schedule * * * * * separated by spaces, as shown in the following screenshot.

9. Under Post-build Actions, select Add post-build action, then AWS CodePipeline Publisher. Fill in the fields as shown in the following screenshot:

11. Retrieve the public IP address for the macOS build server.

In this section, you configure Device Farm to test the sample iOS app on real-world devices.

CodePipeline orchestrates all phases of the example. Each action is represented as a stage. 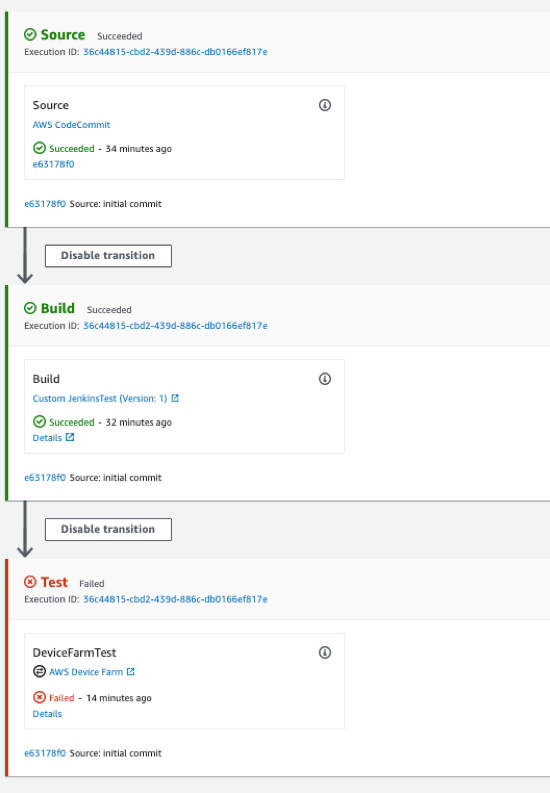 Verify the test on Device Farm

From the pipeline execution, you can see there is a failure in your test. Check the test results:

You can see the source of the failure. To investigate why the test failed, choose each device. The device names on which the app was tested are also shown, such as the OS version and the total duration of the test for each device. You can see screenshots of the test by switching to the Screenshots tab. More information can also be seen by clicking on a device.

Troubleshoot the failure by examining the result in each of the devices on which the test was run to determine what changes are needed in the application. After making the needed changes in the application source code, push the changes to the remote repository (in this case, a CodeCommit repository) to trigger the pipeline again. The following screenshot shows a successful pipeline execution: 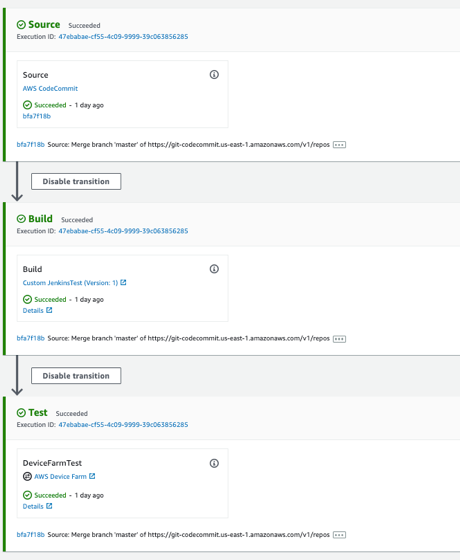 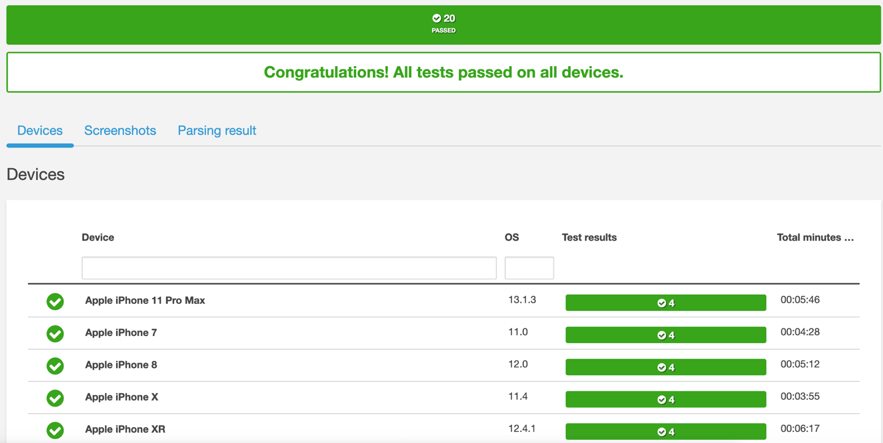 This post showed you how to integrate CodePipeline with an iOS Jenkins build server and leverage the integration of CodePipeline and Device Farm to automatically build and test iOS apps on real-world devices. By taking this approach to testing iOS apps, you can visualize how an app will behave on actual devices and with the automated CI/CD pipeline, and quickly test apps as they are developed.