When migrating applications from a development account to a testing or production account, customers often find that AWS IAM policies or Service Control Policies (SCP) for their applications need significant modification to allow the application to deploy and function correctly. This can be a time-consuming process of discovery and remediation to get an application live in production. It may require a number of security exceptions to production IAM or SCP policies. This blog post demonstrates how to use pyunit to validate permissions across different accounts, allowing customers to find and remediate privilege problems in a consistent manner.

A large financial company, Example Corp., has a migration to AWS underway. It plans to centrally manage all IAM policies and roles across hundreds of accounts. Some of their accounts are project-based, some are environment-based, and others host shared services. Their security team will be the gatekeepers of the thousands of IAM policies and roles that are pre-established and managed separately from the application stacks and teams. Many of these policies are not application specific and are reused across different accounts and environments. IAM policies for their development accounts are less restrictive than those used for their production stacks.

Example Corp. regularly encounters issues deploying their AWS CloudFormation stacks in production. This is due to the more-restrictive IAM permissions of the production account. This leads to manual, retroactive IAM troubleshooting to deploy their production environment, while maintaining a least-privilege approach.

The problem and opportunity

Continuous delivery is a software development practice in which code changes are automatically prepared for release to production. A pillar of modern application development, continuous delivery expands upon continuous integration by deploying all code changes to a testing environment and/or a production environment after the build stage. When properly implemented, developers will always have a deployment-ready build artifact that has passed through a standardized test process.

However, when not properly implemented—a situation usually linked to a poor test process—many deployments end up still being manual. Typically, the IAM policies used by the application being deployed are not tested in the continuous integration and continuous delivery (CI/CD) pipeline. When the developers throw their code over to the production account, denials of requests due to IAM permissions might surface.

Think of an API request as shooting an arrow to meet a target. Hitting the target means the request is allowed, and various policies are barriers that the arrow must pass.

The first potential barrier is explicit denials in any of the policies, such as an s3:ListBucket denial, or one in subsequently evaluated policies. A request starts with a Deny—it’s only allowed if there is an Allow somewhere in the permission policies.

Any explicit Deny from the policies involved with an API call (which could include SCPs, permissions boundaries, permission policies, resource-based policies, and more) is evaluated first. They are at the “explicit deny” level in the following diagram: 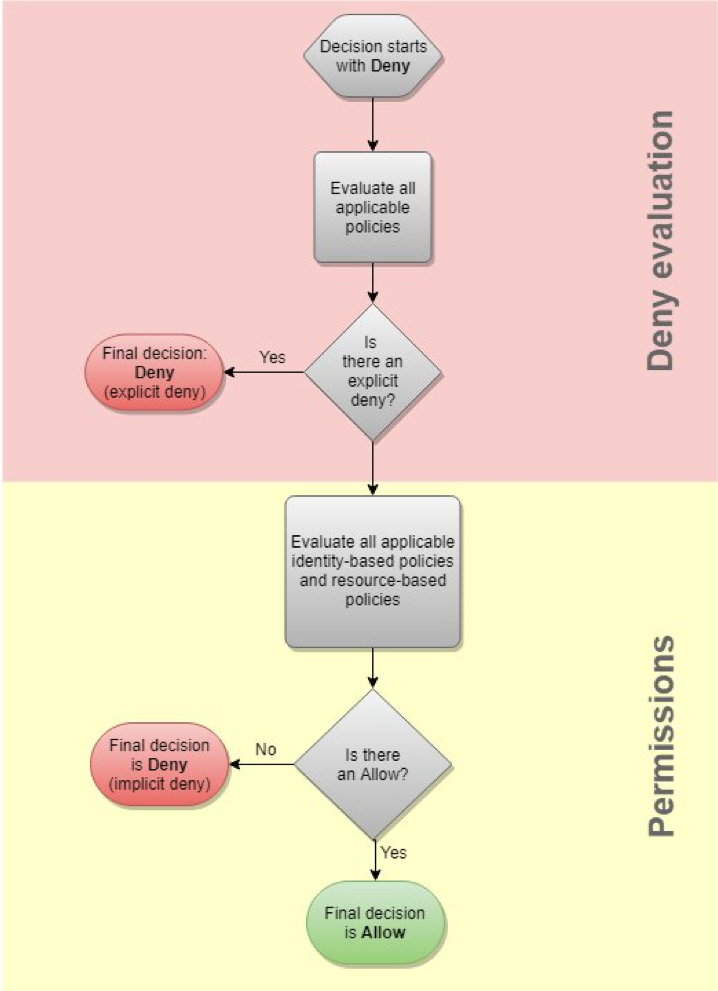 PyUnit provides an easy way to create unit testing programs and unit tests with Python, such as by creating a simple PyUnit script to unit test IAM Policies across environments. The PyUnit test takes a policy or an application and validates it against the target environment to ensure it is possible to grant an application the permissions it needs.

The problem of unit testing IAM policies across multiple accounts can be further broken up into two components:

At the minimum, a simple deployment toolbox consists of:

Example Corp. developers code locally and frequently push changes to AWS CodeCommit. They use the AWS SAM CLI and execute the test suite in their developer accounts. It all works very well for fast deployments and continuous testing, with extremely fast time to value. However, Example Corp‘s production environment is in a different account, which has SCPs set in place for compliance reasons. Multiple times in the past, deployments succeeded in the developer account test suite and broke in production for no apparent reason.

In developer accounts, something like the following code snippet is often used to unblock deployment:

Over-permissive policies are often used in non-production accounts for test purposes to minimize the effort of securing least-privilege access. However, production environments require least privilege. Example Corp. wants to be able to test that the role permissions for an application being deployed work as expected in the production account. It needs to be part of their CI/CD pipeline. The pipeline can assert that the required permissions are valid. If not, the developer can be alerted.

The application, built with AWS Serverless Application Model (AWS SAM) in Python, lists Amazon S3 buckets and receives a file containing the IAM permissions the application needs. For this application, the policy is the following:

A CI/CD pipeline for customers such as Example Corp. spans across multiple accounts. The account structure follows Landing Zone and Control Tower best practices. This example focuses on the following 4 accounts, as seen in the following diagram: 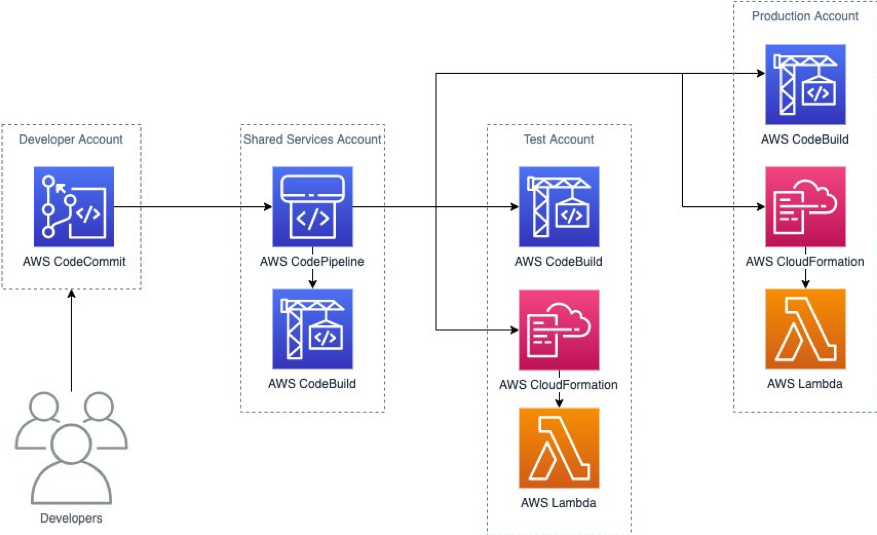 Developers check the code into a CodeCommit repository. It stores all the repositories as a single source of truth for application code. Developers have full control over this account, which is usually used as a sandbox for developers and has permissive policies to allow for fast development.

The shared services account acts as a central location for all the tools related to the organisation, including continuous delivery and deployment services such as AWS CodePipeline and AWS CodeBuild. Applications using the CI/CD orchestration for test purposes are deployed to the test account where CodeBuild runs PyUnit tests over the IAM policies. Those applications are then finally deployed to the production account, in which the automated test suite again runs tests against the IAM policies.

In this solution, the sample code for an AWS Lambda function is checked in to the developer account. This triggers the pipeline (created in CodePipeline in the shared services account) and runs the build using CodeBuild in the shared services account. The pipeline then deploys the Lambda function to the test and production accounts, in which it also tests the permission required to execute with CodeBuild.

The solution consists of:

The application consists of an API gateway that acts as an endpoint for the request and invokes a Lambda function, listing the Amazon S3 buckets available in the production account.

The test_module.py is a PyUnit test module. It contains a unit test class defining the test method. If a permission is not granted, the assertion fails. The test module is invoked by CodeBuild in each of the accounts where the application is deployed.

The test uses the IAM Policy Simulator to validate IAM actions against IAM policies. The simulator evaluates the policies that you choose and determines the effective permissions for each of the actions that you specify. The simulator uses the same policy evaluation engine that is used during real requests to AWS services.

The policy source is the Amazon Resource Name (ARN) of a user, group, or role whose policies you want to include in the simulation. If you specify a user, group, or role, the simulation includes all policies that are associated with that entity. If you specify a user, the simulation also includes all policies that are attached to any groups the user belongs to. The principal is specified in the source.txt file and could be a test IAM user created by the security team.

The action names are in the actions.json file, which contains a list of names of API operations to evaluate in the simulation. Each operation is evaluated for each resource. Each operation must include the service identifier, such as s3:ListBucket.

To run the solution, execute the following steps:

This creates a directory named iam-policy-tester-pipeline in your current directory.

Create a CodeCommit repository in the Development Account and set up AWS CLI if necessary. Name your repository sample-lambda. Alternatively, from your terminal application, execute the following command:

Note the cloneUrlHttp URL in the response from the CLI.

From your terminal application, within the sample-lambda directory, execute the following command:

You need to specify the user, group, or role whose policies you want to include in the simulation. To do this, within the sample-lambda directory, modify the value in scripts/source.txt file.

5. Push the code to CodeCommit

From your terminal application, execute the following commands:

6. Run the script to generate the cross-account pipeline

From your terminal application, back in the iam-policy-tester-pipeline directory, execute the following command:

This last step deploys the entire pipeline. It expects to receive the account numbers to which it will deploy the reference architecture. It creates Amazon S3 buckets for the build artifacts and encryption keys for secure cross-account communication, and sets up CodePipeline, CodeBuild, and CodeDeploy in the account structure described above. After this step, each update in the sample-lambda repository triggers an execution of the pipeline.

To clean up the solution, just delete the AWS CloudFormation stacks in each of the accounts specified in the script.

Example Corp. successfully runs their CI/CD pipeline, deploying their application to production. Recently, they made some updates on the code base and the application failed the test stage in the production account. The Example Corp. developer in charge of the deployment was notified that a ListBucket action failed in the test and was able to remediate the deployment by asking for the security team to investigate the problem. Due to a change in SCPs, a Deny List bucket policy was set in place. Example Corp’s developers were able to test that the role permissions for the application did not work in the target account as part of the pipeline, and are now informed of permission problems and can take remedial actions.

It’s simple to start integrating IAM policy testing into existing CI/CD pipelines. Developers can leverage a testing framework for their language of choice, and add the respective stages in the pipeline to automate the tests in each account. Following the templates in this blog post, developers can avoid hours of manual, retroactive IAM troubleshooting work to deploy to their production environment with a least-privilege approach.

Samuel Waymouth is a Solutions Architect helping SMB customers in the UK use the AWS platform, specializing in Security, Governance and Compliance. He enjoys security research with network intrusion detection systems and machine learning, cookery, motorcycles and martial arts.