In this tutorial, we containerize an ASP.NET application called DNN Platform, which is an open-source .NET content management system built on ASP.NET and SQL Server. For this tutorial, the DNN Platform database layer has been migrated to Amazon Relational Database Service (Amazon RDS).

For this tutorial, you should have:

The tutorial contains the following steps:

Step 1: Create an IAM User and Policy to be used with AWS App2Container

1. Create an IAM user in the AWS Command Line Interface by executing the following command:

2. Create a JSON file containing the IAM Policy that matches either Amazon EKS or Amazon ECS, using the examples on the official documentation.

3. Create the IAM Policy based on the JSON file generated on the step 2. Save the ARN value output to be used in the next step.

4. Attach the IAM policy just created in step 3 to your newly created IAM user by executing the following command:

2. Execute the install.ps1 in an elevated PowerShell session to install AWS App2Container.

Now, AWS App2Container is configured and ready to be used in the application server.

Step 3: Inventory and analyze the application

1. Execute the following command to check if the target application can be containerized by AWS App2Container:

All the IIS Sites capable of being containerized by the tool is displayed. It is important to note that AWS App2Container generated an UID (e.g.: iis-dnn-c5654c20) per application. The UID is used by all the next steps and has an essential role in distinguishing each application.

2. Using the UID generated, analyze the application by executing the following command:

The App2Container analyze command generates an analysis file called analysis.json in the workspace directory that we selected in the application server. The report provides the analysis as well as options to update containerization parameters.

Understanding the analysis file is a crucial step of the entire containerization process. Let’s dive in.

Step 4: Extract and upload the application to Amazon S3

1. Execute the following “extract” command to generate an application archive for the analyzed application with the S3 bucket is the one specified in step 2.3. This contains all the necessary files to build the container image. I used the –output s3 to upload the artifacts to an S3 bucket, which I use in the AWS App2Container worker machine.

Having an AWS App2Container worker machine means that you don’t need to install all the Docker components in your application server to build the Docker image, upload it to Amazon ECR, and generates Amazon ECS/Amazon EKS artifacts. An excellent choice is to use an Amazon EC2 instance based on the Amazon ECS-optimized Windows 2019 Full AMI, which  already includes Docker. If you prefer, you can also deploy the worker machine in an on-premises virtual environment.

Creating the Dockerfile from the scratch isn’t an easy task. You need to write Dockerfiles using multi-stage steps to minimize the number of layers and entry points. AWS App2Container simplifies the container image build process for you by generating a completed Dockerfile.

1. On the AWS App2Container worker machine, execute the following command:

2. Access the workspace directory to see the following directory/files structure:

3. Select the Artifacts directory, which is the context directory that App2Container uses to build the container image.

Note: Directory “DNN” is the IIS Site name that contains all the web application files.

You can see that App2Container selects the base image from the ASP.NET application in the analysis.json file. However, you can edit the base image as needed, while doing this, make sure that the new image matches Container Host OS version.

App2Container also provides two PowerShell scripts as outputs to the “app2container containerize” command, along with an instruction file. The first PowerShell script DomainJoinAddToSecGroup.ps1 joins the container host and adds it to an Active Directory Security Group. The second script CreateCredSpecFile.ps1 creates the gMSA, grants access to the AD security group to retrieve gMSA password, and generates the Docker credspec file.

1. To generate the applications artifacts to be used with Amazon ECS or Amazon EKS, execute the following command:

Open the deployment.json file generated by app2container, there are two parameters:

Modifying the createEKSArtifacts to True, and createEcsArtifcats to false, then app2container generates the Amazon EKS artifacts.

2. Now, in the parent folder, you should be able to see the following files:

2. Confirm if the pod is ready and running. The status should say “1/1” under READY and “running” under STATUS.

3. Via web browser, access the Elastic Load Balancer (ELB) created by the Amazon EKS cluster. This redirects to the Pod where you can access your application. 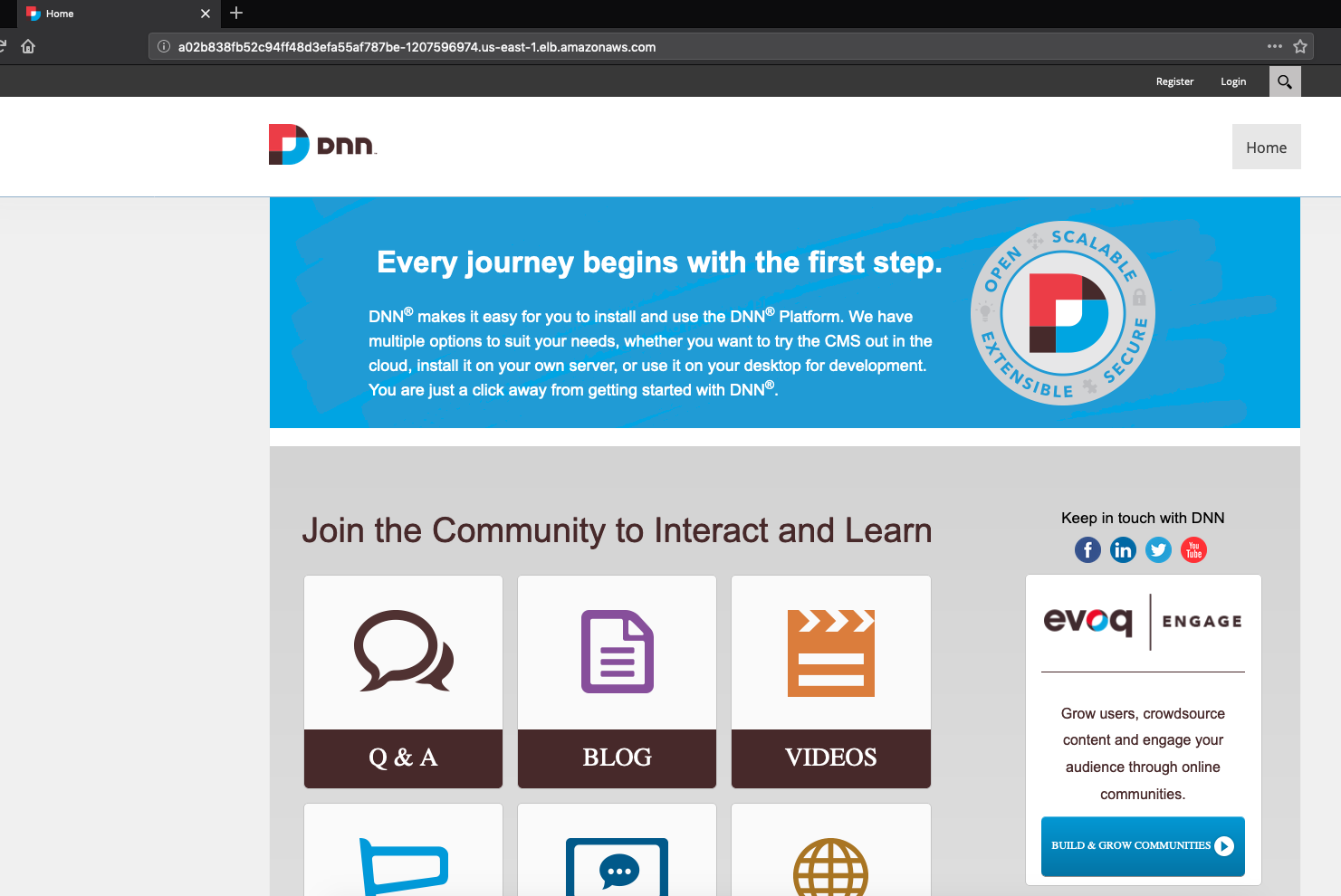 Containerization allows you to unify the infrastructure needed to operate your legacy applications, helping you save on both infrastructure and management costs. Specifically, App2Container helps you containerize these applications and standardize them across a single set of tooling for monitoring, operations, and software delivery.