Training heavy-weight deep neural networks (DNNs) on large datasets ranging from tens to hundreds of GBs often takes an unacceptably long time. Business imperatives force us to search for solutions that can reduce the training time from days to hours. Distributed data-parallel training of DNNs using multiple GPUs on multiple machines is often the right answer to this problem. The main focus of this post is how to do such distributed training using open source frameworks and platforms on Amazon Web Services (AWS).

We will first provide an overview of the key concepts, then walk through the steps required to do distributed TensorFlow training using Kubeflow on EKS. An earlier blog post discussing Kubeflow on EKS offers a broader perspective on this topic.

While many of the distributed training concepts presented in this post are generally applicable across many types of TensorFlow models, to be concrete, we will focus on distributed TensorFlow training for the Mask R-CNN model on the Common Object in Context (COCO) 2017 dataset.

There are three key reasons for selecting the Mask R-CNN model for this post:

A schematic outline of the Mask R-CNN deep neural network (DNN) architecture is shown below:

There are three key challenges to making the synchronized all-reduce algorithm highly efficient:

Uber’s open-source library Horovod was developed to address these challenges:

Horovod is supported with many machine-learning frameworks, including TensorFlow. TensorFlow distribution strategies also leverage NCCL and provide an alternative to using Horovod to do distributed TensorFlow training. In this post, we will use Horovod.

Below we walk through the steps required to do distributed TensorFlow DNN training using Kubeflow in EKS. We will start by creating an EKS cluster, then package code and frameworks into a Docker image, stage the COCO 2017 dataset on an Amazon Elastic File System (Amazon EFS) shared file system and, finally, launch the training job using Kubeflow in EKS.

The first step to enable distributed TensorFlow training using Kubeflow on EKS is, of course, to create an Amazon EKS cluster. There are multiple cloud infrastructure automation options that can be used to do this, including: eksctl, Terraform, etc. Here we will use Terraform. A high-level understanding of Terraform may be helpful, but is not required. To get started, Install Terraform in your build environment. While the latest version of Terraform may work, this post was tested with Terraform v0.12.6.

In the eks-cluster/terraform/aws-eks-cluster-and-nodegroup directory in the accompanying Git repository, create an EKS cluster:

You may specify the Kubernetes version using the k8s_version variable, as shown below, While the latest Kubernetes version is expected to work just as well, this post was developed with version 1.13. The next command requires an Amazon EC2 key pair. If you have not already created an EC2 key pair, create one and substitute the key pair name for <key-pair> in:

You will need the summary output of the terraform apply command you saved in a previous step. In the eks-cluster directory, in the pv-kubeflow-efs-gp-bursting.yaml file, replace <EFS file-system id> with the EFS file system id summary output you saved and replace <AWS region> with AWS region you are using (e.g. us-west-2) and execute:

Check to see that the Persistent Volume was successfully created:

You should see output showing that the Persistent Volume is available.

Next, we need to build a Docker image containing TensorFlow, the Horovod library, the Nvidia CUDA toolkit , the Nvidia cuDDN library, the NCCL library, the Open MPI toolkit, and the Tensorpack implementation of the Mask R-CNN training algorithm code. The Dockerfile used for building the container image uses the AWS deep learning container image as the base image. In the container/build_tools folder, customize the build_and_push.sh shell script for AWS region. By default, this script pushes the image to the AWS region configured in your default AWS CLI profile. You can change that in the script and set the region to us-west-2. Execute:

to build and push the Docker image to Amazon Elastic Container Registry (ECR) in your AWS region.

To use the optimized Mask R-CNN model, use the container-optimized/build_tools folder and customize and execute:

Next, we stage the COCO 2017 dataset needed for training the Mask R-CNN model. In the eks-cluster folder, customize the prepare-s3-bucket.sh shell script to specify your Amazon S3 bucket name in S3_BUCKET variable and execute:

This will download the COCO 2017 dataset and upload it to your Amazon S3 bucket. In the eks-cluster folder, customize the image and S3_BUCKET variables in stage-data.yaml . Use the ECR URL for the Docker image you created in the previous step as the value for image. Execute:

to stage data on the selected Persistent Volume claim for EFS. Wait until the stage-data Pod started by previous apply command is marked Completed. This can be checked by executing:

To verify data has been staged correctly:

You will be attached to a Pod with the mounted EFS Persistent Volume Claim. Verify that the COCO 2017 dataset is staged correctly under /efs/data on the attached Pod. Type exit when you are done verifying the dataset.

Next, we define a Kubeflow MPI Job that is used to launch the Mask R-CNN training job,. We define the Kubeflow MPI Job using a Helm chart. Helm is an application package manager for Kubernetes. Next, we install and initialize Helm.

After installing Helm, initialize it as described below:

You should see following two messages:

Use the ECR URL for the Docker image you created in a preceding step as value for the image. Start the training job by executing the following command in the charts folder:

You can monitor the status of training Pods by executing:

To train the optimized Mask R-CNN model, in charts/maskrcnn-optimized/values.yaml file, customize the image value to the relevant ECR URL and execute:

Use the public DNS address for Tensorboard service and access it in a browser (http://<Tensorboard service dns name>/) to visualize the summaries. Visualization of various algorithm specific metrics through Tensorboard while the Kubeflow job is running allows us to verify that training metrics are converging in the right direction. If training metrics indicate a problem, we can abort the training early. Below, we illustrate Tensorboard graphs from an experiment running the Mask R-CNN training job using Kubeflow on EKS. These graphs show the Mask R-CNN specific algorithm metrics over 24 epochs of training. 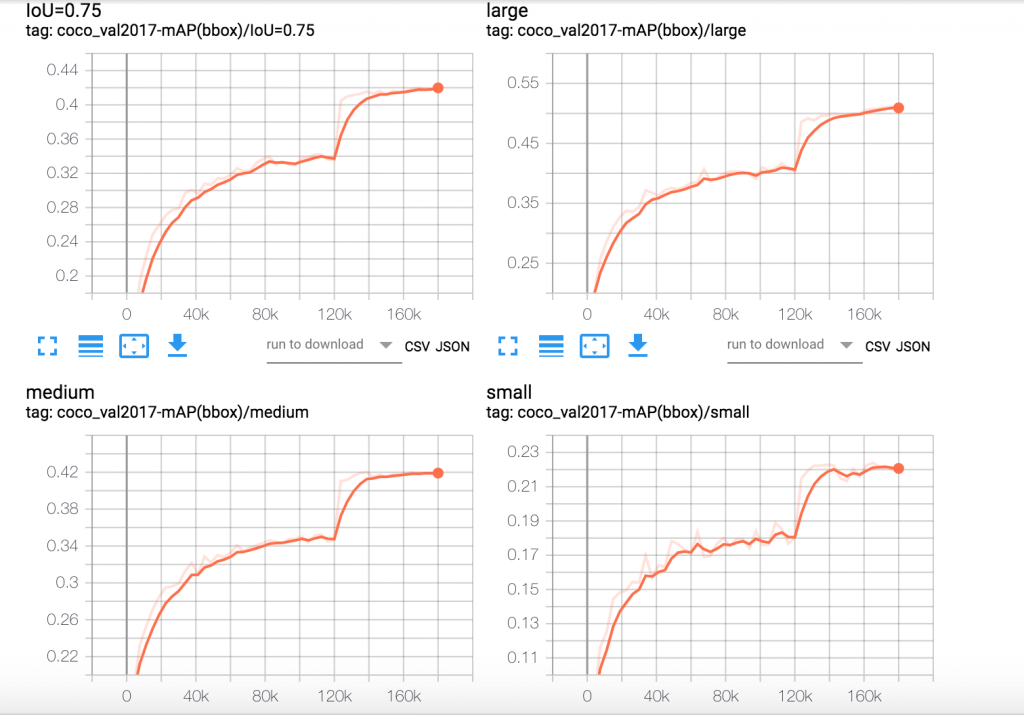 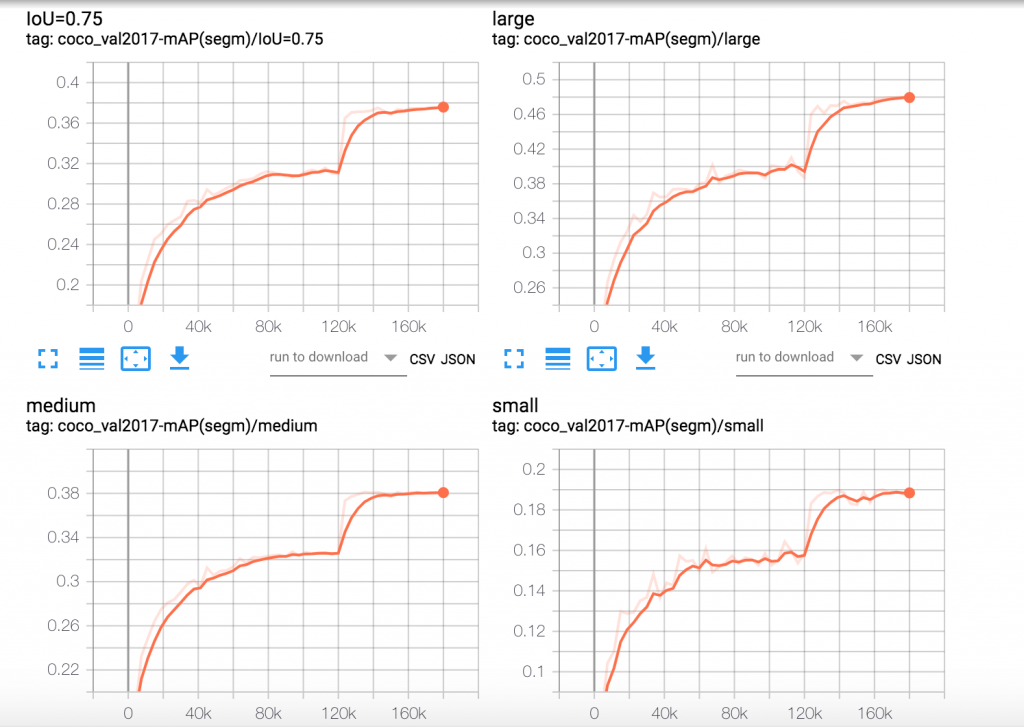 To destroy the EKS cluster and worker node group, execute following command in the eks-cluster/terraform/aws-eks-cluster-and-nodegroup directory, using the same argument values you used in the terraform apply command above:

Kubeflow on Amazon EKS provides a highly available, scalable, and secure machine learning environment based on open source technologies that can be used for all types of distributed TensorFlow training. In this post, we walked through a step-by-step tutorial on how to do distributed TensorFlow training using Kubeflow on Amazon EKS.