Two students had an idea: match excess food with people in need. Maria Rose Belding and Grant Nelson created MEANS, a nonprofit database where people list a donation, food banks and pantries get notified about food near them, and then they claim and pick up the food.

MEANS is now in 49 states and territories and has successfully matched over a million pounds of food in the past two years since launch, helping divert food from the trash to local emergency feeding services with the ease and speed of the internet.

“When we were choosing what tools and platforms to use, we focused on ease of adoption. We wanted to be able to quickly and easily iterate versions,” said Grant, cofounder and founding CTO of MEANS, “AWS makes it easy to get something from an idea on a notepad to actually serving web traffic.”

Dealing with urgency, as the donated food may be someone’s only chance of food for the day, or even the week, availability and reliability were key elements when Maria Rose and Grant were looking to build their nonprofit in the cloud.

MEANS was built out and integrated on AWS using services including Amazon CloudFront for content delivery, Amazon Simple Storage Service (Amazon S3) for storage, Amazon Mechanical Turk (mTurk) for data validation, and Amazon Machine Learning to predict which food pantry they should be calling to maximize the chance of a donation finding a home.

“Most developers are already familiar with AWS toolsets and there is a depth of tutorials available for users. For someone like me who was juggling law school while founding a nonprofit, I built and deployed the database and was able to have a 14% MoM user growth for 18 months straight,” said Grant. With a group of 16 volunteers, the technology side had to be easy so they could focus on wasting less and feeding more. 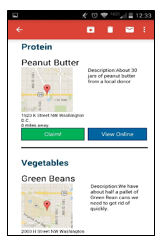 For MEANS, the core job is to distribute information, so the fewer times people have to visit the site the better. Using Amazon CloudFront, MEANS sends out notifications when food is available near you, but only when the food is something you want. When you create an account, you specify how far you are willing to go to get food, and which categories of food you want to be notified about. MEANS’ notification algorithm makes sure that the people most likely to pick up a donation fastest are notified first.

The MEANS team found that many of the phone numbers of the food pantries publicly listed were inaccurate. By using mTurk as well as their volunteers, they were able to build an accurate pantry relationship manager.

Whether it is five pounds of pizza sauce, 250 rutabagas, or 100,000 pounds of lemonade, MEANS uses the AWS Cloud to quickly, easily, and cost-effectively connect food distributors with those in the area most in need.

Reliability and availability – plus scalability

“One of the upsides of AWS is our ability to turn up capacity based on web traffic,” said Maria Rose, Co-Founder and Executive Director of MEANS. “Last year, the Daily Show aired a clip of me filmed by Starbucks’ Upstander Series. When I heard, I was in various stages of joy and panic, but then I remembered that with AWS, all would be fine.”

Learn more about donation made easy with MEANS and how AWS can take your idea from design to implementation.