Securing east-west traffic in service meshes, such as AWS App Mesh, by using mutual Transport Layer Security (mTLS) adds an additional layer of defense beyond perimeter control. mTLS adds bidirectional peer-to-peer authentication on top of the one-way authentication in normal TLS. This is done by adding a client-side certificate during the TLS handshake, through which a client proves possession of the corresponding private key to the server, and as a result the server trusts the client. This prevents an arbitrary client from connecting to an App Mesh service, because the client wouldn’t possess a valid certificate.

The solution described in this blog post simplifies and allows you to automate the configuration and operations of mTLS-enabled App Mesh deployments, because all of the certificates are derived from a single managed private public key infrastructure (PKI) service—ACM Private CA—eliminating the need to run your own private PKI. The solution uses Amazon Elastic Container Services (Amazon ECS) with AWS Fargate as the App Mesh hosting environment, although the design presented here can be applied to any compute environment that is supported by App Mesh.

ACM Private CA provides a highly available managed private PKI service that enables creation of private CA hierarchies—including root and subordinate CAs—without the investment and maintenance costs of operating your own private PKI service. The service allows you to choose among several CA key algorithms and key sizes and makes it easier for you to export and deploy private certificates anywhere by using API-based automation.

App Mesh is a service mesh that provides application-level networking across multiple types of compute infrastructure. It standardizes how your microservices communicate, giving you end-to-end visibility and helping to ensure transport security and high availability for your applications. In order to communicate securely between mesh endpoints, App Mesh directs the Envoy proxy instances that are running within the mesh to use one-way or mutual TLS.

The following sections describe one-way and mutual TLS integrations between App Mesh and ACM Private CA in the context of an example application. This example application exposes an API to external clients that returns a text string name of a color—for example, “yellow”. It’s an extension of the Color App that’s used to demonstrate several existing App Mesh examples.

The two services are mapped onto the following constructs in App Mesh:

Let’s review running the example application in one-way TLS mode. Although optional, starting with one-way TLS allows you to compare the two methods and establish how to look at certain Envoy proxy statistics to distinguish and verify one-way TLS versus mTLS connections.

For practice, you can deploy the example application project in your own AWS account and perform the steps described in your own test environment.

Note: In both the one-way TLS and mTLS descriptions in the following sections, we’re using a flat certificate hierarchy for demonstration purposes. The root CAs are issuing end-entity certificates. The AWS ACM Private CA best practices recommend that root CAs should only be used to issue certificates for intermediate CAs. When intermediate CAs are involved, your certificate chain has multiple certificates concatenated in it, but the mechanisms are the same as those described here.

Because this is a one-way TLS authentication scenario, you need only one Private CA—ColorTeller—and issue one end-entity certificate from it that’s used as the server-side certificate for the ColorTeller virtual node.

Figure 2, following, shows the architecture for this setup, including notations and color codes for certificates and a step-by-step process that shows how the system is configured and functions. Because this architecture uses a server-side certificate only, you use the native integration between App Mesh and ACM Private CA and don’t need an external mechanism for certificate integration. 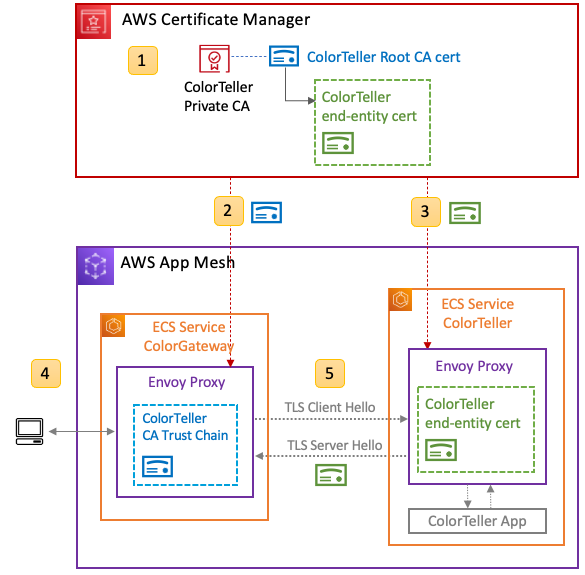 The steps in Figure 2 are: 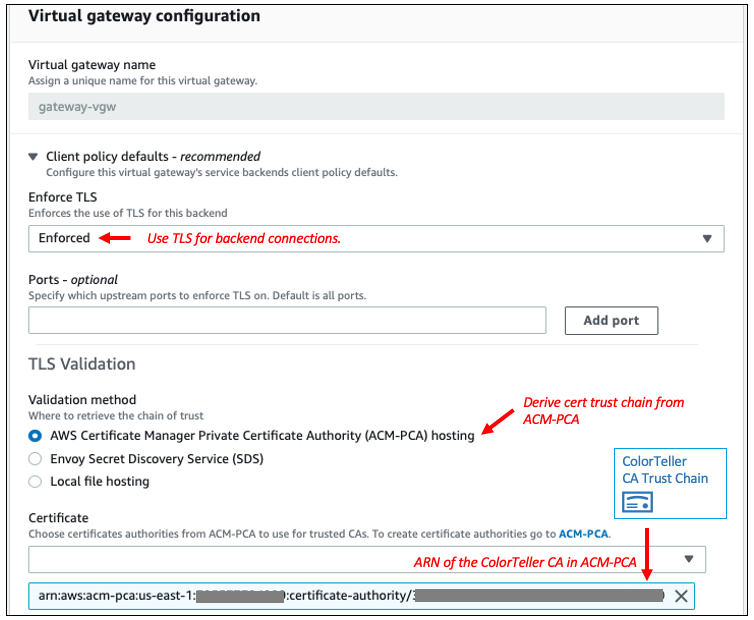 Figure 3: One-way TLS configuration in the client policy of ColorGateway

Figure 3 shows that the client policy attributes for outbound transport connections for ColorGateway have been configured as follows:

This configuration ensures that ColorGateway makes outbound TLS-only connections towards ColorTeller, extracts the CA trust chain from ACM-PCA, and validates the server certificate presented by the ColorTeller virtual node against the configured CA ARN.

The TLS configuration for the ColorTeller virtual node in App Mesh is shown in Figure 4.

Figure 4 shows that various TLS-related attributes are configured as follows:

Note: Figure 4 shows an annotation where the certificate ARN has been superimposed by the cert icon in green color. This icon follows the color convention from Figure 2 and can help you relate how the individual resources are configured to construct the architecture shown in Figure 2. The cert shown (and the associated private key that is not shown) in the diagram is necessary for ColorTeller to run the TLS stack and serve the certificate. The exchange of this material happens over the internal communications between App Mesh and ACM Private CA.

Step 4: The ColorGateway service receives a request from an external client.

To verify that a TLS connection was established and that it is one-way TLS authenticated, run the following command on your bastion host:

The preceding statistics verify that a TLS handshake was completed and the authentication was one-way, where the ColorGateway authenticated the ColorTeller but not vice-versa. You’ll see in the next section how the ssl.no_certificate count differs when mTLS is enabled.

In the one-way TLS discussion in the previous section, you saw that App Mesh and ACM Private CA integration works without needing external enhancements. You also saw that App Mesh retrieved the server-side end-entity certificate in ColorTeller and the root CA trust chain in ColorGateway from ACM Private CA internally, by using the native integration between the two services.

The choice of Lambda is based on this being an ephemeral workflow that needs to run only during system configuration. You need a short-lived, runtime compute context that lets you run the logic for exporting certificates from ACM Private CA and store them in Secrets Manager. Because this compute doesn’t need to run beyond this step, Lambda is an ideal choice for hosting this logic, for cost and operational effectiveness.

The resulting architecture is shown in Figure 5. The figure includes notations and color codes for certificates—such as root certificates, endpoint certificates, and private keys—and a step-by-step process showing how the system is configured, started, and functions at runtime. The example uses two CA hierarchies for ColorGateway and ColorTeller to demonstrate an mTLS setup where the client and server belong to separate CA hierarchies but trust each other’s CAs. 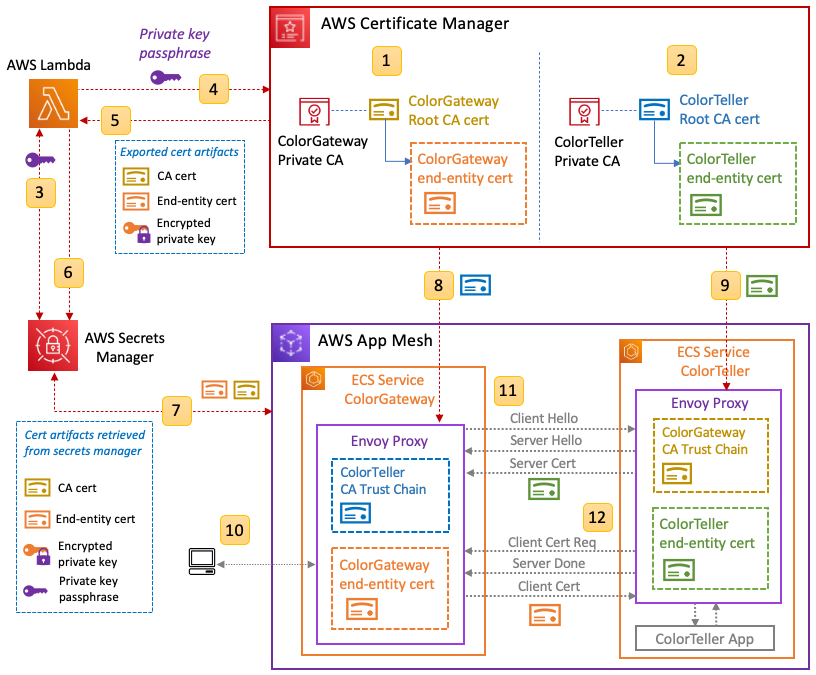 The numbered steps in Figure 5 are:

Step 4: The Lambda function issues an export certificate request to ACM, requesting the ColorGateway end-entity certificate. The request conveys the private key passphrase retrieved from Secrets Manager in the previous step so that ACM Private CA can use it to encrypt the private key that’s sent in the response.

Step 5: The ACM Private CA responds to the Lambda function. The response carries the following elements of the ColorGateway end-entity certificate.

Step 7: The App Mesh services—ColorGateway and ColorTeller—are started, which then start their Envoy proxy containers. A custom startup script embedded in the Envoy docker image fetches a certificate from Secrets Manager and places it on the Envoy file system.

Note: App Mesh publishes its own custom Envoy proxy Docker container image that ensures it is fully tested and patched with the latest vulnerability and performance patches. You’ll notice in the example source code that a custom Envoy image is built on top of the base image published by App Mesh. In this solution, we add an Envoy startup script and certain utilities such as AWS Command Line Interface (AWS CLI) and jq to help retrieve the certificate from Secrets Manager and place it on the Envoy file system during Envoy startup.

Step 8: The CloudFormation scripts configure the client policy for mTLS in ColorGateway in App Mesh, as shown in Figure 6. The following attributes are configured: 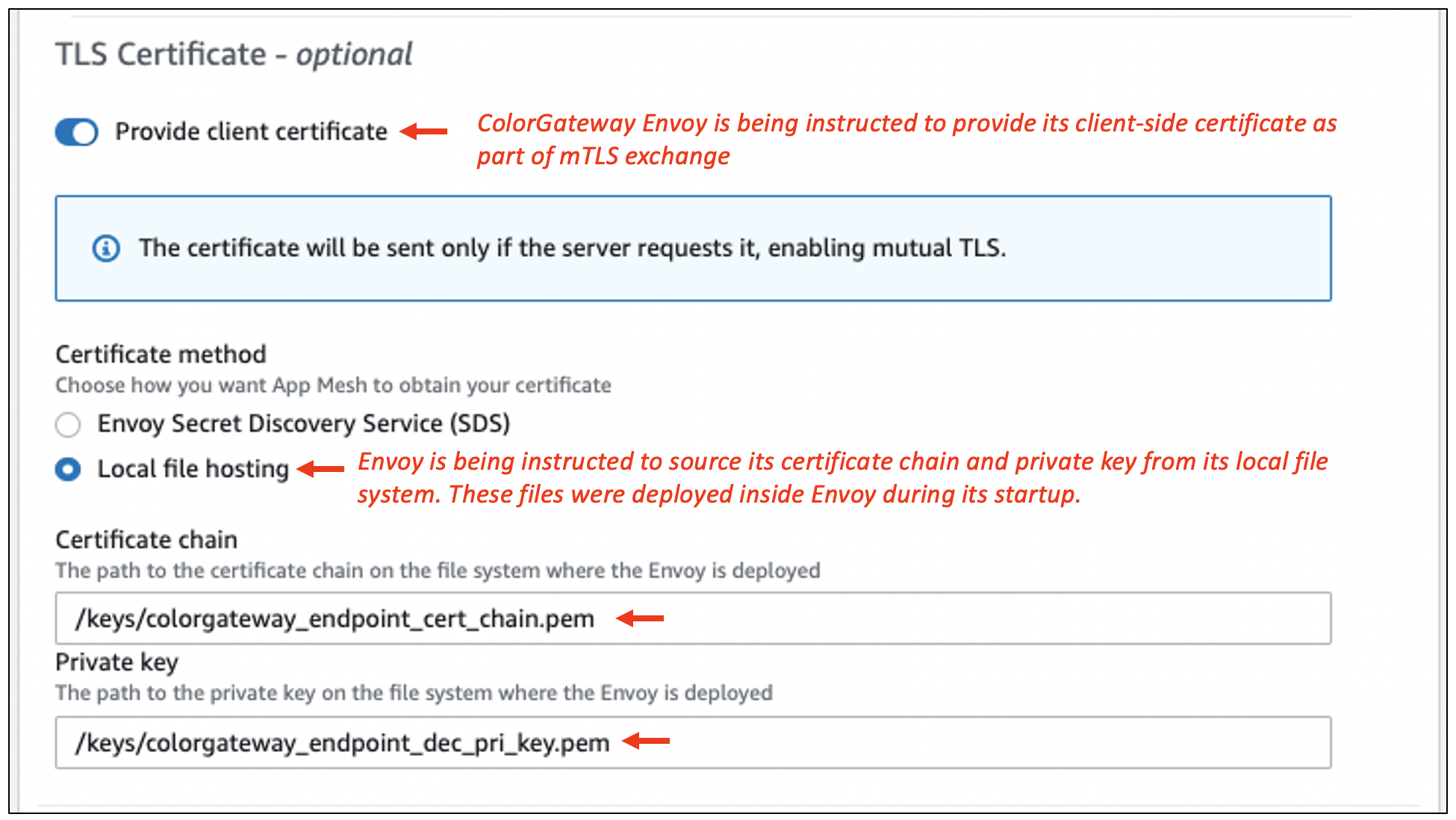 At the end of the custom Envoy startup script described in step 7, the core Envoy process in ColorGateway service is started. It retrieves the ColorTeller CA root certificate from ACM Private CA and configures it internally as a trusted CA. This retrieval happens due to native integration between App Mesh and ACM Private CA. This allows ColorGateway Envoy to validate the certificate presented by ColorTeller Envoy during the TLS handshake.

Step 9: The CloudFormation scripts configure the listener configuration for mTLS in ColorTeller in App Mesh, as shown in Figure 7. The following attributes are configured:

At the end of the Envoy startup script described in step 7, the core Envoy process in ColorTeller service is started. It retrieves its own server-side end-entity certificate and corresponding private key from ACM Private CA. This retrieval happens internally, driven by the native integration between App Mesh and ACM Private CA. This allows ColorTeller Envoy to present its server-side certificate to ColorGateway Envoy during the TLS handshake.

The system startup concludes with this step, and the application is ready to process external client requests.

Step 10: The ColorGateway service receives a request from an external client.

Step 12: During the second half of the TLS handshake, the ColorTeller Envoy requests the ColorGateway Envoy to provide its client-side certificate. This step is what distinguishes an mTLS exchange from a one-way TLS exchange.

You can now verify that an mTLS exchange happened by running the following command on your bastion host.

The count for ssl.handshake should be one. If the ssl.handshake count is more than one, that means that you’ve gone through more than one TLS handshake. It’s important to note that the count for ssl.no_certificate—the total successful TLS connections with no client certificate—is zero. This shows that mTLS configuration is working as expected. Recall that this count was one or higher—equal to the ssl.handshake count—in the previous section that described one-way TLS. The ssl.no_certificate count being zero indicates that this was an mTLS authenticated connection, where the ColorGateway authenticated the ColorTeller and vice-versa.

The certificate renewal mechanism can be broken down into six steps, which are outlined in Figure 8. 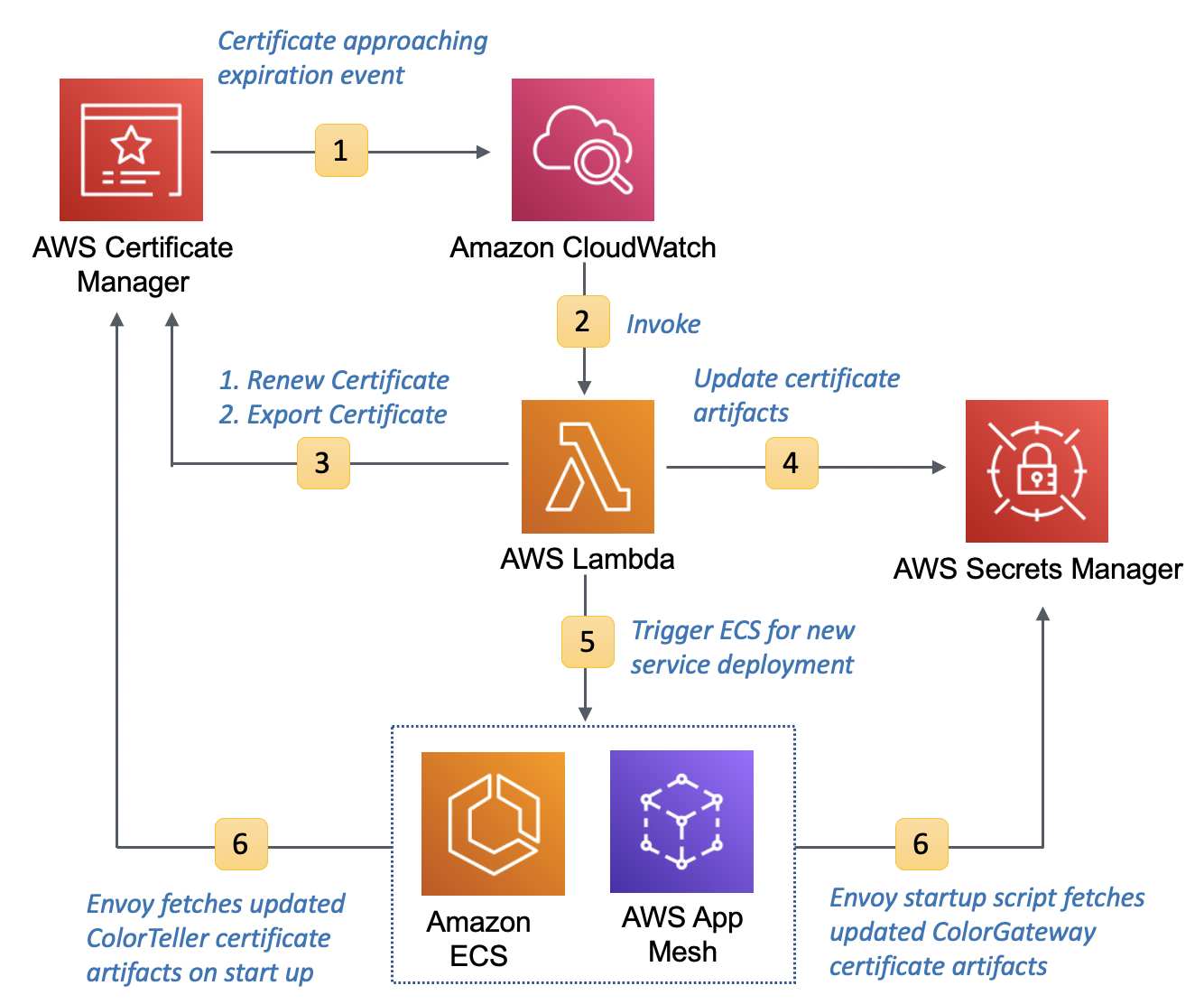 Here are the steps illustrated in Figure 8:

Step 1: ACM generates an Amazon CloudWatch Events event when a certificate is close to expiring.

Step 2: CloudWatch triggers a Lambda function that is responsible for certificate renewal.

Step 3: The Lambda function renews the certificate in ACM and exports the new certificate by calling ACM APIs.

Step 4: The Lambda function writes the certificate to Secrets Manager.

Step 5: The Lambda function triggers a new service deployment in an Amazon ECS cluster. This will cause the ECS services to go through a graceful update process to acquire a renewed certificate.

This solution enhances your App Mesh security posture by simplifying configuration of mTLS-enabled App Mesh deployments. It achieves this because all mTLS certificate requirements are met by a single, managed private PKI service—ACM Private CA—which allows you to centrally manage certificates and eliminates the need to run your own private PKI.